I’m very sorry to lose her because she is great 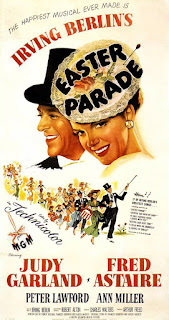 Following their successful collaboration on The Pirate (1948), Gene Kelly and Judy Garland were to star together again in Charles Walters' Easter Parade (1948). Before filming began, however, Kelly broke his ankle and Fred Astaire —in retirement after Blue Skies (1946)— was asked to replace him (at Kelly's suggestion). Anxious to come out of retirement and to work with Judy, Astaire didn't hesitate for a moment to accept the role. While filming Easter Parade,  he and Judy got along famously and proved to be a wonderful match. Astaire later recalled: "Of course, Judy was the star of the picture. And it's a joy to work with somebody like Judy, because she's a super talent, with a great sense of humor. She could do anything. She wasn't primarily a dancer, but she could do what you asked her to do .... [Our numbers together] remain with me as high spots of enjoyment in my career. Judy's uncanny knowledge of showmanship impressed me more than ever as I worked with her."
Easter Parade was a big success, both critically and commercially. While the film was still in production, producer Arthur Freed was already working on a new project, The Barkleys of Broadway (1949) —also to be directed by Charles Walters— and again he wanted Astaire and Garland to play the leads. Astaire was elated to be working with Judy again and vice versa ("Fred put me completely at ease. He's a gentleman— and lots of fun to work with."). But while Judy was in great spirits during Easter Parade, after two weeks of rehearsals on The Barkleys her health —both physical and emotional— deteriorated and she kept calling in sick. Finally, on 18 July 1948, Judy was removed from The Barkleys and put on suspension.
MGM needed a last-minute replacement for Judy Garland and contacted Ginger Rogers to see if she was available and interested in working with Astaire again. The two had worked together for six years and done nine films together (all for RKO) but with the 1939 The Story of Vernon and Irene Castle their partnership had ended. There had been rumours that the couple didn't part amicably, that they had been fighting and didn't even get along. These rumours, however, have always been denied by both Fred and Ginger. About their relationship Ginger said in her 1991 memoir Ginger: My Story: "Fred and I were colleagues, and despite occasional snits... we worked together beautifully ... we had fun, and it shows. True, we were never bosom buddies off the screen; we were different people with different interests." Delighted to be working with Fred again, Ginger accepted the role and, not having danced in years, worked very hard to get back into shape. Ginger's hard work eventually paid off, her dancing in The Barkleys being as good as ever (especially during the wonderful Bouncin' the Blues, one of my favourite Astaire-Rogers dance numbers; watch here). 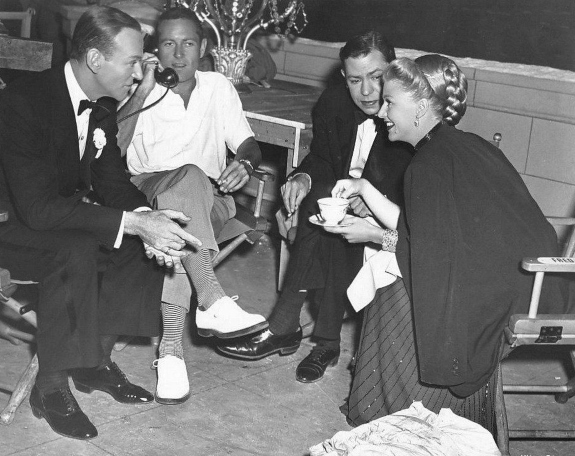 In his autobiography Steps in Time (1959) Fred Astaire looked back on his re-pairing with Ginger Rogers with great fondness. However, others working on The Barkleys (including choreographer Hermes Pan) recalled a lack of enthusiasm in Astaire, who felt they were trying to get back something that couldn't be recaptured. In Brent Philips' biography Charles Walters: The Director Who Made Hollywood Dance (2014), Walters is quoted as saying: "It came as quite a shock to find out that Mr. Astaire was not too keen about Miss Rogers ... They got along well, [but] Fred complained about her incessantly ... He would say, for example, that he couldn't stand a woman who was taller than he was ... [Fred could be] a real nag."
What seems certain is that Astaire had been terribly disappointed when Judy Garland dropped out of The Barkleys. Ginger Rogers also mentioned it in her memoir and even claimed Fred had a crush on Judy: "On the first day of work, I went down to the rehearsal hall to see Fred. He was sweet and friendly, but I could see he was slightly disappointed. I had learned that Judy Garland had originally been signed as his co-star. They'd just worked together on Easter Parade and I knew Fred had a slight crush on her." And Astaire's stand-in Joe Niemeyer commented: "I've never seen him as happy as he was during the making of Easter Parade. It's a wonderful story and a wonderful picture. But to him, the joy came from working with Judy, a girl whose own sense of timing and comedy and perfection is as intense as his. With Judy, the film was nothing but play [for him]."
After their collaboration on The Barkleys fell through, Fred Astaire and Judy Garland got another chance to work together, this time on Royal Wedding (1951) when June Allyson dropped out due to pregnancy. But again, it was not to be. Once production on the film had started, Judy again kept calling in sick and was eventually fired from the film and replaced with Jane Powell. Easter Parade would remain Fred and Judy's only collaboration.
_____
Below is a small fragment of a letter, dated 1 August 1948, which Fred Astaire wrote to his good friend Jack Leach, jockey and trainer of horses. (Astaire had a passion for horseracing and Leach trained horses owned by Astaire). The segment deals with Judy Garland dropping out of The Barkleys and Ginger Rogers replacing her, with Fred clearly disappointed over the loss of Judy.
If you're interested in reading the entire letter, which mostly deals with the subject of horses, click on the source link below the image. 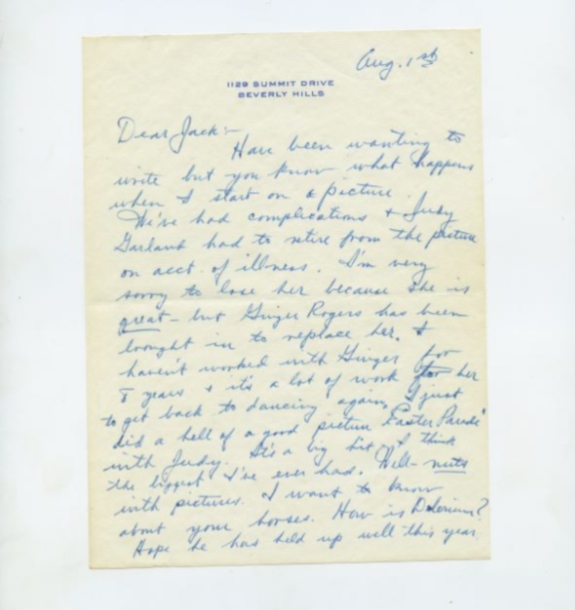 Source: National Horse Racing Museum
Transcript:
August 1st [1948]
Dear Jack:-
Have been wanting to write but you know what happens when I start on a picture.
We’ve had complications & Judy Garland had to retire from the picture on acct. of illness. I’m very sorry to lose her because she is great – but Ginger Rogers has been brought in to replace her. I haven’t worked with Ginger for 8 years & it’s a lot of work for her to get back to dancing again. I just did a hell of a good picture “Easter Parade” with Judy. It’s a big hit, I think the biggest I’ve ever had. Well – nuts with pictures I want to know about your horses. How is Delerium? Hope he has held up well this year.
Posted by Clarissa Saunders
Tags: Easter Parade, Fred Astaire, Ginger Rogers, Judy Garland, The Barkleys Of Broadway