In 1959, Marilyn Monroe and Tony Curtis shared a kissing scene in Billy Wilder's comedy Some Like It Hot and afterwards Curtis made his infamous remark about Marilyn, that kissing her was "like kissing Hitler". Throughout the years, when interviewed about the subject, Curtis kept denying he had made the remark. His constant denial seems strange, given the fact that there were multiple witnesses who heard him say it.

The now notorious line was uttered by Curtis when he and others were watching the rushes of the kissing scene in the screening room. Co-star Jack Lemmon and still photographer Richard Miller were among those present and describe the incident in the 2001 documentary Nobody's perfect: The Making of Some Like It Hot (watch in full here). After the rushes had ended, Curtis stood up and made the Hitler comment, causing everybody in the room to fall silent. While shocked when he heard it, in the docu Lemmon 'defends' Curtis, saying "he didn't really mean it, of course", and that if he (Lemmon) had said it he'd probably deny it too. At that point Marilyn was impossible to work with, unable to remember even the simplest of lines, requiring numerous retakes, and always showing up late or not showing up at all. Curtis was clearly fed up with her (as was the rest of the cast and crew) and, according to Richard Miller, he was also mad at Marilyn for having refused to kiss him during rehearsal. (Billy Wilder wanted to rehearse the kiss so the cameraman could check the lighting etc., but Marilyn wouldn't kiss Curtis until they were shooting the actual scene.)

Towards the end of his life, Curtis finally admitted to making the vicious remark. In his 2009 memoir The Making of Some Like It Hot: My Memories of Marilyn Monroe and the Classic American Movie, co-written by Mark Vieira and published a year before Curtis' death, the actor implied it wasn't serious but meant sarcastically: "The lights came up. I had to leave. On my way out, some guy whom I didn’t recognize called out to me. "Tony," he said. "That was terrific. Hey. Tell me. What was it like kissing Marilyn?" I didn’t stop to acknowledge him. I kept walking. "What do you think it was like, buddy?" I got to the door. "Like kissing Hitler?" I went through the door and slammed it after me".

Film critic Mick LaSalle argued in this interesting article (and I think his argument makes a lot of sense) that if Curtis had really meant to be sarcastic, he wouldn't have chosen Hitler but someone else, like Milton Berle for example. LaSalle said that "Hitler may be a reference point, but not for ugliness or physical revulsion. He's a reference point for moral horror, for someone you really, really hate". 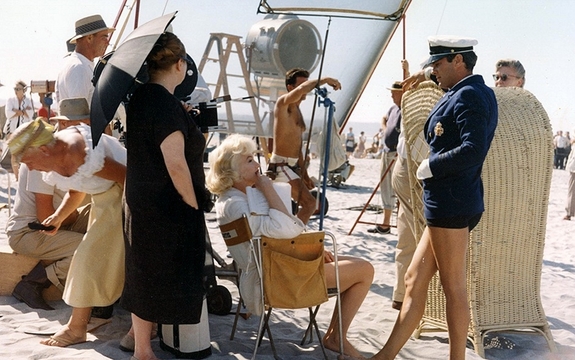 Marilyn herself was not in the screening room to hear Curtis say it but her drama coach and confidante Paula Strasberg was. Whether Marilyn heard it from Strasberg or from someone else, the remark got back to her and she would later comment on it in a 1962 interview.

.... You’ve read there was some actor that once said about me that kissing me was like kissing Hitler. Well, I think that’s, you know, his problem. And if I really have to do intimate love scenes with an individual who really has these kind of feelings towards me, then my fantasy can come into play. In other words, out with him, in with somebody else. There was somebody else there, not him. He was never there. [To hear Marilyn say the words, go here.]

It is believed that the following note from Marilyn was also a reaction to Curtis' Hitler remark. Moreover, the note contradicts the claims that Curtis would make decades after Marilyn's death of having been romantically involved with her. In his 2008 memoir American Prince, Curtis said they had an affair before Marilyn became famous. And in his 2009 book he went even further, claiming they rekindled the affair during Some Like It Hot and that she got pregnant with hís child, not Arthur Miller's (i.e. the child she later miscarried). While Marilyn wasn't alive anymore to deny what sounds like a fantastical story, this one-line note, handwritten by Marilyn, seems to refute Curtis' claims. As said, the note was reportedly written in response to the "kissing Hitler" remark. 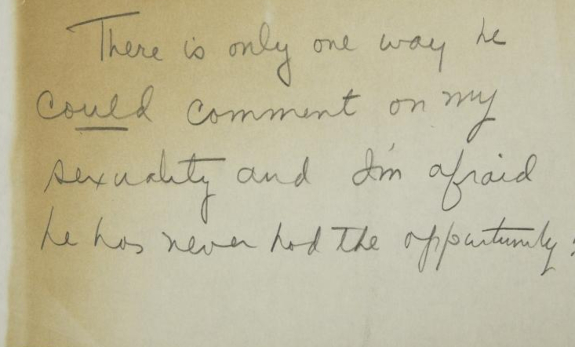 There is only one way he could comment on my sexuality and I'm afraid he has never had the opportunity.

Posted by Clarissa Saunders No comments:
Tags: Marilyn Monroe, Some Like it Hot, Tony Curtis

Bette Davis' advice: Every human being should be self-supporting

In 1943, Bette Davis had her own advice column "What Should I Do?" in the popular fan magazine Photoplay-Movie Mirrror. Numerous letters were written to the Hollywood diva asking her advice, in particular on love and relationships. Here is a letter from housewife Patricia J., which appeared in the July 1943 issue. Patricia was wondering if she should get a job, like her husband wanted, and learn to be self-supporting. Seeing that Bette herself was an independent career woman, her advice to Patricia should come as no surprise.

I am a bride of six months and have a very dear husband. We love each other deeply. He has had a very difficult life as he has worked since he was fourteen. Now, he has a rather important job and we get along very nicely on his salary.

After two months of marriage, he brought up the subject of a wife’s being independent. He wants me to go to school and to learn to be something. He says that he has seen so many changes concerning work that he feels a woman should be able to share in supporting a home, if need be.

I love being a housewife and I know I would be very unhappy if I had to go to work. I like to cook, and clean, and have my home attractive. How can a woman keep up with household duties when she has to go off to the office? I told him a girl marries to have someone to depend on.

Do you believe a woman has to learn to be self-supporting?

I happen to agree with your husband.

I think that every human being should be self-supporting. Who knows what the future may bring, or of what great value trained women may be in the post-war world.

I, personally, have a pretty big job to do, yet I manage to do lots of things in my own home in spare time snatched after working hours.

It seems to me that you are fortunate to have the sort of husband you do. After all, housework for the first six months is fun, but after four or five years of it you won’t find it satisfies you all day, every day.

Also, I believe you will find that learning to become self-supporting will bring something new and very interesting into your life. 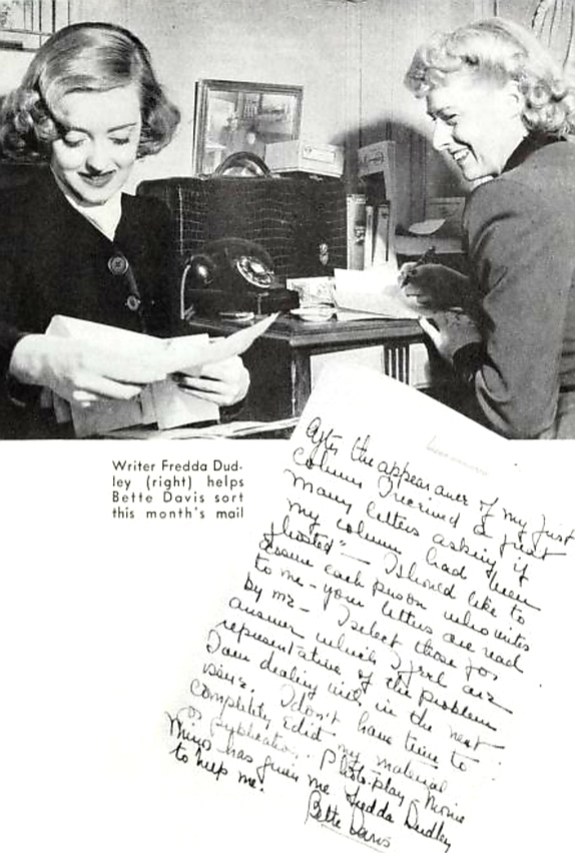 After the appearance of my first column I received a great many letters asking if my column had been "ghosted" -- I should like to assure each person who writes to me - your letters are read by me - I select those for answer which I feel are representative of the problems I am dealing with in the next issue. I don't have time to completely edit my material for publication. Photoplay- Movie Mirror has given me Fredda Dudley to help me.
Bette Davis
Posted by Clarissa Saunders 2 comments:
Tags: Bette Davis

Nearly twenty years after the release of John Ford's The Grapes of Wrath (1940), John Steinbeck, author of the novel on which the film was based, sat down and played a 16 mm print of the film on his home projector. Reluctant to watch the film again for fear it would be dated, Steinbeck was immediately hooked at the sight of Henry Fonda: "Then a lean stringy dark-faced piece of electricity walked out on the screen, and he had me. I believed my own story again". Producer Darryl Zanuck had initially wanted to cast Tyrone Power but Fonda was Steinbeck's first choice from the start, his portrayal of Tom Joad being everything the author had hoped for. 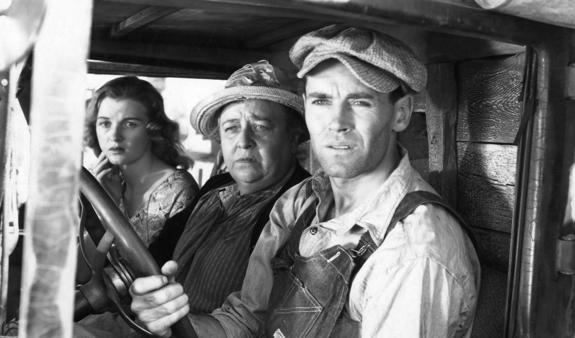 At the time of his rewatching The Grapes of Wrath, Steinbeck was working on what may have been a modern version of the famous Don Quixote story, which he titled Don Keehan, The Marshal of Manchon. The author had high hopes for the project and thought of Henry Fonda as the lead in a possible film version with Elia Kazan directing. In the following letter to Fonda, written on 20 November 1958, Steinbeck told the actor he was writing the book with him in mind. In the end, however, the project was abandoned and Fonda never played a Steinbeck character again. 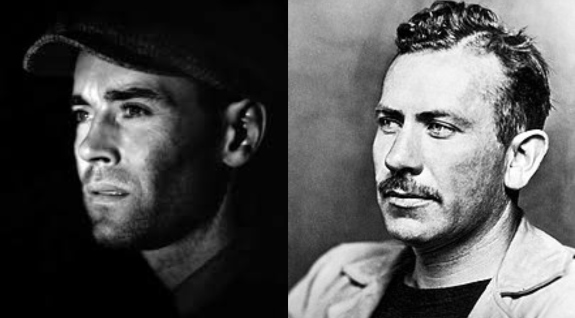 It is strange but perhaps explainable that I find myself very often with a picture of you in front of my mind, when I am working on a book. I think I know the reason for this. Recently I ran a 16 mm print of The Grapes of Wrath that Kazan had stolen from Twentieth Century Fox. It's a wonderful picture, just as good as it ever was. It doesn't look dated, and very few people have ever made a better one — and I think that's where you put your mark on me. You will remember also that when I was writing Sweet Thursday* I had you always in mind as the prototype of Doc. And I think that one of my sharp bitternesses is that due to circumstances personality-wise and otherwise beyond our control you did not play it when it finally came up. I think it might have been a different story if you had.

Now I am working on another story, and again I find that you are the prototype. I think it might interest you. It will be a short novel and then possibly a motion picture, possibly a play — I don't know. But it's just the character and the story that remind me so much of you that I keep your face and figure in mind as I write it. I don't know whether you're in town or not — but if you are I wish you'd come over some evening, and maybe we can talk. I'd like that very much. And you might be very much interested in the story I am writing. It seems made for you. In fact it's being made for you — let's put it that way.


Note*
Steinbeck's Sweet Thursday was a short novel which was made into the musical Pipe Dream, written by Richard Rogers and Oscar Hammerstein. The musical premiered on Broadway in November 1955. Steinbeck discussed the part of Doc with Fonda who was interested to play it. As Fonda couldn't sing, he took singing lessons but after six months he said he "still couldn't sing for shit". Richard Rogers thought so too and the role eventually went to William Johnson, a regular Broadway actor/singer. Pipe Dream became a flop as well as a financial debacle for Rogers and Hammerstein.