Presenting Gone with the Wind 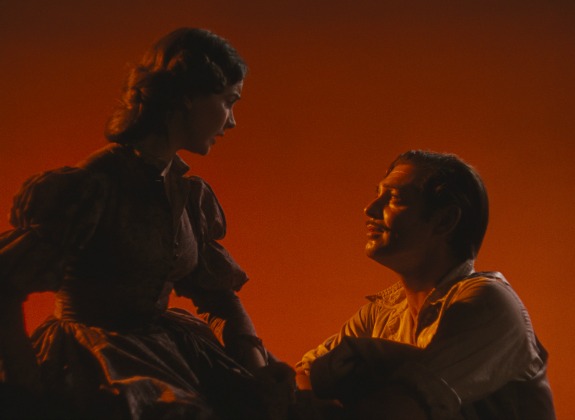 When Gone with the Wind was released in December 1939, it was first exhibited in a roadshow format. Roadshow films were generally lengthy, epic films (with components like an overture, intermission and exit-music after the film) and were shown in beautiful, selected theatres in the bigger cities before they were released nationwide. For the public, the experience was much like attending a theatrical play with tickets being sold in advance at a premium price. Tickets to GWTW costed no less than 75 cents for a screening during the day --twice the price of a regular feature film-- and $1 in the evening. It wasn't until 1941 that GWTW went into general release at normal prices. 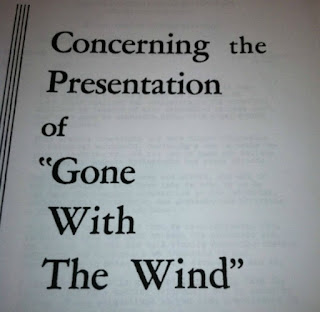 Concerned with the way GWTW would be presented in theatres during the roadshow run, producer David O. Selznick wrote to the theatres' exhibitors urging them to present GWTW in the best way possible. Selznick's letter was accompanied by a set of instructions regarding matters like the exact moment when to open or close the curtains, when to dim the house lights etc.. These GWTW presentation instructions essentially formed the basis for other roadshow presentations for the next few decades. Below you will find Selznick's instructions in full, preceded by his letter. (This presentation booklet was sent to the exhibitors along with the film print.) 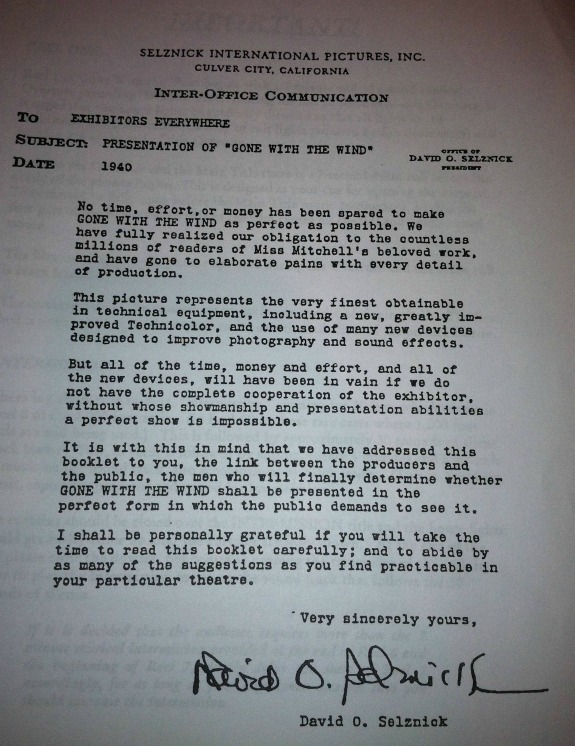 SUBJECT: PRESENTATION OF "GONE WITH THE WIND"

No time, effort, or money has been spared to make GONE WITH THE WIND as perfect as possible. We have fully realized our obligation to the countless millions of readers of Miss Mitchell's beloved work, and have gone to elaborate pains with every detail of production.

This picture represents the very finest obtainable in technical equipment, including a new, greatly improved Technicolor, and the use of many new devices designed to improve photography and sound effects.

But all of the time, money and effort, and all of the new devices, will have been in vain if we do not have the complete cooperation of the exhibitor, without whose showmanship and presentation abilities a perfect show is impossible.

It is with this in mind that we have addressed this booklet to you, the link between the producers and the public, the men who will finally determine whether GONE WITH THE WIND shall be presented in the perfect form in which the public demands to see it.

I shall be personally grateful if you will take the time to read this booklet carefully; and to abide by as many of the suggestions as you find practicable in your particular theatre. 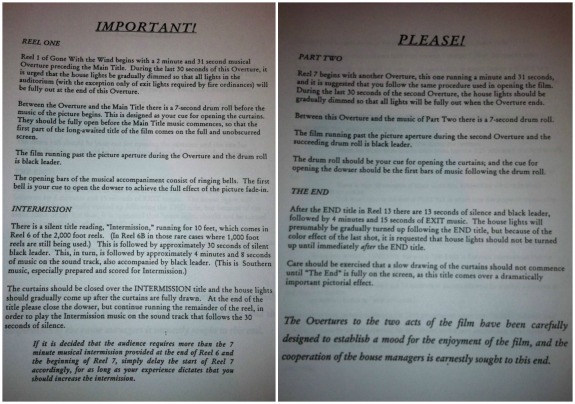 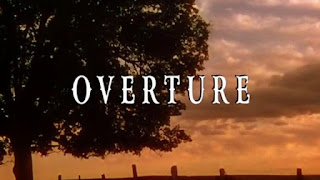 Reel one of Gone With the Wind begins with a 2 minute and 31 second musical Overture preceding the Main Title. During the last 30 seconds of this Overture, it is urged that the house lights be gradually dimmed so that all lights in the auditorium (with the exception only of exit lights required by fire ordinances) will be fully out at the end of this Overture.

Between the Overture and the Main Title there is a 7-second drum roll before the music of the picture begins. This is designed as your cue for opening the curtains. They should be fully open before the Main Title music commences, so that the first part of the long-awaited title of the film comes on the full and unobscurred [sic] screen.

The film running past the picture aperture during the Overture and the drum roll is black leader.

The opening bars of the musical accompaniment consist of ringing bells. The first bell is your cue to open the dowser to achieve the full effect of the picture fade-in. 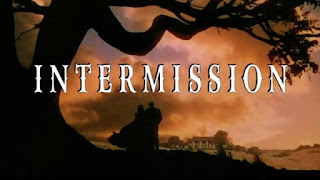 There is a silent title reading, "Intermission", running for 10 feet, which comes in Reel 6 of the 2,000 foot reels. (In Reel 6b in those rare cases where 1,000 foot reels are still being used.) This is followed by approximately 30 seconds of silent black leader. This, in turn, is followed by approximately 4 minutes and 8 seconds of music on the sound track, also accompanied by black leader. (This is Southern music, especially prepared and scored for Intermission.)

The curtains should be closed over the INTERMISSION title and the house lights should gradually come up after the curtains are fully drawn. At the end of the title please close the dowser, but continue running the remainder of the reel, in order to play the Intermission music on the sound track that follows the 30 seconds of silence.

If it is decided that the audience requires more than the 7 minute musical intermission provided at the end of Reel 6 and the beginning of Reel 7, simply delay the start of Reel 7 accordingly, for as long as your experience dictates that you should increase the intermission.

Reel 7 begins with another Overture, this one running a minute and 31 seconds, and it is suggested that you follow the same procedure used in opening the film. During the last 30 seconds of the second Overture, the house lights should be gradually dimmed so that all lights will be fully out when the Overture ends.

Between this Overture and the music of Part Two there is a 7-second drum roll.

The film running past the picture aperture during the second Overture and the succeeding drum roll is black leader. 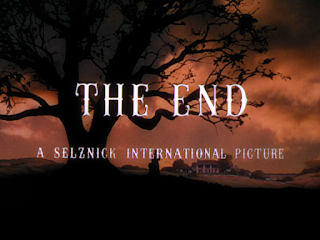 Care should be exercised that a slow drawing of the curtains should not commence until "The End" is fully on the screen, as this title comes over a dramatically important pictorial effect.

The Overture to the two acts of the film have been carefully designed to establish a mood for the enjoyment of the film, and the cooperation of the house managers is earnestly sought to this end.