I'm sorry to have to tell you I'm hopelessly normal

By the summer of 1950, Judy Garland was overworked, dependent on pills and had already suffered a few nervous breakdowns. Her marriage to director Vincente Minelli was in serious trouble and would ultimately end in divorce in 1951. Despite having completed successful films like Easter Parade (1948) and In the Good Old Summertime (1949), Judy was largely discussed in the press in connection with her failures. She had been fired from The Barkleys of Broadway (1949), Annie Get Your Gun (1950) and Royal Wedding (1950) —due to her showing up late to the set and at times not showing up at all— to be eventually replaced by resp. Ginger Rogers, Betty Hutton and Jane Powell.

When the movie fan magazine Motion Picture announced in its June 1950 issue that Judy's film career was over, this not only evoked many reactions from her fans but also from the actress herself. Tired of all the negative gossip and the incorrect assumption that she was quitting films, Judy sent a letter to Motion Picture editor Maxwell Hamilton, assuring him that everything was okay and that soon she was to star as Julie in Show Boat. Judy's letter was published in Motion Picture in September 1950, the same month she and MGM parted ways after fifteen years. Of course the role of Julie LaVerne in Show Boat (1951) eventually went to Ava Gardner.

While her film career wasn't over, from then on Judy would only make a handful of films, most notably A Star Is Born (1954) and Judgment at Nuremberg (1961). Sadly her problems continued and a barbiturate overdose ultimately led to her untimely death (at age 47) on 22 June 1969.

This is the introductory text to Judy Garland's letter in Motion Picture (it's obvious that the magazine already considered Judy a has-been star), followed by the letter itself.

In the June issue of Motion Picture, we published some pretty ugly, but well-founded, rumors about Judy Garland, to the effect that she would never make another picture. Judy denied our story and, on her own behalf, wrote us the letter printed on these pages, a letter we felt —and we told Judy so— was one of the frankest, most honest we've ever received from a star. Then, on June 20th, came the shocking news that Judy had attempted to take her life. We still think you'll want to read this dramatic letter, written, as we know it must have been, while Judy was under the strongest of emotional strains. For, to us, it paints a vivid picture of Judy Garland, the one picture which perhaps shows Judy as the truly beloved star she certainly has been. 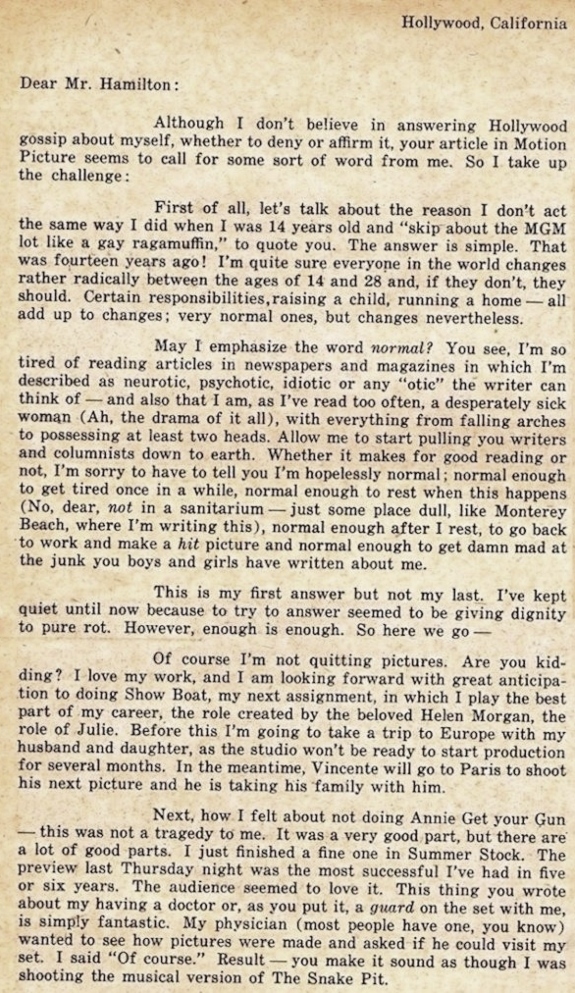 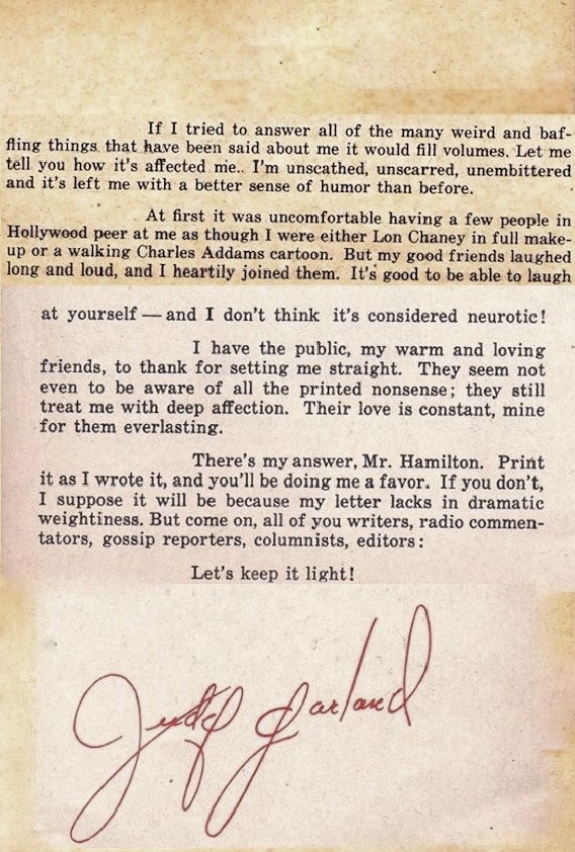