You must destroy this Svengali before it destroys you

Starting with Clash By Night (1952) Marilyn Monroe refused to film a scene unless her acting coach Natasha Lytess was present on the set. Marilyn had met Lytess in the spring of 1948 when the latter was still head drama coach at Columbia. The two women first worked together on Ladies of the Chorus (1948) and continued their collaboration through The Seven Year Itch (1955). Extremely insecure about her acting abilities, Marilyn relied heavily upon Lytess, asking for her approval after each take. If Lytess disapproved, Marilyn would request another take and often ended up doing numerous takes. Needless to say, directors were not happy with the interference from Lytess. She was often banned from the set (for example by Otto Preminger and Roy Baker on respectively River of No Return and Don't Bother to Knock) but would always be reinstated as Marilyn wouldn't shoot without her. 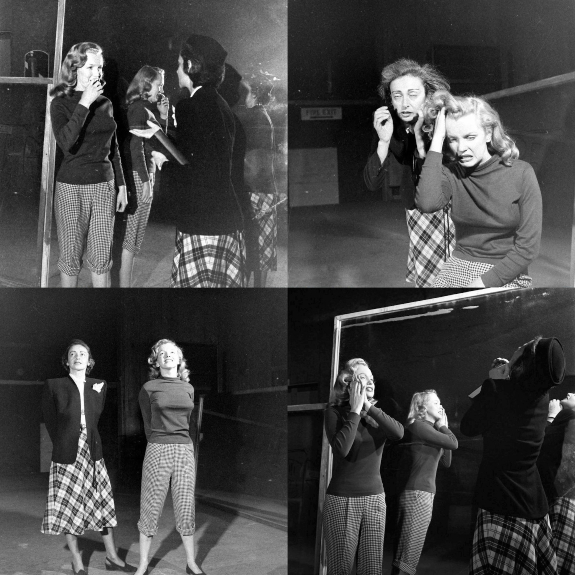 Darryl Zanuck, studio head of 20th Century-Fox, was very unhappy with the Marilyn-Lytess situation. Before Don't Bother To Knock (1952) went into production, he received a request from Marilyn to have Lytess on the set with her. Zanuck responded by letter, saying it was "completely impractical and impossible" and "how ludicrous it would be if every actor or actress felt that they needed special coaching from the sidelines". But despite Zanuck's letter to Marilyn (as seen below), Lytess was not only present on the set of Don't Bother To Knock but also on the sets of Marilyn's subsequent films. With Marilyn quickly becoming one of 20th Century-Fox's biggest box-office draws, directors and co-workers had no choice but to put up with Lytess' interference. In 1955, after disapproving of Marilyn's relationship with Joe DiMaggio, Lytess was replaced with Paula Strasberg who, much to everybody's annoyance, continued to coach Marilyn on the set.

Your request to have a special dialogue director work with you on the set is a completely impractical and impossible request. The reason we engage a director and entrust him to direct a picture is because we feel that he has demonstrated his ability to function in that capacity. Whether the final performance comes out right or wrong there cannot be more than one responsible individual and that individual is the director. You must rely upon his individual interpretation of the role. You cannot be coached on the sidelines or the result will be a disaster for you.

In Asphalt Jungle you had a comparatively simple part, in which you were very effective, but it did not particularly call for any acting as compared to the role you are going to play at the present time. It is more than ever important that you therefore place yourself completely in the hands of the director -- or ask to be relieved from the role.

I am sure you realize how ludicrous it would be if every actor or actress felt that they needed special coaching from the sidelines. The result would be bedlam, and whatever creative ideas the director might possess would be lost or totally diffused.

I think you are capable of playing this role without the help of anyone but the director and yourself. You have built up a Svengali and if you are going to progress with your career and become as important talent-wise as you have publicity-wise then you must destroy this Svengali before it destroys you. When I cast you for the role I cast you as an individual. 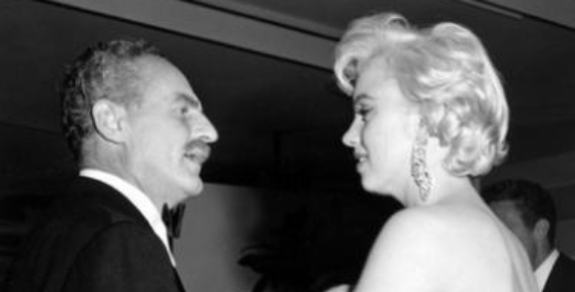 I don't honestly like the feeling of the film

Today's letter enticed me to watch Love Among the Ruins (1975), a film made especially for television, directed by George Cukor and starring Katharine Hepburn and Laurence Olivier in their only film together. It's a charming film about an ageing actress who, after having been sued for breach of promise, hires a lawyer with whom she was romantically involved some 40 years ago; although she doesn't remember him, he has been in love with her ever since. 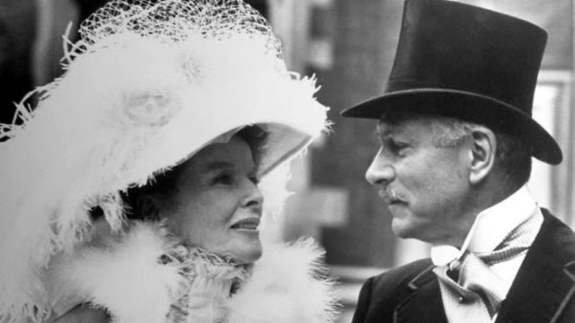 What makes the film so delightful are the great performances by the leads, in particular by Laurence Olivier whom I loved in this role. Both Hepburn and Cukor wanted Olivier as the male lead from the start but Olivier wasn't interested in the project at all, as his letter to Cukor dated 27 November 1973 indicates (seen below). According to an interesting Emanuel Levy article, Hepburn and Cukor tried to persuade Olivier to accept the role by writing him a long letter back, asking several questions: "Do you find the relationship–thus cast–not interesting? Do you find it not funny? Do you find it too trivial? Would there be any particular thing which could make you do it, and if so, what? Say it's just hopeless, and we will both blow our brains out." Adding more pressure Cukor then jokingly mentioned their greatest individual failures: "What a combo! The star of Romeo and Juliet; the girl who was so successful in The Lake; and the director–fresh from his success–of Gone With the Wind. Irresistible!". To this Olivier had no defense and finally accepted.

Love Among the Ruins was a huge success, receiving seven Emmy Awards including awards for Cukor, Hepburn and Olivier. 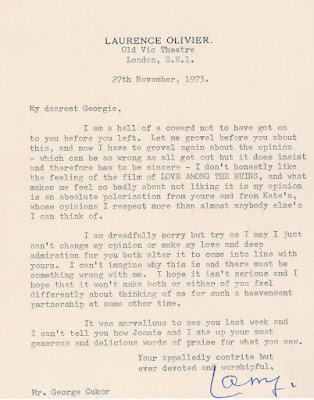 I am a hell of a coward not to have got on to you before you left. Let me grovel before you about this, and now I have to grovel again about the opinion - which can be as wrong as all get out but it does insist and therefore has to be sincere - I don't honestly like the feeling of the film of LOVE AMONG THE RUINS, and what makes me feel so badly about not liking it is my opinion is an absolute polarization from yours and from Kate's, whose opinions I respect more than almost anybody else's I can think of.

I am dreadfully sorry but try as I may I just can't change my opinion or make my love and deep admiration for you both alter it to come into line with yours. I can't imagine why this is and there must be something wrong with me. I hope it isn't serious and I hope that it won't make both or either of you feel differently about thinking of me for such a heavensent partnership at some other time.

It was marvellous to see you last week and I can't tell you how Joanie [Plowright] and I ate up your most generous and delicious words of praise for what you saw.

Your appalledly contrite but ever devoted and worshipful, 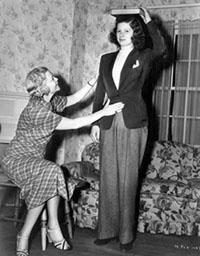 Lela Rogers, mother of Ginger Rogers, was not your typical stage mom. Apart from managing Ginger's career, Rogers had a successful career in her own right. She was a journalist, editor, screenwriter and producer, and from the mid-1930s through the early 1940s she worked as an assistant to Charles Koerner, Vice-President of Production at RKO. Put in charge of RKO's budding talent, Rogers ran her own workshop on the studio lot called the Little Theatre, where she trained promising young actresses like Betty Grable, Joan Fontaine, Ann Miller and Lucille Ball.


In her autobiography Love, Lucy (1996), Lucille Ball fondly remembered those early days at RKO with Lela Rogers: "It was such a busy, happy time for me. Lela took the dungarees off us and put us into becoming dresses; she ripped off our hair bands and made us do our hair right. If we went to see a big producer in his office, she cautioned us to put on full makeup and look like somebody. She made us read good literature to improve our English and expand our understanding of character. She drummed into us how to treat agents and the bosses upstairs... "

Ball studied with Rogers for two years and would later give Rogers credit for turning her into the actress she became. Rogers was the first person to recognise Ball's potential as a comedienne ("a clown with glamour" she called her) even when RKO producer Pandro Berman had told her not to waste her time on Ball. Rogers also stood up for Ball when RKO wouldn't renew her contract and she was responsible for getting Ball a few of her early roles, e.g her first speaking role in Top Hat (1935) as well as her role in Stage Door (1937), the latter being Ball's first standout role. 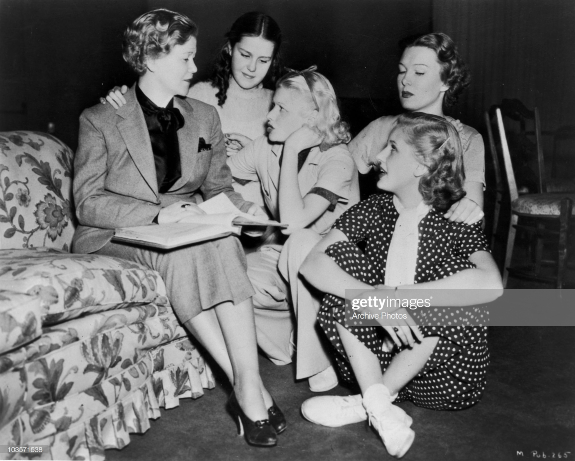 During two years Ball worked with Rogers in her Little Theatre, rehearsing and performing plays which attracted large crowds at 25 cents a ticket. The shows were a terrific opportunity for Ball and others to showcase their talent, especially since directors, producers and critics were often present in the audience. One of the plays produced and directed by Rogers at the Little Theatre was Fly Away Home in January 1936. Ball participated in the play, after which Rogers wrote her the following letter to thank her for taking part. Rogers called Ball's performance "excellent", her praise undoubtedly giving a boost to the young actress' ego. 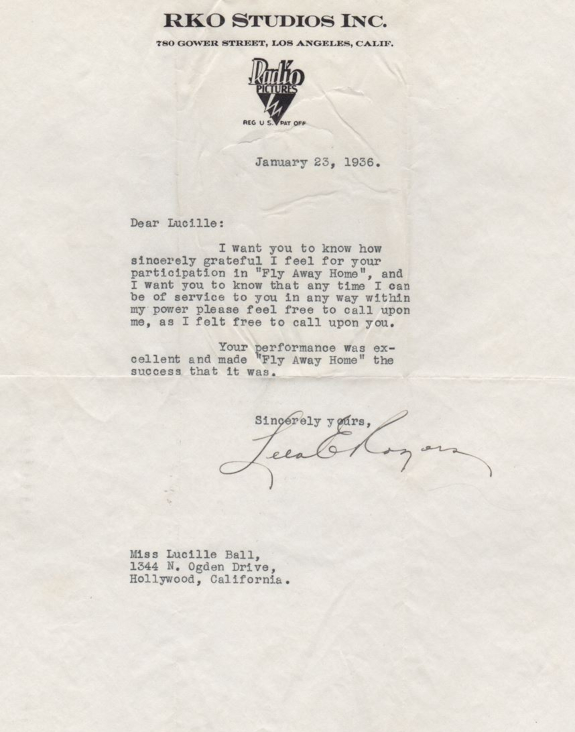 Your performance was excellent and made "Fly Away Home" the success that it was.