Unlike most of her peers, Barbara Stanwyck never signed a long-term contract with one studio. In the early 1930s, she signed a non-exclusive contract with Columbia and at the same time also had a non-exclusive contract with Warner Brothers. (Her early films for Columbia include Forbidden (1932) and The Bitter Tea of General Yen (1933), and for Warners she made among others Night Nurse (1931), So Big! (1932) and Baby Face (1933).) When Barbara's contracts with both studios ended, she decided not to renew them but to become a free agent instead. Freelancing gave Barbara more freedom to choose her own projects, allowing her to work with every major director and studio in Hollywood. Apart from having control over the films she made, freelancing also brought her more money. By 1943, Barbara had become the highest paid woman in the United States. 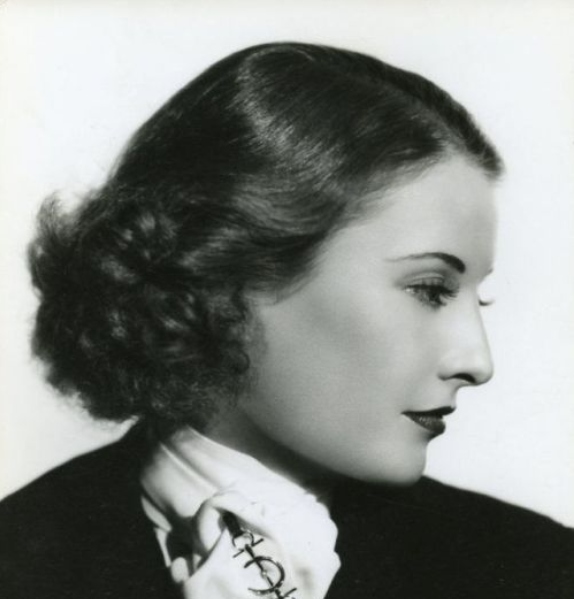 Barbara returned to Warner Bros. in the early 1940s, again signing a non-exclusive contract and making (among others) The Gay Sisters (1942), Christmas in Connecticut (1945) and My Reputation (1946). Her contract with Warners was eventually terminated in 1948, following a dispute involving the film adaptation of Ayn Rand's novel The Fountainhead. Barbara was a fan of Ayn Rand and had asked Jack Warner to buy the rights to the novel for her, which Warner did in late 1943. Due to WWII, however, production of the film was delayed, and Warner finally decided to cast newcomer Patricia Neal as the female lead instead of Barbara. (Warner had just signed Neal to a seven-year contract and was committed to making her a star.) "Bitterly disappointed" about Jack Warner's decision, Barbara sent him a telegram on 21 June 1948, informing him she wanted to end her contract with the studio. Warner replied by letter the following day.

DEAR JACK: A COUPLE OF YEARS HAVE GONE BY SINCE I MADE A FILM FOR YOU AND SINCE THEN I AM SURE YOU WILL AGREE THAT THE SCRIPTS SUBMITTED TO ME HAVE NOT COMPARED WITH "THE FOUNTAINHEAD." I READ IN THE MORNING PAPERS TODAY YOUR OFFICIAL ANNOUNCEMENT THAT MISS PATRICIA NEAL IS GOING TO PLAY THE ROLE OF "DOMINIQUE" IN "THE FOUNTAINHEAD." AFTER ALL, JACK, IT SEEMS ODD AFTER I FOUND THE PROPERTY, BROUGHT IT TO THE ATTENTION OF THE STUDIO, HAD THE STUDIO PURCHASE THE PROPERTY, AND DURING THE PREPARATION OF THE SCREENPLAY EVERYONE ASSUMED THAT I WOULD BE IN THE PICTURE, AND NOW I FIND SOMEONE ELSE IS DEFINITELY PLAYING THE ROLE. NATURALLY, JACK, I AM BITTERLY DISAPPOINTED. HOWEVER, I CAN REALISTICALLY SEE YOUR PROBLEMS, AND CERTAINLY BASED ON ALL OF THESE CIRCUMSTANCES, IT WOULD APPEAR TO BE TO OUR MUTUAL ADVANTAGE TO TERMINATE OUR PRESENT CONTRACTUAL RELATIONSHIP. I WOULD APPRECIATE HEARING FROM YOU. KINDEST PERSONAL REGARDS.

I have your telegram of the twenty-second and, while I know you brought The Fountainhead to [Henry] Blanke's attention, I want to make it very clear to you that we have a huge Story Department here in the Studio as well as in New York, that covers every book, periodical, etc.

The Fountainhead was called to the attention of our studio through the regular channels. I personally knew about it long before you suggested it to Mr. Blanke, and we were considering it for purchase and subsequently closed for it.

Naturally your interest in this property is well understood, but our studio does not confine its operations to cases where people bring in books or other stories and we buy them solely on their suggestion. It operates through regular channels, and did in this case as in most cases.

However, since our actions have offended you and you desire to terminate your contract with us, it may be that under the circumstances this would be the best thing to do.

It is with regret that I accede to your request and, if you will have your agent or attorney get in touch with our Legal Department here at the studio, the formalities of terminating your contract can be arranged.

This post is my contribution to the THE SECOND REMEMBERING BARBARA STANWYCK BLOGATHON, hosted by IN THE GOOD OLD DAYS OF CLASSIC HOLLYWOOD and MADDY LOVES HER CLASSIC FILMS. Be sure to check out all the other entries too!

John Ford's My Darling Clementine is often regarded as one of Ford's best films and one of the greatest Westerns of all time. Released in December 1946, the film is a retelling of events leading up to the legendary gunfight at the OK Corral. The film as we know today, however, is not the version Ford himself had in mind. In late June 1946, 20th Century-Fox studio head Darryl F. Zanuck saw Ford's cut and while he liked parts of it, his overall impression was that it was too long and needed serious editing. Zanuck edited the film himself without Ford's interference (like he had done with other Ford films, i.e. The Grapes of Wrath (1940) and How Green Was My Valley (1941)) and ultimately removed 30 minutes from Ford's version while also adding and changing scenes. 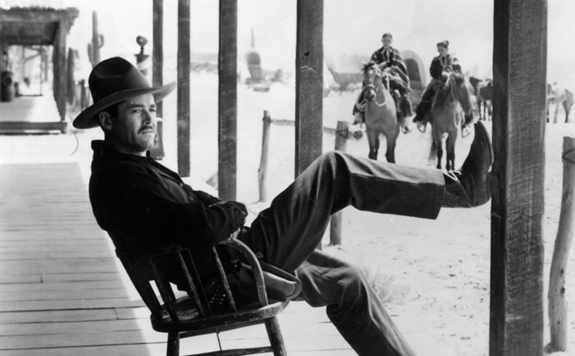 Probably the most significant change that Zanuck made to Ford's version was the ending. In the original cut, Wyatt Earp (Henry Fonda) and Clementine (Cathy Downs) say goodbye with a friendly shake of the hand. While Zanuck himself liked the ending, preview audiences hated it. And so, having invested $2 million in the film, Zanuck had a kiss inserted in the final scene: Earp kisses Clementine on the cheek before shaking her hand. (Henry Fonda and Cathy Downs were called back to film the kiss in the studio, months after shooting had already wrapped.)

In the following memo, written on 4 September 1946, Zanuck informed the film's producer and co-screenwriter Samuel Engel about his decision to change Ford's ending and to add the kiss.

Insomuch as I am flying East in the morning I thought you should have this note in case you wish to show it to Jack Ford and Henry Fonda.

I like the ending of My Darling Clementine exactly as it is. It is completely satisfactory to me from every standpoint. Unfortunately 2,000 people who saw the picture at a preview did not agree. You were present at the preview and you know what happened and you have read the preview cards.

I would like to ridicule the mental attitude of the audience at this preview but you must remember that this is the same audience which applauded the quality of the picture in its earlier sequences....

Therefore it is difficult for me to ignore their request for a more satisfying or satisfactory conclusion to the film. Furthermore, let us be frank. This audience accepted and tremendously enjoyed every moment of the picture but they laughed at us at the finish.

You will recall that the last scene was perfect up to where Fonda reaches out to shake hands with Cathy Downs. It was such an obvious buildup for a kiss or for some demonstration of affection that the audience felt first amused and then completely cheated...

I do feel that it will be honest, legitimate and reasonable if Henry looks at the girl, smiles, leans over and kisses her on the cheek. It is a good-bye kiss and nothing more. He does like her. The audience knows he likes her. Now is no time for us to get smart.

Believe me we need the picture in New York. I detest going back for this scene as much as anybody. But I actually think that it is absolutely essential that we avoid spoiling the last moment of an outstanding picture and we certainly spoiled it for the audience that saw it at the preview. 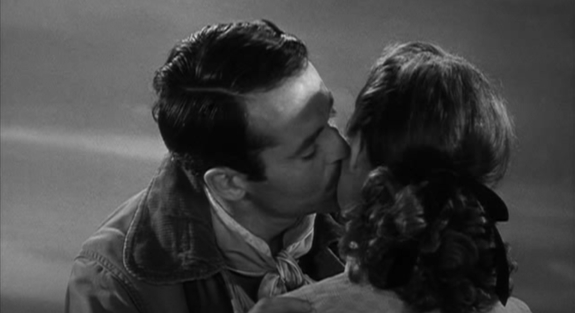 To start the new year on a positive note, here are two lovely letters from respectively Rosalind Russell and Fred Astaire, written in late 1964 to Audrey Hepburn. As discussed in an earlier post, Audrey was devastated about not getting an Oscar nomination for her portrayal of Eliza Doolittle in My Fair Lady (1964). Several months before the nominations were announced, however, she must have been very pleased to receive these letters from Rosalind Russell and Fred Astaire, praising her for her performance. Russell wrote her letter on 13 October 1964, while Astaire's letter is undated but presumably written circa December 1964. 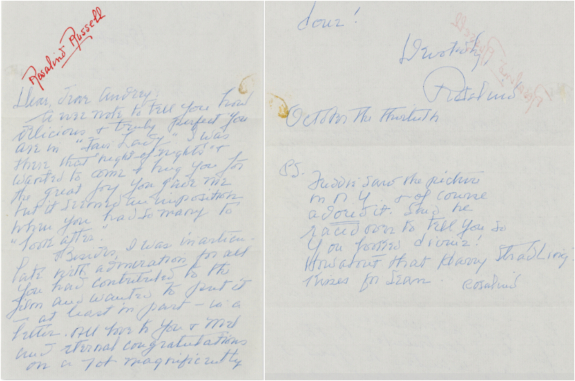 A wee note to tell you how delicious + truly perfect you are in "Fair Lady." I was there that "night of nights" + wanted to come + hug you for the great joy you gave me but it seemed an imposition where you had so many to "look after".

Besides, I was inarticulate with admiration for all you had contributed to the film and wanted to put it -at least in part- in a letter. All love to you + Mel and eternal congratulations on a job magnificently done!

*PS. Freddie saw the picture in N.Y.+ of course adored it. Said he raced over to tell you so
You looked divine!
How about that Harry Stradling?
Kisses for Sean.
Rosalind
Notes
-Freddie was most likely Frederick Brisson, Russell's husband- the only man she was ever married to (from 1941 until her death in 1976).
-Harry Stradling was My Fair Lady's cinematographer and won an Oscar for his work.
-Sean was Audrey's son by Mel Ferrer, whom Audrey was married to from 1954 until 1968. 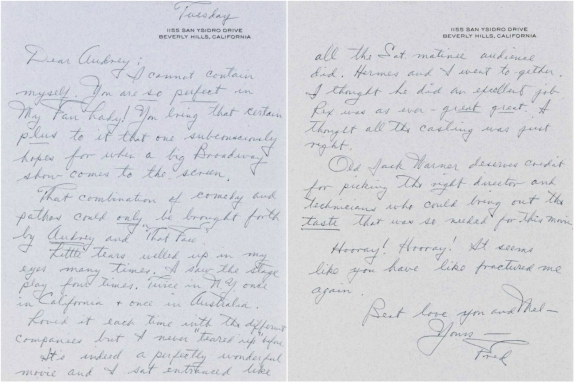 I cannot contain myself. You are so perfect in My Fair Lady! You bring that certain plus to it that one subconsciously hopes for when a big Broadway show comes to the screen.

That combination of comedy and pathos could only be brought forth by Audrey and "That Face".

Little tears welled up in my eyes many times. I saw the stage play four times. Twice in N.Y. once in California & once in Australia.

Loved it each time with the different companies but I never "teared up" before.

It's indeed a perfectly wonderful movie and I sat entranced like all the Sat. matinee audience did. *Hermes [Pan] and I went together. I thought he did an excellent job. Rex [Harrison] was as ever - great great. I thought all the casting was just right.

Old Jack Warner deserves credit for picking the right director and technicians who could bring out the taste that was so needed for this movie.

Best love you and Mel-

Yours -
Fred
Note
-Hermes Pan was responsible for the choreography on My Fair Lady. Pan and Astaire were good friends and had worked together on a great many films including Astaire's films with Ginger Rogers. 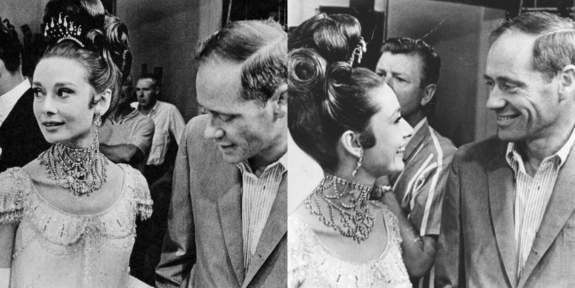