Producer David O. Selznick was a perfectionist. Not only did he strive to always get the best cast and crew possible, but he also involved himself in every aspect of the film making process (this led to fights with many a director). His biggest hit came with the 1939 Gone with the Wind, and the rest of his career Selznick spent trying to match or even outdo GWTW's success. One of his films Selznick had high hopes for was Duel in the Sun, starring Gregory Peck, Jennifer Jones (who was to be Selznick's second wife) and Joseph Cotten. Although the film could by no means live up to the success of GWTW, it did end up being a major box-office hit as well as being the second highest grossing film of 1947. For the part of Jesse in Duel in the Sun Selznick also wanted to get the best man possible, in his opinion Joseph Cotten. Cotten, however, wasn't interested, whereupon Selznick wrote him an eight-page letter trying to persuade him to accept the role. Unfortunately, I only have the first and last part of the letter to show you, but it will give you an idea of how determined Selznick was to get Cotten aboard. In the excerpt below Selznick tells Cotten to have faith in his judgment, like many others had before him. To make his case, Selznick mentions Claudette Colbert as an example. Colbert initially didn't want to play the leading role in Since You Went Away (1944) in which she had to be mother to adolescent daughters Jennifer Jones and Shirley Temple. After her initial misgivings, however, Colbert decided to accept the role and afterwards "was happier about it than with any other picture or any other role in her career."

Written on 8 February 1945, this is the first part of Selznick's letter. 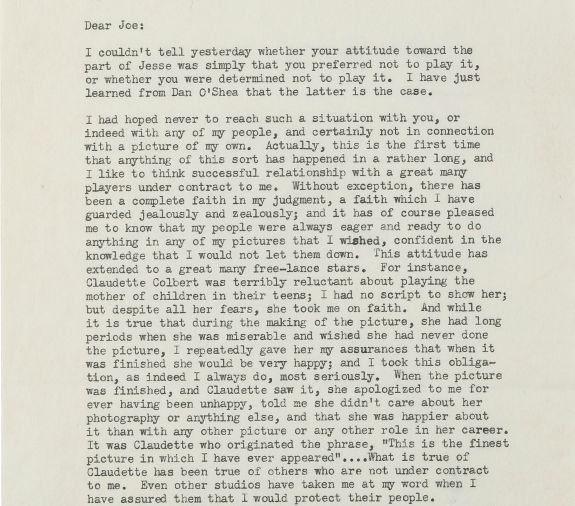 I couldn't tell yesterday whether your attitude toward the part of Jesse was simply that you preferred not to play it, or whether you were determined not to play it. I have just learned from Dan O'Shea [one of Selznick's associates] that the latter is the case.

I had hoped never to reach such a situation with you, or indeed with any of my people, and certainly not in connection with a picture of my own. Actually, this is the first time that anything of this sort has happened in a rather long, and I like to think successful relationship with a great many players under contract to me. Without exception, there has been a complete faith in my judgment, a faith which I have guarded jealously and zealously; and it has of course pleased me to know that my people were always eager and ready to do anything in any of my pictures that I wished, confident in the knowledge that I would not let them down. This attitude has extended to a great many free-lance stars. For instance, Claudette Colbert was terribly reluctant about playing the mother of children in their teens; I had no script to show her; but despite all her fears, she took me on faith. And while it is true that during the making of the picture, she had long periods when she was miserable and wished she had never done the picture, I repeatedly gave her my assurances that when it was finished she would be very happy; and I took this obligation, as indeed I always do, most seriously. When the picture was finished, and Claudette saw it, she apologized to me for ever having been unhappy, told me she didn't care about her photography or anything else, and that she was happier about it than with any other picture or any other role in her career. It was Claudette who originated the phrase, "This is the finest picture in which I have ever appeared".... What is true of Claudette has been true of others who are not under contract to me. Even other studios have taken me at my word when I have assured them that I would protect their people.

Selznick then goes on for several more pages telling why Cotten should accept the part, saying among other things: "I must also say in all candor, Joe, that I cannot concede that you or any other actor is a better judge of what he should or should not do than I am... I am dealing also with the fact that it has been proven over decades of picture-making that no player has a perspective on himself or his own career... Clark Gable told me only the other night how miserable and unhappy he was over having to play Rhett...".

Finally, he concludes his letter with the following paragraphs. 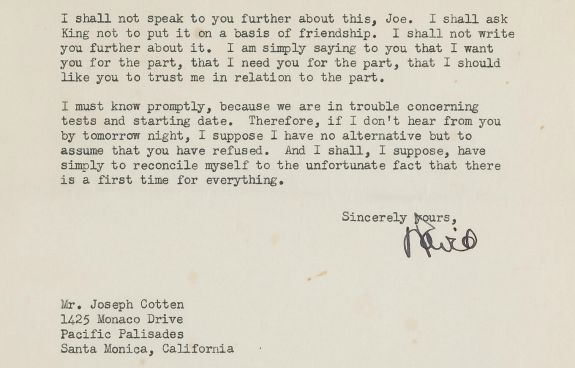 I must know promptly, because we are in trouble concerning tests and starting date. Therefore, if I don't hear from you by tomorrow night, I suppose I have no alternative but to assume that you have refused. And I shall, I suppose, have simply to reconcile myself to the unfortunate fact that there is a first time for everything.