I'm not insane about Brando for this 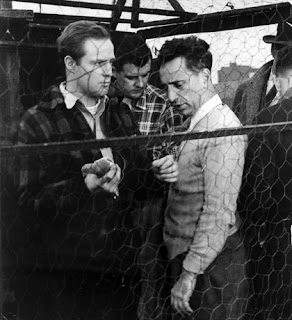 When offered the lead role of dockworker Terry Malloy in Elia Kazan's On the Waterfront (1954), Marlon Brando initially rejected it. Brando, who had worked with Kazan before on A Streetcar Named Desire (1951) and Viva Zapata! (1952), didn't want to work with Kazan again due to the director's damaging testimony before the House of Un-American Activities Committee. In April 1952, Kazan had been a "friendly" witness for HUAC, naming names of eight colleagues who were former Communists and thereby ruining their careers. Kazan was heavily criticised for his actions and it is generally believed that On the Waterfront was his way of justifying them (read more here).

Following Brando's rejection, Frank Sinatra (who had just made From Here to Eternity) was approached to play Terry Malloy in September 1953. Sinatra was eager to play the role and made a verbal agreement with producer Sam Spiegel. Elia Kazan, however, had doubts about Sinatra due to his limited availability. Then Brando decided to play the part after all and Kazan went with his first choice, also because casting Brando meant having a bigger budget and more shooting time. Sinatra was extremely upset about not getting the part, and Spiegel then offered him the role of Father Barry which in fact had already been promised to Karl Malden. When Kazan refused to let Malden go in favour of Sinatra, Sinatra sued Spiegel for $500,000 damages. (The matter was later settled out of court.) 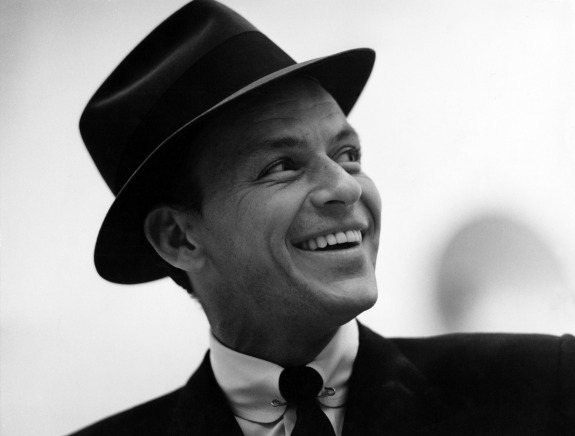 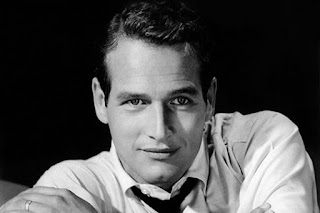 The three letters for this post (or rather, excerpts from letters) were written by Elia Kazan in connection with the casting of Terry Malloy. The first letter is addressed to Budd Schulberg (the film's screenwriter who also named names before HUAC), showing that Kazan wasn't too enthusiastic about Brando at first; Kazan also talks about another alternative to Brando, an actor named Paul Newman who had just made his Broadway debut in Picnic. (Newman did a screentest with Joanne Woodward in the role of Edie, the role that later went to Eva Marie Saint.) In the second letter, written to Marlon Brando, Kazan tried to persuade Brando to take the role, even though he still considered Brando "not right for this part"; noteworthy is that Kazan admits that the script shows parallels with his HUAC experience. And the final letter is addressed to Abe Lastfogel, Frank Sinatra's agent, in which Kazan explains his choosing Brando over Sinatra. 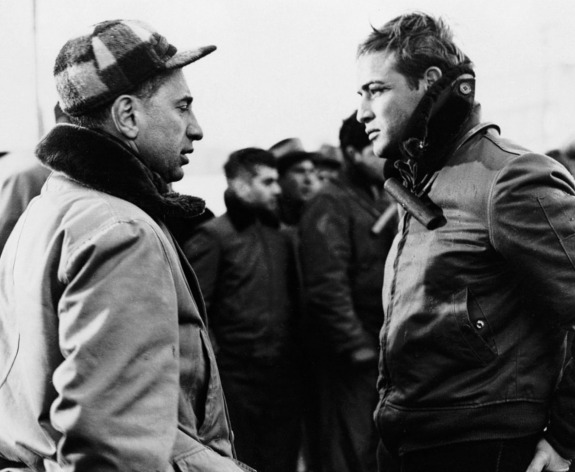 
I'm not insane about Brando for this. In fact in my opinion he is quite wrong. But he's a fine actor and if he's really excited about it and will work like a beginner trying to get a start, he can be fine. [....] At any rate he arrives in town Sunday the second of August and leaves on the fifth, and it is imperative repeat imperative that he read the script and give us his yes or no. He cannot take the script to Europe with him. Our time is running short and we cannot wait for his majesty to get comfy in Paris and send us an answer when he feels it... If we don't get Brando, and I think it most likely we won't, I'm for Paul Newman. This boy will definitely be a film star. I have absolutely no doubt. He's just as good looking as Brando and his masculinity which is strong is also more actual. He's not as good an actor as Brando yet, and probably will never be. But he's a darn good actor with plenty of power, plenty of insides, plenty of sex. He and Malden are working on two scenes to show to Sam and yourself. I'm for him without seeing more.

I cant pretend that its easy or simple to write you. Ultimately, in our little world, everyone hears everything. I will always feel most warmly and devotedly for you, but this does not blot out the things unsaid between us. I will for the time leave them unsaid. I will write you here professionally, and you can behave as you wish from whatever criteria you wish to act from. That's your business and even your problem. I'm sending you the script of a movie in a state of preparation. I'm very very hopeful of the script. I've worked very hard on it, and I'm going to do a lot more work on it. But you're a sensitive person and you will realize its not finished, you will sense its intention and the hope involved in it. Its yet not realized, though its a great deal closer than what you read before. Its meant very seriously. It is taken from living people, though distilled and compacted. The problem which it mirrors still exists and the moral problem it treats - the social responsibility of a citizen as it comes into conflict with his personal allegiances- is one of the oldest and most universal of all problems a man can face. My own point of view towards this problem and Budd's too, is clearly set forth. But the script is more of an involvment in the problem than an exhortation of any kind.  Make no mistake about it, there is a parallel inference to be drawn to the Inquiries into Communist Activities. This parallelism is not the main value of the script. This is the story of a human in torment, and in danger. The first thing I would do if you did become interested would be to take you over [to] HOBOKEN and introduce you to Tony Mike DeVincenzo who went thru exactly what our TERRY goes thru. This is a confrontation which would put flesh and blood on the issue on which our script is built. I've spent three evenings with him and its like being in the presence of a denizen of Dante's Purgatorio. And finally with him and with the whole waterfront of New York Harbor, the issue is not decided, and will probably be in the process of being decided as we shoot the picture.

I dont want to say more about the picture's theme. Just one word about the part. By the common measure which producers and directors use for casting, you are not right for this part. But you weren't right for the Williams Play either and you weren't right for Zapata. This boy is a former fighter, half pure, half hoodlum. He is a boy who has lost his sense of inner dignity or self-worth. At the beginning of our story he doesn't know when he lost it or how. He only discovers that he is behaving like a hoodlum and he has been a contributor to a murder. Slowly thru the unfolding of the incidents of the story and thru his relationship with a girl he discovers the shameful estate to which he has sunken. The body of the story has to do with his effort to find his own dignity and self esteem once more. He's a boy who suffers at the slightest introspection or self examination. He goes thru hell. Finally he acts to make himself respect himself, first putting his life in danger and secondly even going out to meet a violent end, so that he will re-establish himself in the sight of his own inner eye. With this "inside", there is a jaunty exterior which is the pathetic remnant of a career where he was once the white haired boy of the neighborhood, and etc.  There's much more to say, but you can go on from here, if you care to. I think its a giant of a part and a tremendous challenge.

[this letter was a draft letter and possibly never sent] 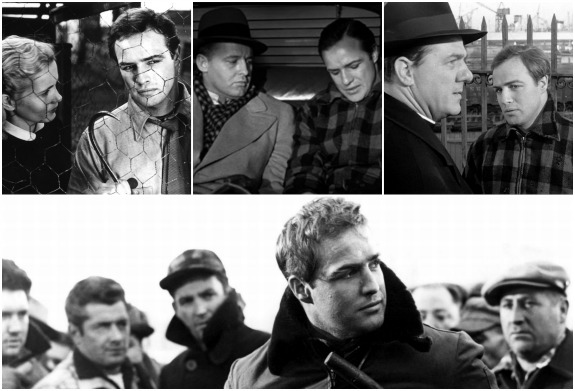 
Obviously from my point of view the decision to go ahead with Frank was a severe compromise. Not on artistic grounds. I was quite happy that way. Frank would have been fine in the part. Brando was my first choice, but since I could not have him and had completely abandoned hope of having him, Frank was a happy choice for me.... The alternate to Frank was an unknown boy in the cast of PICNIC. His release was a dubious matter. [.....] Then, after Frank was all set, Brando walked in one day, to my complete surprise, and said he wanted to go ahead. I wanted him. Not just Sam. I wanted him. Not that I was unhappy with Frank. But with Brando there would be no time pressure. My guess is that this picture will take 42 days, even possibly a few more. We now have a decent budget.... I dont like to get hurt and I hate to hurt any one. Nor do I feel that the thing was handled well by Sam. Sam says that's the only way he could have done it. I'm not all sure it was. I'm, on the other hand, not sure it wasn't. One thing sure: the change was necessary. We had done something desperate in accepting Frank with 27 days, desperate and foolish. Its terrible and regrettable that Frank had to be hurt. But couldn't the hurt be partially assuaged by having Frank announce that he withdrew because the schedule did not permit. And couldn't another part of his hurt be softened by my writing him and assuring him that the basis of the change WITH ME was time. I had gotten myself in a foolish and desperate (But by me, necessary) spot, and I had to get out of it when I saw a way out. I'm not callous to Frank's feelings. But say this much for us: when we went into it with Frank we went in on complete good faith. In fact our demands were craven. We begged him to give us a few more days. He was unable to, so I got us three more on the phone with Lew. We did not ask him to give up the Fox musical or anything like that. We were beggars. And we begged. But too much work and pain and time from Budd and myself are riding on this thing-- to do anything else than what we allowed Sam to do. I wish Sam had done it differently but Abe I want you to know I'm glad right now that we have Marlon. And make no mistake about that.