In the fall of 1961, Peter Lorre sent Groucho Marx a copy of Stuart Gilbert's James Joyce's Ulysses (1930), a study of Joyce's (often considered unreadable) novel. After receiving the book, Groucho wrote Lorre the following letter, saying that now he needed another book to explain Gilbert's study. In typical Groucho fashion, he then "confused" Stuart Gilbert with Gilbert Stuart, the artist who had painted the portrait of George Washington in 1796.

It was very thoughtful of you to send me a book explaining James Joyce’s “Ulysses”. All I need now is another book explaining this study by Stuart Gilbert who, if memory serves, painted the celebrated picture of George Washington which hangs in the Metropolitan Museum. I realize that there is some two hundred years’ difference in their ages, but any man who can explain Joyce must be very old and very wise.

You disappeared rather mysteriously the other night, but I attribute this to your life of crime in the movies.

Best to you both.


Source: The Groucho Letters: Letters from and to Groucho Marx (1967) 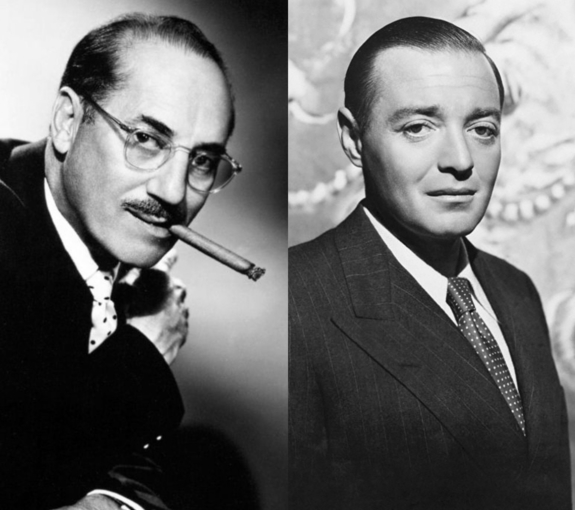 For a long time I only associated director Robert Wise with his two biggest hits, the musicals West Side Story (1961) and The Sound of Music (1965) — films I grew up with and still love to this day. It wasn't until much later that I realised that musicals make up only a small part of Wise's oeuvre. Throughout his career, Wise had tackled a wide range of genres, including film noir (The Set-Up, 1949), horror (The Haunting, 1963), drama (I Want to Live!, 1958), war (The Sand Pebbles, 1966) and sci-fi (The Day the Earth Stood Still, 1951). Wise was one of Hollywood's most versatile directors, yet he was often criticised for not leaving a personal stamp on his films (as opposed to directors like Alfred Hitchcock or John Ford who had very recognisable styles). In response to the criticism, he once said: "My answer to that is that I’ve tried to approach each genre in a cinematic style that I think is right for that genre. I wouldn’t have approached The Sound of Music the way I approached I Want to Live! for anything, and that accounts for a mix of styles."

While Wise may not have had a signature style, there is no denying that he was a great filmmaker. Having started his career as editor at RKO —where he edited, among others, Orson Welles' Citizen Kane (1941) and The Magnificent Ambersons (1942), the latter editing job not to everyone's liking — he turned to directing in 1944 with The Curse of the Cat People. Wise directed a total of forty films and a number of them he also produced. His directorial work is discussed in detail in J.R. Jordan's Robert Wise: The Motion Pictures —originally published in 2017 and earlier this year released in a revised edition. 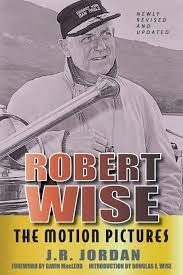 As the title suggests, Jordan's book is not a biography but focuses on Wise's movies. Still, we learn a bit about Wise's early life from Douglas E. Wise (the director's nephew) in his heartfelt introduction and also from Jordan in his introduction to the first chapter. Jordan talks about Wise's start in Hollywood, his becoming an editor and how during the editing of The Magnificent Ambersons Wise directed one additional scene, marking his first steps as a director.

The forty films Wise would eventually direct are all given their own chapter in the book. In clear, unpretentious prose, Jordan discusses each film, while providing a plot synopsis, plenty of background information and an in-depth analysis of one or more aspects of the film. (Interesting, for example, is his analysis of the use of colours and its symbolism in West Side Story.) Although the films are arranged chronologically, the chapters can be read in random order. Admittedly, certain chapters I haven't read yet. There is still a number of Wise films I want to see and I will wait to read those entries until after I've seen the films. (Because, obviously, Jordan's analyses do contain spoilers.)

More than twenty chapters include interviews with cast and crew members who shared their memories of working with Wise. These personal accounts are a real treat, allowing us a peek behind the scenes and to learn a bit more about the man himself. Regarding his working methods, what I found especially interesting is that, according to several of the interviewed actors, Wise didn't really direct them during the actual filming. Lindsay Wagner, the female lead in Two People (1973), said that Wise did most of his directing during the casting of the film. At some point she asked him if he shouldn't direct her, to which he replied: "No, you showed me who this character was the day we did the screen test".

From all these personal stories, it is clear that Wise must have been a wonderful man to work with. He is described as kind and gentle, easy-going, sensitive, patient and soft-spoken. Or as worded by Wise's nephew Douglas: "There was no temper. There was no ego. There was no flexing of power or anything else. He was simply a nice guy and everybody, cast and crew alike, admired him."

Joe Jordan's Robert Wise: The Motion Pictures is a must-have for any Wise fan and a great addition to any (classic) film buff's library. It's a book you will particularly enjoy once you've seen the films. For me, it was an incentive to delve more into Wise's filmography. There was a number of films I had been meaning to see for a long time and I'm glad I finally got around to it (Born to Kill, Three Secrets, The Day the Earth Stood Still, The House on Telegraph Hill, Until They Sail and Odds Against Tomorrow— all recommended). And of course I will be picking up the book again as I'm working my way through the rest of Wise's filmography.

To conclude this post, I will let Robert Wise himself do the talking. In a letter to a certain Irwin Schuett dated 16 December 1981 (not to be found in Jordan's book), Wise looks back on the filming of The Sound of Music. 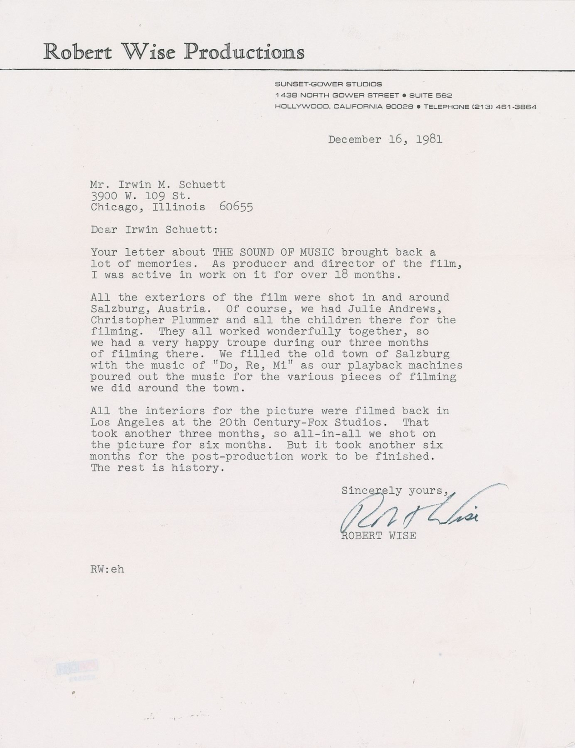 Your letter about THE SOUND OF MUSIC brought back a lot of memories. As producer and director of the film, I was active in work on it for over 18 months.

All the exteriors of the film were shot in and around Salzburg, Austria. Of course, we had Julie Andrews, Christopher Plummer and all the children there for the filming. They all worked wonderfully together, so we had a very happy troupe during our three months of filming there. We filled the old town of Salzburg with the music of "Do, Re, Mi" as our playback machines poured out the music for the various pieces of filming we did around the town.