I have always been a thoroughly hypnotized admirer of your pictures

After living in Barcelona for five years, recently we (my sister and I) moved to Valencia, Spain's third largest city, which is located about 300 km south of Barcelona. During the years we've lived in Barcelona, we were lucky enough to see about 200 classic (predominantly Hollywood) films on the big screen at the wonderful film theatre Filmoteca. Fortunately Valencia also has a Filmoteca, where currently a small retrospective is dedicated to Orson Welles. As part of the Welles programme we've watched The Lady from Shanghai (1947) and Touch of Evil (1958), the latter film for the first time, and still to come are new-to-me films The Third Man (1949) and The Trial (1962). (Unfortunately I've missed Citizen Kane (1941), which I would have liked to rewatch on the big screen.) 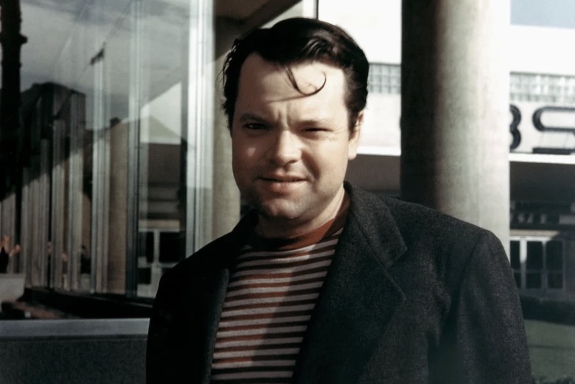 While I enjoyed the Welles films I've seen (I especially love the visual aspects), I am not a Welles fan. Someone who was —and a big one at that— was Peter Bogdanovich, director of such classics as The Last Picture Show (1971), What's Up, Doc? (1972) and Paper Moon (1973).
The letter for this post was written by Bogdanovich to Welles in January 1962, several years before the two men would actually meet. Bogdanovich, then 22 years old, wrote Welles in connection with a monograph he had written about Welles' work. The previous year, the aspiring film director had been commissioned by the Museum of Modern Art in New York to organise a retrospective on Welles —the first one ever in the USA— and to also write the accompanying monograph. As Welles himself could not attend the event since he was living and working in Europe, a copy of the 16-page monograph (entitled The Cinema of Orson Welles) was sent to him and he reportedly liked it. Nevertheless, Bogdanovich never got an answer to his letter and didn't hear from Welles until 1968, when Welles suddenly phoned him and asked if they could finally meet. The two men immediately hit it off —they eventually became friends— and not before long started having in-depth conversations about Welles' work, which they decided to tape and assemble in a book. The book, This is Orson Welles, was not published until 1992, seven years after Welles' death.