A toast, a toast to dearest Joan... 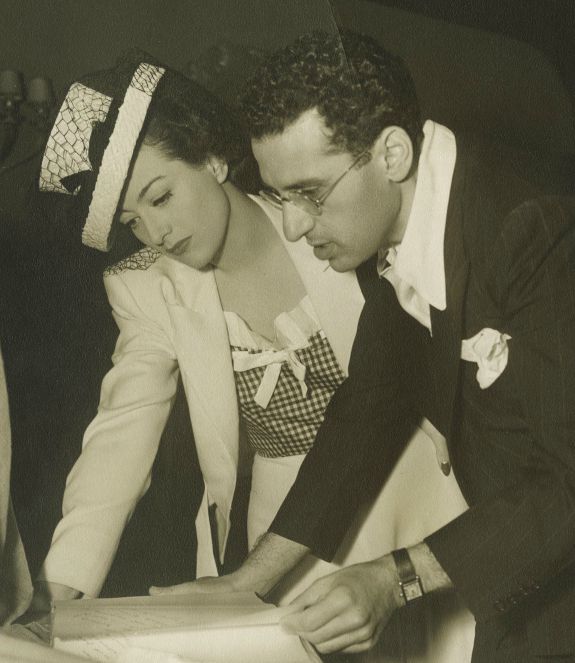 Joan Crawford not only had many friends, but her friendships were also deep and long-lasting. One of her friends Carl Johnes (writer of the book "Crawford: The Last Years: An Intimate Memoir" (1979)) once said: "She never took any friendship for granted. In fact, I think one of her many talents was the one for friendship— perhaps it was her greatest. Once she made the decision to enter into a real friendship with another person, she became devoted to that person forever. She worked at it, and understood the importance of it" [source].

One of Joan's Hollywood friends was director George Cukor. The two first started working together in 1935 when Cukor directed Joan in No More Ladies; three more pictures followed, i.e. The Women (1939), Susan and God (1940) and A Woman's Face (1941). With The Women Cukor helped reboost Joan's career (after she had been labelled box-office poison), and it was around this time that they also entered into a lifelong friendship. Shortly after Joan's death, Cukor remembered his friend in an article for the New York Times: "In private life, Joan was a lovable, sentimental creature. A loyal and generous friend, very thoughtful— dear Joan, she forgot nothing: names, dates, obligations. These included the people at Hollywood institutions who had helped to make and keep her a star..." [click here to read Cukor's tribute in full; the same text was read by Cukor at Joan's memorial service in June 1977]. 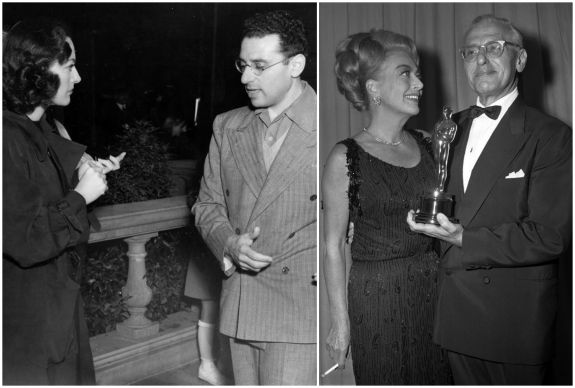 As with many of her friends, Joan Crawford also kept up a correspondence with George Cukor. Shown below are two of the letters they wrote to each other. In October 1973, Joan wrote to Cukor while she was busy moving house. At the time she was still on the Board of Directors of Pepsi Cola, hence her reference to her "Pepsi work" (her fourth and final husband Alfred Steele was CEO of Pepsi Cola and when he died in 1959, Joan was elected to fill the vacant seat on the board). The letter from Cukor to Joan was written in January 1974, in which he most eloquently thanked her for the food she had sent him for Christmas. As you can read in one of my earlier posts, Joan Crawford loved to cook and was apparently also good at it (there is even a book with her recipes). 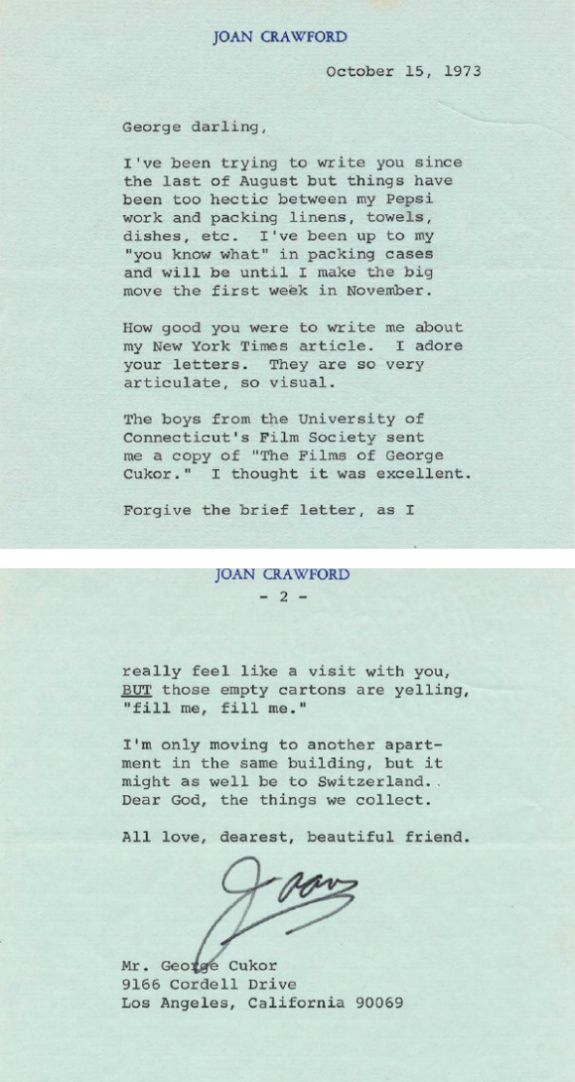 Image: The Best of Everything: A Joan Crawford Encyclopedia

I've been trying to write you since the last of August but things have been too hectic between my Pepsi work and packing linens, towels, dishes, etc. I've been up to my "you know what" in packing cases and will be until I make the big move the first week in November.

How good you were to write me about my New York Times article. I adore your letters. They are so very articulate, so visual.

The boys from the University of Connecticut's Film Society sent me a copy of "The Films of George Cukor." I thought it was excellent.

Forgive the brief letter, as I really feel like a visit with you, BUT those empty cartons are yelling "fill me, fill me."

I'm only moving to another apartment in the same building, but it might as well be to Switzerland. Dear God, the things we collect. 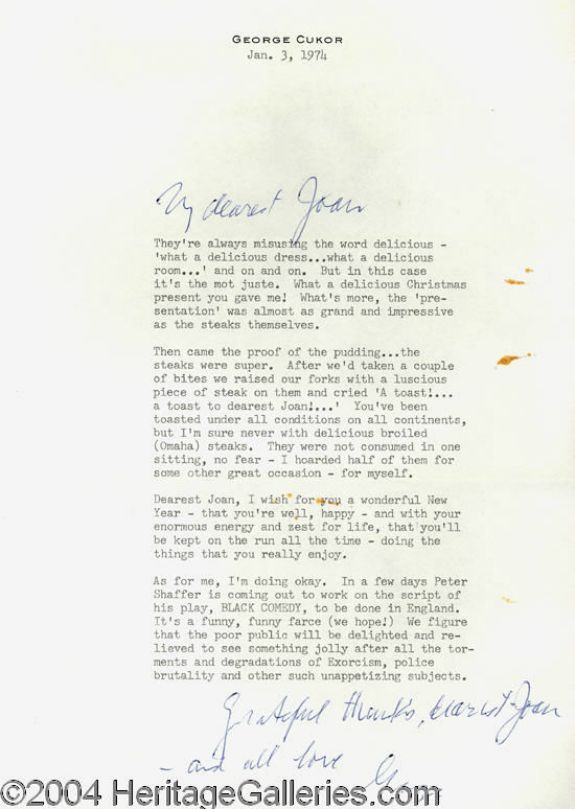 They're always misusing the word delicious- 'what a delicious dress... what a delicious room...' and on and on. But in this case it's the mot juste. What a delicious Christmas present you gave me! What's more, the 'presentation' was almost as grand and impressive as the steaks themselves.

Then came the proof of the pudding... the steaks were super. After we'd taken a couple of bites we raised our forks with a luscious piece of steak on them and cried 'A toast .... a toast to dearest Joan'.... You've been toasted under all conditions on all continents, but I'm sure never with delicious broiled (Omaha) steaks. They were not consumed in one sitting, no fear - I hoarded half of them for some other great occasion- for myself.

Dearest Joan, I wish for you a wonderful New Year- that you're well, happy - and with your enormous energy and zest for life, that you'll be kept on the run all the time- doing the things that you really enjoy.

As for me, I'm doing okay. In a few days Peter Schaffer is coming out to work on the script of his play, BLACK COMEDY, to be done in England. It's a funny, funny farce (we hope!) We figure that the poor public will be delighted and relieved to see something jolly after all the torments and degradations of Exorcism, police brutality and other such unappetizing subjects.

Grateful thanks, dearest Joan
and all love, George