"I hope to remain one of your 'sacred cows'."

Grace Kelly became Princess of Monaco when she married Prince Rainier in 1956. Six years later, Alfred Hitchcock offered the retired actress the leading role in his new film "Marnie" (1964). Grace was eager to work with Hitch again, but the people of Monaco were not too thrilled with the idea of the princess playing a kleptomaniac. Due to the protests in her new country, Grace withdrew from the project, leaving Hitchcock to look for a new leading actress (whom he would find in Tippi Hedren). 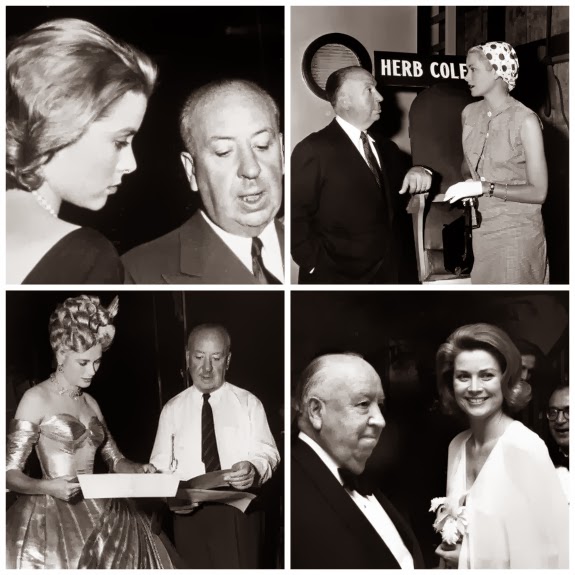 Here is a letter written by Grace Kelly to Alfred Hitchcock, in which she expresses her regret over her withdrawal from the project. And the second letter is a draft copy of the letter Hitch sent to Grace. 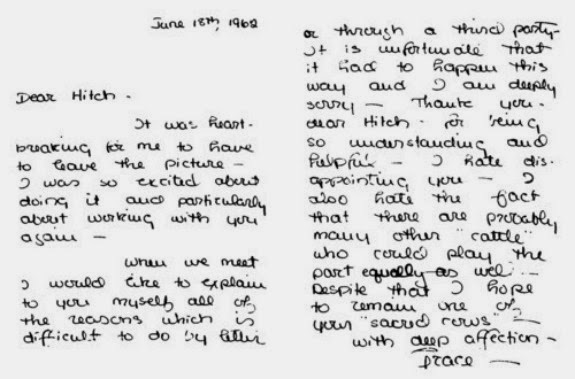 It was heartbreaking for me to have to leave the picture- I was so excited about doing it and particularly about working with you again-
When we meet I would like to explain to you myself all of the reasons which is difficult to do by letter or through a third party. It is unfortunate that it had to happen this way and I am deeply sorry- Thank you, dear Hitch, for being so understanding and helpful- I hate disappointing you- I also hate the fact that there are probably many other "cattle" who could play the part equally as well- Despite that I hope to remain one of your "sacred cows"-
with deep affection- Grace 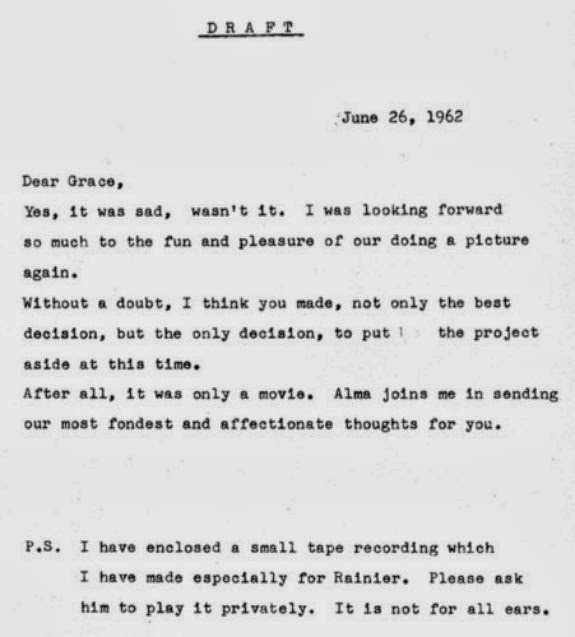 Yes, it was sad, wasn't it. I was looking forward so much to the fun and pleasure of our doing a picture again.
Without a doubt, I think you made, not only the best decision, but the only decision, to put the project aside at this time.
After all, it was only a movie. Alma joins me in sending our most fondest and affectionate thoughts for you.

P.S. I have enclosed a small tape recording which I have made especially for Rainier. Please ask him to play it privately. It is not for all ears.

Note: Alma whom Hitch mentions in his letter, was his wife Alma Reville. They got married in 1926 and remained married until Hitch's death in 1980.
Posted by Clarissa Saunders 2 comments:
Tags: Alfred Hitchcock, Grace Kelly, Marnie 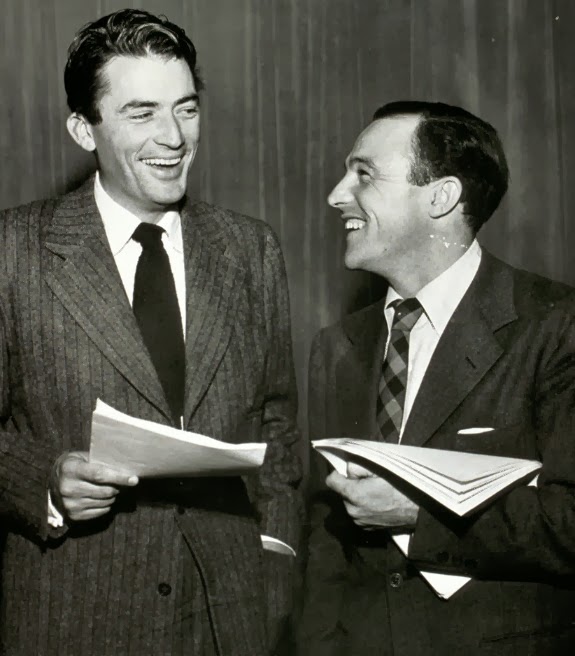 Well, here's an unusual combination: Gregory Peck and Gene Kelly. To my knowledge, the two men never appeared in a film together, but searching the net I've learnt that they did appear together on the radio. During Hollywood's Golden Age, actors not only played in movies but they also did radio shows. One of those shows was "Cresta Blanca Hollywood Players". The show ran from September 1946 until February 1947 and was sponsored by Cresta Blanca Wines. The episodes (26 in total) were 30-minute adaptations of popular movies, performed by some of the greatest stars in Hollywood. The eight performers for the series were: Claudette Colbert, Joseph Cotten, Bette Davis, Joan Fontaine, John Garfield, Paulette Goddard, Gene Kelly and Gregory Peck (guest performers included 19-year old Janet Leigh). The photo of Gregory Peck and Gene Kelly (above) was most likely taken during the series.

In 1962, the film "To Kill a Mockingbird" (directed by Robert Mulligan) was released and the role of Atticus Finch was played to perfection by Gregory Peck. Peck got the Oscar for Best Actor during the 35th Academy Awards Ceremony, held on 8 April 1963. Eleven days later, Gene Kelly wrote the following letter to congratulate Gregory on winning the Oscar. And I can only imagine he's referring to the "Hollywood Players" when he's talking about the "group". 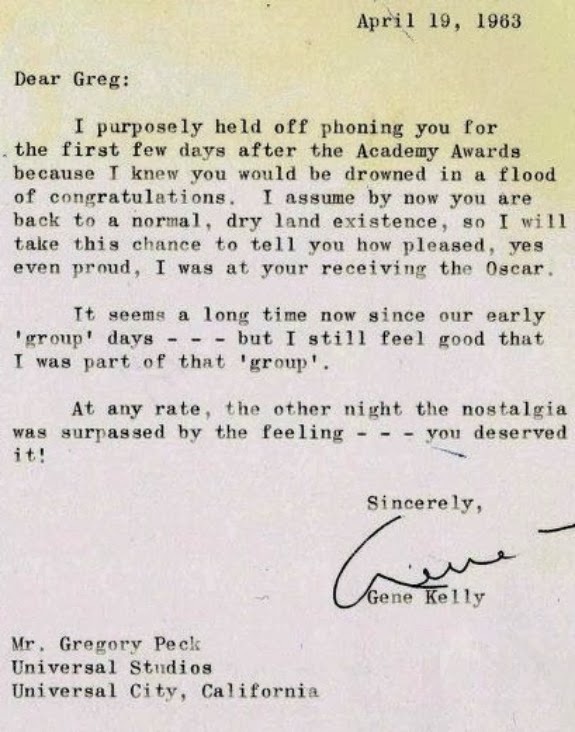 Via: did you see that one?

Season's greetings from Joan to Barbara

To get into the spirit of the holiday season, the letter for this post is a season's greeting from one Hollywood diva to another. It's a letter from Joan Crawford to Barbara Stanwyck. The two actresses were very good friends. Their friendship began in the 1930s and lasted until Crawford's death in 1977. This is not the only correspondence that is to be found between the two women, there are a few more letters that I will post later on. Incidentally, Joan Crawford loved to write letters. Throughout her life she wrote a zillion fan letters, and there was also a sizeable correspondence she maintained with her friends and family. To see more of her voluminous correspondence, visit the wonderful website The Best of Everything: A Joan Crawford Encyclopedia. 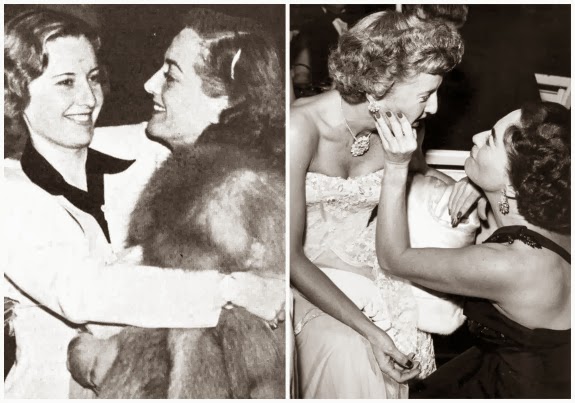 Here is Joan's letter to Barbara, dated 22 December 1962, which is exactly 51 years ago. The handwritten part at the bottom is Barbara's. 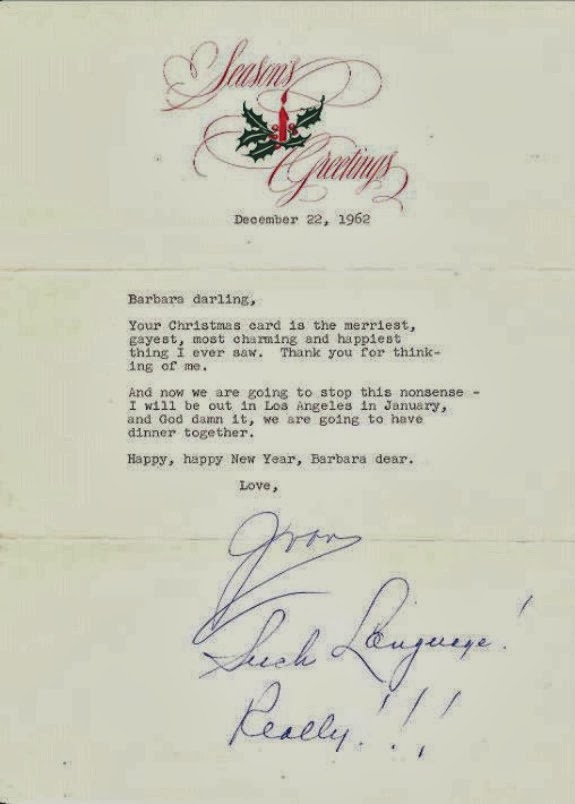 Source: the best of everything: a joan crawford encyclopedia

Your Christmas card is the merriest, gayest, most charming and happiest thing I ever saw. Thank you for thinking of me.

Miss Monroe, thanks for the roses! 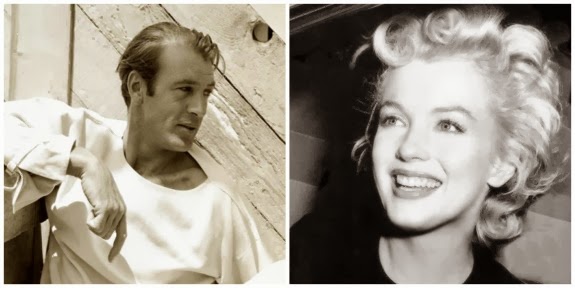 Browsing the internet for letters, it's great to find correspondence that is unexpected or surprising. I think the following letter, dated 22 June 1960, falls into that category. It was written by Gary Cooper addressed to Marilyn Monroe. I had no idea these two actors knew each other. Admittedly, judging by the letter they didn't know each other well, but well enough for Marilyn to send Gary Cooper roses when he was in the hospital. In April 1960, Cooper was hospitalised to undergo surgery for prostate cancer. Sadly, the cancer had already spread to his colon and would spread only further. A year later, on 13 May 1961, Cooper would die at the age of sixty. 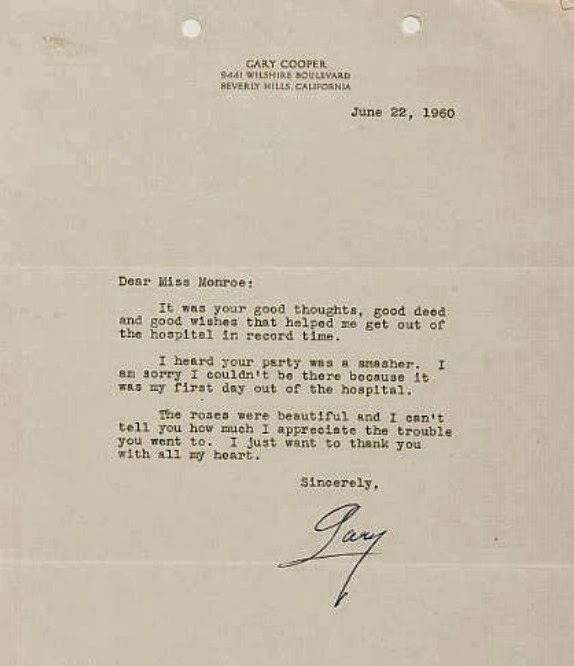 Via: this is marilyn

It was your good thoughts, good deed and good wishes that helped me get out of the hospital in record time.

I heard your party was a smasher. I am sorry I couldn't be there because it was my first day out of the hospital.

The roses were beautiful and I can't tell you how much I appreciate the trouble you went to. I just want to thank you with all my heart.

Until 1929, fan photos of Hollywood stars were sent out by the film studios for free. These photos were hugely popular amongst fans and produced in large quantities. It is said that one of the studios was sending out 1.5 million photos a year, and that the total of photos sent by the studios and freelance actors amounted to 50 million a year. Well, someone must have thought money was to be made from this. Beginning in 1929, fans would be charged for the photos (10cts for a 5x7" photo, 25cts for 8x10" and $1 for 1x14"). They'd receive a standard reply card from the studio (signed by the actor whose photo had been requested), saying there was a rule against sending free photos and asking the fans to pay for them in advance. There were Hollywood stars, however, who refused to charge their fans for the photos. Charlie Chaplin, for example, argued that he owed his success to his fans, mostly children, and to ask them for money would be unfair. Chaplin would continue to send out photos free of charge, which must have cost him a fair amount of money (considering he received 20,000 fan letters per month).

Here are two reply cards from Warner Brothers, one signed by Errol Flynn, the other one by Olivia de Havilland. 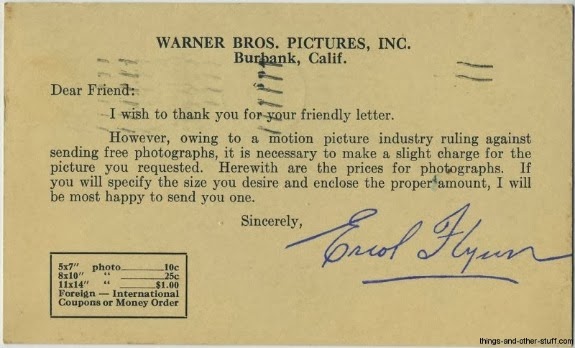 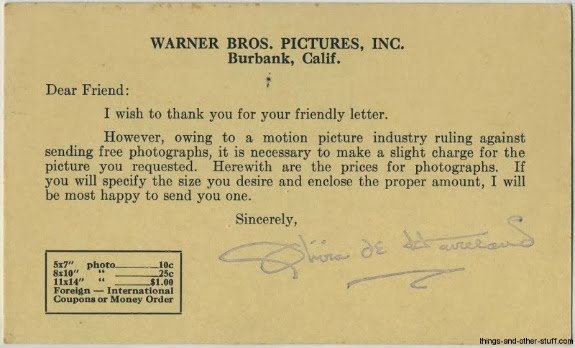 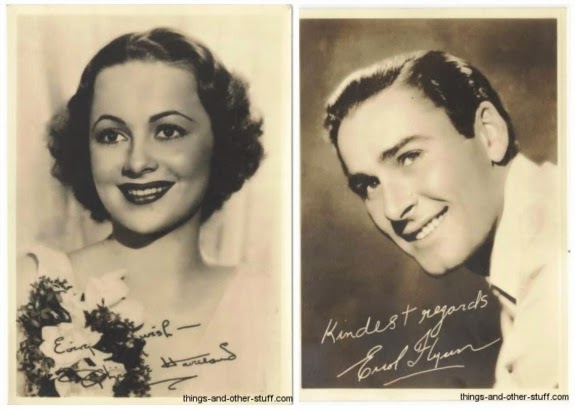 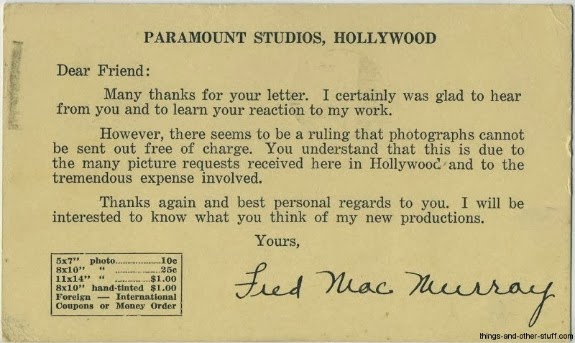 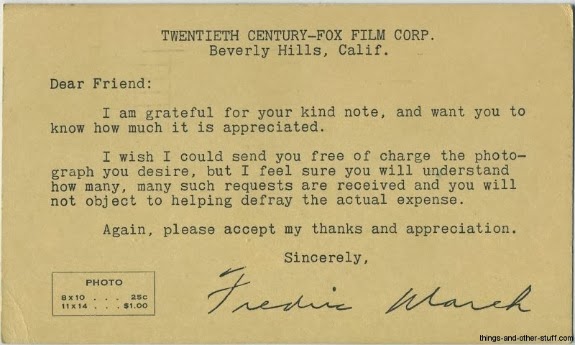 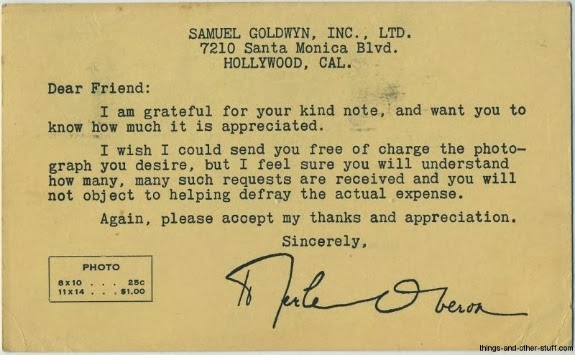 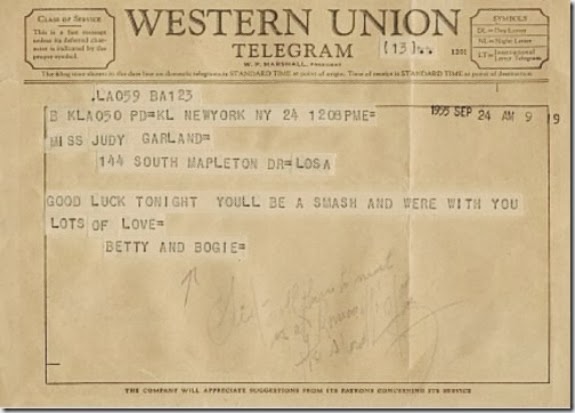 
I came across this telegram from Lauren Bacall and Humphrey Bogart addressed to Judy Garland. The telegram is dated 24 September 1955, and Betty (Bacall's real name was Betty Joan Perske) and Bogie are wishing Judy Garland good luck ("Good luck tonight. You'll be a smash and we're with you. Lots of love, Betty and Bogie"). Since this sounds like something friends would write to each other, I was curious to know if they were indeed friends.

When I think of the Rat Pack, I always think of Dean Martin, Sammy Davis jr. and Frank Sinatra, who appeared on stage together and in films in the 1960s. However, there was a Rat Pack before that. It was a group of befriended actors who hung out together in New York during the 1950s, with Humphrey Bogart leading the Pack. And yes, Judy Garland was also part of the group (she was even the first vice-president). The original Rat Pack also included, amongst others, Bogart's wife Lauren Bacall (of course), Frank Sinatra (who also belonged to the new Pack), Katharine Hepburn, Spencer Tracy, David Niven and Cary Grant. There were also visiting members, Errol Flynn was one of them. So it seems Betty, Bogie and Judy were indeed friends, and the telegram was probably meant to wish Judy luck on "The Judy Garland Show" (the first episode of the Ford Star Jubilee), which aired on television on 24 September 1955.

"I can't say whether or not we will use Miss Hepburn..."

"Roman Holiday" (1953) was Audrey Hepburn's first Hollywood film and the only one she won an Oscar for. Prior to "Roman Holiday" Audrey had only played small roles in British productions. On 18 September 1951, British director Thorold Dickinson did a screentest with Audrey at Pinewood Studios, during which Audrey not only read her lines but was also interviewed by Dickinson about her life and experiences during WWII. Footage of this special screentest was sent to director William Wyler in Rome, where he was preparing his new film "Roman Holiday". This is Wyler's answer to Dickinson (whom he mistakenly calls Harold) concerning Audrey's screentest. 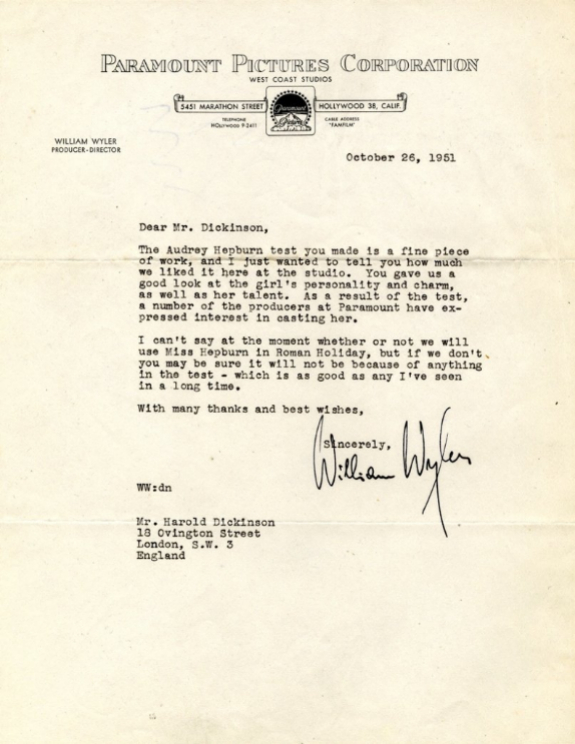 The Audrey Hepburn test you made is a fine piece of work, and I just wanted to tell you how much we liked it here at the studio. You gave us a good look at the girl's personality and charm, as well as her talent. As a result of the test, a number of the producers at Paramount have expressed interest in casting her.

I can't say at the moment whether or not we will use Miss Hepburn in Roman Holiday, but if we don't you may be sure it will not be because of anything in the test- which is as good as any I've seen in a long time.

With many thanks and best wishes, 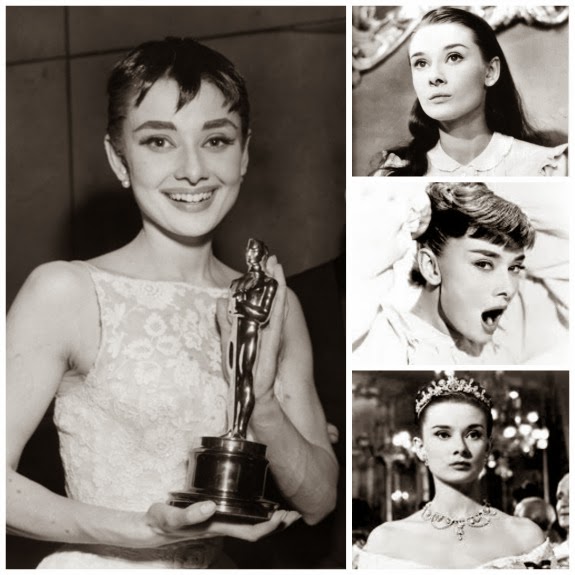 Of course we all know how it ended. Elizabeth Taylor for whom the role of Princess Ann had originally been written had to make way for 24-year old Audrey Hepburn. Wyler later said: "She had everything I was looking for: charm, innocence and talent. She was also very funny. She was absolutely enchanting and we said: 'That's the girl!'"

Errol and his unpaid underwear 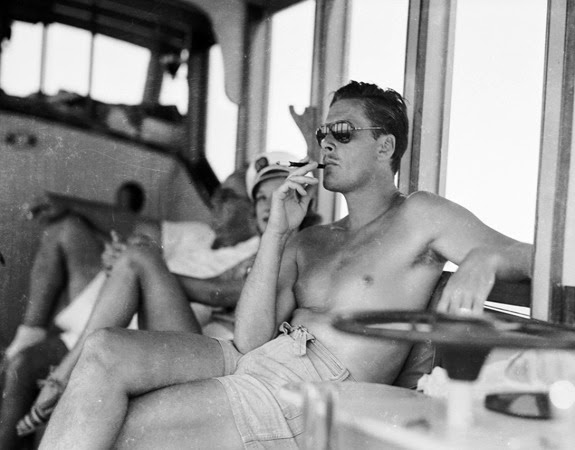 When I was a young girl, Errol Flynn was my first movie hero, so I thought it would be nice to start this blog with him. While dashing and charming on the big screen, in real life Errol was a bit of a scoundrel and known for his notorious lifestyle. He loved partying and spending lots of money, which often got him into financial difficulties. Thus, the following, handwritten letter shouldn't come as a surprise.

The letter (or note, rather) dates from January 1955, but was only discovered June of this year. Apparently Errol bought several items at a Northampton clothes shop that he didn't pay for (underwear, pants?; there is no record of what he actually bought). Bernard Jeffery, who was manager of the shop at the time, hired a firm of detectives (MacCormack's Agency) to track Errol down after he'd left town without paying his bills. Earlier this year, the letter was discovered in the shop's archives by the current manager Jonathan Williams, great grandson to Mr Jeffery. In this letter, addressed to MacCormack's Agency, Errol is asking for a postponement of payment (the handwritten date was added by Mr Jeffery). It remains unclear, however, if he did pay the bill eventually. 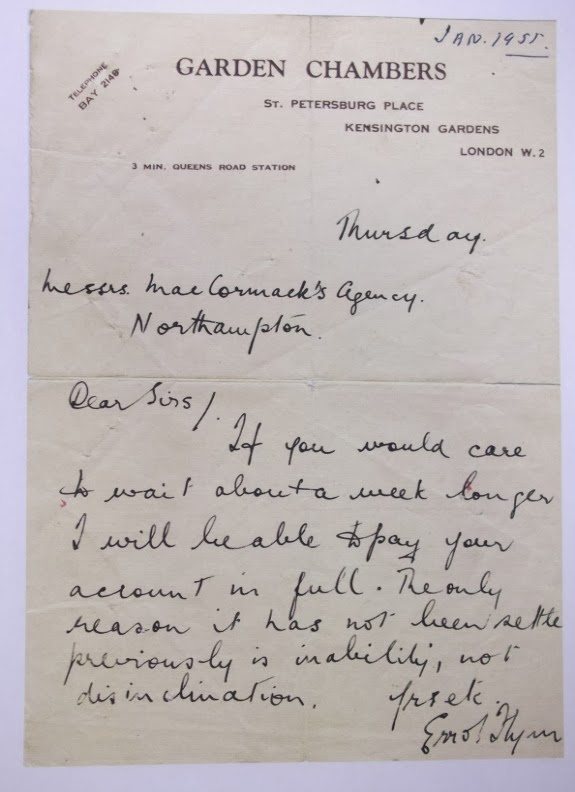 If you would care to wait about a week longer I will be able to pay your account in full. The only reason it has not been settled previously is inability, not disinclination.