Dialogue is the foundation

In the late 1950s, following the decline of her film career, Barbara Stanwyck turned to television. Her television career would prove quite successful earning her three Emmy Awards-- one for The Barbara Stanwyck Show (1961), another for the western series The Big Valley (1965-1969) and a third for the hit mini-series The Thorn Birds (1983). In 1985, Barbara made a few guest appearances in the successful soap opera Dynasty before starring in its spin-off The Colbys for a full season. Dissatisfied with her role as Constance Colby Patterson ("I seemed to be saying the same things week after week"), Barbara quit the show after the first season. The role would be the last of her career. (When offered a leading role in another soap opera Falcon Crest, Barbara declined and the part went to Jane Wyman.)

After quitting The Colbys, Barbara donated 24 of the show's scripts to the University of Wyoming in October 1986. In a letter accompanying the scripts (as seen below), Barbara urged student writers and film historians to read them in order to learn from the bad dialogue. "Dialogue is the foundation", she emphasized while encouraging the re-reading of scripts she had previously donated to the University, among them gems like Ball of Fire (1941; written by Billy Wilder/Charles Brackett), Double Indemnity (1944; Billy Wilder/Raymond Chandler), Remember the Night (1940; Preston Sturges) and The Lady Eve (1941; Preston Sturges). 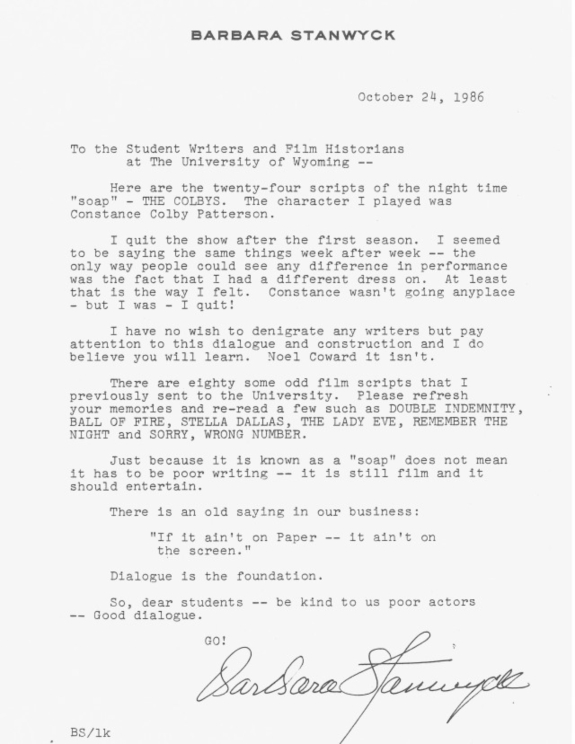 Here are the twenty-four scripts of the night time "soap" - THE COLBYS. The character I played was Constance Colby Patterson.

I quit the show after the first season. I seemed to be saying the same things week after week -- the only way people could see any difference in performance was the fact that I had a different dress on. At least that is the way I felt. Constance wasn't going anyplace - but I was- I quit!

I have no wish to denigrate any writers but pay attention to this dialogue and construction and I do believe you will learn. Noel Coward it isn't.

There are eighty some odd film scripts that I previously sent to the University. Please refresh your memories and re-read a few such as DOUBLE INDEMNITY, BALL OF FIRE, STELLA DALLAS, THE LADY EVE, REMEMBER THE NIGHT and SORRY, WRONG NUMBER.

Just because it is known as a "soap" does not mean it has to be poor writing-- it is still film and it should entertain.

Dialogue is the foundation.

So, dear students-- be kind to us poor actors-- Good dialogue. 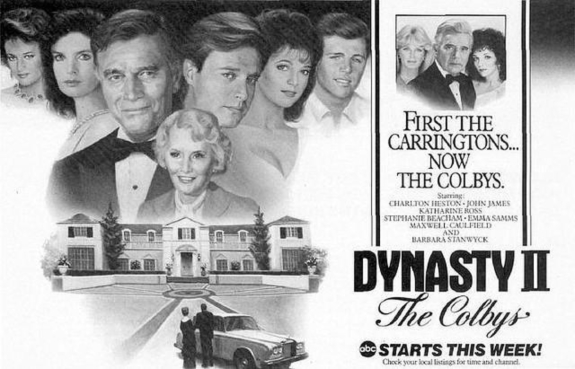 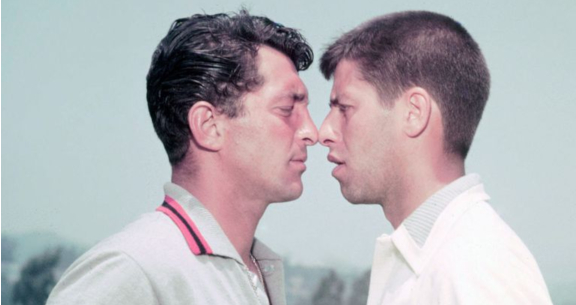 Errol Flynn, you are a hard man to get!

As a child Marilyn Monroe was a fan of Errol Flynn. After she became a star herself, Marilyn attended several of Flynn's notorious parties at Mulholland Farm. According to Hedy Lamarr, Flynn often held "greyhound" races around his house where six young men would chase a "rabbit", i.e. a topless girl dressed like a Playboy bunny. The bunny was sometimes a well-known actress and at one time she was Marilyn [source].


In 1950, Marilyn was not yet a star but a few years away from becoming one. With her supporting roles in two critically acclaimed films All About Eve and especially The Asphalt Jungle Marilyn got noticed by the critics, and at the end of 1950 she signed a contract with 20th Century-Fox where she would enjoy her biggest successes. It was around that same year that Marilyn received flowers from her childhood idol Errol Flynn. Thanking Flynn for his gift, Marilyn wrote him the following sweet note. Marilyn's note was not sent but is believed to have been left at Mulholland Farm's doorstep. 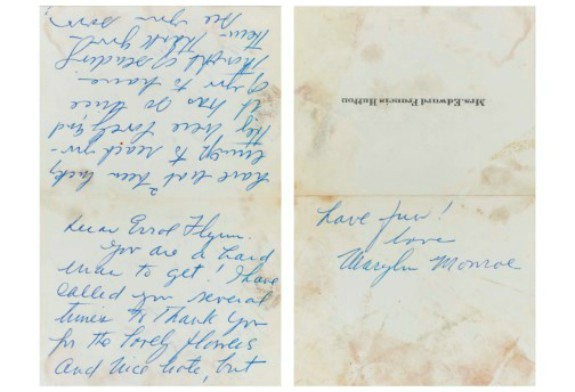 Dear Errol Flynn.
You are a hard man to get! I have called you several times to thank you for the lovely flowers and nice note, but have not been lucky enough to reach you - They were lovely, and it was so nice of you to have thought of sending them - Thank you - See you soon, have fun!

love
Marilyn Monroe
Note: Marilyn's message to Errol Flynn was written on a calling card from "Mrs. Edward Francis Hutton", i.e. Dorothy Dear Metzger, Hutton's third wife. Why Marilyn used the card or how she came by it is not clear. 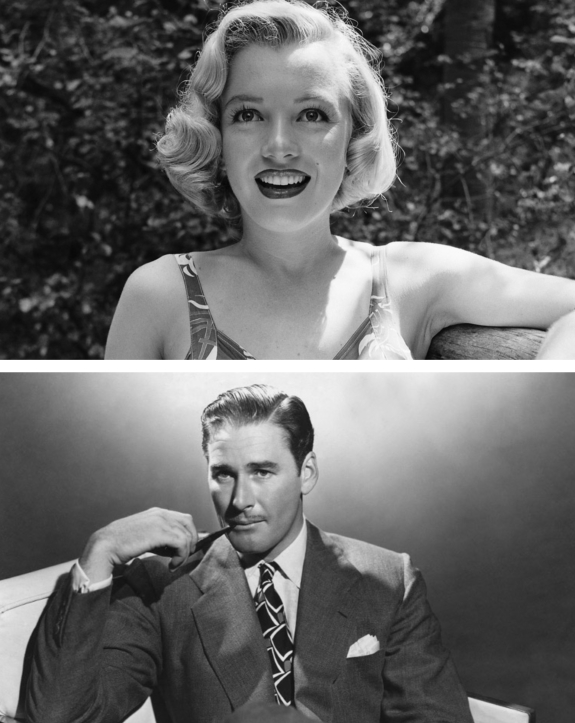