The Conqueror: I am positive this can be a very important, powerful picture

The Conqueror (1956) was John Wayne's final picture for RKO as part of a three-picture deal Wayne had signed with the studio. Directed by Dick Powell, it tells the story of Mongol leader Temujin (later known as Genghis Khan) who falls for Tartar princess Bortai and abducts her, causing a war between the Mongols and the Tartars. The film is generally regarded as one of the worst films of all time and also contains one of the worst miscastings in film history.

John Wayne stars as Genghis Khan, which is as bad and ridiculous as it sounds. Apart from looking utterly silly with his black wig and Fu Manchu moustache, Wayne plays the Asian warlord with his characteristic drawl as if Khan were an American cowboy. The stilted dialogue written by Oscar Millard doesn't help Wayne's performance (or anyone else's in the cast) either. Wayne delivers lines like "I feel this Tartar woman is for me. My blood says take her" and "I shall keep you, Bortai. I shall keep you unresponding to my passion. Your hatred will kindle into love... ", while Susan Hayward, who is also wasted in her role as the Tartar princess, says things like: "Before that day dawns, Mongol, the vultures will feast on your heart!" It's all very laughable and makes you wonder why Wayne and Hayward, both at the height of their careers, had agreed to do the film at all. 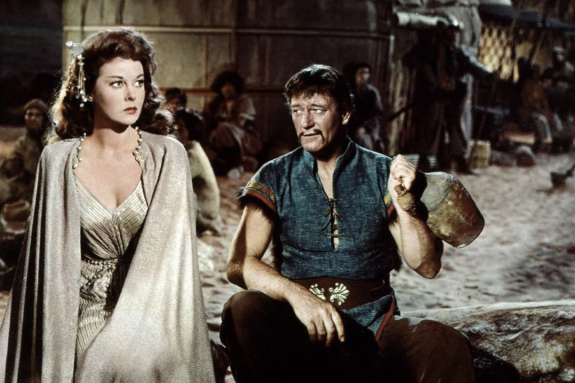 I'm not sure about Hayward but Wayne, believe it or not, had really wanted to make The Conqueror. Having waited a long time for a suitable project to complete his three-picture contract with RKO, Wayne was immediately enthusiastic about The Conqueror after Dick Powell had asked him to read the script. In a letter to Howard Hughes written in April 1954 -- at the time Hughes was head of RKO -- Wayne shows his excitement about the script while being less enthused about other projects suggested to him, like The Silver Horde (meant as a sequel to The Spoilers (1942)) and The Long Wire which was also to be directed by Powell (both projects were abandoned).

Seen below is a small excerpt from Wayne's 4-page letter to Hughes, i.e. the part that deals with The Conqueror, in which Wayne says he has a good feeling about the project, comparing it to other films he did such as Stagecoach (1939) and The Quiet Man (1952). Wayne would later admit the film was a big mistake and regretted playing Genghis Khan for the rest of his life. He reportedly said that the moral of the film was "not to make an ass of yourself trying to play parts you're not suited for."

Now I come to the pleasant part. Last week Dick Powell asked me to read a script called "The Conqueror". As I read it I kept telephoning Dick of my honest enthusiasm. If my quarter of a century of experience in this business means anything, I am positive this can be a very important, powerful picture. This is the first script (and it is only a first draft) I have read from your studio that really excites me. I have the honest feelings for this that I had when I approached pictures like "Stagecoach", "Red River", "The Quiet Man" and "Hondo".

Last Thursday I telephoned Dick in the presence of my agent and urged him to contact you right away in order to convey my thoughts about "The Conqueror", and to ask you to give him the green light on it. At best we're another three months from the completion of this assignment. I'm quite sure I can convince Dick - and you, if you wish - that the cost of this picture would be no more than "The Long Wire", and the possible profits and showmanship are four to one in favor of "The Conqueror".


While The Conqueror did relatively well at the box-office, it failed to earn back its $6 million investment. The film was a critical flop and, as said, is now considered one of the worst films ever made. It is listed in The Official Razzie Movie Guide as being one of 'The 100 Most Enjoyably Bad Movies Ever Made', mainly thanks to the bizarre casting of John Wayne and the unintentionally funny dialogue. To this I must add that the film is not all bad, it still has a few redeeming features, i.e. the music score by Victor Young as well as the cinematography by Joseph LaShelle, Leo Tover, Harry J. Wild and William Snyder.

A concluding note: The Conqueror is now probably best remembered for the many cancer cases among its cast and crew members, often attributed to nuclear tests that had been executed at 137 miles (220 km) from the film location (the Utah desert) in 1953. During the production of the film, the cast and crew were exposed to radioactive fallout, even though the site had been deemed safe. By 1980, 91 of the 220 cast and crew members had some form of cancer and 46 had already died of it, including John Wayne, Susan Hayward, Agnes Moorehead and Dick Powell. While it was never proven that the nuclear fallout had indeed caused the cancer cases, Howard Hughes reportedly felt so guilty about the whole affair that he spent $12 million buying every existing copy of the film. The film was taken out of circulation and wasn't even shown on television until Universal purchased the film rights in 1979.

This post is my contribution to THE SECOND SO BAD IT'S GOOD BLOGATHON, hosted by TAKING UP ROOM. Click here, here and here for all the other entries! 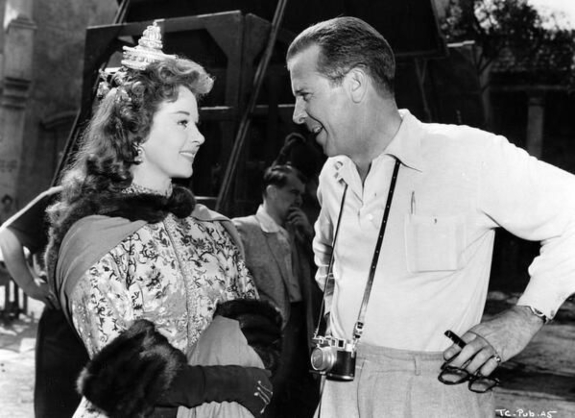 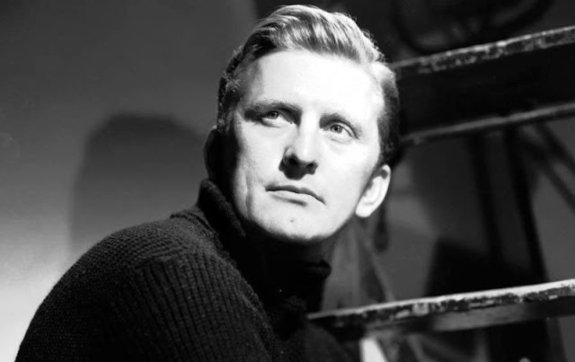 Douglas had different memories of his first and only collaboration with Barbara, saying in his autobiography The Ragman's Son (1988): "The crew adored her. They called her 'Missy,' and when she came on the set she went around hugging them, asking about their wives and children by name. But she was indifferent to me. Crew members need attention, but who needs help more than somebody working on his first picture? Several weeks later she noticed me. I could see it happening, like the lens of a camera turning into focus. She looked at me, made eye contact for the first time. She said, 'Hey, you're pretty good.' I said, 'Too late, Miss Stanwyck.' I don't think she knew what I meant. But after that, we became friends."

Here is a cute little note from Kirk to Barbara, who was his first on-screen love. According to Bonhams (the auction house that sold the note) it was likely sent before Barbara's 1981 Tribute at Lincoln Center or her 1987 AFI Salute. 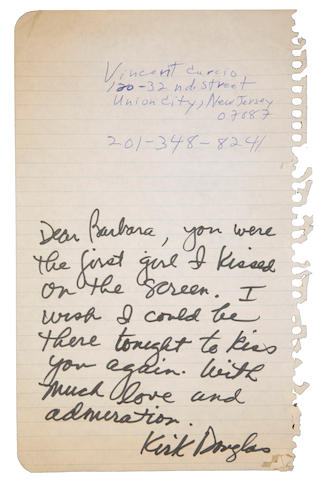 Dear Barbara, you were the first girl I kissed on the screen. I wish I could be there tonight to kiss you again. With much love and admiration.
Kirk Douglas 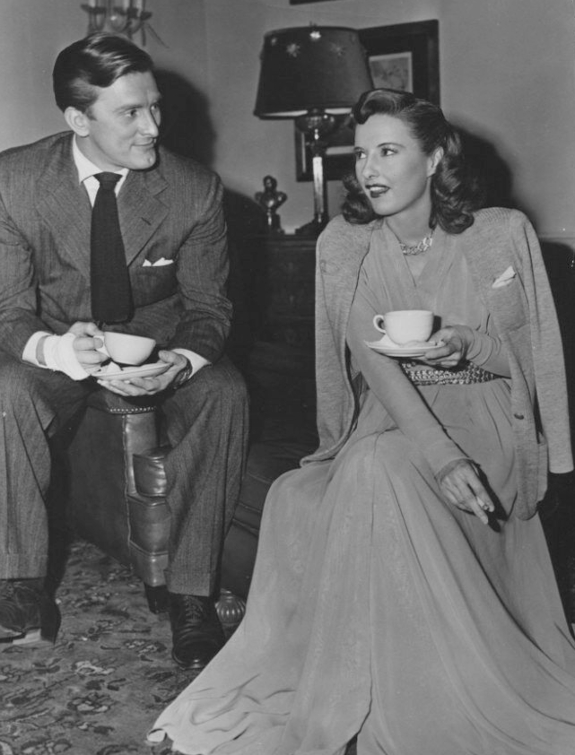 Missy and The President

Barbara Stanwyck and Ronald Reagan made one film together, the (only mildly interesting) western Cattle Queen of Montana (1954). In a letter to Ella Smith dated 16 May 1972, Reagan (then governor of California) talks about the film and how it was to work with a "pro" like Barbara. (More letters to Ella Smith, author of the biography Starring Miss Barbara Stanwyck, regarding Barbara's consummate professionalism can be found here).

Apart from Reagan's letter to Smith, also seen below is a correspondence between Barbara and "Ronnie" from 1981 following Barbara's tribute at the Film Society at Lincoln Center, their respective letters again referring to Cattle Queen. The letter from Barbara looks like a draft, not the actual letter she sent to the President.

Incidentally, Barbara also knew Nancy Reagan (then Davis) from when the latter was still an actress; the two women played together in East Side, West Side (1949). 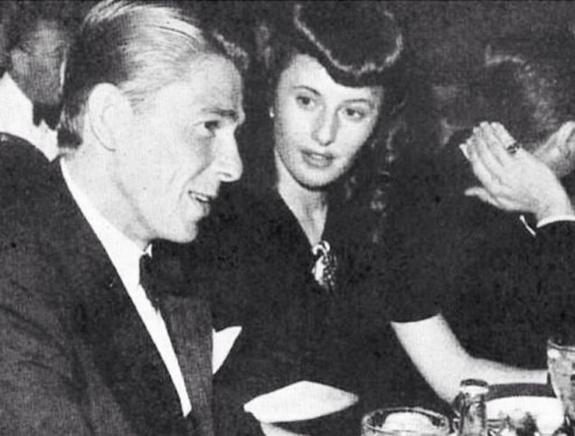 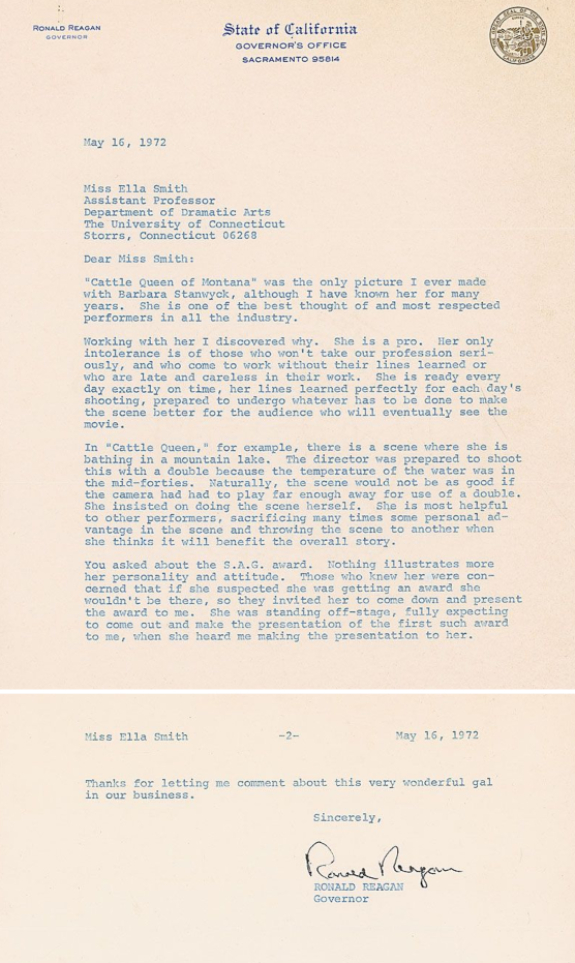 "Cattle Queen of Montana" was the only picture I ever made with Barbara Stanwyck, although I have known her for many years. She is one of the best thought of and most respected performers in all the industry.

Working with her I discovered why. She is a pro. Her only intolerance is of those who won't take our profession seriously, and who come to work without their lines learned or who are late and careless in their work. She is ready every day exactly on time, her lines learned perfectly for each day's shooting, prepared to undergo whatever has to be done to make the scene better for the audience who will eventually see the movie.

In "Cattle Queen", for example, there is a scene where she is bathing in a mountain lake. The director was prepared to shoot this with a double because the temperature of the water was in the mid-forties. Naturally, the scene would not be as good if the camera had had to play far enough away for use of a double. She insisted on doing the scene herself. She is most helpful to other performers, sacrificing many times some personal advantage in the scene and throwing the scene to another when she thinks it will benefit the overall story.

You asked about the S.A.G. award. Nothing illustrates more her personality and attitude. Those who know her were concerned that if she suspected she was getting an award she wouldn't be there, so they invited her to come down and present the award to me. She was standing off-stage, fully expecting to come out and make the presentation of the first such award to me, when she heard me making the presentation to her.

Thanks for letting me comment about this very wonderful gal in our business. 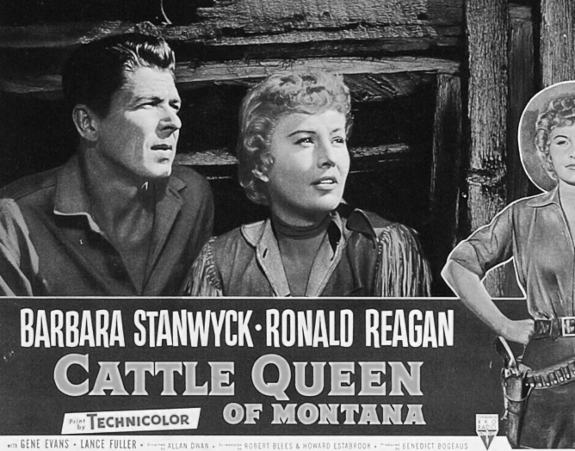 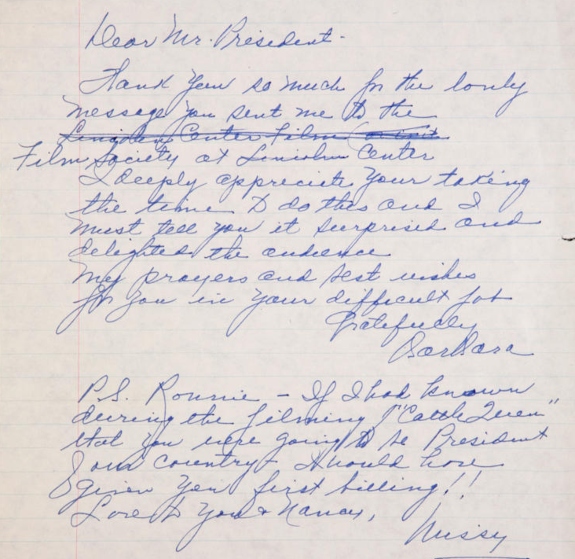 Thank you so much for the lovely message you sent me to the Film Society at Lincoln Center. I deeply appreciate your taking the time to do this and I must tell you it surprised and delighted the audience.
My prayers and best wishes for you in your difficult job.
Gratefully
Barbara

P.S. Ronnie - If I had known during the filming of "Cattle Queen" that you were going to be President of our country I would have given you first billing!!
Love to you and Nancy,
Missy 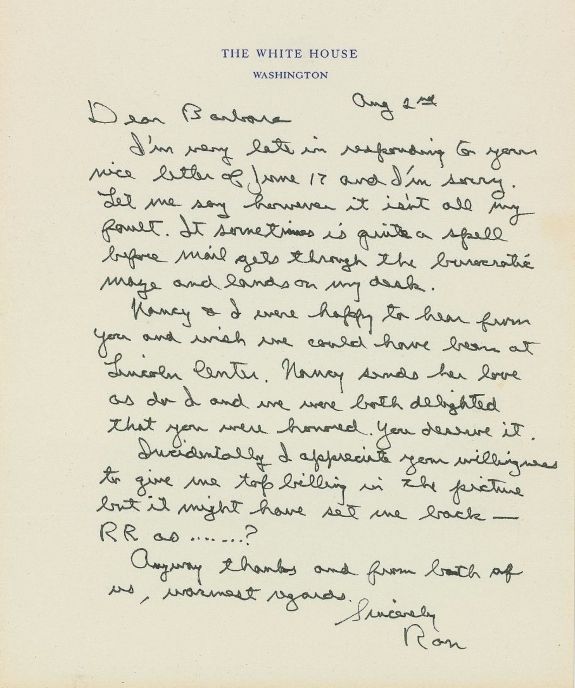 I'm very late in responding to your nice letter of June 17 and I'm sorry. Let me say however it isn't all my fault. It sometimes is quite a spell before mail gets through the bureaucratic maze and lands on my desk.

Nancy and I were happy to hear from you and wish we could have been at Lincoln Center. Nancy sends her love as do I and we were both delighted that you were honored. You deserve it.

Incidentally I appreciate your willingness to give me top billing in the picture but it might have set me back - RR as .......?

Anyway thanks and from both of us, warmest regards. 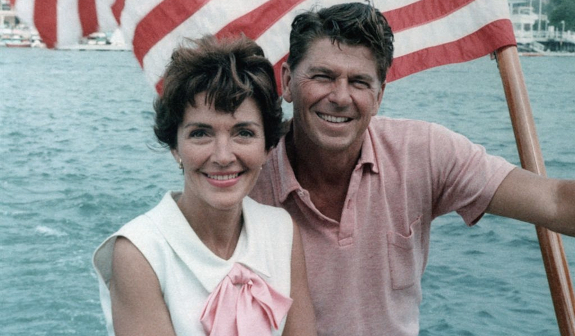