Marilyn, my girl is you

When River of No Return (1954) began its location shooting in Alberta, Canada in July 1953, it was not without difficulties. Director Otto Preminger not only had problems with Marilyn Monroe's drama coach Natasha Lytess who kept interfering with his direction*, but he also had to deal with the heavy drinking of leading man Robert Mitchum as well as frequent rainfall and dangerous conditions of the shooting location. As to the latter, Marilyn hurt her ankle after slipping on a rock and was eventually away from the set for a number of days while recovering at a hotel. (Marilyn's good friend Shelley Winters would later reveal in her autobiography that Marilyn had exaggerated the severity of her injury so that Preminger would treat her more kindly.) Apart from this delay, Marilyn also held up production in her more usual way. Preminger later recalled: "Some of it had to be done in short takes because she couldn't remember her lines. I didn't want to spend my entire life in Canada." 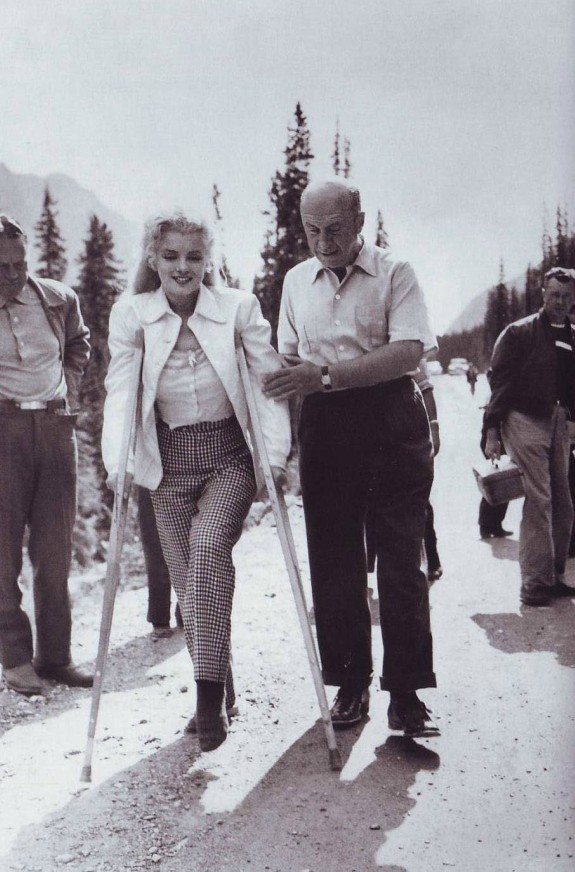 To apologise for the delay caused by Marilyn and to thank Robert Mitchum for his cooperation with the retakes, 20th Century-Fox boss Darryl Zanuck (who openly disliked Marilyn) wrote Mitchum a letter on 10 December 1953. After reading Zanuck's letter, Mitchum probably felt protective of Marilyn and added remarks to the letter to show his support, i.e. the word "Dig!!!" and on the back of the letter he wrote: "Marilyn- Your girl is my girl, and my girl is you - Ever- Bob". Mitchum probably gave the letter to Marilyn afterwards. (The letter was sold in 2016 as part of a big Marilyn Monroe auction and is likely to have been one of the personal documents Marilyn once owned.)

Incidentally, Mitchum knew Marilyn from when she was still Norma Jean and he was working with her first husband Jim Dougherty at the Lockheed Aircraft plant; to learn more about how Mitchum first met Marilyn and to hear him talk lovingly about her, watch this clip. 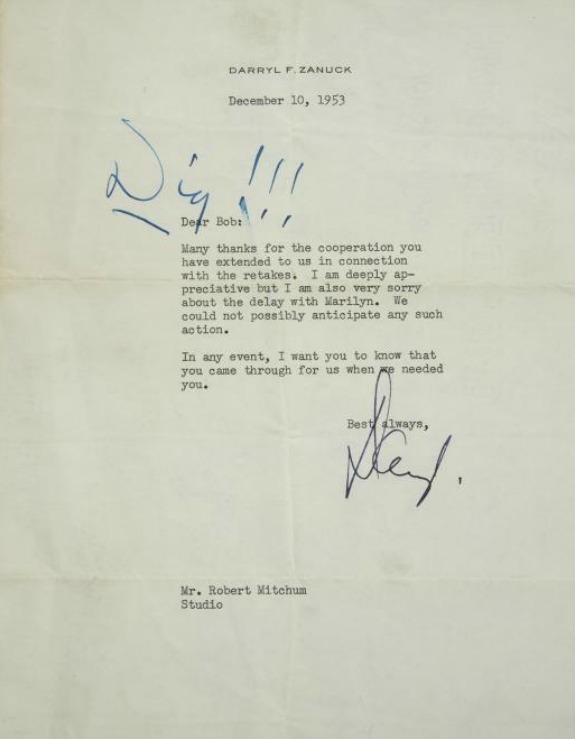 Many thanks for the cooperation you have extended to us in connection with the retakes. I am deeply appreciative but I am also very sorry about the delay with Marilyn. We could not possibly anticipate any such action.

In any event, I want you to know that you came through for us when we needed you.

Marilyn-
Your girl is my girl, and my girl is you -

*Note: Marilyn Monroe, who was River of No Return's biggest star, insisted on having her acting coach Natasha Lytess present on the set, much to the dismay of director Preminger. Lytess interfered with his direction, mostly by teaching Marilyn to over-enunciate each syllable of each word which caused her to make abnormal lip movements. When Lytess also tried to influence child actor Tommy Rettig, Preminger banned her from the set. Marilyn then complained to Darryl Zanuck who, knowing that without Marilyn there would be no box-office hit, had no other choice than to overrule Preminger. Lytess was allowed back on the set, and from then on Preminger directed Marilyn mostly through Robert Mitchum or his assistant director. 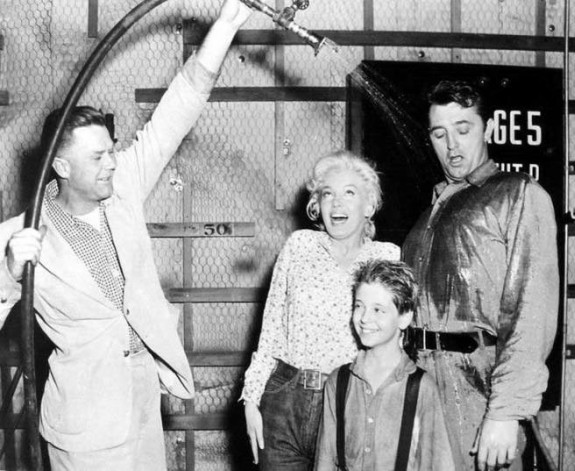 The censorship of advertising

During the heydey of Hollywood, film studios were required to submit all film advertising (publicity stills, posters, press books, trade paper material, trailers etc.) to the Advertising Advisory Council for approval. The AAC, created in November 1933 as a division of the MPDDA (aka the Hays Office), reviewed the submitted material and rejected anything which was considered objectionable. Publicity agent Jeff McCarthy was the AAC's first chief, in charge of AAC operations at the New York headquarters. (McCarthy died in 1937 and was succeeded by his assistant Lester Thompson.) There was also a subdivision of the Council in Hollywood which was headed by Joseph Breen, future head of the PCA.

Seen below are four letters concerning the censorship of advertising material, taken from the wonderful MPPDA Digital Archive of the Flinders University, Australia.

First up is a letter dated 6 December 1933 (less than a month after the creation of the AAC), written by Robert Gillham (Head of Publicity at Paramount Pictures) to Jeff McCarthy, following the rejection of several film stills. Gillham protests the decision as he doesn't believe that "stills of girls showing their legs are salacious" nor that "girls photographed in underwear, in certain instances, is salacious or objectionable". He also feels that there's a need for clearer guidelines in order to keep the still departments from taking objectionable stills in the future. 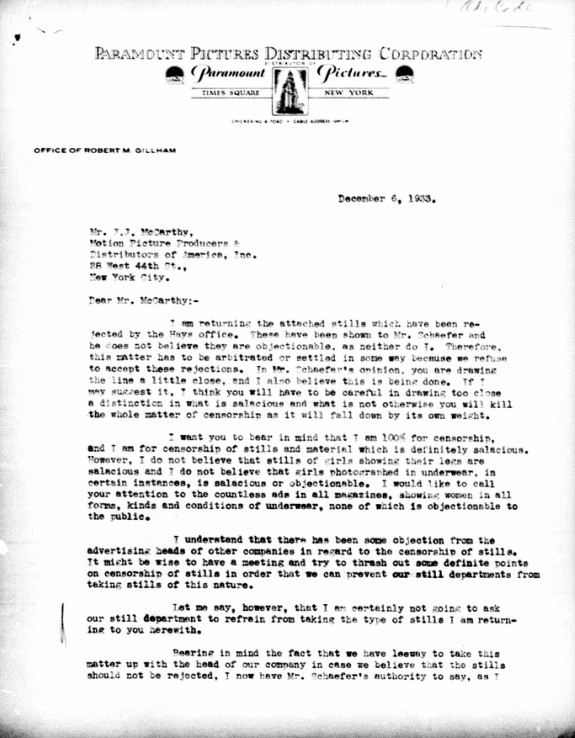 I am returning the attached stills which have been rejected by the Hays Office. These have been shown to Mr. Shaefer and he does not believe they are objectionable, as neither do I. Therefore, this matter has to be arbitrated or settled in some way because we refuse to accept these rejections. In Mr. Shaefer's opinion, you are drawing the line a little close, and I also believe this is being done. If I may suggest it, I think you will have to be careful in drawing too close a distinction in what is salacious and what is not, otherwise you will kill the whole matter of censorship as it will fall down by its own weight.

I want you to bear in mind that I am 100% for censorship, and I am for censorship of stills and material which is definitely salacious. However, I do not believe that stills of girls showing their legs are salacious and I do not believe that girls photographed in underwear, in certain instances, is salacious or objectionable. I would like to call your attention to the countless ads in all magazines, showing women in all forms, kinds and conditions of underwear, none of which is objectionable to the public.

I understand that there has been some objection from the advertising heads of other companies in regard to the censorship of stills. It might be wise to have a meeting and try to thrash out some definite points on censorship of stills in order that we can prevent our still departments from taking stills of this nature.

Let me say, however, that I am certainly not going to ask our still department to refrain from taking the type of stills I am returning to you herewith.

Bearing in mind the fact that we have leeway to take this matter up with the head of our company in case we believe that the stills should not be rejected, I now have Mr. Shaefer's authority to say, as I stated before, that he does not want these stills rejected. Where do we go from here?

With best regards, I am 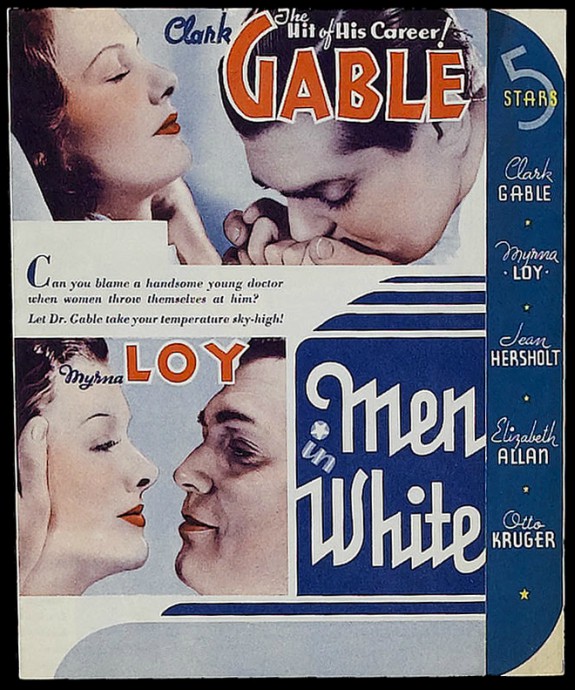 The following two letters concern advertising material for Men in White (1934), starring Clark Gable and Myrna Loy. In a letter to MGM's Frank Whitbeck, dated 16 January 1934,  John  Lewis (assistant to Joseph Breen at the Hollywood branch of the AAC) gives approval for two art displays to be used in billboard posters. In another letter to Whitbeck written a week later, Lewis withdraws his approval, having decided that the two sketches were in violation of the advertising code after all.

We have inspected and approved two art displays to be used in 24-sheets in the advertising of MEN IN WHITE with Clark Gable, Myrna Loy and Elizabeth Allan.

We have taken into consideration that Myrna Loy is portrayed in an horizontal position in these displays, although fully clothed, but that the character of the art is passable, inasmuch as Clark Gable is clothed in his doctor's uniform, wears a stethoscope and obviously is performing the duties of a doctor.

We also approve the eleven advertising lay-outs on MEN IN WHITE after having inspected the three changes which you made in this office at our request.

This is to confirm our conversation via the telephone in which I informed you that it would be necessary to withdraw approval of two sketches for use in 24-sheets on MEN IN WHITE, which were submitted to this office on January 16th.

These two sketches portrayed Myrna Loy in an horizontal position with Clark Gable leaning over her. These sketches are violations of the advertising code under the heading pertaining to horizontal stills, and, therefore, rejectionable.

Would you be kind enough to acknowledge this letter?

With all good wishes, I am, 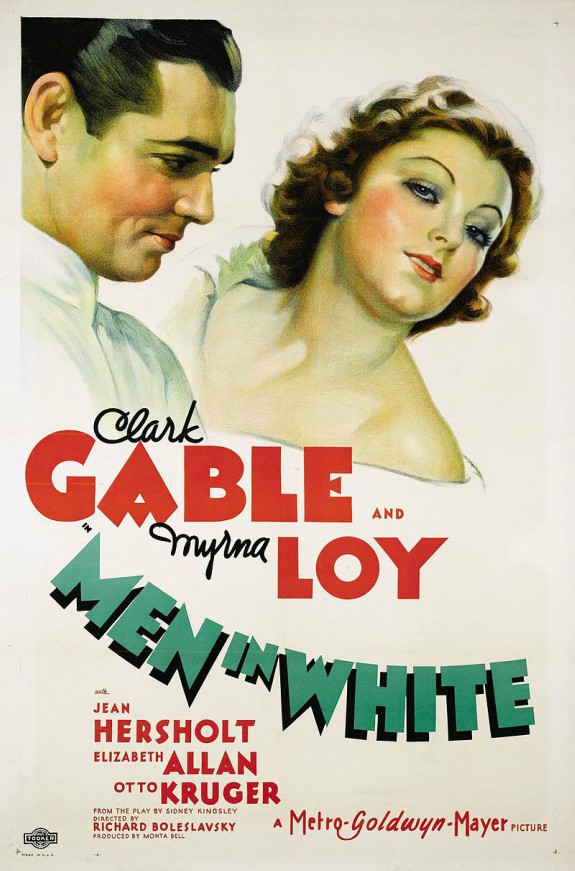 The final letter was written by Lester Thompson, Jeff McCarthy's assistant in New York, to John Lewis in Hollywood. The letter deals with the advertising of two films, Guilty Parents (1934) and Thirty Day Princess (1934). Thompson had been alerted to a large ad of Guilty Parents a few days earlier, showing risqué taglines like: "Did you ever see a strip-poker party?", "Exposes the crime horror of illicit love" and "What goes on in parked cars?" Trying to find more information on who was responsible for the ad, Thompson asks for Lewis' assistance. As to Thirty Day Princess, Thompson was at first hesitant about whether to approve a still of a "petting scene with the girl's arm up around the man's neck" but eventually gave his OK.

[Note: As is apparent from the letter by Thompson and the letters above by Lewis, it wasn't always easy to determine whether advertising material should be rejected or not (certainly in the early days of the AAC). Also, the two AAC branches didn't always see eye to eye on these matters. Material approved by Lewis was sometimes rejected by Thompson, and the other way around. (The still of Thirty Day Princess was probably first rejected by Lewis.) For further reading on the inconsistency of the AAC decisions, click here.]

I wrote you a day or so ago regarding an "indie" picture, GUILTY PARENTS. We are checking up on this and any information which you can give us by return airmail will be appreciated. All our records show is that it was produced by a Ben S. Cohen and submitted to the New York Censorship Board on October 3, 1933, at which time it was turned down.

At the continued insistence of Robert M. Gillham of Paramount, we reviewed a still on THIRTY DAY PRINCESS, key number 990-26. Personally, I did not think it warranted a rejection. However, that might have been my private opinion. In the absence of Mr. McCarthy, I took this still to Mr. McKenzie and our joint verdict was that it would just slip by. We, therefore, okayed it and notified Gillham, and I promised him that I would write you to this effect. If you do not recall the still, it is a petting scene with the girl's arm up around the man's neck. As Mr. McKenzie pointed out, if they were in a hot embrace it would be highly objectionable, but in the circumstances, we thought it okay.

Your still report and letter of March 12th just received. I am glad to note that you are straightening things out with Paramount.

Under separate cover, I am mailing you today the following completed and okayed books:

Warners: "Jimmy the Gent", "Journal of a Crime"
Paramount: "Wharf Angel", "Come on, Marines"
Fox: "Stand Up and Cheer", "Constant Nymph", "Three on a Honeymoon"

With all best regards, I remain,