Peter O'Toole is it!

In February 1962, for a then record amount of $5.5 million, Warner Bros. obtained the rights to produce the film version of the successful stage musical My Fair Lady (1956). For the role of Professor Henry Higgins, studio boss Jack Warner initially didn't want to hire Rex Harrison, although the actor had successfully played Higgins on Broadway. Warner not only considered Harrison too old for the part but also felt he lacked drawing power at the box-office.
An actor who was in demand at the time was Peter O'Toole. He was much younger than Harrison and had just played the titular role in Lawrence of Arabia (1962), David Lean's epic film which would become a huge critical and financial hit. Both Warner and director George Cukor thought O'Toole was the right man to play Higgins and next tried to hire him. In Europe Cukor even met with the actor who (according to Cukor) was "crazy" about the part. In the end, however, O'Toole proved too expensive for Warners. His agent demanded a salary of $400,000 which Warners wasn't willing to pay and negotiations ultimately fell through.
Cary Grant (believe it or not) was also offered the part but he declined, convinced that Rex Harrison should be cast. And indeed, Harrison was cast and eventually delivered an Oscar-winning performance. (Harrison was paid $200,000, half of O'Toole's asking price.) 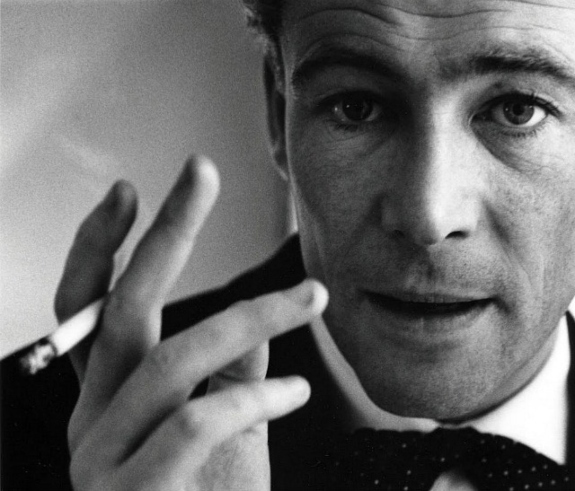 Here is part of a letter which George Cukor wrote to his secretary and friend Irene Burns on 11 September 1962. The fragment deals with Peter O'Toole and shows how excited Cukor was for the actor to play Henry Higgins. While O'Toole didn't get to play Higgins in the film musical, later in his career he would star as the professor twice, i.e. in the 1983 television movie Pygmalion with Margot Kidder as Eliza Doolittle; and in 1987 in a new Broadway production of Pygmalion with Amanda Plummer starring as Eliza. (As you undoubtedly know, My Fair Lady —book and lyrics by Alan Jay Lerner and music by Frederick Loewe— is based on George Bernard Shaw's 1913 play Pygmalion.) For those interested, click here for the full 1983 television film with O'Toole as Higgins and Margot Kidder as Eliza. 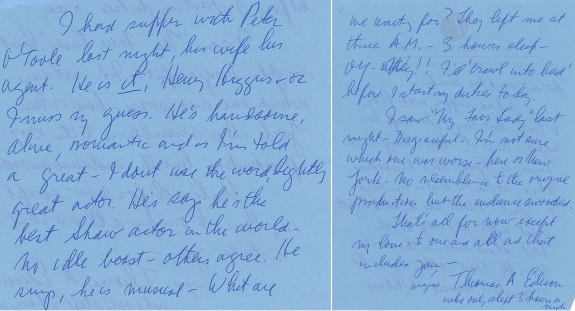 Source: liveauctioneers
Transcript:
I had supper with Peter O'Toole last night, his wife, his agent. He is it, Henry Higgins — or I miss my guess. He's handsome, alive, romantic and as I'm told a great — I don't use the word lightly, great actor. He says he's the best Shaw actor in the world — no idle boast — others agree. He sings, he is musical — What are we waiting for? They left me at three A.M. — 3 hours sleep — oy!! I'll crawl into bed before I start my duties today.
I saw "My Fair Lady" last night — Disgraceful — I'm not sure which one was worse — here or New York — no resemblance to the original production but the audience swooned.
That's all for now except my love — to one and all and that includes you —
signed
Thomas A Edison
who only slept 3 hours a night 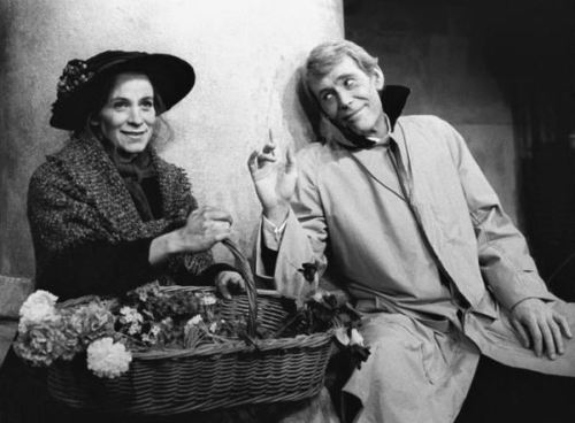 I can't wait to work with you again

Natalie Wood and Tony Curtis made three films together, i.e. the WWII drama Kings Go Forth (1958) and the two comedies Sex and the Single Girl (1964) and The Great Race (1965). Curtis later said that he and Wood became great friends and claimed in his autobiography American Prince (2008) that they were also romantically involved during production of The Great Race*. In her book Natasha: The Biography of Natalie Wood, published several years prior to Curtis' book (in 2001), Suzanne Finstad said that the two actors were not on the best of terms while shooting their last film. According to Finstad's sources, Curtis' ex-wife Janet Leigh and producer Martin Jurow, Curtis and Wood had become "estranged" some time between the end of Sex and the Single Girl and the start of The Great Race. Jurow said that during the shoot of The Great Race Curtis' behaviour towards Wood was "very juvenile" ("like little boys in the playground pick on certain little girls ...") and at one point they even stopped speaking to each other. Wood biographer Gavin Lambert (Natalie Wood: A Life, 2004) never mentioned a friendship or estrangement between the two but stated that from their first film on Wood had found Curtis "agressively self-important".
*While Curtis liked to boast about his affairs with famous actresses, I'm always inclined to take his stories with a pinch of salt, especially when the women involved were no longer alive to confirm or deny his claims, like Natalie Wood or Marilyn Monroe. 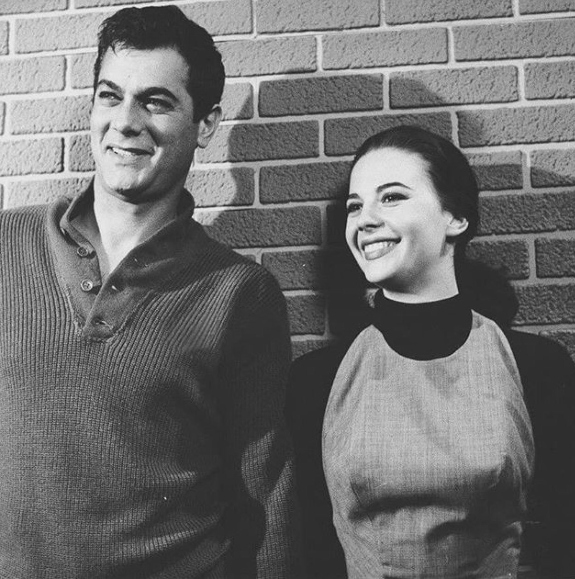 Well, whatever the relationship between them, Wood wrote Curtis this sweet (undated) note after her first day at work on either Sex and the Single Girl or The Great Race. She thanked Curtis for his flowers and also told him that she was looking forward to working with him again. (Obviously I don't know whether she was being truthful or not.) 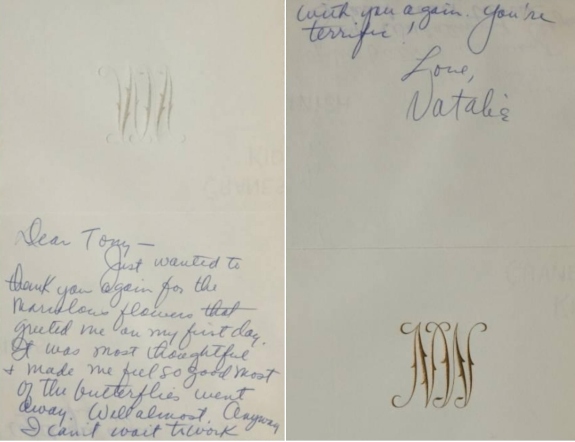 Source: Julien's Auctions
Transcript:
Dear Tony —
Just wanted to thank you again for the marvelous flowers that greeted me on my first day. It was most thoughtful + made me feel so good most of the butterflies went away. Well almost. Anyway I can't wait to work with you again. You're terrific!
Love,
Natalie
Posted by Clarissa Saunders No comments:
Tags: Natalie Wood, Tony Curtis

Send this minor masterpiece whizzing through the film exchanges of America

In December 1948, production wrapped on Irving Cummings' It's Only Money, a RKO comedy starring Jane Russell, Groucho Marx and Frank Sinatra. The film was not released right away, despite positive preview screenings and a fair amount of publicity in the film magazines. RKO boss Howard Hughes decided to put the film on the shelf, where it subsequently sat for three years. (Why Hughes chose not to release it remains unclear; it has been said that his intense dislike of Frank Sinatra —the men had a shared interest in Ava Gardner— may have been a motive.)

Someone who didn't like the picture being shelved was Groucho Marx. After performing with his brothers for decades, Groucho was working on his solo career and therefore eager to have It's Only Money released. In January 1951, two years after filming had ended, Groucho wrote to Howard Hughes and asked him to finally get "this minor masterpiece" off the shelf and into film theatres. It's not clear if Groucho's letter had anything to do with it but eleven months later the film was released. Hughes had given the picture a different title, though, i.e. Double Dynamite, apparently a reference to Russell's breasts. Due to Hughes' resentment towards Sinatra, Sinatra received third billing and his face didn't even appear on the film poster. 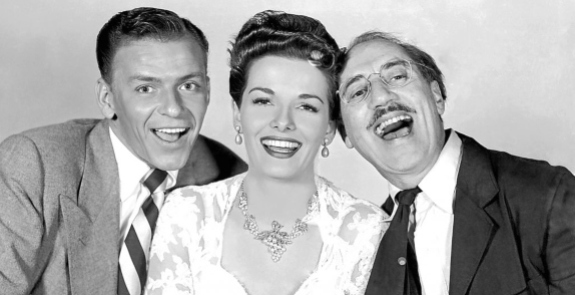 Double Dynamite was released in December 1951, receiving negative reviews and bad box-office results. Years later, Groucho said that with the film "[his] acting career almost went down the drain" while co-star Jane Russell dryly commented: "He [Sinatra] was playing a dumb little guy and I was playing a dumber little girl and it was a stupid picture, but we sang in it." (To watch and listen to the songs, click here for It's Only Money, sung by Sinatra and Groucho, and here for Kisses and Tears by Sinatra and Russell.)

In January 1951, Groucho wrote the following letter to Howard Hughes, perhaps later wishing he had never sent it.

January 23, 1951
Dear Mr. Hughes:
Between retooling for the war effort and dueling with Wald and Krasna, I presume you are a fairly busy man. However, I wonder if you could spare a few moments to release a picture that was made some years ago involving Jane Russell, Frank Sinatra and your correspondent. The name of the picture, if memory serves, is "It's Only Money". I never did see it but I have been told that at its various previews it was received with considerable enthusiasm.
I am not a young man any more, Mr. Hughes, and before I shuffle off this mortal coil if you could see your way clear to pry open your strong box and send this minor masterpiece whizzing through the film exchanges of America, you would not only have earned my undying gratitude but that of the United Nations, the popcorn dealers of America and three RKO stockholders who at the moment are trying to escape from the Mellon bank of Pittsburgh.
Sincerely,
Groucho Marx

Source: The Groucho Letters: Letters from and to Groucho Marx (1967) 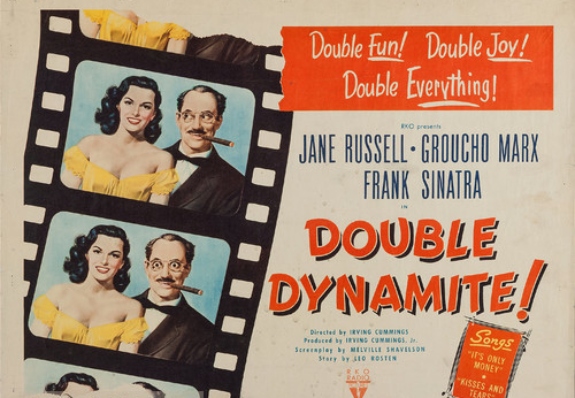