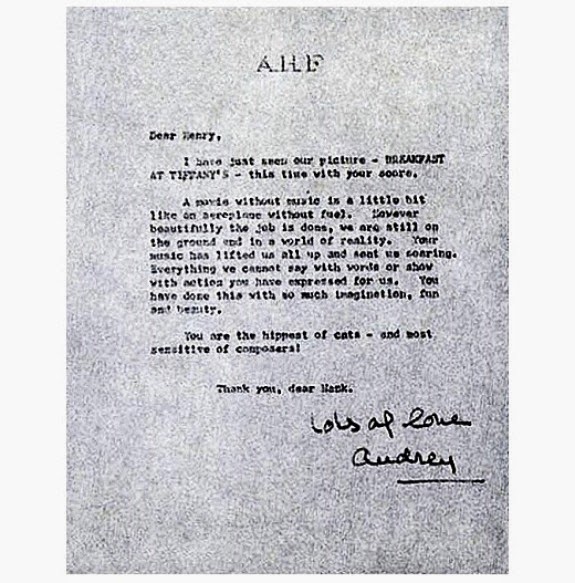 I have just seen our picture- BREAKFAST AT TIFFANY'S- this time with your score.

A movie without music is a little bit like an aeroplane without fuel. However beautifully the job is done, we are still on the ground and in a world of reality. Your music has lifted us all up and sent us soaring. Everything we cannot say with words or show with action you have expressed for us. You have done this with so much imagination, fun and beauty.

You are the hippest of cats- and most sensitive of composers! 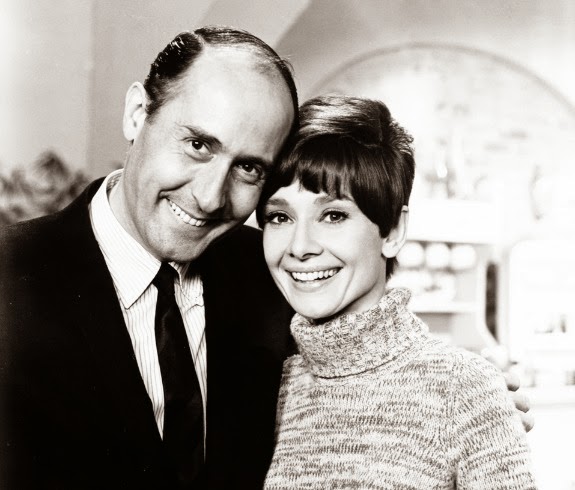 "I might of course have married Olivia de Havilland!"

Richard Burton's Hollywood career was launched in 1952 with the lead role in My cousin Rachel. The man responsible for his American debut was George Cukor, who had seen Burton perform in the play Montserrat and wanted him to star in his new film My cousin Rachel. Cukor himself eventually withdrew from the project (being unhappy with the script), but Burton continued under Henry Koster's direction, earning himself his first Oscar nomination. 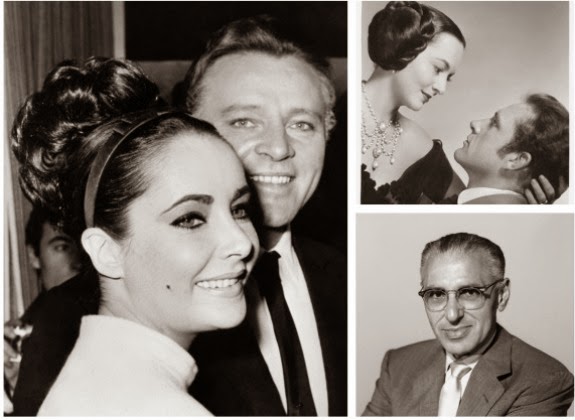 The following note from Richard Burton to George Cukor is undated, but must have been written after 1964 when Burton married Elizabeth Taylor for the first time. In the note, Burton jokes about marrying Olivia de Havilland instead of Elizabeth. De Havilland was Burton's co-star in My cousin Rachel and one of the leading ladies he presumably slept with. (It is reported that Julie Andrews, Burton's co-star in Camelot on Broadway, was his only leading lady he hadn't slept with.) In any case, here is Burton's note to George Cukor, whom he thought was "an infinitely wicked and lovable man as well as being, at his best, one of the very fine directors" (according to Melvyn Bragg's 1988 biography on Richard Burton). 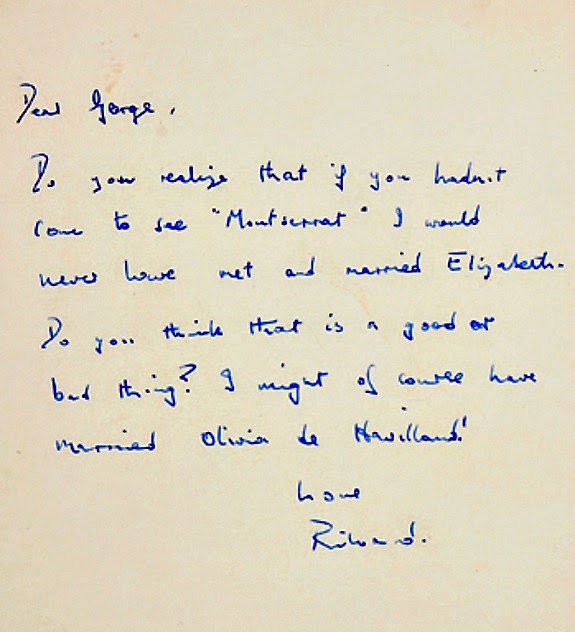 Do you realize that if you hadn't come to see "Montserrat" I would never have met and married Elizabeth? Do you think that is a good or bad thing? I might of course have married Olivia de Havilland!

Chaplin's support for The Hollywood Ten

The late 1940s and early 1950s are often referred to as the darkest years in Hollywood history. During this period, also known as the McCarthy era, anyone suspected of having communist ties was investigated. In 1947, the HUAC (House on Un-American Activities Committee) began its investigations into Hollywood communism through high-profile, public hearings at which people in the film industry were forced to testify. Ten screenwriters and directors, later known as The Hollywood Ten, refused to cooperate with the HUAC and were consequently sent to prison for contempt of Congress and blacklisted. Screenwriter John Howard Lawson was one of The Hollywood Ten, appearing before the HUAC on 29 October 1947 (interesting footage of Lawson's testimony can be seen here). Found guilty of contempt of Congress, Lawson spent a year in prison and was fined $1,000. After his release from prison, he moved to Mexico where he continued to work under pseudonyms.

Along with The Hollywood Ten, more than 300 artists (actors, directors, but mainly screenwriters) were blacklisted. Charlie Chaplin, known for his communist sympathies since WWII, was one of them. He was forced to settle in Europe after he had gone to England in 1952 and his reentry permit to the U.S. was revoked. On 9 September 1955, having taken up residence in Switzerland, Chaplin wrote a letter to his friend John Howard Lawson. In the letter Chaplin not only praises Lawson for his courageous actions, but also conveys his concern on America's political climate. 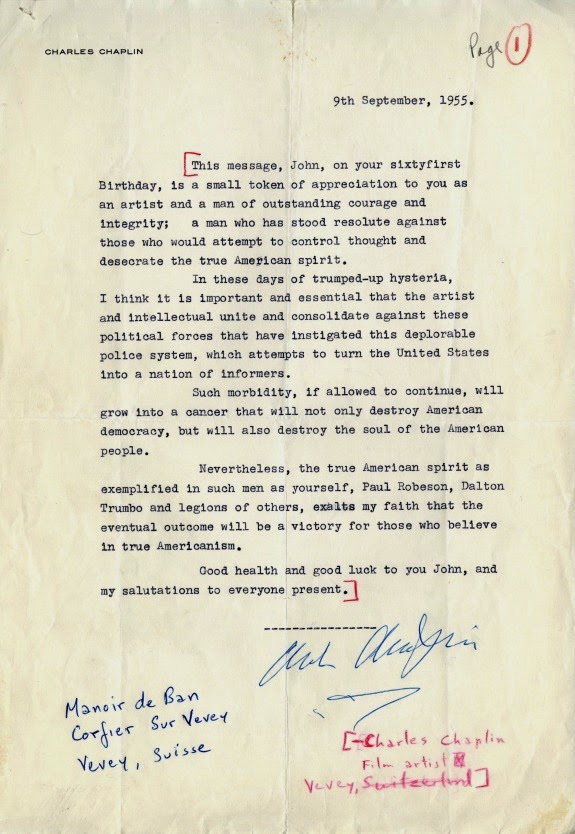 This message, John, on your sixtyfirst Birthday, is a small token of appreciation to you as an artist and a man of outstanding courage and integrity; a man who has stood resolute against those who would attempt to control thought and desecrate the true American spirit.
In these days of trumped-up hysteria, I think it is important and essential that the artist and intellectual unite and consolidate against these political forces that have instigated this deplorable police system, which attempts to turn the United States into a nation of informers.
Such morbidity, if allowed to continue, will grow into a cancer that will not only destroy American democracy, but will also destroy the soul of the American people.
Nevertheless, the true American spirit as exemplified in such men as yourself, Paul Robeson, Dalton Trumbo and legions of others, exalts my faith that the eventual outcome will be a victory for those who believe in true Americanism.
Good health and good luck to you John, and my salutations to everyone present.

Note: the handwritten address and comment were, judging by the handwriting, not added by Chaplin himself.

When I think of great Hollywood costume designers, I immediately think of famous designers like Edith Head or Adrian. William Travilla is a name I had not heard of before, but of course I know his designs. Travilla is probably best known for his work in the 1950s when he was under contract to Twentieth Century-Fox. He is mainly associated with Marilyn Monroe, having dressed her in eight of her films (best remembered are his iconic dresses from Gentlemen Prefer Blondes (1953) and The Seven Year Itch (1955)).

Prior to working for Twentieth Century-Fox, Travilla had worked at Warner Bros. for three years. One of the films he did at Warner Bros. was the swashbuckler Adventures of Don Juan (1949), starring Errol Flynn. On 4 May 1948, while Don Juan was still in production, Errol Flynn sent a telegram to Travilla regarding his work on the film. Flynn couldn't have known then that two years later, on 23 March 1950, his pal would be awarded the Oscar for Best Costume Design (along with colleagues Leah Rhodes and Marjorie Best). It would be the only Oscar of Travilla's career. 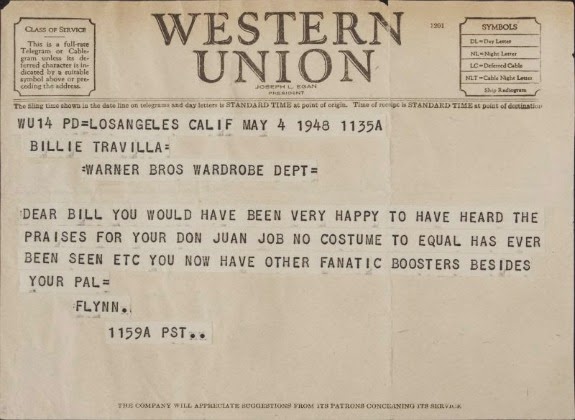 One of the most famous lines in movie history is without a doubt "Frankly, my dear, I don't give a damn", spoken by Clark Gable in David O. Selznick's production of "Gone with the Wind" (1939). In 1939, with the Production Code in full swing, use of the word 'damn' was nevertheless strictly forbidden. So how did it get past the censors and end up on the big screen?

A few months prior to the release of "Gone with the Wind", Joseph Breen (head of the PCA and responsible for the enforcement of the Code) had disallowed the word 'damn' and wanted it removed from the movie. Alternatives like "I don't give a hoot" or "I just don't care" were considered, but producer David Selznick was adamant about keeping 'damn' in his crucial scene. In a final attempt to get his way, Selznick wrote a letter to Will Hays (Joseph Breen's boss) pleading with him not to forbid 'damn'. Hays proved sensitive to Selznick's arguments. On 1 November 1939 (a month and a half before the film's release), the Production Code was amended. 'Damn' was still forbidden, unless it was "essential and required for portrayal, in proper historical context, of any scene or dialogue based upon historical fact or folklore...or a quotation from a literary work, provided that no such use shall be permitted which is intrinsically objectionable or offends good taste".

Selznick's fascinating letter to Hays can be read below. 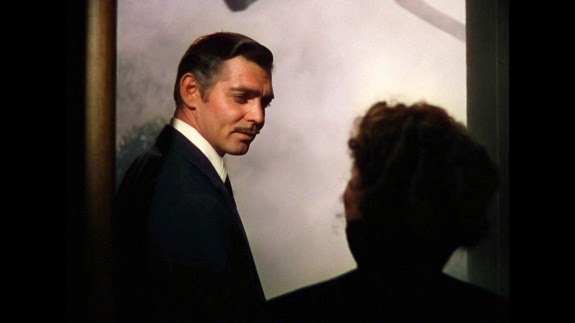 As you probably know, the punch line of "Gone With the Wind", the one bit of dialogue which forever establishes the future relationship between Scarlett and Rhett, is, "Frankly, my dear, I don't give a damn."

Naturally I am most desirous of keeping this line and, to judge from the reactions of two preview audiences, this line is remembered, loved and looked forward to by the millions who have read this new American classic.

Under the code, Joe Breen is unable to give me permission to use this sentence because it contains the word "damn," a word specifically forbidden by the code.

As you know from my previous work with such pictures as "David Copperfield," "Little Lord Fauntleroy," "A Tale of Two Cities," etc., I have always attempted to live up to the spirit as well as the exact letter of the producers' code. Therefore, my asking you to review the case, to look at the strip of film in which this forbidden word is contained, is not motivated by a whim. A great deal of the force and drama of "Gone With the Wind", a project to which we have given three years of hard work and hard thought, is dependent upon that word.

It is my contention that this word as used in the picture is not an oath or a curse. The worst that could be said against it is that it is a vulgarism, and it is so described in the Oxford English Dictionary.  Nor do I feel that in asking you to make an exception in this case I am asking for the use of a word which is considered reprehensible by the great majority of American people and institutions. A canvass of the popular magazines shows that even such moral publications as Woman's Home Companion, Saturday Evening Post, Collier's and the Atlantic Monthly, use this word freely. I understand the difference, as outlined in the code, between the written word and the word spoken from the screen, but at the same time I think the attitude of these magazines toward "damn" gives an indication that the word itself is not considered abhorrent or shocking to audiences.

I do not feel that your giving me permission to use "damn" in this one sentence will open up the flood-gates and allow every gangster picture to be peppered with "damns" from end to end. I do believe, however, that if you were to permit our using this dramatic word in its rightfully dramatic place, in a line that is known and remembered by millions of readers, it would establish a helpful precedent, a precedent which would give to Joe Breen discretionary powers to allow the use of certain harmless oaths and ejaculations whenever in his opinion they are not prejudicial to public morals.

Since we are trying to put "Gone With the Wind" into the laboratory this week, I should appreciate your taking this matter under immediate consideration. Mr. Lowell Calvert, our New York representative, has a print of the scene referred to which will take you, literally, only a few seconds to view. It is not a Movietone print, and must be exhibited with a dummy head, and therefore Mr. Calvert will have to arrange a room that is so equipped for you to see it. However, you may feel it possible to give the consent without viewing the film.

The original of the line referred to is on page 1036 of the novel, "Gone With the Wind," and you might have your secretary secure it for you.

We have been commended by preview audiences for our extremely faithful job on "Gone With the Wind," and practically the only point that has been commented on as being missing is the curious (to audiences) omission of this line. It spoils the punch at the end of this picture, and on our very fade-out gives an impression of unfaithfulness after three hours and forty-five minutes of extreme fidelity to Miss Mitchell's work which, as you know, has become an American Bible.

Thanking you for your cooperation in this,

Cordially and sincerely yours,