The human mind cannot grasp it 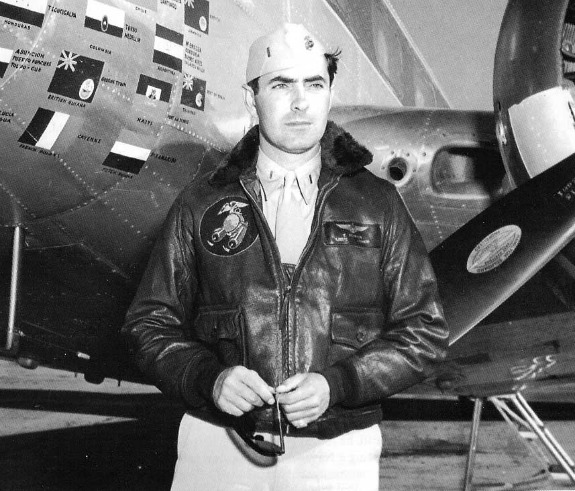 In 1942, in post-Pearl Harbor America, many Hollywood actors joined the army, including 28-year-old Tyrone Power who enlisted in the U.S. Marine Corps. Having learned to fly in 1938, Power really wanted to be a combat flyer but was considered too old for active combat duty. So he became a transport pilot, and as such was shipped out to combat zones in the Pacific in early 1945. Power flew a lot of missions transporting cargo and wounded soldiers, also during the battles of Iwo Jima (Feb-March 1945) and Okinawa (Apr-June 1945). In August 1945 after the first atomic bomb was dropped, he also flew supplies to the Marine troops in Hiroshima.

In November 1945, Power returned to the States a changed man, having witnessed the war up close. Seeking more meaningful roles, he resumed his film career with a dramatic part in The Razor's Edge (1946) and went on to make about 20 more films. In 1958, Power died unexpectedly of a heart attack at age 44; he was buried with full military honours. 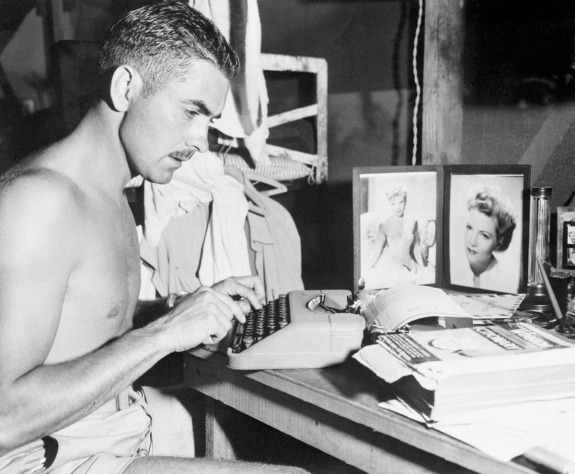 The letter for this post is a letter from Tyrone Power to his good friend J. Watson Webb, who was a Hollywood film editor (his work includes A Letter to Three Wives (1949) and The Razor's Edge (1946)). Power's letter was written on 10 August 1945, four days after the bombing of Hiroshima and one day after the bomb on Nagasaki. Apart from containing personal news, the letter naturally deals with the bomb. Also, a day earlier the Russians had invaded Japan (their invasion was decisive in ending WWII), and Power shares his thoughts on that too.


Source: tyrone-power.com
Transcript of the letter is shown below.
Click on the above link for the original image of the letter.

Had another of your wonderful letters the other day, and as usual, was so happy to hear from you. Your letters are NEVER boring, my dear friend. You should know that by now. Sometimes you have more to tell me, than at others.... but no matter what it is, I always like to hear it.

By the way, I hear we have some new neighbors out our way. The other night I saw Eddie Bracken, who is out here doing a show, and he tells me that he bought the place just up the street, across fro [sic] Coopers. getting to quite a 'tony' neighborhood.

There is not a great deal to reoprt [sic] from out here. Of course, the thought in everyone's mind, and the subject of all conversation these days is the new bomb. And it is not just the immediate effect that it is going to have on the Japs, and the war in general...... but the effect it is going to have on us all, for the rest of our lives. For as surely as I sit here writing to you tgis [sic] morning..... our whole lives have changed. They are no more tha [sic] same, than they were the day the first horseless carriage appeared. Speculation is high, as to just how long the world will last, now that they have released this force. They are well on the way to destroying it all, of course you know that. The only question everyone asks is, "How much more time do we have.... how many years?"

Yesterday I was fortunate enough to be able to see some of the pictures that were taken just after the first one was dropped. Even if I were allowed to tell you what it was like, I doubt whether I could. It actually defies description. There are no words in our poor vocabulary, at present, to draw an adequate picture of it. The human mind cannot grasp it, at present. Watty, it is simply staggering. One can only look at it, and say, "My God!".

Now, with Russia in the thing out here too, it looks as though it won't be so long after all. I must say that up to this point, I didn't have too optimistic an outlook on this whole thing. But this has changed the picture entirely. It just cannot be humanly possible for anyone, or anything to hold out very long. The question is, of course.... how many do they have? Can they get enough? Surely, they don't need many... but how many?

With us too, it's particularly in mind, for we know that they must be around here someplace. Where none of us know.... but they are here someplace. Just let them be careful, that's all I have to say.

Well, so much for that. It is something that is out of our hands, and we can't do a damn thing one way or another.... but sit and wait.

Your parties sound like great fun, and I do wish I could be there. That's a charming business about the Mac's pool. Can't they do anything about guards, or anything like that? What a graceful scene that must have been at the D. Selznicks..... but I believe we talked about that before.

The pictures of Arrowhead, I thought were wonderful, and I can understand after looking at them, how you would like to go back again. I could use a bit of that duty, myself. Also a Sunday at your pool. What I wouldn't give for some of that!

You probably know by this time that Annabella is coming out to the coast with her mother, and they are going to open the house again. I think it is the only sensible thing to do. She will have Anne, and the baby with her... and Annie, and I'm sure they will be happy. It will be like a dream for her mother. Thank God we have a place like that for them to come. She certainly deserves it after what she has been through for the past five years. Drop in on them, and do all you can. But, then, I know you will.

Saw Hank again the other day. We had a visit for about an hour. He is looking ver [sic] well, and is just 'sweating-out' his orders. I guess he and I will be in this thing 'til the last dog's hung. There certainly is a big rush for the gates though. I have heard of so many who are getting out.

Don't believe there is much other news, dear friend. Take good care of yourself, anf [sic] do let me hear from you soon. Let me know what picture you do next.

Miss Leigh seems to be the best qualified

In December 1938, a young unknown British actress named Vivien Leigh visited the set of Gone with the Wind accompanied by talent agent Myron Selznick. Myron's brother, producer David Selznick, had just started production of GWTW (the burning of Atlanta scene), even though he still hadn't found his Scarlett O'Hara yet. After being introduced to Leigh, Selznick was impressed and very quickly considered her a serious candidate for the role of Scarlett. Despite widespread protests against the casting of Leigh (being a non-Southerner), Leigh got the coveted role and signed her contract on 16 January 1939.

When word got out that Vivien Leigh was to be cast as Scarlett, David Selznick sent numerous letters to entertainment journalists to justify his decision. Shown below is Selznick's letter to Ed Sullivan (a gossip columnist at the time), written on 7 January 1939, just nine days before Leigh was officially hired. Although Selznick denied that he had chosen Leigh ("Vivien Leigh is by no means cast as Scarlett"), it is quite clear that he had already made his decision. 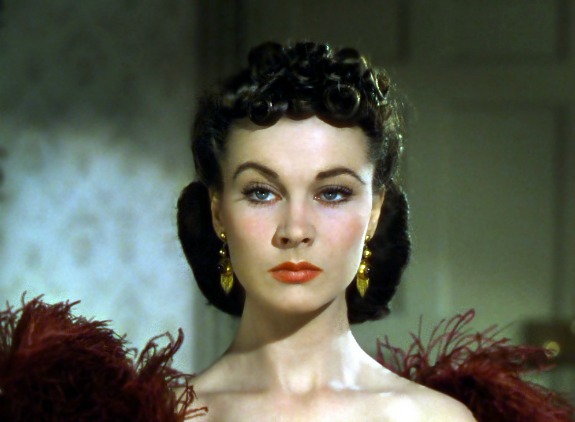 Selznick's letter is shown in transcript only.
You'll find the original image of the letter via this page.

Vivien Leigh is by no means cast as Scarlett. There are three other possibilities. But should we decide on Miss Leigh for the role, I think the following answers your question:

I feel that there are days when we should all do everything within our power to help cement British-American relationships and mutual sympathies, rather than to indulge in thoughtless, half-baked and silly criticisms. As I have said, Miss Leigh is not set for the role, but if she gets it Miss Leigh seems to us to be the best qualified from the standpoints of physical resemblance to Miss Mitchell's Scarlett, and- more importantly- ability to give the right performance in one of the most trying roles ever written. And this after a two-year search.

And if she gets the role, I like to think that you'll be in there rooting for her.

Cordially and sincerely yours,

P.S. Incidentally, just where do the carpers think the name "Georgia" came from, but from England? I suppose they'd also object to George Washington being played by an Englishman!