I was in that state where one does not remember 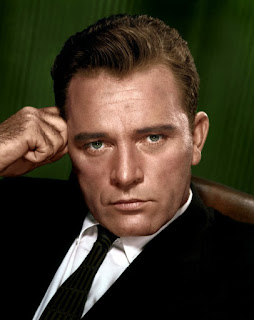 I must admit that I had never heard of Sophie Tucker, but apparently she was one of the most popular entertainers (a singer, actress and comedian) in the United States during the first half of the 20th century. Tucker was a good friend of fellow singer/actress Carol Channing, and in June 1964 she attended the premiere of Hello Dolly! on Broadway starring Channing in the leading role. After the premiere, there was a party with some of the day's biggest stars, among them Richard Burton and his then-wife Elizabeth Taylor. Burton was drinking heavily (he was known for his alcohol addiction) and after Tucker had sung a song in honour of her friend Carol, Burton stood up and slurred: "Ladies and gentlemen, up until now I thought my wife was in charge of butchering the English language, but I must admit I was wrong. Tonight I have witnessed the Empress of Butchery. Long live the Queen, Miss Sophie Tucker". [source]

The next day, Tucker received a telegram from Burton apologising for his behaviour. 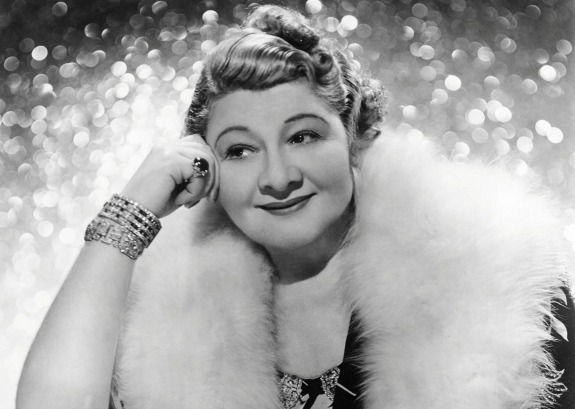 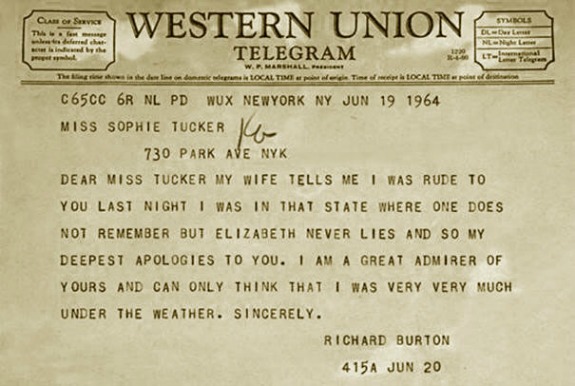 My wife tells me I was rude to you last night. I was in that state where one does not remember but Elizabeth never lies and so my deepest apologies to you. I am a great admirer of yours and can only think that I was very very much under the weather. Sincerely. 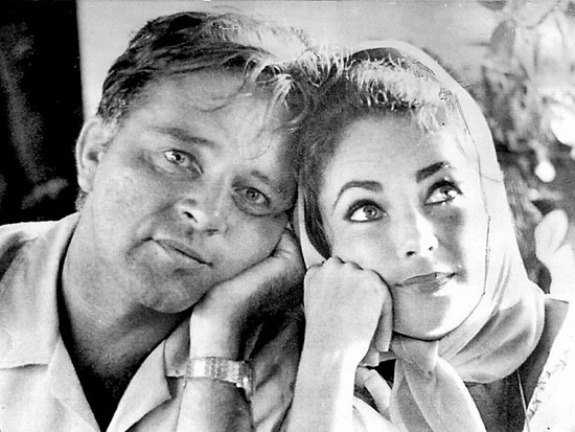 Tallulah Bankhead was perhaps more famous for her eccentric personality and stormy personal life than her acting career. She had lots of affairs with both men and women, one of the women being jazz singer Billie Holiday. Tallulah and Billie probably first met in Harlem in the early 1930s but didn't get together until the late 1940s when they were both performing on Broadway (Billie at the Strand Theatre while Tallulah was doing a play at a theatre nearby). The two women became close and had an intense relationship for a few years. 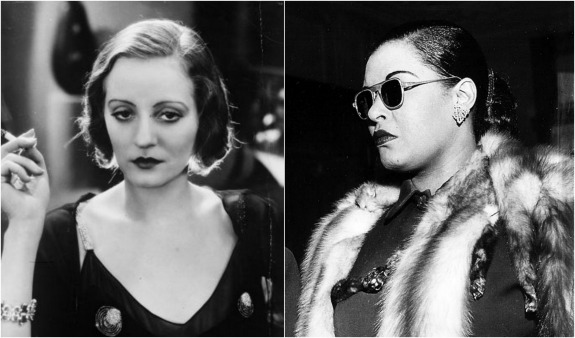 In early 1949, Billie was charged with possession of opium. Tallulah tried to help her and got in touch with FBI director J. Edgar Hoover, who was a close friend of her father's (wealthy politician Will Bankhead). In a telephone call with Hoover, Tallulah begged him to exonerate Billie of the charges, but Hoover told her that the case had been handed over to the state authorities, that it was out of his hands. Following their telephone conversation, Tallulah contacted Hoover again on 9 February 1949. Pleading Billie's case once more, this time she wrote him a letter. 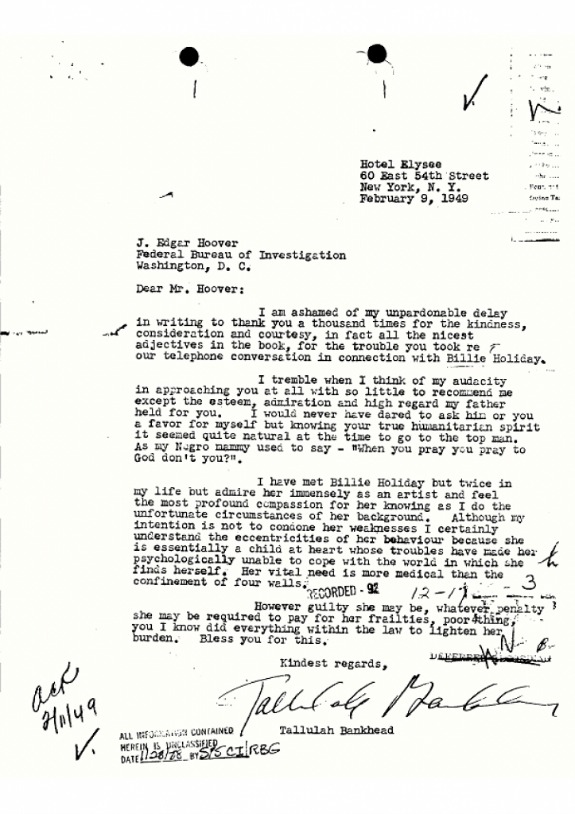 I am ashamed of my unpardonable delay in writing to thank you a thousand times for the kindness, consideration and courtesy, in fact all the nicest adjectives in the book, for the trouble you took re our telephone conversation in connection with Billie Holiday. 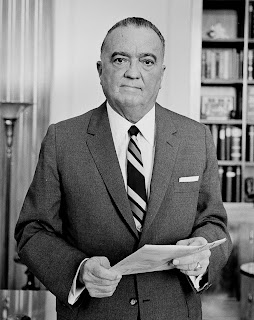 I tremble when I think of my audacity in approaching you at all with so little to recommend me, except the esteem, admiration and high regard my father held for you. I would never have dared to ask him or you a favor for myself but knowing your true humanitarian spirit it seemed quite natural at the time to go to the top man. As my Negro mammy used to say - "When you pray you pray to God don't you?".

I have met Billie Holiday but twice in my life but admire her immensely as an artist and feel the most profound compassion for her knowing as I do the unfortunate circumstances of her background. Although my intention is not to condone her weaknesses I certainly understand the eccentricities of her behaviour because she is essentially a child at heart whose troubles has made her psychologically unable to cope with the world in which she finds herself. Her vital need is more medical than the confinement of four walls.

However guilty she may be, whatever penalty she may be required to pay for her frailties, poor thing, you I know did everything within the law to lighten her burden. Bless you for this, 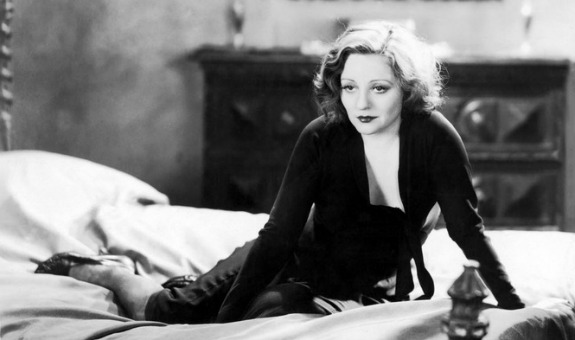 Sometime between 1949 and 1952, Tallulah began to distance herself from Billie. Afraid that her career would be destroyed if people knew about their relationship, Tallulah didn't mention Billie once in her 1952 autobiography. A few years later when Billie was working on her own autobiography Lady Sings the Blues, a copy of the manuscript was sent to Tallulah who threatened to file a lawsuit if she wasn't kept out of the book. On 12 January 1955, Billie responded with an embittered letter (shown below in transcript). Billie never received a reply to her letter, and in the end Tallulah was only mentioned as "just a friend who sometimes came around to the house to eat spaghetti."

I thought I was a friend of yours. That's why there's nothing in my book that was unfriendly to you, unkind or libelous. Because I didn't want to drag you, I tried six times last month to talk to you on the damn phone, and tell you about the book just as a matter of courtesy. That bitch you have who impersonates you kept telling me to call back and when I did, it was the same deal until I gave up. But while I was working out of town, you didn't mind talking to Doubleday and suggesting behind my damned back that I had flipped and/or made up those little mentions of you in my book. Baby, Cliff Allen and Billy Heywood are still around. My maid who was with me at the Strand isn't dead either. There are plenty of others around who remember how you carried on so you almost got me fired out of the place.  And if you want to get shitty, we can make it a big shitty party. We can all get funky together!

I don't know whether you've got one of those damn lawyers telling you what to do or not. But I'm writing this to give you a chance to answer back quick and apologize to me and to Doubleday. Read my book over again. I understand they sent you a duplicate manuscript. There's nothing in it to hurt you. If you think so, let's talk about it like I wanted to last month. It's going to press right now so there is no time for monkeying around. Straighten up and fly right, Banky. Nobody's trying to drag you.

Nothing but praise for it as a hilariously funny movie

Billy Wilder's Some Like it Hot (1959) was released at a time when the Production Code was slowly dying. In 1954, PCA's director Joseph Breen (a strict censor for two decades) had been replaced by his deputy director Geoffrey Shurlock who was far less strict than Breen, giving filmmakers room to be more creative. The Catholic Legion of Decency, however, strongly objected to Some Like it Hot, because of its subject matter of transvestism, hints at homosexuality and lesbianism, and double-entendre dialogue.

On 5 March 1959, Reverend Thomas F. Little of the Legion of Decency, wrote a letter to Geoffrey Shurlock, listing his objections to Some Like it Hot, which he felt "bordered on condemnation". Shurlock replied a few days later, apparently not agreeing with the Reverend, while referring to trade paper reviews which called the film "hilariously funny". Incidentally, both letters contradict some of the things I've read on the internet regarding Some Like it Hot. According to several sources, the Legion of Decency condemned the film giving it a C-rating, but Father Little's letter clearly shows that his rating was B (morally objectionable in part). Also, many sources say that Some Like it Hot was released without the approval of the PCA. However, Shurlock's letter (written before the film's actual release date) gives the impression that he didn't object to the film at all.

The letters will be shown in transcript only; click here for the original images.
Source: oscars.org

For your information and, I am sure, interested reaction the Legion on March 12 rated the United Artists film SOME LIKE IT HOT, starring Marilyn Monroe, as B (Morally Objectionable in Part for All), with the following objection noted:

¨This film, though it purports to be a comedy, contains screen material elements that are judged to be seriously offensive to Christian and traditional standards of morality and decency. Furthermore, its treatment dwells almost without relief on gross suggestiveness in costuming, dialogue and  situations. ¨

Since the initiation of the triple A method of classifying films in December 1957, this film has given the Legion the greatest cause for concern in its evaluation of Code Seal pictures. As you can well imagine, it bordered on condemnation. The subject matter of ¨transvestism¨ naturally leads to complications; in this film there seemed to us to be clear inferences of homosexuality and lesbianism. The dialogue was not only ¨double entendre¨ but outright smut. The offense in costuming was obvious.

In the present atmosphere of our society, which seems to be calling for censorship and controls, this picture will only add fuel to the fire.

I thought that you would be sincerely interested in our observations. Perhaps they might act as a stop gap in future decisions with which you are faced.

With best personal wishes to yourself and the staff, I remain

In reply to yours of March 5th, we have been scanning very carefully the trade paper reviews of SOME LIKE IT HOT. To date we have received eight such reports, including two from Martin Quigley´s publications.

Not a single reviewer has been in the slightest way critical of this film, or questioned either its morality or its taste. So far there is simply no adverse reaction at all; nothing but praise for it as a hilariously funny movie.

I am not suggesting, of course, that there are not dangers connected with a story of this type. But girls dressed as men, and occasionally men dressed as women for proper plot purposes, has been standard theatrical fare as far back as AS YOU LIKE IT and TWELFTH NIGHT, and perhaps further. The classic example of a man masquerading in woman´s clothes without offense is CHARLEY´S AUNT, which has been a hilarious hit for three-quarters of a century.

It seems to boil down to the fact that if this material is handled properly it can and will be accepted. Of course, if it is handled improperly it could be enormously objectionable. But as indicated, eight reviewers to date have seen this film and their consensus without reservation is that it has been treated acceptably.

We can only trust that the general public will be of the same mind, and that the alarm the Legion very understandably expressed may prove in the long run to be no worry at all. At any rate, that is the hope we are nourishing.

We are of course not defending the two exaggerated costumes worn by the leading lady; but we gathered these were not your major concern.

With kindest regards from the staff,