It is a completely enjoyable film, full of fun and YOU

While Billy Wilder's Some Like It Hot (1959) is now regarded as one of the greatest comedies ever made, at the time its leading lady Marilyn Monroe was less enthusiastic about the film. Marilyn had shared her disappointment over the finished film with her close friend, poet/ playwright Norman Rosten, and in response Rosten wrote her a brief letter in an attempt to cheer her up (seen below). Despite Marilyn's own feelings regarding Some Like It Hot and her role in it, the film became a huge critical and commercial success, with Marilyn's comedic performance now considered one of the best of her career (for which she even won a Golden Globe).

Incidentally, Some Like It Hot is a recommended comfort film to watch or re-watch during these difficult times. Stay safe! 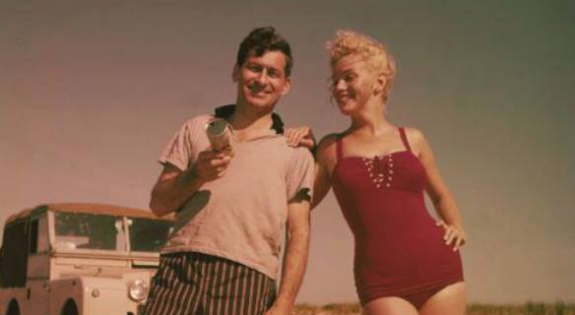 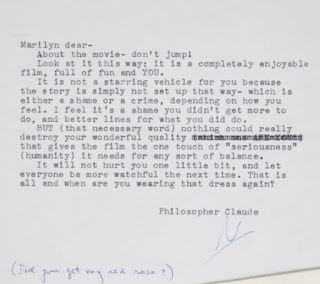 About the movie - don't jump!

Look at it this way: it is a completely enjoyable film, full of fun and YOU.

It is not a starring vehicle for you because the story is simply not set up that way - which is either a shame or a crime, depending on how you feel. I feel it's a shame you didn't get more to do, and better lines for what you did do.

BUT (that necessary word) nothing could really destroy your wonderful quality that gives the film the one touch of "seriousness" (humanity) it needs for any sort of balance.

It will not hurt you one little bit, and let everyone be more watchful the next time. That is all and when are you wearing that dress again?

handwritten (Did you get my red rose?) 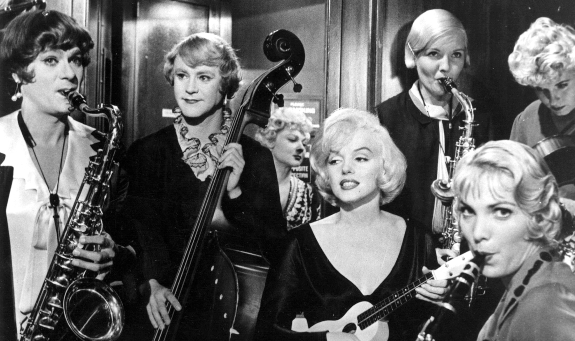 Posted by Clarissa Saunders No comments:
Tags: Marilyn Monroe, Some Like it Hot

You are a very good friend

Just a sweet little note from a friend to a friend. Ava Gardner and George Cukor were good friends -- Cukor seemed to have been friends with a lot of people in Hollywood -- and this note was written by Ava to Cukor in September 1973. The two worked together only once, on Bhowani Junction (1956) in which Ava co-starred with Stewart Granger. For years after that Cukor tried to find another project for them to do together, but no suitable project was ever found. Ava once said that it was Cukor who gave her the nicest compliment anyone had ever given her: "'Ava', he told an interviewer, 'is a gentleman'. A gentleman. I like that." 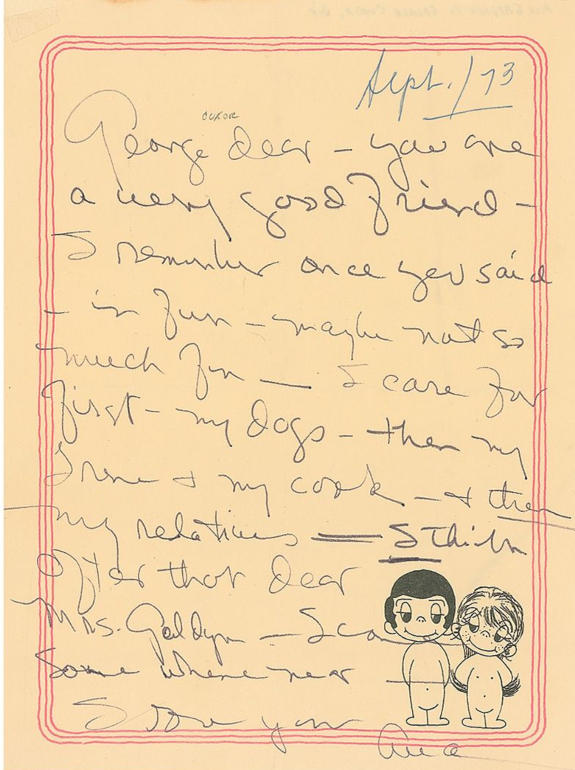 George dear - you are a very good friend - I remember once you said - in fun - maybe not so much fun — I care for first – my dogs – then my Irene & my cook – & then my relatives — I think after that dear Mrs. Goldyn — I came somewhere near —

I love you
Ava 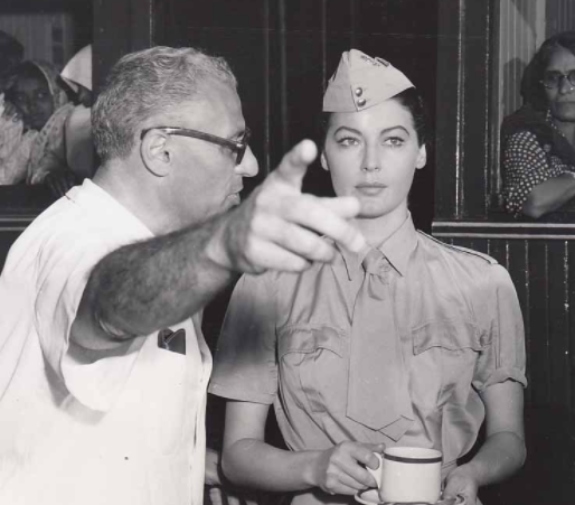 David O. Selznick made practically every decision for Jennifer Jones when it came to her film career. Having discovered Jones in 1941 -- she was still Phyllis Walker then, married to actor Robert Walker --  Selznick gave her a new name, a seven-year contract and then groomed her to stardom (and in 1949 he also married her). Selznick was responsible for getting Jones numerous parts, including her Oscar-winning role in Song of Bernadette (1943) as well as roles in his own productions such as Since You Went Away (1944) and Duel in the Sun (1946).

But as powerful as Selznick was, he didn't always get his way. In 1952, he wanted Jones to get the female lead in My Cousin Rachel, a film based upon the novel by Daphne du Maurier. However, 20th Century-Fox studio head Darryl Zanuck, who had purchased the rights to Du Maurier's novel, didn't consider Jones right for the role and director George Cukor and producer/screenwriter Nunnally Johnson agreed with him.

In a letter to David Selznick dated 31 March 1952, Darryl Zanuck explains why Jones would be wrong for the part of Rachel, his main reason being that she was too young and not of British descent or foreign-born. Zanuck wanted to make sure that Selznick knew that the decision not to cast Jones was nothing personal and that it had nothing to do with Jones' acting abilities ("I am not going into a lot of nonsense about how much I admire and appreciate Jennifer's talent. It would be stupid of me to be unaware of it"). In the end, it was Olivia de Havilland who got the role of Rachel. She was three years older than Jones and of British descent. Other actresses considered for the role were Vivien Leigh and Greta Garbo. (Incidentally, I think De Havilland was perfectly cast, giving one of the best performances of her career.) 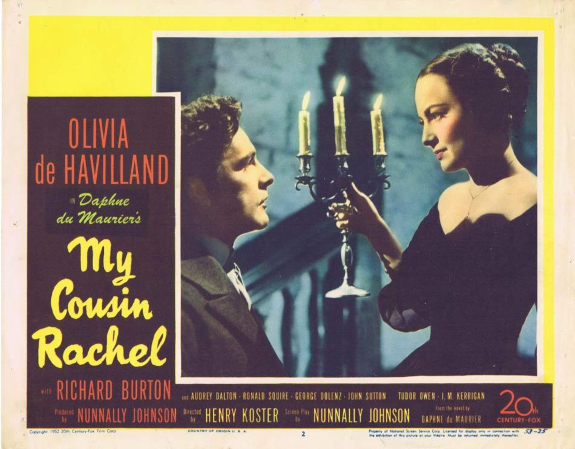 I feel compelled to write you about the role in My Cousin Rachel. George Cukor* and others have told me of their discussions with you, and our good friend Charles Kenneth Feldman** has been bombarding me daily with everything from bouquets to bombshells. Somehow he seems to feel that you hold him personally responsible for our failure to see "the light" in connection with the role of Rachel.

I am not going into a lot of nonsense about how much I admire and appreciate Jennifer's talent. It would be stupid of me to be unaware of it. I just want to tell you how we feel about the role of Rachel.

When I say we I mean Nunnally Johnson, George Cukor and me. From the very beginning when we purchased the story we thought of it in terms of an English actress or a foreign-born actress. We felt that this was absolutely essential. The perfect combination would be a woman who spoke with an English accent and was able at the same time to think "in Italian". Furthermore Rachel cannot be younger than forty years of age*** unless we destroy the whole premise of this odd love story. It is the love story of a twenty-five year old boy with a woman fifteen years older. It seems to us that if we eliminate this factor or compromise with it we will destroy the most unique premise in the book. This is exactly what makes it, we hope, "different".

This was my thought when I purchased the book. Independently it was Nunnally Johnson's thought. And when George Cukor came on the assignment it was also his viewpoint. Now I grant you that we may all be entirely wrong. Time will tell. When I suggested Jeanne Crain to play the Negro girl in Pinky [Elia] Kazan thought I was nuts. When Kazan suggested Marlon Brando to play Zapata I thought he was nuts. It turned out in both cases we were both nuts in the right way.

The reason I wanted to write you directly is so that you would get the story straight and not feel for a moment that any other motives or considerations were involved.

Notes
*  Unhappy with the script, George Cukor withdrew from the project and was replaced by Henry Koster.
** Charles Feldman was a film producer and talent agent.
*** In Daphne du Maurier's novel Rachel is 35 years old and not 40, as Zanuck states, and Philip is 24 (at the start of the book), making the age difference between them 11 years. At the time Olivia de Havilland was 36 and Richard Burton 27.
Posted by Clarissa Saunders No comments:
Tags: Darryl F. Zanuck, David O. Selznick, Jennifer Jones, My Cousin Rachel, Olivia de Havilland
Newer Posts Older Posts Home
Subscribe to: Posts (Atom)