Our system must be an ideal one

During the 1920s, Darryl F. Zanuck worked as a screenwriter for Warner Brothers before becoming head of production in 1931. Around the same time Edward G. Robinson, one of Warners' contract players, was having his big breakthrough with Little Caesar (1931) and eventually became one of the studio's biggest stars. Growing increasingly unhappy with the scripts that were submitted to him, Robinson wrote to Zanuck in the fall of 1932, uttering his grievances. Unfortunately I don't have Robinson's letter to show you, but Zanuck's reply —in which he told Robinson that he had nothing to complain about and to just have faith in "the system"— can be read below. 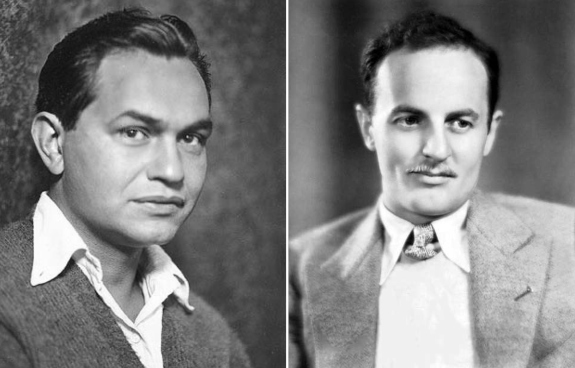 Mr. Edward G. Robinson
Essex House
New York, N.Y.
October 26, 1932
Dear Eddie:
To start with the last paragraph of your letter first and then go backward, you accuse me of not submitting to you some of the pictures that we have made recently with other people which have turned out to be outstanding hits, and you state that you are certain that anyone of them would have been acceptable to you.
In the first place, you have no complaint as you have received absolutely nothing but the best in stories and, in the second place, you have repeatedly rejected stories that later turned out to be successful pictures...
As I see it, Eddie, the whole fault lies in the fact that you want to be a writer. By this I mean that you want to put your views into whatever subject we purchase rather than to accept the views of the men I engage here who are specialists at a high salary in this specific work.
When I submit you a Grand Slam [1933], you say we have taken the wrong slant on the story —the idea is good but it should be something else. When I submit you a Lawyer Man [1933] or an Employees' Entrance [1933], you say the same thing.
By the way, Lawyer Man is the best picture [William] Powell has ever made and it would have been a perfect vehicle for you. It will be previewed in a week or so and I will send you the preview notices.
I have always wanted and asked for your suggestions and the suggestions of every star, as to story, etc., and those suggestions you made as to dialogue, etc., have, to my knowledge, for the most part been very effective and certainly appreciated by me.
The point I am trying to make is that when we submit a Lawyer Man or whatever it happens to be, you must have some faith in us. After all, our record of successes and box-office hits places us as the A-Company in the industry today, recognized thus everywhere. Our system, therefore, must be an ideal one. You can't make a lot of hits with a lot of different directors and a lot of different stars and some of them with no stars at all unless "the system" is a perfect one as, in our studio, it isn't just a case of one director or one star continually making a hit and the other ones flopping. This should be the greatest assurance in the world to you that our judgment is more or less correct, especially on the selection of stories and if I were in your shoes, I would be greatly guided by this "system."

After all, our sole interest is getting great pictures out of anything we select and we will accept anybody's ideas or suggestions, but the treatment of the subject in script form should be left largely to the judgment and intelligence of our "system", at least until the day comes —if it ever does— when our flops are more numerous than our hits ...
Sincerely,
Darryl Zanuck

The Short-Lived History Of Oscar Write-Ins

For two years in Oscar history —in 1935 and 1936— the Academy of Motion Picture Arts and Sciences allowed its members to vote for anyone they chose, even when that person was not officially nominated. Reason for the Academy to permit these write-in votes was the public outrage that occurred over the snub of Bette Davis' performance in RKO's Of Human Bondage (1934). Bette's powerful and daring portrayal of the coarse waitress Mildred was unanimously praised by critics, audiences and Hollywood celebs alike, with Life magazine even calling it "probably the best performance ever recorded on the screen by a U.S. actress". The fact that Bette wasn't among the Best Actress nominees led to a huge uproar and a write-in campaign followed to have her nominated anyway. (Even Norma Shearer who herself was nominated for The Barretts of Wimpole Street supported the campaign.) 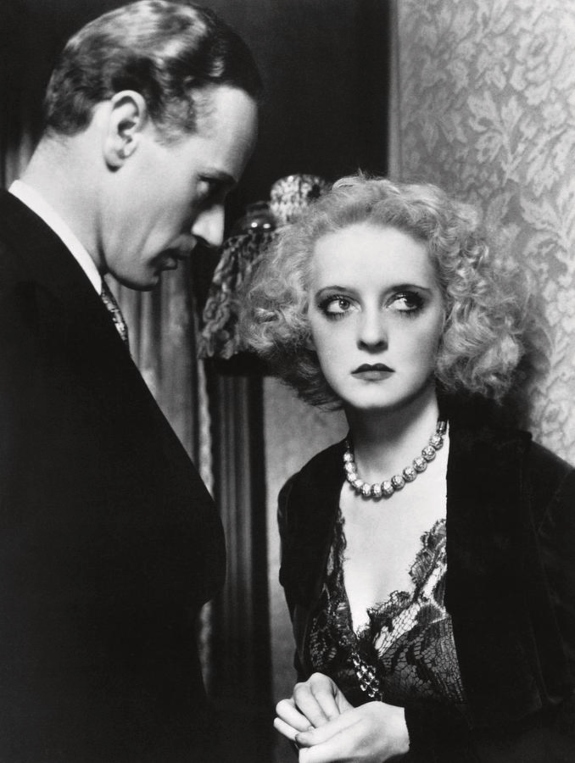 Among the general public there were many people shocked by the omission of Bette from the list of Oscar nominees. A man named James Fitzgerald sent this letter to the movie fan magazine Movie Classic, showing his indignation and calling on others to also make themselves heard.
In order to put an end to all the criticism, several days after the announcement of the nominations the Academy decided to change the rules and issued a statement: "Despite the fact that the criticism fails to take into consideration that the nominations have been made by the unrestricted votes of each branch, the awards committee has decided upon a change in the rules to permit unrestricted selection of any voter, who may write on the ballot his personal choice for the winner." Bette Davis became the only write-in nominee that year but eventually lost to Claudette Colbert for her performance in It Happened One Night. When Bette did win the next year for her role in Dangerous, she called the Oscar her consolation prize for losing out with Of Human Bondage. 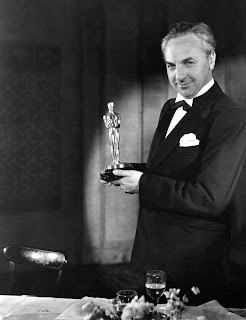 The next year, write-in votes were again allowed and there was one studio that decided to go all in. Studio boss Jack Warner encouraged all Academy members among his employees to submit write-ins for Warner Bros. films. This resulted in unofficial nominations in seven different categories, including Michael Curtiz for Best Director in Captain Blood and Paul Muni for Best Actor in Black Fury (Warners being the only studio that year with write-in nominees). Warners' active campaigning eventually paid off when the unofficially nominated Hal Mohr (see photo) took home the Oscar for Best Cinematography in A Midsummer Night's Dream. Technical issues of write-in voting aside, the Academy realised that this kind of voting was not the way to go, seeing how easy it was for studios to manipulate the system and win Oscars. (It was later revealed that write-in nominees Muni and Curtiz had come close to beating the eventual winners Victor McLaglen and John Ford, who both won for The Informer.)
Write-in voting was thus abandoned a year later and Hal Mohr remains the only write-in winner in Oscar history.
Posted by Clarissa Saunders No comments:
Tags: Bette Davis, Oscars, Warner Brothers

Please keep me posted on all the news

After their church wedding on 19 April 1956, Grace Kelly and Prince Rainier immediately left on their honeymoon, a seven-week Mediterranean cruise on Rainier's yacht Deo Juvante II. The newlyweds went ashore in Spain, among others visiting the island of Mallorca (where they attended a bullfight) and the cities of Madrid and Valencia. A few days after returning to Monaco, Grace wrote a letter to her friend and MGM publicist Morgan Hudgins, in which she commented on her honeymoon in Spain and meeting some of her Hollywood friends there (Cary Grant and his wife Betsy Drake as well as Ava Gardner and Ava's then-husband Frank Sinatra). Her departure from Hollywood still very fresh, Grace was of course quite anxious to hear all the news and urged Hudgins to keep her in the loop, especially regarding the critical reception of her two last films The Swan (1956) and High Society (1956).

Grace's letter to Morgan Hudgins, in which she also worries about the press reactions to the wedding, is seen below. Incidentally, I don't know who "Nadia" is but I assume she was an assistant to Grace. 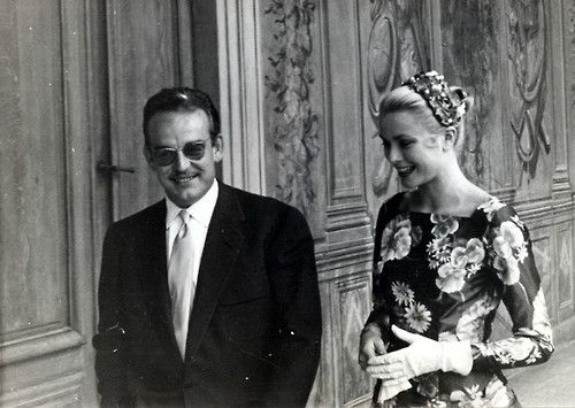 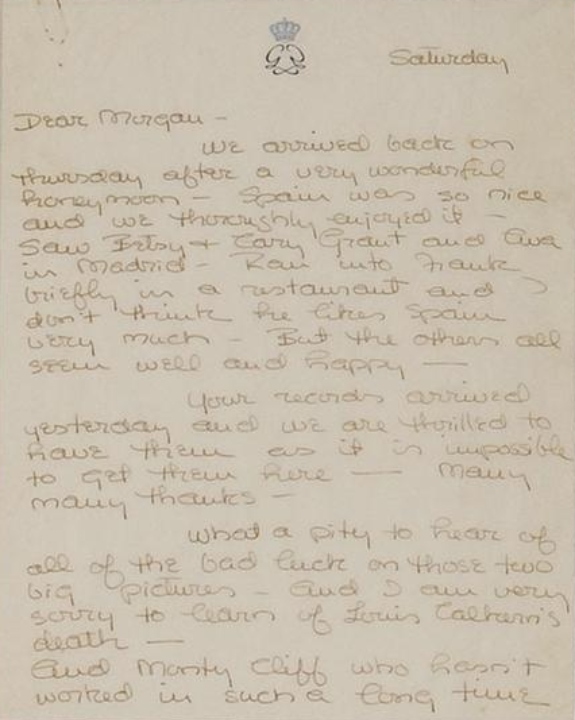 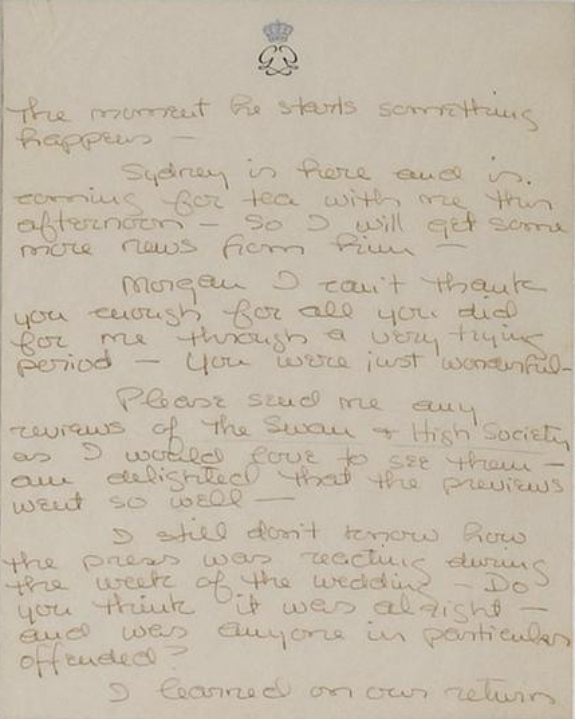 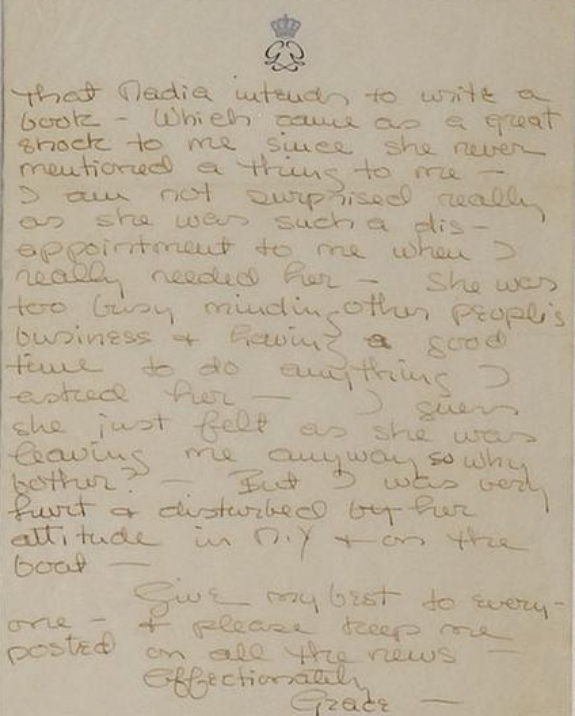 Source: icollector.com
Transcript:
Saturday
Dear Morgan
We arrived back on Thursday after a very wonderful honeymoon – Spain was so nice and we thoroughly enjoyed it – Saw Betsy + Cary Grant and Ava in Madrid – Ran into Frank briefly in a restaurant and I don't think he likes Spain very much – But the others all seem well and happy –
Your records arrived yesterday and we are thrilled to have them as it is impossible to get them here – many many thanks –
What a pity to hear of all the bad luck on those two big pictures – and I am very sorry to learn of Louis Calhern’s death*–
And Monty Cliff [sic] who hasn’t worked in such a long time the moment he starts something happens*–
Sydney is here and is coming for tea with me this afternoon –  so I will get some more news from him –
Morgan I can't thank you enough for all you did for me through a very trying period – You were just wonderful –
Please send me any reviews of The Swan +  High Society as I would love to see them – am delighted that the previews went so well –
I still don’t know how the press was reacting during the week of the wedding – Do you think it was alright – and was anyone in particular offended?
I learned on our return that Nadia intends to write a book – Which came as a great shock to me since she never mentioned a thing to me – I am not surprised really as she was such a disappointment to me when I really needed her – She was too busy minding other people’s business + having a good time to do anything I asked her – I guess she just felt as she was leaving me anyway so why bother? – But I was very hurt + disturbed by her attitude in N.Y. + on the boat –
Give my best to everyone + please keep me posted on all the news –
Affectionately
Grace –
*Note
On 12 May 1956, Louis Calhern (Grace's High Society co-star) suddenly died of a heart attack at age 61. On the same day, Montgomery Clift had a near-fatal accident after his car crashed into a telephone pole. At the time Clift was filming  Raintree County (1957), his first film after From Here to Eternity (1953).