When gossip columnist Hedda Hopper saw James Dean for the first time, she was appalled by his unkempt appearance and his bad manners. Such was her disgust with Dean that she wrote in her column the next day: "They've brought out from New York another dirty-shirttail actor. If this is the kind of talent they're importing, they can send it right back so far as I'm concerned." (Quote from Hopper's 1962 autobiography The Whole Truth and Nothing But.)

A while later, Hopper received an invitation to attend the preview of East of Eden (1955). Given her bad first impression of Dean, Hopper refused to go. The day after the preview, however, Clifton Webb (who was quite excited about Dean's performance and whose judgment Hopper respected) told her to go see the film, so Hopper arranged a private screening and was immediately enthralled by Dean. She invited Dean to her house for an interview and he soon had her eating out of the palm of his hand. From then on, Hopper was Dean's biggest fan. When he suddenly died in September 1955 after crashing his car, she lobbied hard for a James Dean memorial ánd a posthumous Academy Award. Despite all her efforts, Hopper achieved neither.

Shown below are Hopper's radio statement about James Dean from 5 October 1955 (five days after his death) and a letter written by Hopper to Jimmy Madden (a fan) on 3 January 1956. Madden had contributed $1 for Dean's memorial, but since there would be no memorial (due to the lack of interest in Hollywood) Hopper saw fit to return Madden's money. Also, Hopper writes that she was working on a special Oscar for Dean but, as mentioned, the Oscar never happened. (Incidentally, it wasn't until much later (in 1977) that Dean did get a memorial; read more here.) 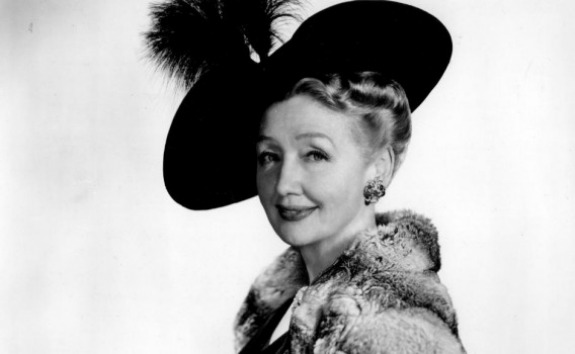 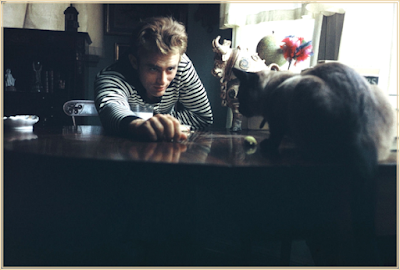 "I'm still reeling from the sudden death of Jimmy Dean, one of the greatest acting talents I've ever known. He was a tragic figure. So few understood him. He was reaching out for love and understanding, but got so little. His greatest ambition was to play "Hamlet" on Broadway. Said he, "It should be done only by a young man." The thing he loved most was the thing that killed him-- his racing car. He carried with him in his death the St. Christopher medal Pier Angeli gave him while he was making "East of Eden." He was like quicksilver. He had a sure instinct for drama. He was like the parched earth longing for the rain. Only a few days ago a friend of mine met him in a pet hospital. He had brought a kitten for an innoculation, and the loving care he was giving it was beautiful to look upon. It will be a long time before we see his like again. I loved the boy and always will." 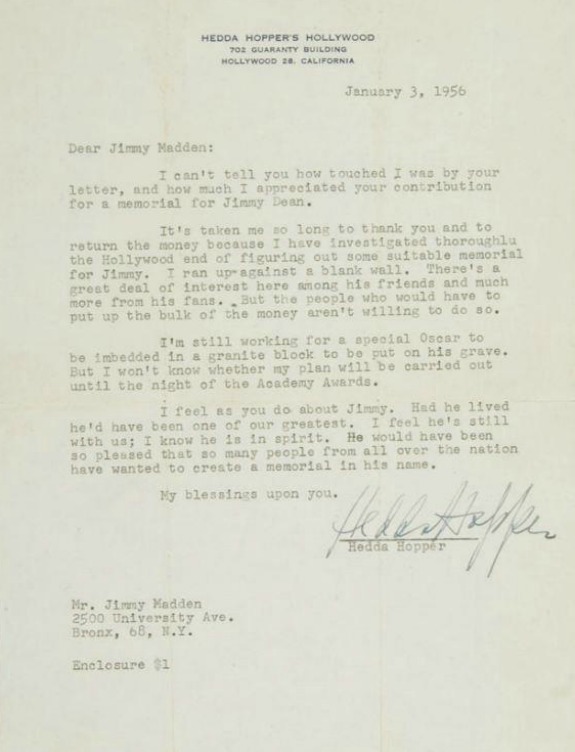 I can't tell you how touched I was by your letter, and how much I appreciated your contribution for a memorial for Jimmy Dean.

It's taken me so long to thank you and to return the money because I have investigated thoroughlu [sic] the Hollywood end of figuring out some suitable memorial for Jimmy. I ran up against a blank wall. There's a great deal of interest here among his friends and much more from his fans. But the people who would have to put up the bulk of the money aren't willing to do so.

I'm still working for a special Oscar to be imbedded in a granite block to be put on his grave. But I won't know whether my plan will be carried out until the night of the Academy Awards.

I feel as you do about Jimmy. Had he lived he'd have been one of our greatest. I feel he's still with us; I know he is in spirit. He would have been so pleased that so many people from all over the nation have wanted to create a memorial in his name.

My blessings upon you.

Here is a sweet little note from Norma Shearer to Brian Aherne, written in 1935. Shearer wrote to Aherne after doing a screen test together for MGM's film adaptation of Romeo and Juliet. Aherne was one of the actors considered for the role of Romeo, but he later decided not to play it, much to Shearer's disappointment. The reason for rejecting the part was that Aherne thought himself too old for it. (Fredric March, MGM's first choice, had rejected the role for the same reason.) In the end, the Romeo part went to Leslie Howard who, at the time in his forties, was even older than Aherne (or March). Incidentally, Shearer herself was 33, which made her also a very old Juliet. 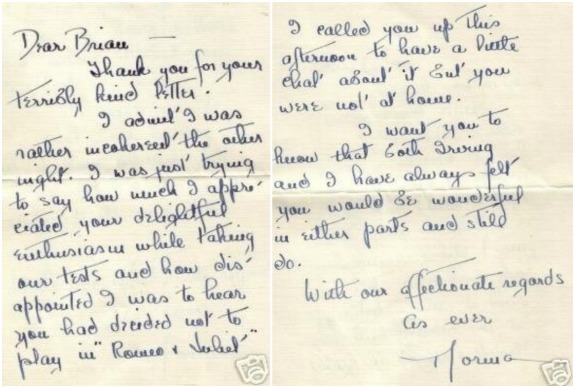 Thank you for your terribly kind letter.
I admit I was rather incoherent the other night. I was just trying to say how much I appreciated your delightful enthusiasm while taking our tests and how disappointed I was to hear you had decided not to play in "Romeo + Juliet".
I called you up this afternoon to have a little chat about it but you were not at home.
I want you to know that both Irving and I have always felt you would be wonderful in either parts and still do.

With our affectionate regards 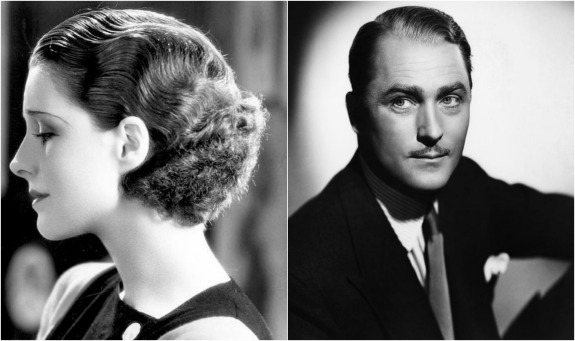 Notes
-Judging by Shearer's letter, Aherne was also considered for another part in Romeo and Juliet, which was most likely the role of Mercutio, a role Aherne had played on Broadway in 1934.

-"Irving" was Shearer's husband Irving Thalberg, head of production at MGM. Thalberg had wanted to make Romeo and Juliet for a long time and in June 1935 announced his plans to do so. Studio head Louis B. Mayer, however, was far from enthusiastic about the project, since he felt that a Shakespeare adaptation would not be accessible enough for the general public. In the end, Thalberg managed to convince Mayer and hired George Cukor to direct. Romeo and Juliet was released in 1936, having cost MGM $2 million (Thalberg's original budget was $800,000). Due to its high production costs, the film eventually lost a lot of money at the box-office. 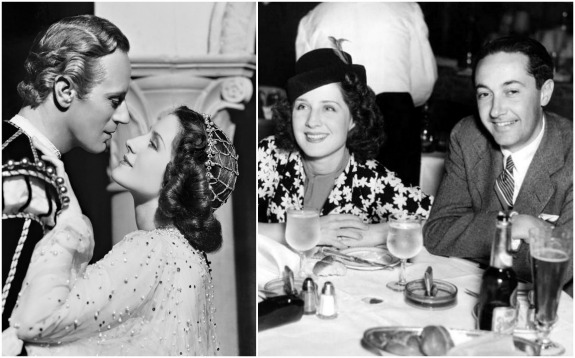 Mae West and her fight for better prison life 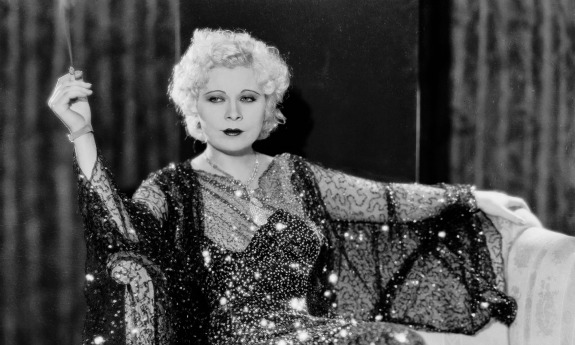 In April 1927, Mae West was sentenced to ten days in prison for having corrupted 'the morals of youth' with the 1926 Broadway play Sex, which she had written, produced, directed and starred in. West was released after eight days for good behaviour, but had seen enough to understand what life in prison was like. Admittedly, West's prison stay wasn't your standard prison stay --she got to dine with the warden and regarded the whole thing as a big publicity stunt-- but she saw what other inmates went through and was determined from then on to do whatever she could to improve prison life. Following her release from Welfare Island prison, West wrote an article for Liberty Magazine about her imprisonment, and her $1,000 earnings she donated to the prison so they could build a better library. Also, having spent a lot of time talking to female inmates, she wanted to help them find jobs once they were released from jail. 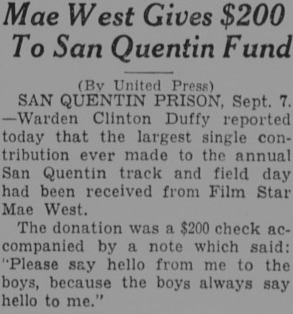 Clinton Duffy was the warden at San Quentin State Prison between 1940 and 1952. An opponent of the death penalty, Duffy was a prison reformer and someone whom Mae West greatly admired. West wrote to several people praising Duffy's good work and asking them to support him. To the governor of California Culbert Olson, she reportedly wrote: "I hope your excellency will feel as I do and let Warden Duffy continue making bad men good, while I continue making good men bad— I mean in the movies".

West also wrote to fellow actor Gary Cooper (her letter to him is shown below), asking him to make a financial contribution to one of Warden Duffy's projects. West felt that they owed something to the "bad boys" for being the inspiration for so much of Hollywood's screen material. Whether Cooper eventually made a donation I don't know, but West herself most likely did and also contributed to one of Warden Duffy's other projects (see the above newspaper clipping, taken from the San Bernardino Daily Sun of 7 Sept. 1941). 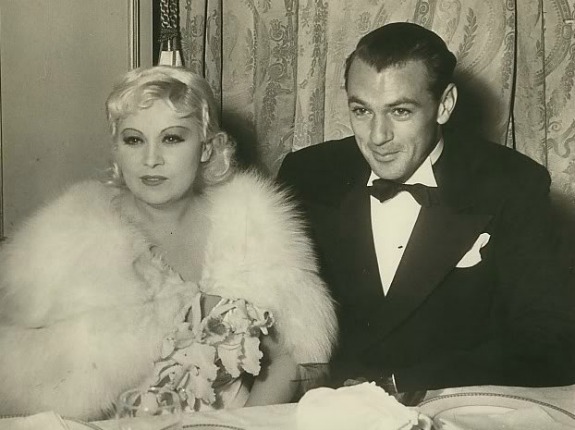 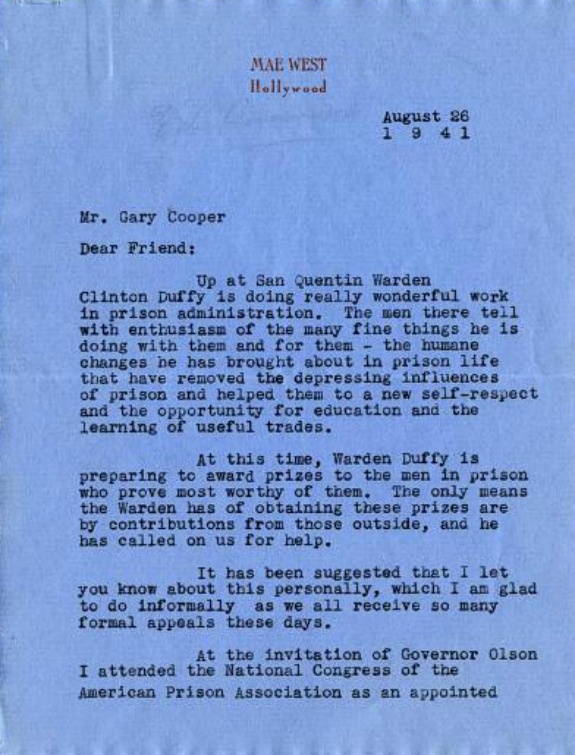 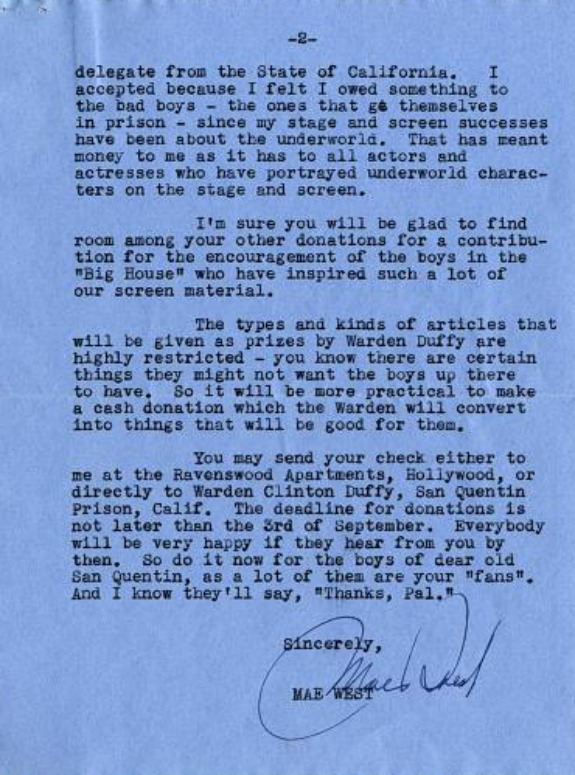 Up at San Quentin Warden Clinton Duffy is doing really wonderful work in prison administration. The men there tell with enthusiasm of the many fine things he is doing with them and for them- the humane changes he has brought about in prison life that have removed the depressing influences of prison and helped them to a new self-respect and the opportunity for education and the learning of useful trades.

At this time, Warden Duffy is preparing to award prizes to the men in prison who prove most worthy of them. The only means the Warden has of obtaining these prizes are by contributions from those outside, and he has called on us for help.

It has been suggested that I let you know about this personally, which I am glad to do informally as we all receive so many formal appeals these days.

At the invitation of Governor Olson I attended the National Congress of the American Prison Association as an appointed delegate from the State of California. I accepted because I felt I owed something to the bad boys- the ones that ge [sic] themselves in prison- since my stage and screen successes have been about the underworld. That has meant money to me as it has to all actors and actresses who have portrayed underworld characters on the stage and screen.

I'm sure you will be glad to find room among your other donations for a contribution for the encouragement of the boys in the "Big House", who have inspired such a lot of our screen material.

The types and kinds of articles that will be given as prizes by Warden Duffy are highly restricted- you know there are certain things they might not want the boys up there to have. So it will be more practical to make a cash donation which the Warden will convert into things that will be good for them.

You may send your check either to me at the Ravenswood Apartments, Hollywood, or directly to Warden Clinton Duffy, San Quentin Prison,Calif. The deadline for donations is not later than the 3rd of September. Everybody will be very happy if they hear from you by then. So do it now for the boys of dear old San Quentin, as a lot of them are your "fans". And I know they'll say, "Thanks, Pal."