An actress is an actress first and a trained seal secondly 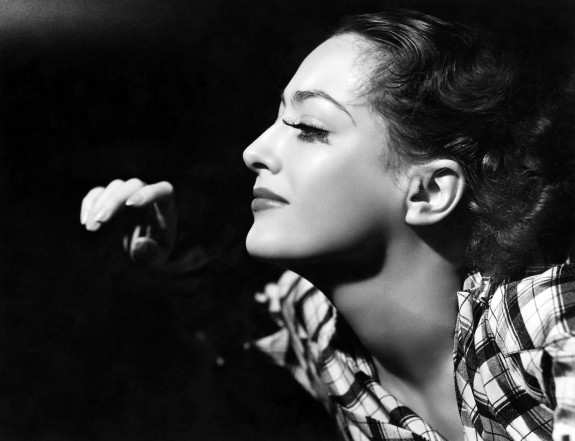 In the October 1940 issue of the fan magazine "Hollywood", columnist Ed Sullivan had a lot of negative things to say about Joan Crawford, then 36 years old.

Here are some excerpts from Sullivan's column:


"Goodness knows that I don't often rap people, or performers, but it's about time to crack down on wide-eyed Joan Crawford... For some years, I've tried sincerely to like her, but she certainly strains friendship to a point where something has to give, and it GAVE... This squawk then is justified because there is no performer who so often exclaims that the press of the country has been unfair to her and non-cooperative.

I don't know, really, anyone who has gone so far in this business with so little talent as La Crawford.

Broadway, which remembers her as an N.T.G. girl and a Shubert chorus girl, resents that attitude with good reason... If Joan wonders why her latest flicker, "Susan and God", was such a terrific box-office flop, it is not alone that the part was unsuited to her talents; it was also because the contract with her public has been broken.

A better rooting section is that which acclaims George Raft... Raft has the entire country rooting for him, because the public has more than a sneaking idea that here is a nice guy... Like Crawford, Raft went from the sidewalks of New York to movie fame, but unlike her, he never forgot his old friends.

I confess that I've lost patience with Joan Crawford... No longer will this pillar rush to her defense when other movie stars put the blast on her for her insincerity, or for her affectations."

In the January 1941 issue, "Hollywood"-magazine gave Joan plenty of space to defend herself. 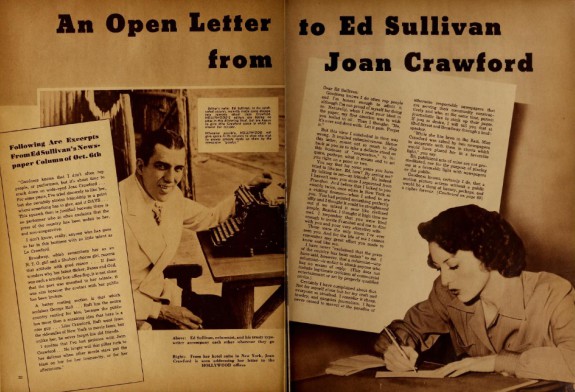 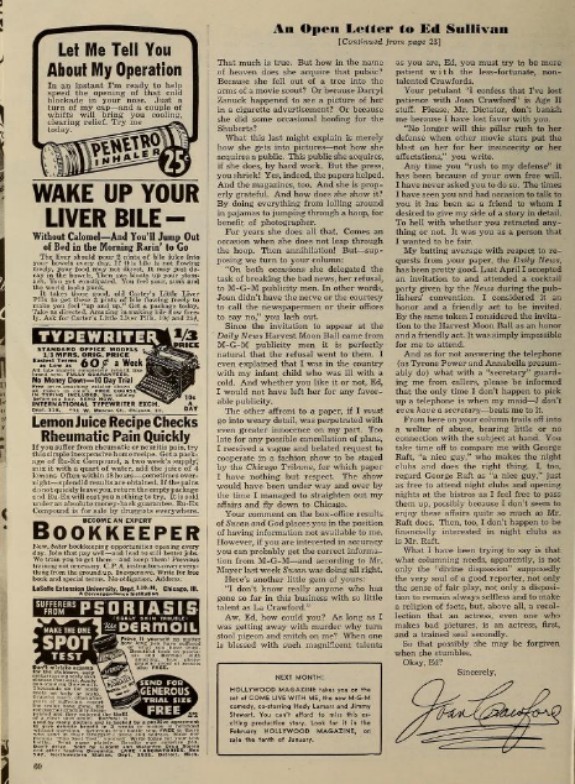 Goodness knows I do often rap people and I'm honest enough to admit it, although I'm not proud of myself for doing so. Naturally, when I read your blast in the paper, my first emotion was to wish you boiled in oil. Then I thought: "No, it's over and done with. Let it pass. Forget it."

But this view I concluded in time was wrong. It implied submissiveness. Hence this letter, meant not so much to slap back at you as to take a definite stand on this business of "cooperation", to inquire, perhaps, what it means and to set you right on a point or two.

You say that for some years you have tried to like me. Ed, how? By seeing me? By talking to me - as friends? No indeed. I haven't seen you since I separated from Franchot. And before that I talked to you exactly twice, once when I was in New York as a visiting fireman - when I asked to see you. You had printed something perfectly silly and I thought it could be straightened out if we talked it over like civilized people. Besides, I thought it high time we met. I remember that you were kind enough to invite Franchot and me to dine with you and your very attractive wife.

Those were the only times I've ever seen you. And for the life of me I cannot remember any great effort you made to know and like me.

I have never "exclaimed that the press of the country has been unfair" to me. I have said, however, that a columnist - any columnist - is unfair to attack anyone who has no means of reply. (This does not include legitimate criticism of commercial entertainment or art by properly qualified critics.)

Certainly I have complained about that. Not for myself alone but for my craft and everyone so attacked. I consider it cheap, tawdry, and gangster journalism. I have never ceased to marvel at the paradox of otherwise respectable newspapers that are serving their community constructively and who, at the same time, permit journalistic lice to stink up their pages. If you so desire, I will tell you that at 42nd Street and Broadway through a loudspeaker.

"While she has been in the East, Miss Crawford was asked by two newspapers to cooperate with them in stunts which would have placed her in a favorable light," you say.

Ed, publicized acts of mine are not premeditated, nor for the purpose of placing me in a favorable light with newspapers or the public.

Goodness knows, certainly I do, that a motion picture actress without a public would be a thing of beauty, perhaps, and a cipher forever. That much is true. But how in the name of heaven does she acquire that public? Because she fell out of a tree into the arms of a movie scout? Or because Darryl Zanuck happened to see a picture of her in a cigarette advertisement? Or because she did some occasional hoofing for the Shuberts?

What this last might explain is merely how she gets into pictures - not how she acquires a public. This public she acquires, if she does, by hard work. But the press, you shriek! Yes, indeed, the papers helped. And the magazines, too. And she is properly grateful. And how does she show it? By doing everything from lolling around in pajamas to jumping through a hoop, for benefit of photographer.

For years she does all that. Comes an occasion when she does not leap through the hoop. Then annihilation! But - supposing we turn to your column:

"On both occasions she delegated the task of breaking the bad news, her refusal, to MGM publicity men. In other words, Joan didn't have the nerve or the courtesy to call the newspapermen or their offices to say no," you lash out.

Since the invitation to appear at the Daily News Harvest Moon Ball came from MGM publicity men it is perfectly natural that the refusal went to them. I even explained that I was in the country with my infant child who was ill with a cold. And whether you like it or not, Ed, I would not have left her for any favorable publicity.

The other affront to a paper, if I must go into weary detail, was perpetrated with even greater innocence on my part. Too late for any possible cancellation of plans, I received a vague and belated request to cooperate in a fashion show to be staged by the Chicago Tribune, for which paper I have nothing but respect. The show would have been under way and over by the time I managed to straighten out my affairs and fly down to Chicago.

Your comment on the box-office results of "Susan and God" places you in the position of having information not available to me. However, if you are interested in accuracy you can probably get the correct information from MGM - and according to Mr. Mayer last week "Susan" was doing all right.

Here's another little gem of yours:

"I don't know really anyone who has gone so far in this business with so little talent as La Crawford."

Aw, Ed, how could you? As long as I was getting away with murder why turn stool pigeon and snitch on me? When one is blessed with such magnificent talents as you are, Ed, you must try to be more patient with the less-fortunate, non-talented Crawfords.

Your petulant "I confess that I've lost patience with Joan Crawford" is Age II stuff. Please, Mr. Dictator, don't banish me because I have lost favor with you.

"No longer will this pillar rush to her defense when other movie stars put the blast on her for her insincerity or her affectations," you write.

Any time you "rush to my defense" it has been because of your own free will. I have never asked you to do so. The times I have seen you and had occasion to talk to you it has been as a friend to whom I desired to give my side of a story in detail. To hell with whether you retracted anything or not. It was you as a person that I wanted to be fair.

My batting average with respect to requests from your paper, The Daily News, has been pretty good. Last April I accepted an invitation and attended a cocktail party given by the News during the publishers' convention. I considered it an honor and a friendly act to be invited. By the same token I considered the invitation to the Harvest Moon Ball as an honor and a friendly act. It was simply impossible for me to attend.

And as for not answering the telephone (as Tyrone Power and Annabella presumably do) what with a "secretary" guarding me from callers, please be informed that the only time I don't happen to pick up a telephone is when my maid - I don't even have a secretary - beats me to it.

From here on your column trails off into a welter of abuse, bearing little or no connection with the subject at hand. You take time off to compare me with George Raft, "a nice guy," who makes the night clubs and does the right thing. I, too, regard George Raft as "a nice guy," just as free to attend night clubs and opening nights at the bistros as I feel free to pass them up, possibly because I don't seem to enjoy these affairs quite so much as Mr. Raft does. Then, too, I don't happen to be financially interested in night clubs as is Mr. Raft.

What I have been trying to say is that what columning needs, apparently, is not only the "divine dispassion" supposedly the very soul of a good reporter, not only the sense of fair play, not only a disposition to remain always selfless and to make a religion of facts, but, above all, a recollection that an actress, even one who makes bad pictures, is an actress, first, and a trained seal secondly.

So that possibly she may be forgiven when she stumbles.

In 1964, when Joan Crawford needed to be replaced in Robert Aldrich's Hush... Hush, Sweet Charlotte, several actresses were considered to play the part opposite Bette Davis, including Vivien Leigh. Vivien declined the role and reportedly said: "I could almost stand to look at Joan Crawford's face at 6am, but not Bette Davis." I don't know what had made Vivien say that (or if indeed she had) but at any rate, a decade earlier Vivien and then-husband Laurence Olivier had been hosts at their home Notley Abbey to a party of people that included Bette and then-husband Gary Merrill. Following the visit, Vivien received flowers from Bette accompanied by a lovely letter as seen below. Bette seemed quite sincere in her admiration for the Oliviers and how she enjoyed her visit with them. While I have tried to find information on how Vivien felt about Bette, apart from the above-mentioned quote, alas I could find nothing. 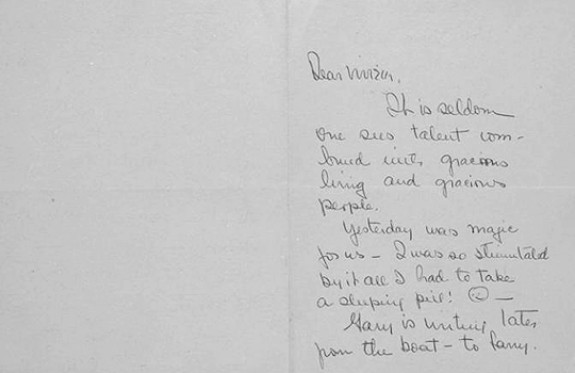 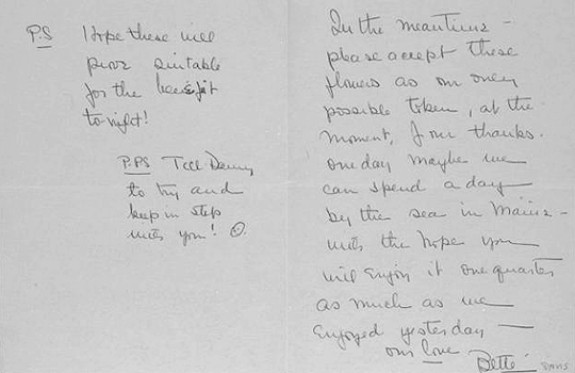 It is seldom one sees talent combined with gracious living and gracious people.

Yesterday was magic for us- I was so stimulated by it all I had to take a sleeping pill! ☺-
Gary is writing later from the boat - to Larry.

In the meantime- please accept these flowers as our only possible token, at the moment, of our thanks.

One day maybe we can spend a day by the sea in Maine- with the hope you will enjoy it one quarter as much as we enjoyed yesterday.

P.S. I hope these will prove suitable for the benefit tonight.

P.P.S. Tell Danny to try and keep in step with you!☺[see photo below]