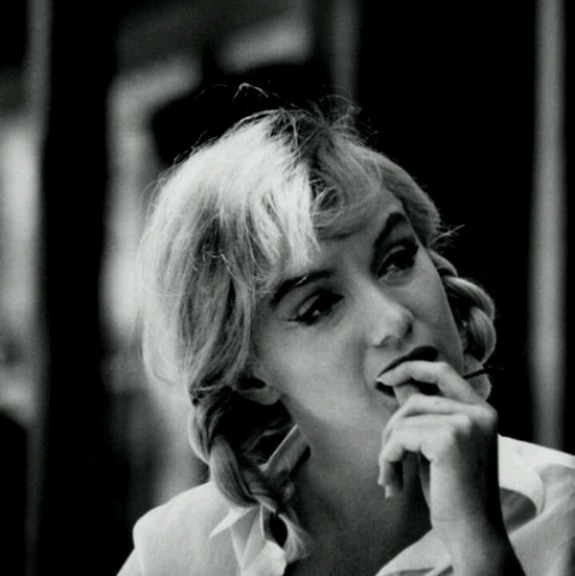 Wishing to become a serious actress, Marilyn Monroe began to study 'method acting' at the Actors Studio in 1955 under the guidance of Lee Strasberg. Because of her shyness Marilyn was also privately tutored by Strasberg at his home, and she also got lessons from Strasberg's wife Paula (a former actress) who became her personal acting coach and confidante. The Strasbergs soon became like a family to Marilyn and were very important to her during the rest of her life and career. (When Marilyn died in 1962, she left the bulk of her fortune to them.)

It was at the recommendation of Lee Strasberg that Marilyn underwent psychoanalysis to deal with her severe depressions. Her first psychoanalyst was Dr. Marianne Kris at whose suggestion Marilyn admitted herself to the Payne Whitney Psychiatric Hospital in New York on 7 February 1961. There she was placed on a ward with severely mentally ill people and was put in a padded cell which was a most harrowing experience to her. (Dr. Kris later admitted that the choice of hospital had been a mistake.) Fortunately, with the help of ex-husband Joe DiMaggio, Marilyn was able to leave the hospital after a few days and was moved to the Columbia University Presbyterian Medical Center where she recuperated.

Shown below is a letter from Marilyn to Lee and Paula Strasberg, written in February 1961 while she stayed at the Payne Whitney Psychiatric Hospital. Crying out for help to get her out of this horrible nightmare, this is what Marilyn wrote: 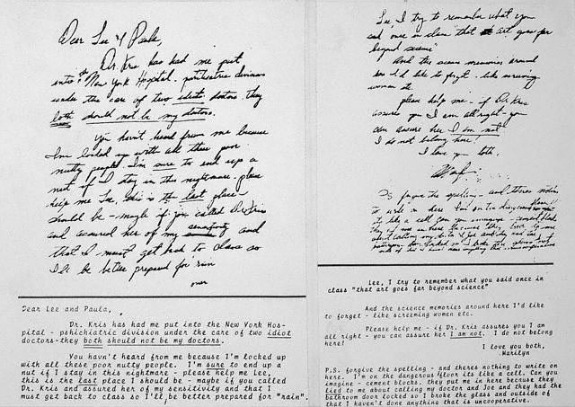 Dr. Kris has had me put into the New York Hospital- pshichiatric [sic] division under the care of two idiot  doctors- they both should not be my doctors .

You haven't heard from me because I'm locked up with all these poor nutty people. I'm sure to end up a nut if I stay in this nightmare- please help me Lee, this is the last place I should be - maybe if you called Dr. Kris and assured her of my sensitivity and that I must get back to class so I'll be better prepared for 'rain'.

Lee, I try to remember what you said once in class "that art goes far beyond science"
And the science memories around here I'd like to forget- like screening women etc.
Please help me- if Dr. Kris assures you I am all right- you can assure her I am not. I do not belong here!

I love you both
Marilyn

P.S. forgive the spelling- and there's nothing to write on here. I'm on the dangerous floor its like a cell. Can you imagine- cement blocks. they put me in here because they lied to me about calling my doctor and Joe and they had the bathroom door locked so I broke the glass and outside of that I haven't done anything that is uncooperative.


Note
Rain (referenced in Marilyn's letter) is a short story by William Somerset Maugham which was going to be adapted for television, starring Marilyn as the prostitute Sadie Thompson. The project never happened, as NBC wouldn't hire Lee Strasberg whom Marilyn insisted on having as her director. 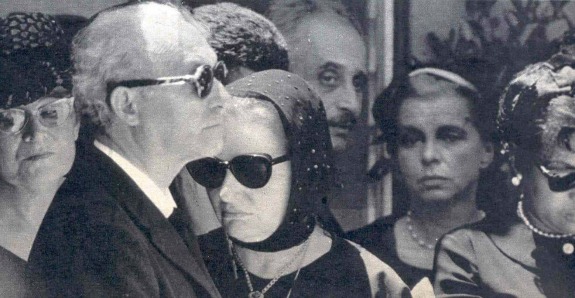 The art of faking letters 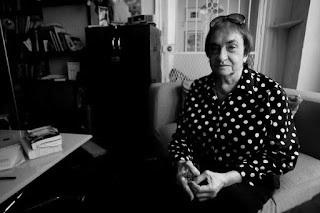 The practice of faking letters and documents has existed ever since men started putting pen to paper. While the earliest forgery dates back to the 8th Century and was about gaining political power, now the forger's aim usually is profit. I only recently read about Lee Israel who was a master literary forger in the 1990s. A biographer and editor, Israel had a hard time finding work in the early 1990s and for more than a year, while broke and addicted to alcohol, she made a living manufacturing and selling numerous letters that she said had been written by famous (dead) people. Israel meticulously researched her subjects, bought several period typewriters and stole vintage paper from the library to make her letters appear authentic. (Two of Noël Coward's letters that she forged even ended up in The Letters of Noël Coward, published by Alfred A. Knopf in 2007.) Later Israel even stole original letters from libraries which she would replace with her forgeries, and the originals she then sold. In June 1993, after having been arrested by the FBI, Israel pleaded guilty and was sentenced to six months house arrest and five years probation. Israel's memoir Can You Ever Forgive Me?: Memoirs of a Literary Forger was published in 2008.

The only names of Hollywood actors I found in connection with Israel are Humphrey Bogart and Louise Brooks. Of Bogart Israel did a one-off letter, but Brooks was a subject she used more often. The following Brooks letter is one of Israel's forgeries. 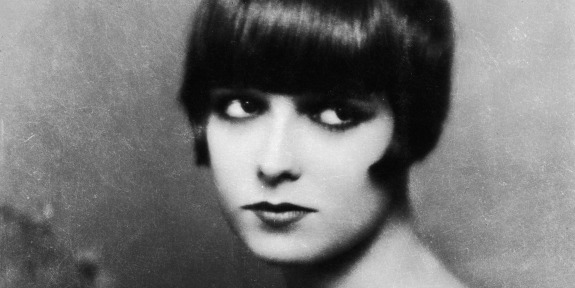 Here are three more letters which are not by Israel but which I believe are fake as well.

Allegedly written by Barbara Stanwyck, the first letter has Barbara call Vivien Leigh a "whore". Seeing that Barbara was such a professional and was even shocked by Joan Crawford's language in this letter, I believe she would never have called Vivien that. But more importantly (as others have pointed out before me), the letter seems to have been written on a computer instead of a typewriter. (Incidentally, I saw the letter being offered on several auction sites, so someone did try to sell it as an authentic Barbara Stanwyck letter.) 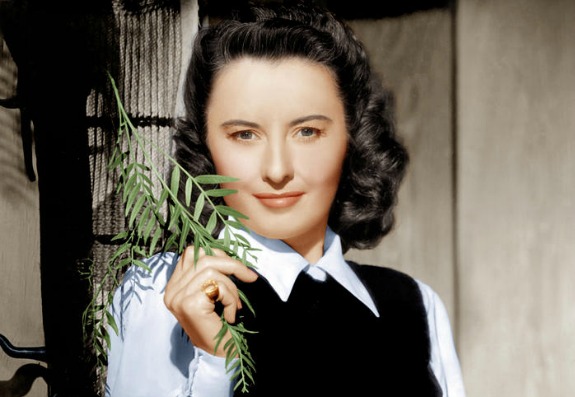 The second letter is a letter Bette Davis allegedly wrote to Joan Crawford on the occasion of her birthday and was reportedly found in Bette's desk drawer. I have serious doubts about the stationery used here, it's very unlike the type of stationery I've seen of Bette. And would she really have written this to Joan, calling her "sluttiest MGM star" and "most psychotic" (not to mention the rest of the letter)? But then again, Bette was reported to have said some nasty things about Joan, like when Joan died: "You should never say bad things about the dead, you should only say good... Joan Crawford is dead. Good." Ouch.

At any rate, I very much doubt this letter is authentic. Makes for fun reading, though. 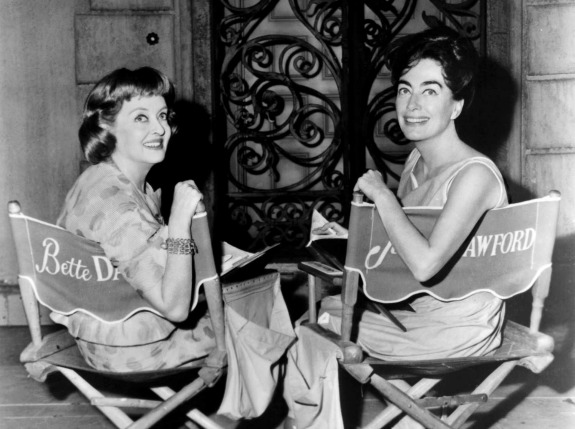 And then there's the following note. It was supposedly written by Marlene Dietrich to Elizabeth Taylor, two women who also hated each other. I don't believe this note is genuine either. It looks like someone was trying hard to copy Marlene's handwriting. (For comparison, see this letter where Marlene writes both in small letters and capitals.) As for the content —even though she hated Elizabeth, would Marlene really have written this?

During Hollywood's Golden Age, it was very common for a studio to loan out a contract player to another studio. Actors usually didn't have a say in the matter as they were virtually owned by the studios. In 1939, Thomas Mitchell was under contract to Columbia Pictures when he was loaned out to other studios for several pictures. While Mitchell did make a few gems for Columbia that year (Mr. Smith Goes to Washington and Only Angels Have Wings), his loan-outs were equally impressive. There was The Hunchback of Notre Dame for RKO Radio Pictures, Stagecoach for independent producer Walter Wanger and Gone with the Wind for Selznick International Pictures.

For Gone with the Wind producer David O. Selznick had to borrow several of his key players. Not only was Mitchell borrowed from Columbia, but Clark Gable came from MGM and Olivia de Havilland from Warner Brothers. (Vivien Leigh was one of Selznick's own contract players.) And of course, each loan-out required a contract. Shown below is part of the agreement between Selznick and Columbia regarding the loan-out of Thomas Mitchell. Interesting to note is that Mitchell would be simultaneously working on GWTW and a Columbia picture entitled Plane No.4 which he had already started to work on (Plane No.4 was the working title for Only Angels Have Wings). Furthermore, it is noteworthy that for his role as Gerald O'Hara in GWTW Mitchell was to earn "on per diem basis at daily rate of 1/6th of $1500.00 per week", which makes $250 per day. 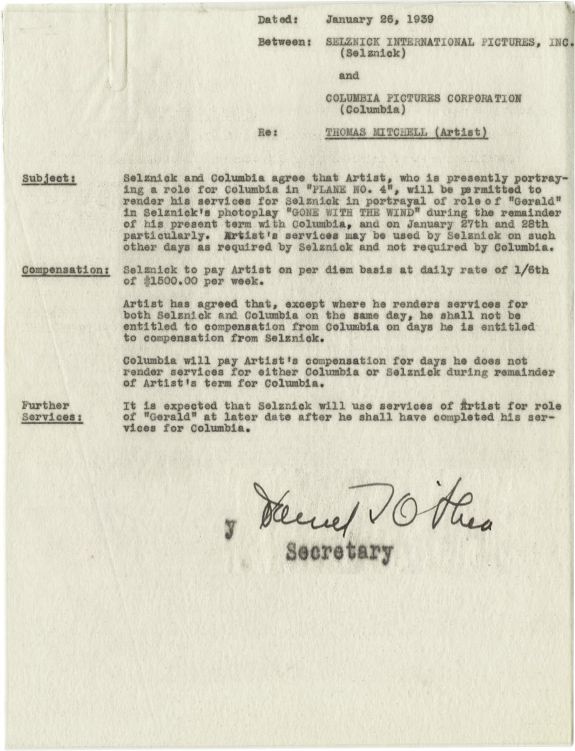 Selznick and Columbia agree that Artist, who is presently portraying a role for Columbia in "PLANE NO.4", will be permitted to render his services for Selznick in portrayal of role of "Gerald" in Selznick's photoplay "GONE WITH THE WIND" during the remainder of his present term with Columbia, and on January 27th and 28th particularly. Artist's services may be used by Selznick on such other days as required by Selznick and not required by Columbia.

Columbia will pay Artist's compensation for days he does not render services for either Columbia or Selznick during remainder of Artist's term for Columbia.

It is expected that Selznick will use services of Artist for role of "Gerald" at later date after he shall have completed his services for Columbia.

By Daniel O'Shea
Secretary [to Selznick]