Searching information online about actress Susan Fox, I found little to nothing. Apparently Fox was one of the many women considered for the role of Scarlett O'Hara in Gone With the Wind (1939) and, according to IMDB, she co-starred with Orson Welles in the 20-minute Welles' comedy The Green Goddess (1939). But that's all I found, with no photo of Fox anywhere. She was obviously an aspiring actress whose Hollywood career never took off.

Robert Ritchie was a MGM publicist and talent scout, responsible for recruiting Hedy Lamarr, Luise Rainer and Greer Garson. He is probably best known for his relationship with Jeanette MacDonald in the early 1930s. Ida Koverman (a friend of MacDonald's and secretary to MGM boss Louis B. Mayer) had once described Ritchie as "a schnorrer or parasite".

In the letter below —postmarked 3 January 1940 and addressed to Howard Hughes— Susan Fox complains about Ritchie hindering her career after she had refused to sleep with him. It's ironic that Fox should be complaining to Hughes about Ritchie, considering Hughes also abused his power to obtain sexual favours from women. Reportedly Hughes was a friend of Fox, as was Katharine Hepburn who is also mentioned in the letter. In the end, as said, Fox's film career never happened; perhaps it was her experience with Ritchie that made her pursue a different career. 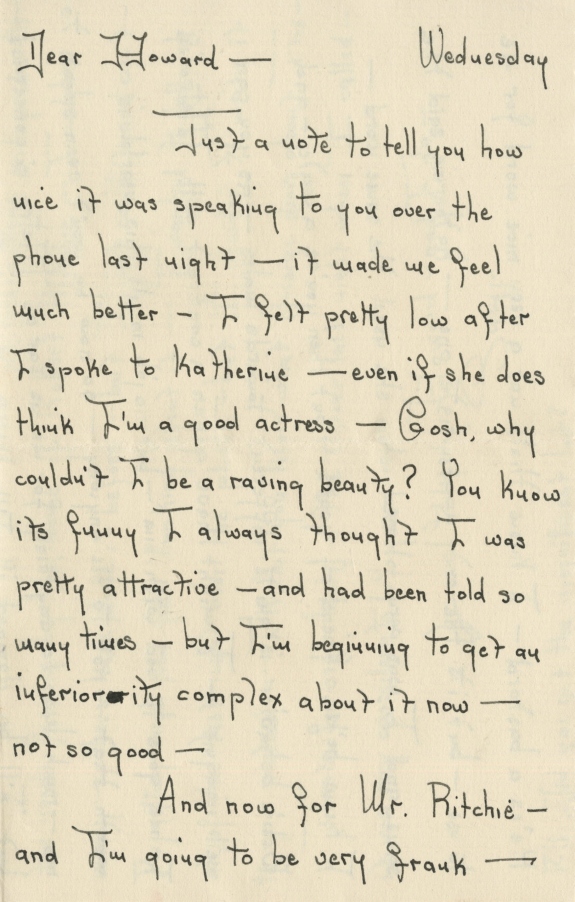 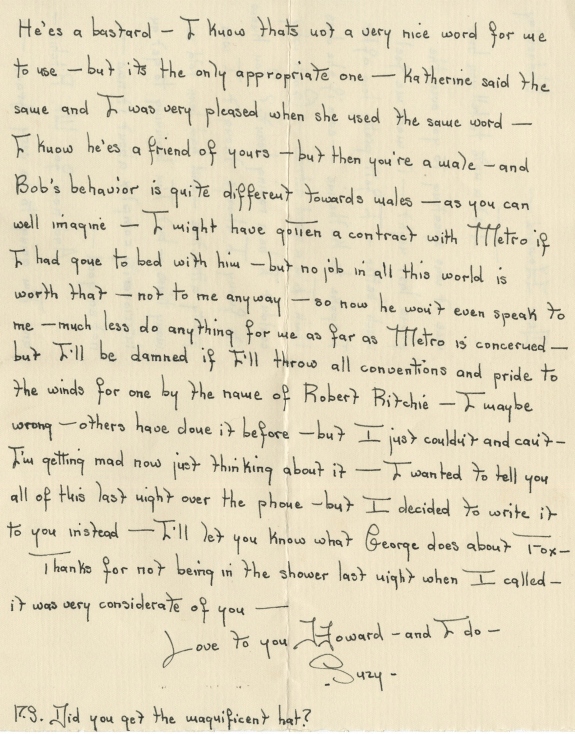 Source: Heritage Auctions
Transcript:
Wednesday
Dear Howard -
Just a note to tell you how nice it was speaking to you over the phone last night - it made me feel much better - I felt pretty low after I spoke to Katherine [sic] - even if she does think I'm a good actress - Gosh, why couldn't I be a raving beauty? You know it's funny I always thought I was pretty attractive - and had been told so many times - but I'm beginning to get an inferiority complex about it now - not so good -
And now for Mr. Ritchie - and I'm going to be very frank - He's a bastard - I know that's not a very nice word for me to use - but it's the only appropriate one - Katherine [sic] said the same and I was very pleased when she used the same word - I know he's a friend of yours - but then you're a male - and Bob's behavior is quite different towards males - as you can well imagine - I might have gotten a contract with Metro if I had gone to bed with him - but no job in all this world is worth that - not to me anyway - so now he won't even speak to me - much less do anything for me as far as Metro is concerned - but I'll be damned if I'll throw all conventions and pride to the winds for one by the name of Robert Ritchie - I may be wrong - others have done it before - but I just couldn't and can't - I'm getting mad now just thinking about it - I wanted to tell you all of this last night over the phone - but I decided to write it to you instead - I'll let you know what George does about Fox -
Thanks for not being in the shower last night when I called - it was very considerate of you -
Love to you Howard - and I do -
Suzy
P.S. Did you get the magnificent hat?
Posted by Clarissa Saunders
Tags: Howard Hughes, Susan Fox