The successful collaboration between director Alfred Hitchcock and music composer Bernard Herrmann abruptly ended over Torn Curtain (1966). The two men had worked together on eight films, with Herrmann composing the score for The Trouble with Harry (1955), The Man Who Knew Too Much (1956), The Wrong Man (1956), Vertigo (1958), North by Northwest (1959), Psycho (1960) and Marnie (1964). On The Birds (1963), which doesn't have actual music but natural and electronic bird sounds, Herrmann had served as a sound consultant. Following Marnie, Torn Curtain was the next Hitch-Hermann project but artistic differences led Hitchcock to eventually fire Hermann, thereby ending their longtime collaboration and friendship. 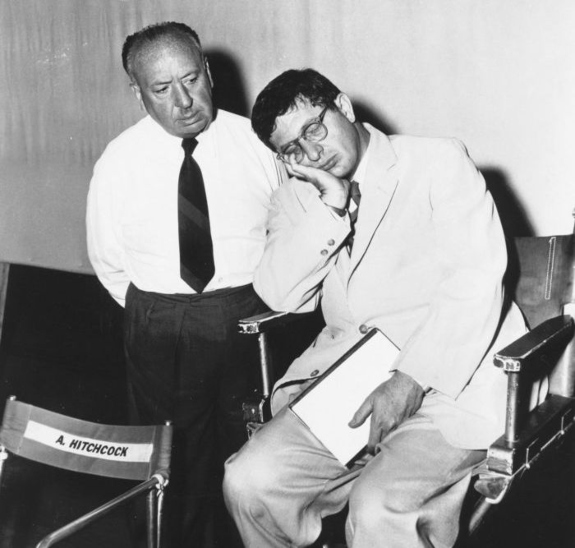 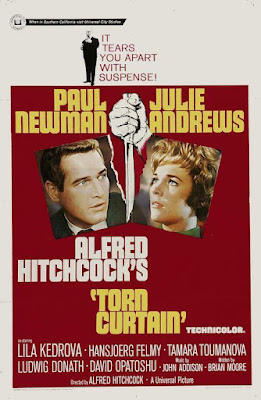 Universal initially didn't want Herrmann to score Torn Curtain but Hitchcock insisted he'd be hired. Once Herrmann was on board, Hitch —under pressure to deliver a hit film after the critical and box-office failure of Marnie— instructed him not to compose a conventional symphonic score but a pop/jazz score that would appeal to younger audiences. Universal wanted a modern score and Hitch went along with the studio, also because he was afraid of becoming old-fashioned. In the end, Herrmann composed music he felt was appropriate for the film, a typical Hermann score which was precisely what Hitch and Universal did not want.
A confrontation between Hitchcock and Herrmann seemed inevitable and things eventually came to a head in late March 1966. Herrmann was recording his score at the Goldwyn Studios in Los Angeles when Hitch walked in unannounced. The director was extremely unhappy with what he heard and there was a big scene, with Hitch sending home the orchestra, cancelling the rest of the recording session ánd firing Herrmann. It was the sad end of a decade-long collaboration and friendship. Hitch and Herrmann never spoke cordially to each other again. Years later when asked if he would work with Herrmann again, Hitch simply said: "Yes, if he'll do as he's told".
British composer John Addison was eventually hired as Herrmann's replacement, but his score couldn't save Torn Curtain from becoming both a critical and commercial failure. To listen to Addinson's "Main Title" for Torn Curtain, click here; for Herrman's unused score, go here (I personally prefer Hermann's music).
_____
Several months before their collaboration would come to an end, on 4 November 1965 Hitchcock sent the following telegram to Herrmann. At that time Hitch was still eager to work with the composer, although he criticised Herrmann's score for Joy in the Morning (1965), finding it "extremely reminiscent of the Marnie music". To meet audience demands, Hitch urged Hermann to write a modern score for Torn Curtain, something with "a beat and a rhythm". Herrmann answered Hitch the very next day, his telegram (possibly meant ironically) seen below as well.

Source of both telegrams: Hitchcock's Notebooks: An Authorized And Illustrated Look Inside The Creative Mind Of Alfred Hitchcock (1999) by Dan Auiler.