She walked through the film without trying to give herself

Lauded for her consumate professionalism, Barbara Stanwyck was an actress whom directors, fellow actors and crew members loved to work with. When Ella Smith was preparing her 1973 biography Starring Miss Barbara Stanwyck, she received many letters from those who had worked with Barbara, all having nothing but praise for her (read some of those letters here). However, director William Dieterle, who collaborated with Barbara on The Secret Bride (1934), was not as enthusiastic about her as others were. Below you'll find his letter to Ella Smith in which he talks about Barbara and The Secret Bride (mentioned here under its working title Concealment).

At the time of The Secret Bride, Barbara had a non-exclusive contract with Warner Bros that she wanted to get out of. However, as much as she hated the film's script, according to Victoria Wilson's A Life of Barbara Stanwyck: Steel-True 1907-1940 (2013) Barbara couldn't afford to be suspended. She accepted the role, needing the income to support her husband Frank Fay and their adopted son Dion and to pay for the staff, the house, the cars et cetera. For The Secret Bride Barbara was paid $50,000. 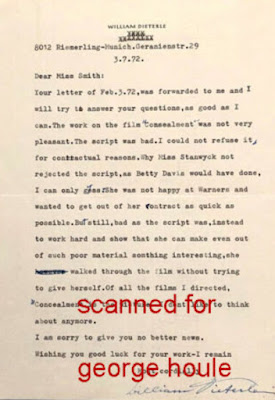 Your letter of Feb.3.72, was forwarded to me and I will try to answer your questions, as good as I can. The work on the film "Concealment" was not very pleasant. The script was bad. I could not refuse it, for contractual reasons. Why Miss Stanwyck not rejected the script, as Betty Davis would have done, I can only guess. She was not happy at Warners and wanted to get out of her contract as quick as possible. But still, bad as the script was, instead to work hard and show that she can make even out of such poor material something interesting, she walked through the film without trying to give herself. Of all the films I directed, "Concealment" is the picture I don't like to think about anymore.

I am sorry to give you no better news.

Wishing you good luck for your work- I remain

Incidentally, Victoria Wilson mentions an incident in her book that involved Barbara and Dieterle while filming The Secret Bride. Barbara's stand-in Katie Doyle, of whom the actress was very fond, had accidently walked through a scrim which the crew had just spent an hour repairing. Dieterle was furious with Doyle and began reprimanding and scolding her. Barbara then walked up to the director and said: "Don't you ever dare talk to anybody on any set that I am on, don't you ever dare talk to anybody like that again. The next time you do, I walk. I go right up to the office and I will not finish the picture under your direction."