What I want to know is, is that April Fool? 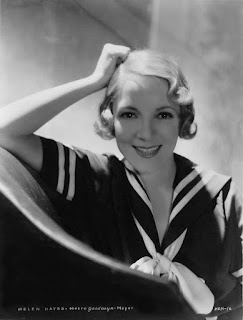 Often dubbed "First Lady of the American Theatre", Helen Hayes made her Broadway debut in 1909 at age nine and by the time she was twenty, she was well on her way to become a big Broadway star. Throughout the 1920s, Hayes appeared in successful plays like Caesar and Cleopatra (1925) and Coquette (1927) and, as her star rose, it didn't take long for Hollywood to come calling. Hayes declined several studio offers but then the Great Depression hit, causing theatre attendance to drop dramatically. When MGM offered her a lucrative seven-year contract in 1931 —with the possiblity to periodically perform on Broadway— Hayes felt she had little choice but to accept.
In her 1990 memoir My Life in Three Acts, Hayes wrote that MGM didn't really know what do with her. "I didn't have [Joan] Crawford's bone structure or [Greta] Garbo's mystery. I wasn't sexy like [Jean] Harlow or naughty like Marion [Davies], and I didn't have the figure to carry off clinging white satin like Norma [Shearer]. There were so many things I didn't have or wasn't, that it seemed best for me to quit then and there. But Mr. Mayer had an idea. I would be promoted as "The Great Actress"."
MGM put Hayes into melodramas and her first film was The Sin of Madelon Claudet (1931), for which she immediately won the Oscar for Best Actress. Next she played in dramas such as Arrowsmith (1931) with Ronald Colman; A Farewell to Arms (1932) with Gary Cooper; and The White Sister (1933) opposite Clark Gable. It was after she had starred in the romantic comedy What Every Woman Knows (1934), with Brian Aherne and Madge Evans, that Hayes made the decision not to stay in Hollywood but to return to the stage.
What Every Woman Knows was based on the 1908 play of the same name by J. M. Barrie and in 1926 Hayes had starred in a Broadway revival of the play. The play was very special to Hayes, her role in it one of her favourite stage roles. She had high hopes for the film version but after reading the script her hopes were immediately crushed. "Barrie's delicate comedy had been torn apart in the most insensitive way", Hayes later said. "I protested, but was told to stick to acting and let others worry about writing and directing." After the film was finished and Hayes saw the preview, it left her devastated. It was then that she decided to leave Hollywood for good.

Wishing to be released from her contract, Hayes went to see Eddie Mannix, MGM's general manager. She thought MGM was glad to be rid of her but Mannix wouldn't let her go. He told her that she still had a contractual obligation to do Vanessa: Her Love Story (1935) and if she refused, MGM would sue her for the $96,000 that was already spent on pre-production. Hayes saw no other option but to make Vanessa, in which she co-starred with Robert Montgomery.
While Hayes did have a few years left on her contract, MGM had assured her they wouldn't hold her to it. Imagine her surprise then when she received a letter from Eddie Mannix in April 1935, saying that "Metro had renewed [her] option". Clearly annoyed, the actress replied: 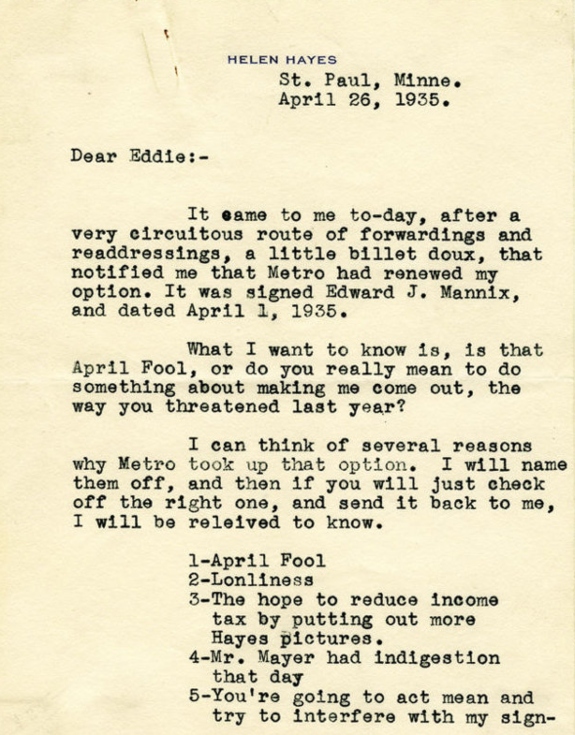 Vanessa: Her Love Story  remained Hayes' last film for MGM. Hayes would return to Hollywood but not until 1952 —after a 17-year absence— to star in Leo McCarey's My Son John. Sporadically she accepted other film offers, most notably Anastasia (1956) and Airport (1970). It was for her performance as a stowaway in the latter film that Hayes received her second Oscar, this time for Best Supporting Actress.
Posted by Clarissa Saunders
Tags: Eddie Mannix, Helen Hayes, MGM