Let him look a little swashbuckling, for Christ sakes!

Inspired by the box-office successes of MGM's Treasure Island (1934) and United Artists' The Count of Monte Cristo (1934), Warner Brothers made its own swashbuckler film in 1935— Captain Blood, directed by Hungarian-born Michael Curtiz. Based on the 1922 novel of the same name by Rafael Sabatini, Captain Blood tells the story of Doctor Peter Blood who, after being wrongly convicted of treason and being sold as a slave, escapes with his fellow slaves and eventually becomes the most feared pirate of the Caribbean. (For a full synopsis, go here.)
Finding the right actor to play Peter Blood proved to be a difficult task. While Robert Donat was signed to play Blood in December 1934, due to ill health (asthma) he eventually bowed out. Clark Gable and Ronald Colman were considered for the role but they had to be borrowed from MGM, so studio boss Jack Warner and producer Hal Wallis decided to let them go. Other candidates were Fredric March, Leslie Howard, Brian Aherne, George Brent and Ian Hunter — all experienced actors who were ultimately uninterested or unsuited. And then there was also Australian newcomer Errol Flynn, who had previously played in an Australian film In the Wake of the Bounty (1933) and done bit parts in The Case of the Curious Bride (1935) and Don't Bet on Blondes (1935). By July 1935, after many months of casting, Warners still had no Peter Blood and eventually decided to take a chance on the inexperienced, 26-year-old Flynn (a considerable risk since Captain Blood was a big-budget project). On 8 July, Jack Warner wrote to studio executive Irving Asher, seemingly confident about their choice:"[I] am sure Flynn will come through with flying colors. His tests are marvelous. If he has anything at all on the ball he will surely come out in this picture and go to great heights. If he hasn't it will be one of those things, but we will do all in our power to put Flynn over in grand style." 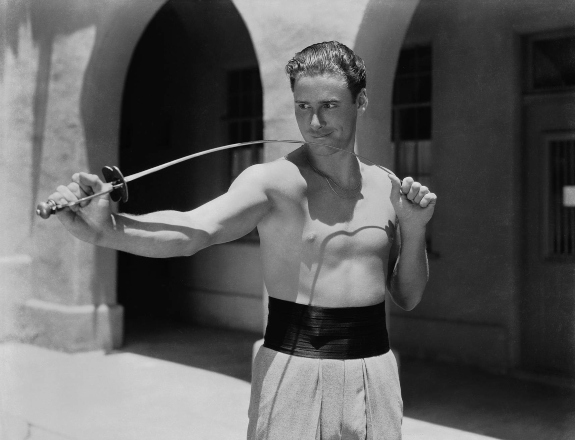 In the end, Warners' gamble paid off. Captain Blood became a huge box-office hit and its leads Errol Flynn and Olivia de Havilland, who had been cast in favour of Jean Muir, became overnight stars. Having rewatched Captain Blood for this post —I had not seen the film in ages— I can only say that it was as great an adventure as I remembered. Errol is fantastic as the swashbuckling hero, brimming with infectious energy, and Olivia —very young (only 19) and radiantly beautiful— is perfect as his leading lady. With their chemistry jumping off the screen, it seems only natural that they would go on to make another seven movies together. 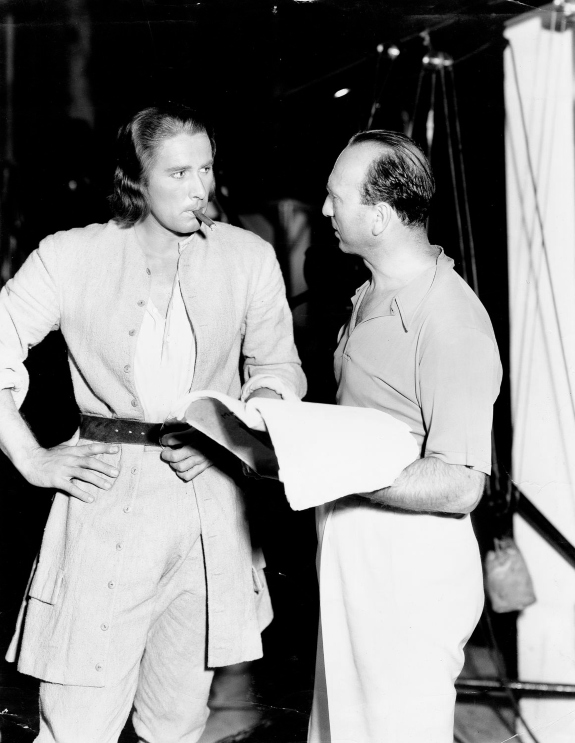 While Captain Blood turned out to be a big success, the shooting of the film was an often frustrating experience for Hal Wallis. After Darryl Zanuck left the studio in 1933 due to a salary dispute with Jack Warner, Wallis had taken over from Zanuck as head of production and Captain Blood was his most important project thus far. With so much at stake —the film had a budget of one million dollars — Wallis was determined to make it a success. His collaboration with director Michael Curtiz, however, was not without problems. Curtiz, who was a personal friend of Wallis, was someone who liked to do things his own way. Wallis, in turn, wanted to control every aspect of the production and throughout filming kept bombarding Curtiz with memos, demanding all kinds of changes and also giving advice to Curtiz on how to direct the cast (especially how to handle an insecure Flynn).

Here are two of the many memos from Wallis to Curtiz, both written after Wallis had watched the daily rushes, clearly feeling exasperated and frustrated by what he'd seen. Much to the producer's annoyance, Curtiz simply ignored his memos and continued to direct the film in his own way. (Despite their professional differences, Wallis held Curtiz in high esteem and would later call him his "favorite director, then and always".)

TO: Curtiz
FROM: Wallis
DATE: August 28, 1935
SUBJECT: "Captain Blood"
I am looking at your dailies, and, while the stuff is very nice, you got a very short day's work. I suppose this was due to bad weather.
However, I don't understand what you can be thinking about at times. That scene in the bedroom, between Captain Blood and the governor, had one punch line in it; the line from Blood: "I'll have you well by tonight, if I have to bleed you to death," or something along these lines, anyhow. This is the one punch line to get over that Blood had to get out of there by midnight, even if he had to kill the governor, and instead of playing that in a close-up —a big head close-up— and getting over the reaction of Errol Flynn, and what he is trying to convey, and the crafty look in his eye, you play it in a long shot, so that you can get the composition of a candle-stick and a wine bottle on a table in the foreground, which I don't give a damn about.
Please don't forget that the most important thing you have to do is to get the story on the screen, and I don't care if you play it in front of BLACK VELVET! Just so you tell the story; because, if you don't have a story, all of the composition shots and all the candles in the world aren't going to make you a good picture. ...
Hal Wallis

I have talked to you about four thousand times, until I am blue in the face, about the wardrobe in this picture. I also sat up here with you one night, and with everybody else connected with the company, and we discussed each costume in detail, and also discussed the fact that when the men get to be pirates that we would not have "Blood" dressed up.

Yet tonight, in the dailies, in the division of the spoil sequence, here is Captain Blood with a nice velvet coat, with lace cuffs out of the bottom, with a nice lace stock collar, and just dressed exactly opposite to what I asked you to do.

I distinctly remember telling you, I don't know how many times, that I did not want you to use lace collars or cuffs on Errol Flynn. What in the hell is the matter with you, and why do you insist on crossing me on everything that I ask you not to do? What do I have to do to get you to do things my way? I want the man to look like a pirate, not a molly-coddle. ...

I suppose that when he goes into the battle with the pirates (the French) at the finish, you'll probably be having him wear a high silk hat and spats.

When the man divided the spoils you should have had him in a shirt with the collar open at the throat, and no coat on at all. Let him look a little swashbuckling, for Christ sakes! Don't always have him dressed up like a pansy! I don't know how many times we've talked this over. ...

I hope that by the time we get into the last week of shooting this picture, that everybody will be organized and get things right. It certainly is about time. 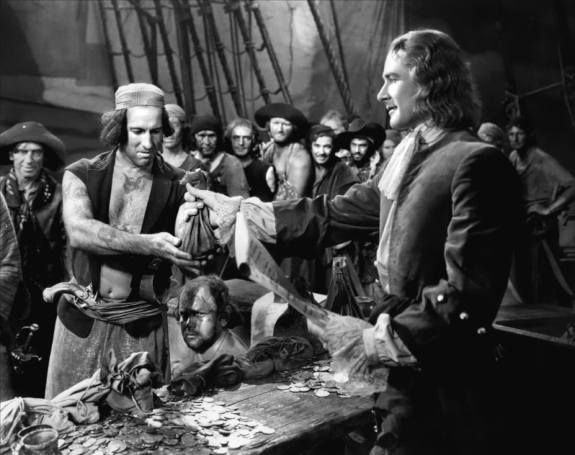