I have such a strong, tender, wonderful memory

During four months in 1960, Marilyn Monroe and Arthur Miller lived in a bungalow at the Beverly Hills Hotel while the bungalow next door was occupied by their French friends, famed film couple Yves Montand and Simone Signoret. Miller had met Montand and Signoret in Paris in 1956, when the two starred in the play Les Sorcières de Salem, a French adaptation of Miller's own 1953 play The Crucible. (They would later also star in the 1957 French film version.) Miller became friends with the couple, sharing the same leftist political views. Several years later, in the fall of 1959, Montand and Signoret came to New York where Montand would enjoy great successes on Broadway with his one-man show An Evening with Yves Montand. It was then that the Montands also met Marilyn and eventually befriended her too.

While the two couples were living side by side at the Beverly Hills Hotel in bungalows No. 20 and 21, Marilyn and Montand were filming Let's Make Love (1961) and Miller was one of the writers working on the film's screenplay. Production of the film was plagued with difficulties, including the usual problems with Marilyn (her lateness and inability to remember her lines) and the fact that Montand didn't speak English, having to learn his lines phonetically. It is said that the issues Montand and Marilyn were each having during filming eventually caused them to bond. When their respective spouses left for other commitments, the two grew closer and started a much-publicised affair. 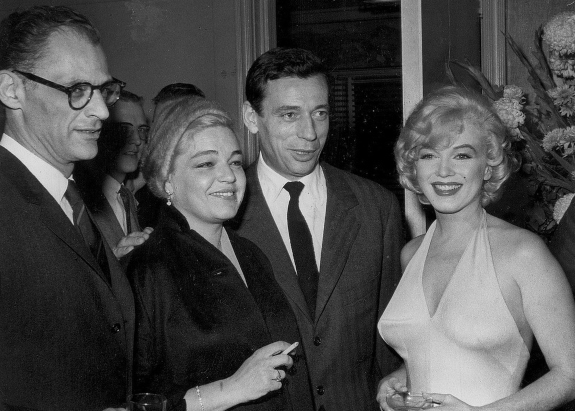 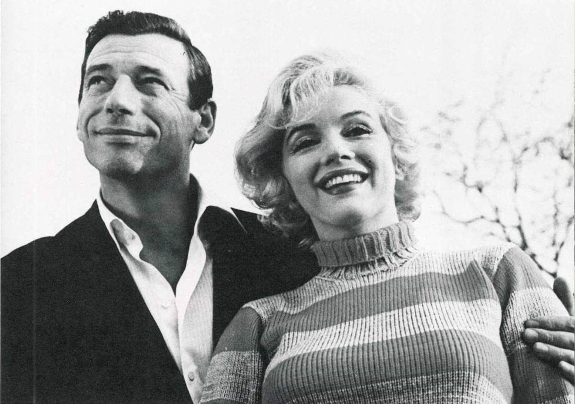 The affair between Montand and Marilyn reportedly ended after shooting of Let's Make Love had wrapped. Marilyn's marriage to Miller was already in trouble when filming began and the two would divorce in early 1961. The Montands returned to France and remained married until Signoret's death of cancer in 1985. While Simone was very hurt and embittered by the affair and the scandal that followed, she never blamed Marilyn. In her autobiography Nostalgia Isn't What It Used To Be (1975) Signoret wrote:

She never knew how thoroughly I had understood the story that was no one's business but ours, the four of us. Too many people were concerned with it during troubled times when many more important things were happening.

She's gone without ever knowing that I never stopped wearing the champagne‐colored silk scarf she'd lent me one day when I was being photographed. It went well with what I was wearing; so well that she made me a present of it. It's a bit frayed now, but if I fold it carefully, that doesn't show. 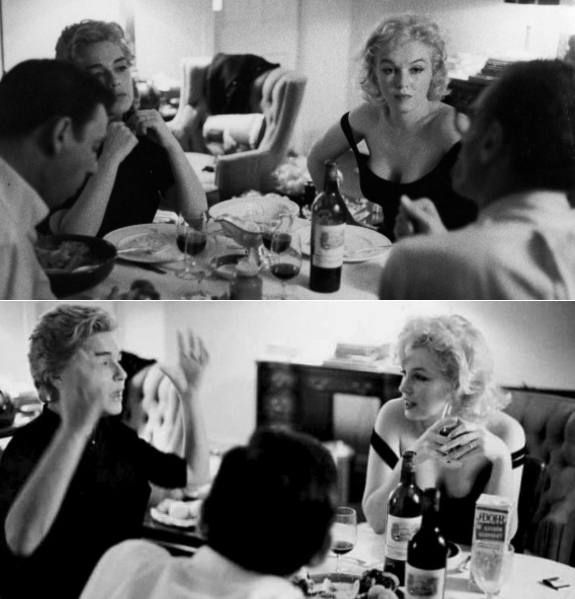 Below are a few pieces of correspondence, the first one a letter from Marilyn to Yves Montand written on 24 September 1959. Three days earlier Marilyn had attended the premiere of Montand's one-man show at the Henry Miller Theater on Broadway. Her escort mentioned in the letter was Montgomery Clift. 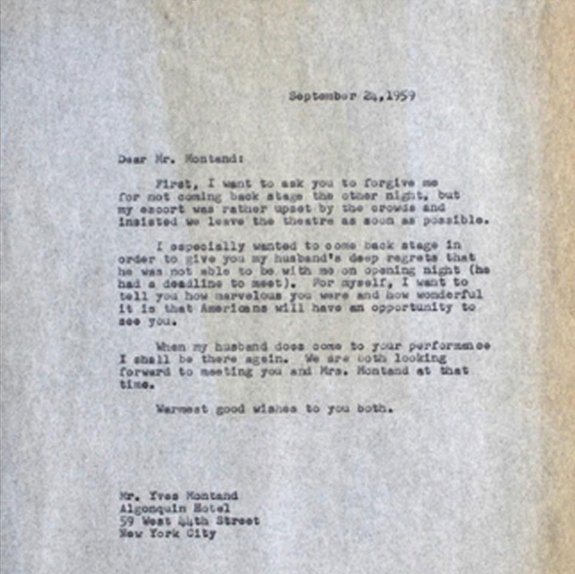 Source: Cursum Perficio
Transcript:
September 24, 1959
Dear Mr. Montand:
First, I want to ask you to forgive me for not coming back stage the other night, but my escort was rather upset by the crowds and insisted we leave the theatre as soon as possible.
I especially wanted to come back stage in order to give you my husband's deep regrets that he was not able to be with me on opening night (he had a deadline to meet). For myself, I want to tell you how marvelous you were and how wonderful it is that Americans will have an opportunity to see you.
When my husband does come to your performance I shall be there again. We are both looking forward to meeting you and Mrs. Montand at that time.
Warmest good wishes to you both.
Mr. Yves Montand
Algonquin Hotel
59 West 44th Street
New York City
__________
A Christmas card and drawing from the Montands to Marilyn. I don't know who was the artist here, Yves or Simone.
Simone and Yves sent Marilyn some flowers or perhaps left them at her bungalow when Marilyn was out. At any rate, the flowers were accompanied by the following card. 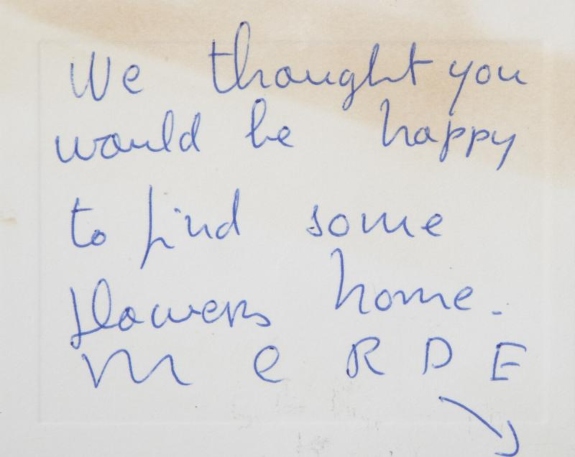 And a few lines from Marilyn regarding Montand. The lines were part of a P.S. in a letter she had written to her psychiatrist Dr. Ralph Greenson in 1961. Marilyn was reportedly in love with Montand, hoping against hope he would marry her.
Posted by Clarissa Saunders 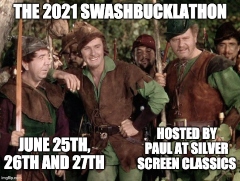