For the film adaptation of his 1940 acclaimed novel For Whom the Bell Tolls, Ernest Hemingway wanted Gary Cooper and Ingrid Bergman to play the lead roles. The author was a good friend of Cooper's but didn't meet Bergman until January 1941 at Jack's Restaurant in San Francisco. During lunch they discussed the possibility of Bergman portraying the Spanish Maria, a part she really wanted to play. Being a Nordic, however, Bergman was concerned that she wouldn't be right for the role. Hemingway immediately told her not to worry and afterwards gave her a copy of his novel with the inscription: "For Ingrid Bergman, who is the Maria of this story". (For Whom the Bell Tolls (1943) was eventually made with Cooper and Bergman in the leads, like Hemingway wanted, and was directed by Sam Wood.) 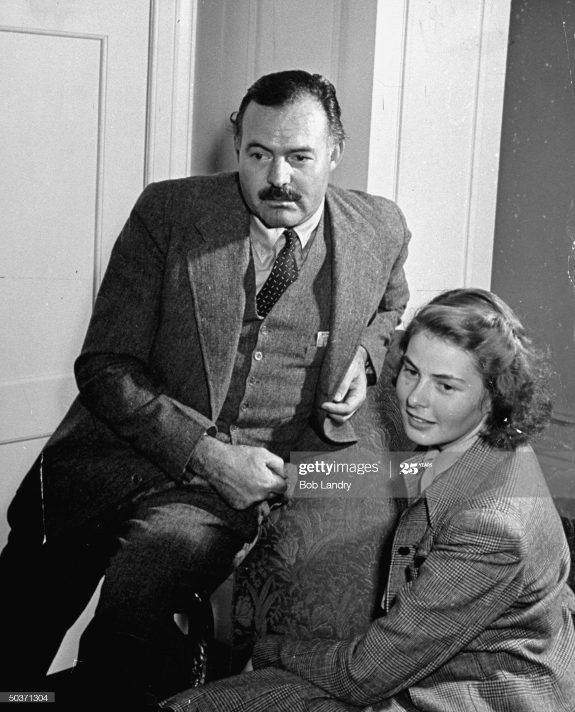 Bergman and Hemingway eventually became close friends. Hemingway was one of the people who had supported Bergman during one of the most difficult periods of her life. In 1949, the actress started an affair with Italian filmmaker Roberto Rossellini, leaving her husband Petter Lindström and daughter Pia behind in Sweden and causing a huge scandal (read more in this post). Exiled from Hollywood and declared persona non grata in the USA, Bergman fortunately still had her friends to count on, many of whom sent her letters of encouragement and support.
In the midst of the scandal Hemingway wrote Bergman the following letter, wishing to let her know that he loved her and that he was her unconditional friend. He also included a warning for Rossellini to better treat his friend right or else (".. he better be a damned good boy for you or Mister Papa will kill him some morning when he has a morning free"). Hemingway is said to have disliked Rossellini, whom he referred to as "the twenty-two pound rat".
__________

Dear Ingrid:
Here's your contact, daughter. How is Stromboli? How is Calabria? I have a sort of idea how they are. (Beautiful and Very Dirty.) But how are you? That's what's important. (Maybe you are very beautiful and very dirty too?)
Your letter with Petter's fine P.S. came here to hospital in Padova where I have been with an infected eye. I got it the day you arrived in Italy. How's that for long-distance contact?
Am on my fifth million units of penicillin (they punch my derriere like a time clock every three hours) but fever now is normal and the infection which turned into Erysipelis (no relation to syphilis) but knocked it finally....

[The above part was written from Villa Aprile, Cortina d'Ampezzo in Italy and then Hemingway continued from Finca Vigia, San Francisco de Paula in Cuba:]

What happened was that I got sicker after I wrote that first part and I had to use a lot more penicillin and my eye was too bad to write.
Then I read all that stuff about you and Rossellini and Petter and I didn't know what to write. Now I've had time to think it over (still knowing nothing of what goes on) and I do know I love you very much and am your same solid true friend no matter what you ever do, or decide or where you ever go. The only thing is that I miss you.
Listen daughter, now I have to make speech. This is our one and only life as I once explained to you. No one is famous nor infamous. You are a great actress. I know that from New York. Great actresses always have great troubles sooner or later. If they did not they would not be worth a shit. (Bad word you can delete it.) All things great actresses do are forgiven.
Continue speech: Everybody reaches wrong decisions. But many times the wrong decision is the right decision wrongly made. End of speech.
New speech: Do not worry. It never helped anything ever.

Finished with speeches. Daughter, please don't worry and be a brave and good girl and know you have, only this short distance away, two people, Mary and me, who love you and are loyal to you.
Let's be cheerful now like when we used to drink together... Remember this is Holy Year and everybody is pardoned for everything. Maybe you can have quintuplets in the Vatican and I will come and be a first time godfather...
If you love Roberto truly give him our love and tell him he better be a damned good boy for you or Mister Papa will kill him some morning when he has a morning free.
Ernest
P.S. This is a lousy letter but we live in the lousiest times there ever were I think. But it is our one and only life so we might as well not complain about the ball park we have to play in.
We had a wonderful time in Italy. I love Venice in the non-tourist time and all the country around it and the Dolomites are the best mountains I know. I wish you had not been working and could have come up and stayed with us in Cortina d'Ampezzo. I tried to call you up from the hospital, but they said you were in some place without a phone.
Maybe this will never get to you. It certainly won't if I don't send it off. Good luck my dear. Mary sends her love.
Ernest (Mister Papa)