Eccentric billionaire, business tycoon, aviator and film producer Howard Hughes dated a lot of famous Hollywood actresses (including Katharine Hepburn, Ava Gardner, Bette Davis, Ginger Rogers and Gene Tierney) but married only one — Jean Peters. The two had met at a party in 1946 and had an on-and-off romance for several years. In 1954, Peters married Texas oilman Stuart Cramer but the marriage was shortlived and afterwards she resumed her relationship with Hughes. Peters and Hughes, then resp. thirty and fifty-one years old, eventually tied the knot in a secret ceremony in Tonopah (Nevada) in May 1957. During her marriage to Hughes, Peters abandoned her film career and hardly ever appeared in public. She refused to give interviews about her life with Hughes, even after their divorce in 1971. (As a divorce settlement Peters was given a relatively modest $70,000 per year. She never made any claims on Hughes' estate.)

The Peters-Hughes marriage was, to say the least, unconventional. After the couple got married, they lived in separate bungalows at the Beverly Hills hotel for several years. When they finally moved in together —at Peters' insistence— they still had their own living quarters, seeing each other only occasionally. It was during his marriage with Peters that Hughes became more and more mentally unstable. He got obsessed with germ contamination and also developed bizarre rituals (e.g. storing his own urine in jars). Hughes' behaviour grew increasingly weird and at some point Peters couldn't see her husband anymore unless she made an appointment through one of his aides. With Hughes turning into a recluse, Peters continued to live her own life while pursuing her own interests, like studying sociology at UCLA in 1969. In the end, the couple had spent more time apart than together during a marriage that lasted fourteen years.

Several Hughes biographers have speculated about why Hughes married Peters when he did, having been a bachelor for thirty years.* They believe that Hughes (already mentally unstable by the time he married Peters) was afraid the CEO of his company Noah Dietrich was going to declare him mentally incompetent and have him committed. Being married would protect him from this, since in California a husband could not be committed without the consent of his wife.

While Hughes may have had an ulterior motive for marrying Peters, he seemed to have loved her (and she him), judging from the following messages they wrote to each other. (It is even said that Peters was the only woman Hughes had ever loved.) Living in separate quarters, the couple was known to communicate through handwritten notes, i.e. messages often written on the same piece of paper which were (I imagine) carried back and forth between them by one of Hughes' aides. The notes below are undated, but were written at a time in their marriage when Peters and Hughes would see each other briefly around 11 PM before returning to their separate bedrooms.

*Note
Hughes was married once before to Ella Botts Rice from 1925 until 1929. Actress Terry Moore said she had also been Hughes' wife, having married him in 1949 aboard a ship with the ceremony performed by the ship captain. Moore claimed that Hughes had destroyed the ship log, so there was no official record of their marriage. 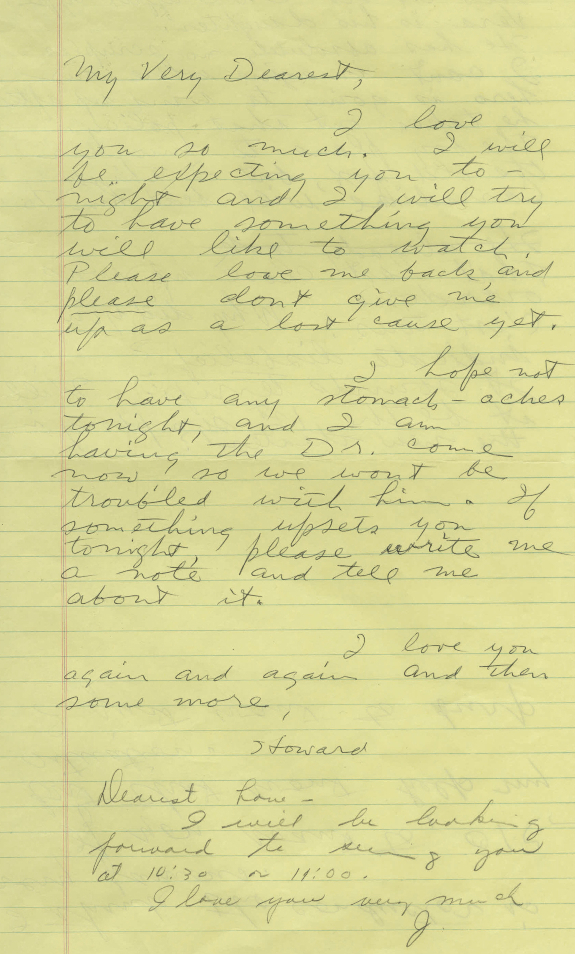 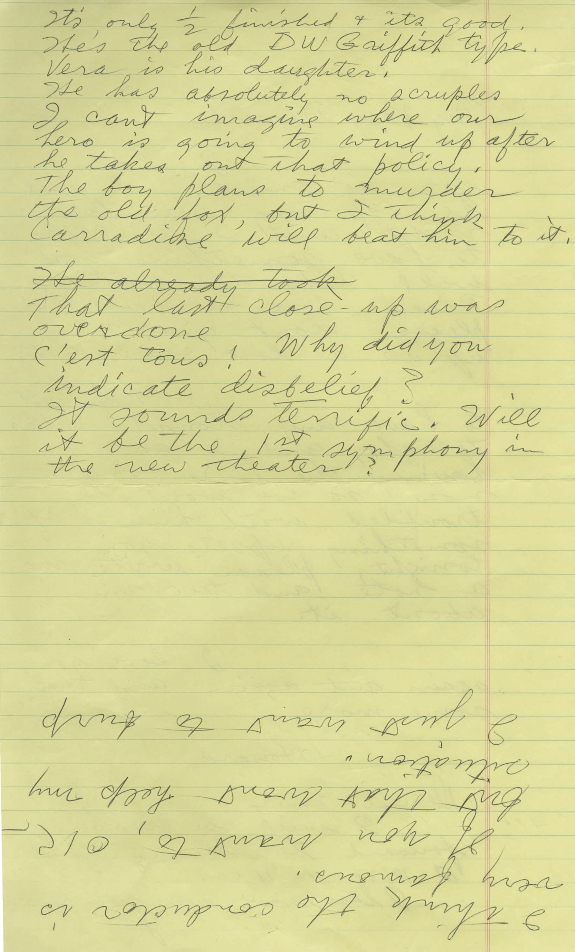 I love you so much. I will be expecting you tonight and I will try to have something you will like to watch. Please love me back and please don't give me up as a lost cause yet.

I hope not to have any stomach-aches tonight, and I am having the Dr. come now, so we won't be troubled with him. If something upsets you tonight, please write me a note and tell me about it.

(Hughes)
It's only 1/2 finished + it's good. She's the old D W Griffith type. Vera is his daughter. He has absolute no scruples. I can't imagine where our hero is going to wind up after he takes out that policy. The boy plans to murder the old fox but I think Carradine will beat him to it.

That last close-up was overdone. C'est tous!  Why did you indicate disbelief?
It sounds terrific. Will it be the 1st Symphony in the new theater?

I think the conductor is very famous.
If you want to, ok - but that won't help my situation.
I just want to burp. 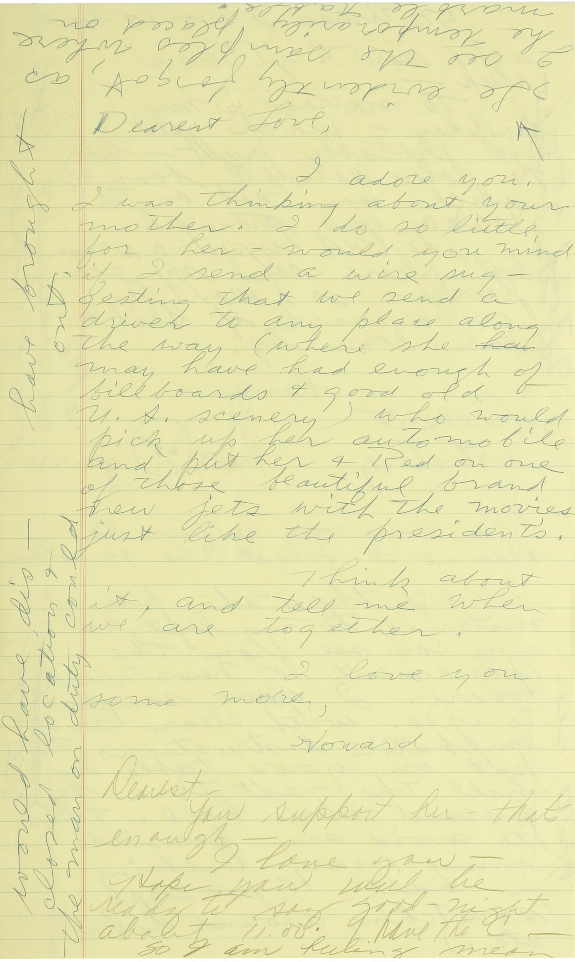 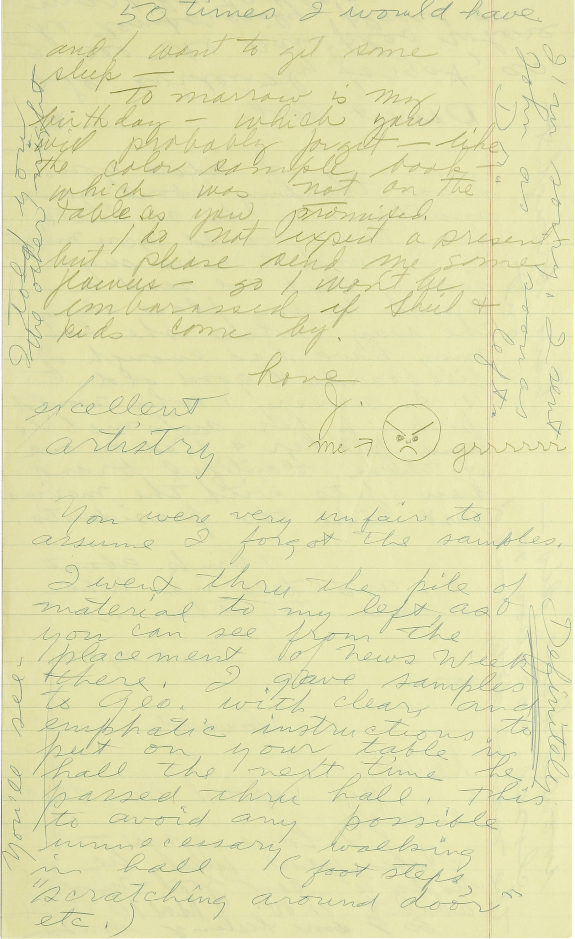 I adore you. I was thinking about your mother. I do so little for her - would you mind if I send a wire suggesting that we send a driver to any place along the way (where she may have had enough of billboards + good old U.S scenery) who would pick up her automobile and put her + Red on one of those beautiful brand new jets with the movies just like the president's.

Think about it, and tell me when we are together.

I love you some more,
Howard

You support her - that's enough —
I love you —
Hope you will be ready to say good-night about 11:00. I have the C —
So I am feeling mean and I want to get some sleep —
Tomorrow is my birthday - which you will probably forget - like the color sample book - which was not on the table as you promised.
I do not expect a present - but please send me some flowers - so I won't be embarassed if Shirl +  kids come by.

(Hughes)
You were very unfair to assume I forgot the samples. I went thru the pile of material to my left, as you can see from the placement of newsweek there. I gave samples to Geo. with clear and emphatic instructions to put on your table in hall the next time he passed thru hall. This to avoid any possible unnecessary walking in hall (footsteps, "scratching around door" etc.)

He evidently forgot, as I see the samples where he temporarily placed on marble table.

would have disclosed location + the man on duty could have brought out.

I told you the other night

50 times I would have

I'm sorry. I sent John as soon as Dr. left 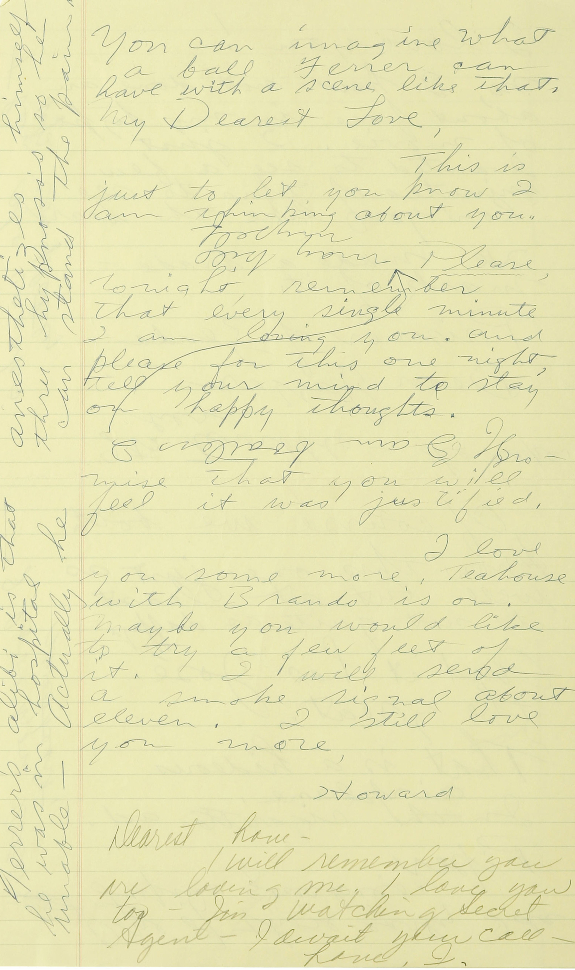 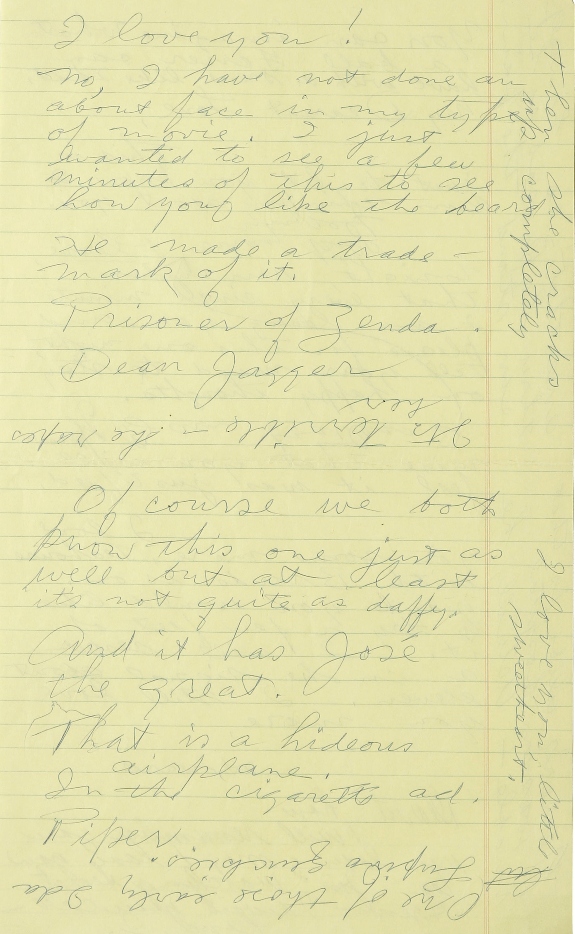 This is just to let you know I am thinking about you.

Please, tonight, remember that every single minute I am loving you and please for this one night, tell your mind to stay on happy thoughts. I promise that you will feel it was justified.

I love you some more. Teahouse with Brando is on. Maybe you would like to try a few feet of it. I will send a smoke signal about eleven. I still love you more.

I will remember you are loving me. I love you too - I'm watching Secret Agent - I await your call-

(Hughes)
If I am boatless I may kill myself.

Ferrer's alibi is that he was in hospital unable — actually he anesthetizes himself thru hypnosis so he can stand the pain.

you can imagine what a ball Ferrer can have with a scene like that.

No, I have not done an about face in my type of movie. I just wanted to see a few minutes of this to see how you like the beard.

He made a trademark of it.

Of course we both know this one just as
well but at least it's not quite as daffy.

And it has José the great.

That is a hideous airplane.
In the cigarette ad.

It's terrible - he rapes her

One of those early Ida Lupino quickies.

Then she cracks up completely