As mentioned in my previous post, Humphrey Bogart's road to fame came with his lead roles in High Sierra (1941) and The Maltese Falcon (1941). For both films, George Raft (at the time a major star at Warner Bros.) had been first choice. Raft, however, didn't think either film was interesting enough and refused both parts, inadvertently turning Bogie into a big star. These poor decisions would ultimately lead to the decline of Raft's career. 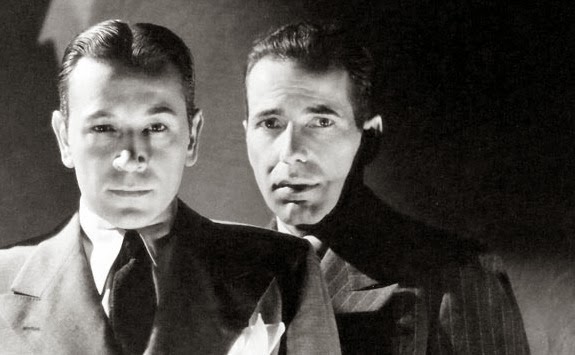 George Raft passed up The Maltese Falcon for a role in Raoul Walsh's Manpower (1941). As Raft's co-star, Bogart was cast. However, Raft refused to work with him, and Bogart was fired just after filming began (he was replaced by Edward G. Robinson). In hindsight not a bad thing for Bogie, since he was now free to play the lead in The Maltese Falcon (while Raft got stuck with Manpower, for which he got third-billing after Robinson and Marlene Dietrich).

The following telegram is another telegram from Humphrey Bogart to Hal Wallis, producer at Warner Bros.. In it, an upset Bogie complains about George Raft and his stand-in Mack Gray. The telegram is dated 6 March 1941 and was most likely sent during production of the above mentioned Manpower. Probably not long thereafter, Bogart was removed from the film. 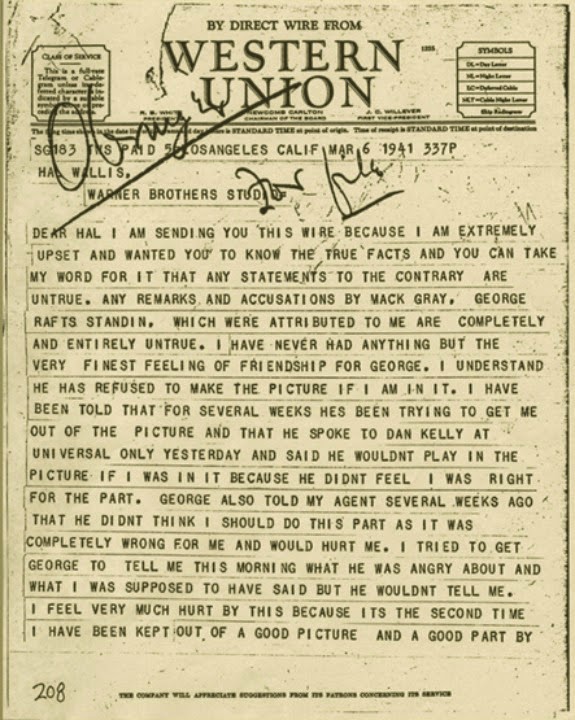 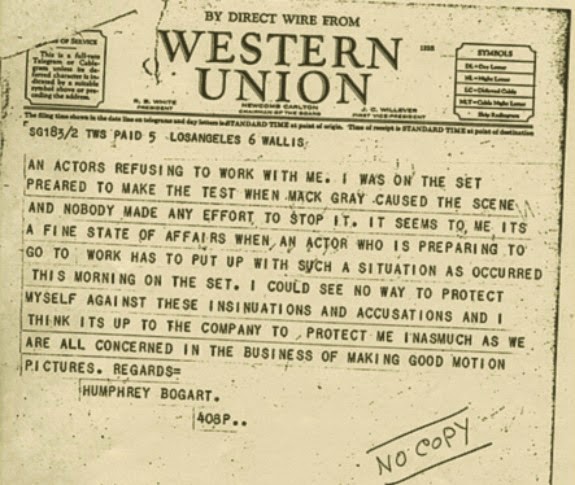 DEAR HAL I AM SENDING YOU THIS WIRE BECAUSE I AM EXTREMELY UPSET AND WANTED YOU TO KNOW THE TRUE FACTS AND YOU CAN TAKE MY WORD FOR IT THAT ANY STATEMENTS TO THE CONTRARY ARE UNTRUE. ANY REMARKS AND ACCUSATIONS BY MACK GRAY, GEORGE RAFTS STANDIN, WHICH WERE ATTRIBUTED TO ME ARE COMPLETELY AND ENTIRELY UNTRUE. I HAVE NEVER HAD ANYTHING BUT THE VERY FINEST FEELING OF FRIENDSHIP FOR GEORGE. I UNDERSTAND HE HAS REFUSED TO MAKE THE PICTURE IF I AM IN IT. I HAVE BEEN TOLD THAT FOR SEVERAL WEEKS HES BEEN TRYING TO GET ME OUT OF THE PICTURE AND THAT HE SPOKE TO DAN KELLY AT UNIVERSAL ONLY YESTERDAY AND SAID HE WOULDNT PLAY IN THE PICTURE IF I WAS IN IT BECAUSE HE DIDNT FEEL I WAS RIGHT FOR THE PART. GEORGE ALSO TOLD MY AGENT SEVERAL WEEKS AGO THAT HE DIDNT THINK I SHOULD DO THIS PART AS IT WAS COMPLETELY WRONG FOR ME AND WOULD HURT ME. I TRIED TO GET GEORGE TO TELL ME THIS MORNING WHAT HE WAS ANGRY ABOUT AND WHAT I WAS SUPPOSED TO HAVE SAID BUT HE WOULDNT TELL ME. I FEEL VERY MUCH HURT BY THIS BECAUSE ITS THE SECOND TIME I HAVE BEEN KEPT OUT OF A GOOD PICTURE AND A GOOD PART BY AN ACTORS REFUSING TO WORK WITH ME. I WAS ON THE SET PREARED [sic] TO MAKE THE TEST  WHEN MACK GRAY CAUSED THE SCENE AND NOBODY MADE AN EFFORT TO STOP IT. IT SEEMS TO ME ITS A FINE STATE OF AFFAIRS WHEN AN ACTOR WHO IS PREPARING TO GO TO WORK HAS TO PUT UP WITH SUCH A SITUATION AS OCCURRED THIS MORNING ON THE SET. I COULD SEE NO WAY TO PROTECT MYSELF AGAINST THESE INSINUATIONS AND ACCUSATIONS AND I THINK ITS UP TO THE COMPANY TO PROTECT ME INASMUCH AS WE ARE ALL CONCERNED IN THE BUSINESS OF MAKING GOOD MOTION PICTURES. REGARDS=