Now the bitch has all the riches

German novelist Erich Maria Remarque, who is best known for his 1929 bestselling novel All Quiet on the Western Front, had an affair with Marlene Dietrich which started in 1937 and lasted at least three years. Dietrich was married to Rudolf ("Rudi") Sieber —their marriage lasted from 1923 until Sieber's death in 1976— and at the time Remarque was married to his first wife Ilse Jutta Zambona, whom he eventually divorced in 1957. After their affair had ended, Remarque and Dietrich remained close friends, sharing a special bond for the rest of their lives. (They kept up a correspondence and a selection of their letters was published in the 2003 Sag Mir Dass Du Mich Liebst (Tell Me That You Love Me).)

When Dietrich first learned about Remarque being romantically involved with Paulette Goddard, she was shocked and appalled. Dietrich had felt contempt for Goddard ever since the actress had given her advice about men (which happened on a train ride to Hollywood sometime in the 1930s): "The only thing you have to always remember: Never, ever sleep with a man until he gives you a pure white stone of at least ten carats." Goddard not only loved diamonds but she also loved art and antiques, and Dietrich was convinced that when Goddard eventually married Remarque it was because of his money and his massive collection of impressionist paintings. It should be noted, incidentally, that Remarque had first proposed to Dietrich but when she refused he asked Goddard.
Remarque and Goddard tied the knot in 1958. Twelve years her senior, Remarque adored Goddard, loving her carefree attitude to life and her mind. (Writer Anita Loos, a longtime friend of the actress, said that Goddard was one of the most intelligent and most well-read people she knew.) In a marriage that lasted twelve years until Remarque's death in 1970, Goddard brought her husband emotional stability and made him feel the joy of life again. Remarque, in turn, gave his wife what she wanted, her needs mostly materialistic. "I think it was a happy marriage", said actress friend Luise Rainer who saw the couple often. "He could give her a lot of jewellery and that's what she loved. George Gershwin had once told me years before that Paulette was a little gold-digger, and I'm sure she was perfectly aware of Erich's money, his art collection, his beautiful house when she married him ... She was not very enthusiastic about his virility, but she certainly loved him."
Dietrich was certain, however, that Goddard had never loved Remarque. Four days after Remarque's death  —after many strokes he died of heart failure on 25 September 1970, aged 72— she wrote the following letter to her friend Scotty, among others talking about "that bitch Goddard". 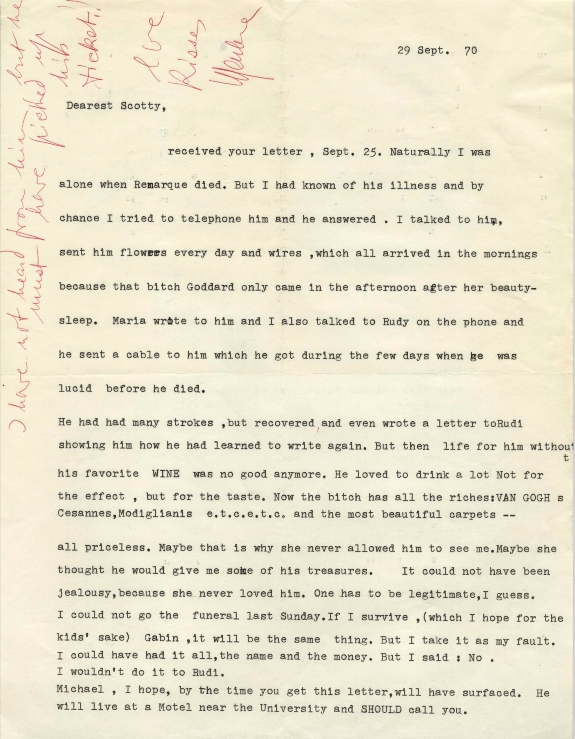 Source: Nate D. Sanders Auctions
transcript handwritten part:
I have not heard from him but he must have picked up his ticket!!
love kisses Marlene
Following Remarque's death, Goddard gradually sold her husband's collection of impressionist paintings, feeling that "the public should have access to such great paintings" and "tired of having them stored away in crates." A large part of the collection sold for $3 million at auction at Sotheby's in 1979. Remarque's original manuscripts of his work as well as his diaries and personal library were donated by Goddard to the New York University. While the actress may have been a "gold-digger" accumulating a lot of wealth during her lifetime, she also gave back. When she passed away in 1990, Goddard left more than $20 million to the same N.Y.U. for the establishment of scholarships and the development of educational and research programmes. In accordance with Goddard's wishes, in 1995 the N.Y.U. founded The Remarque Institute, in honour of the actress' late husband.
Posted by Clarissa Saunders
Tags: Erich Maria Remarque, Marlene Dietrich, Paulette Goddard