The Birds Is Coming!

In February 1963, six weeks before The Birds was due to open in New York, Alfred Hitchcock met with the publicity executives of Universal Pictures to announce the advertising slogan for his film. While The Birds was an independent Hitchcock production, it was distributed by Universal and also financially backed by the studio. In The Making of Hitchcock's The Birds (by Tony Lee Moral, 2013) Evan Hunter, who wrote the screenplay for the film, recalled the moment when Hitch made his announcement. After the director had revealed his catchy slogan —"The Birds is coming!"— a young Universal executive, puzzled by what he had heard, asked: "Excuse me, Mr Hitchcock, sir? Don't you mean "The Birds are coming", sir?"

No, Hitch had really meant "The Birds is coming". Technically, a grammatically correct phrase, The Birds being the title of the film, thus a singular subject taking a singular verb. However, like the Universal executive, a lot of people didn't see it that way. With billboards everywhere advertising "The Birds is coming", language lovers were appalled by what they considered a grave grammatical error and even sent letters to newspapers to express their indignation. In the end, Hitch's slogan and the commotion it caused gave the director exactly what he wanted — more publicity for his film with the interest of the general public piqued. (As Evan Hunter said: "It was pure genius, a seemingly ungrammatical catchphrase that combined humour and suspense.")

Apparently the slogan not only caught the attention of adults but also of children, including a group of school children in New York. On 5 March 1963, a Manhattan school class wrote a letter to Hitchcock (seen below), asking him to correct his error so children wouldn't learn incorrect English. 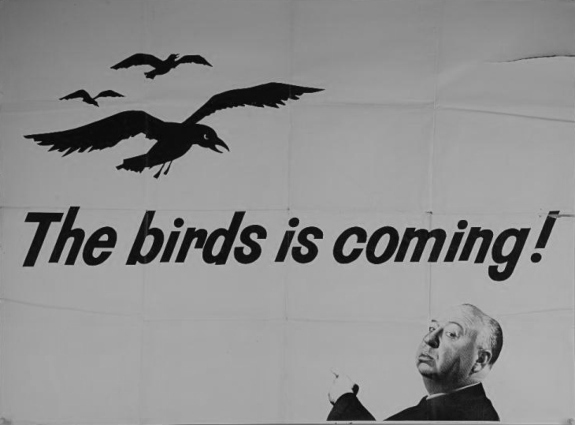 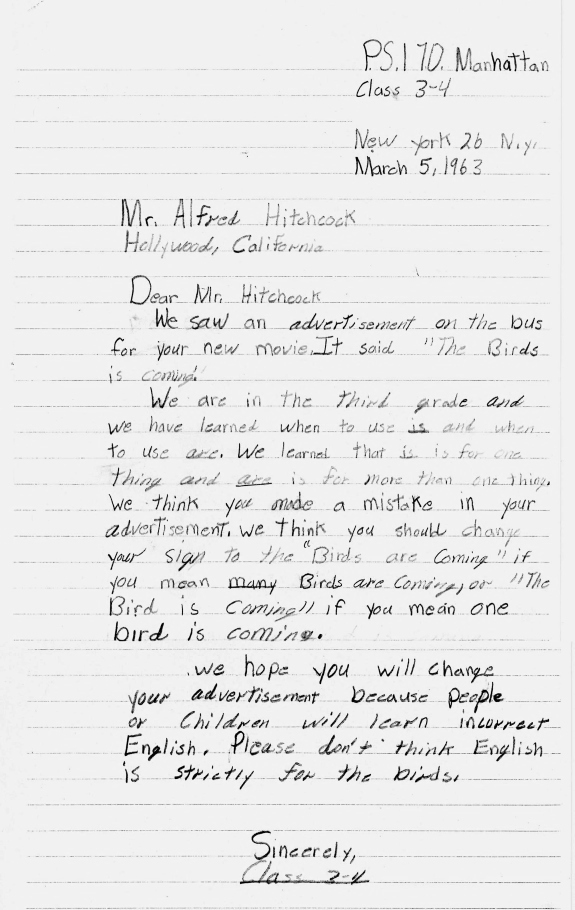 Source: oscars.org
Transcript:
P.S.170 Manhattan
Class 3-4
New York 26 N.Y.
March 5, 1963
Mr Alfred Hitchcock
Hollywood, California
Dear Mr. Hitchcock
We saw an advertisement on the bus for your new movie. It said "The Birds is coming".
We are in the third grade and we have learned when to use is and when to use are. We learned that is is for one thing and are is for more than one thing.
We think you made a mistake in your advertisement. We think you should change your sign to the "Birds are coming" if you mean many birds are coming, or "The Bird is coming" if you mean one bird is coming.
We hope you will change your advertisement because people or children will learn incorrect English. Please don't think English is strictly for the birds.
Sincerely,
Class 3-4 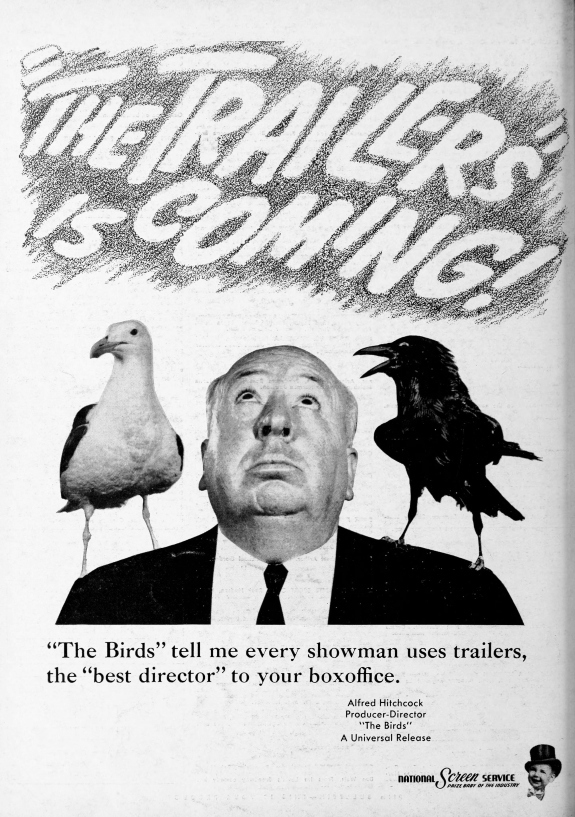 Email ThisBlogThis!Share to TwitterShare to FacebookShare to Pinterest
Tags: Alfred Hitchcock, The Birds