My wig ... I loathe the bloody thing

One of Errol Flynn's best and most successful films is the swashbuckler The Adventures of Robin Hood (1938), which is also one of my all-time personal favourites. To look the part of the legendary hero, Flynn was given the requisite costume (tights, tunic and hat), complete with medieval hairdo. The original wig was redesigned halfway through production after Flynn had complained about it in a letter to producer Hal Wallis. Flynn hated the centre part and bangs of the hairpiece and Wallis immediately had the wig improved. The reshooting of scenes was unnecessary, as the original wig had only been filmed under Flynn's hat.

Flynn's letter to Wallis can be read below. It was written on 24 October 1937, while on location in Chico, California, where the Sherwood scenes were filmed. 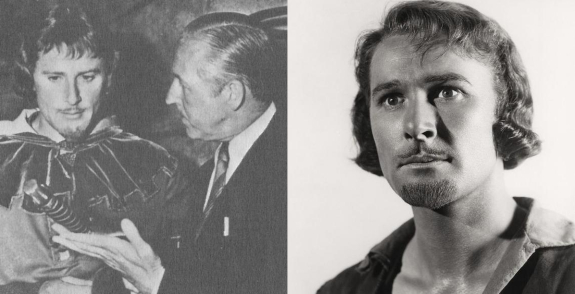 Richardson Springs
Chico, Cal
October 24, 1937
Dear Hal,
First let me thank you again for fixing things re the radio deals.
Now one other minor, but to me very important, squawk. My wig .... I loathe the bloody thing. With the hat on it's fine, and the alteration I want to suggest does not affect any of the stuff we've shot so far — the part that's wrong is hidden by the hat. The centre part in the wig is my chief complaint. I would like an almost unnoticeable part on either side so that one side or the other could sweep back off the forehead. The fringes would then, when the hat is removed, not look like fringes but just a few locks of loose hair carelessly falling over the brow. My drawing of course is hopeless but I've explained to the make up here who say they will write to the studio and explain it.
The point is, I haven't had my hat off yet and when I do, the new wig would match. Would you ask them to make me one like that described and send it up so we can get it right before we come down? I'm quite certain you will think it an improvement, Hal. If you don't — nothing has been lost. I hate this present one so much I shudder every time I see the Goddam thing — and I've had nothing but comments from people, when they see it with the hat off, about the stupid looking fringe and centre part. So there must be something to it.
I feel like one of the oldest inhabitants of Chico now — we all do. And we're all very sick of it but consoling ourselves with the report or rather rumour that you like the stuff down there. Is it so?
All the best Hal and kindest personal regards.
Errol