It shows that our industry has a warm heart

On 17 April 1961, Elizabeth Taylor received what is generally regarded as a Sympathy Oscar. After having been nominated in the Best Actress category for three consecutive years (i.e. for her performances in Raintree County (1957), Cat On a Hot Tin Roof (1958) and Suddenly, Last Summer (1959)), Elizabeth finally won the Oscar for her role in Butterfield 8 (1960).

The role of call-girl Gloria Wandrous in Butterfield was not a part Elizabeth had wanted to play. In fact, she hated it and she also hated the film. However, due to her contractual obligation to MGM, Elizabeth still owed the studio one more film before she was free to do Cleopatra (1963) for 20th Century-Fox. Butterfield was the film MGM wanted her to make, which she then did under protest. (When Butterfield became a box-office hit she famously said: "I still say it stinks".) 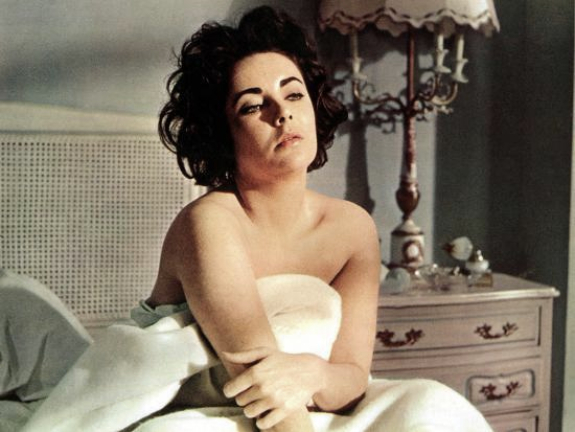 Elizabeth had not been a favourite to win the Oscar, but a few months prior to the ceremony she suddenly became very ill. While filming Cleopatra, she contracted double pneumonia and an emergency tracheotomy was performed to save her life. Thinking that Elizabeth had not survived, some newspapers already ran her obituary. (Joan Collins was standing by to take over Elizabeth's role as Cleopatra in case of her death.) The fact that Elizabeth almost died is considered by many the main reason why she ultimately won. Elizabeth herself later acknowledged that her Oscar win had indeed been a sympathy win: "The reason I got the Oscar was that I had come within a breath of dying of pneumonia only a few months before. Nevertheless, I was filled with gratitude when I got it, for it meant being considered an actress and not a moviestar. My eyes were wet and my throat awfully tight. Any of my three previous nominations was more deserving. I knew it was a sympathy award, but I was still proud to get it."

Greer Garson was one of Elizabeth's fellow nominees, being nominated for her role as Eleanor Roosevelt in Sunrise at Campobello. The rest of the nominees were Shirley MacLaine for The Apartment — considered a favourite to win the Oscar, MacLaine would later quip: "I lost to a tracheotomy"—, Deborah Kerr for The Sundowners and Melina Mercouri for Never on Sunday. A month after the Oscar ceremony was held, Garson wrote the following letter to Ted Ashton, unit publicist at Warner Bros., in which she gave her opinion on Elizabeth's "sentimental" Oscar win.

Incidentally, Greer had won the Golden Globe for her portrayal of Mrs. Roosevelt a month earlier, beating Elizabeth who was also nominated. 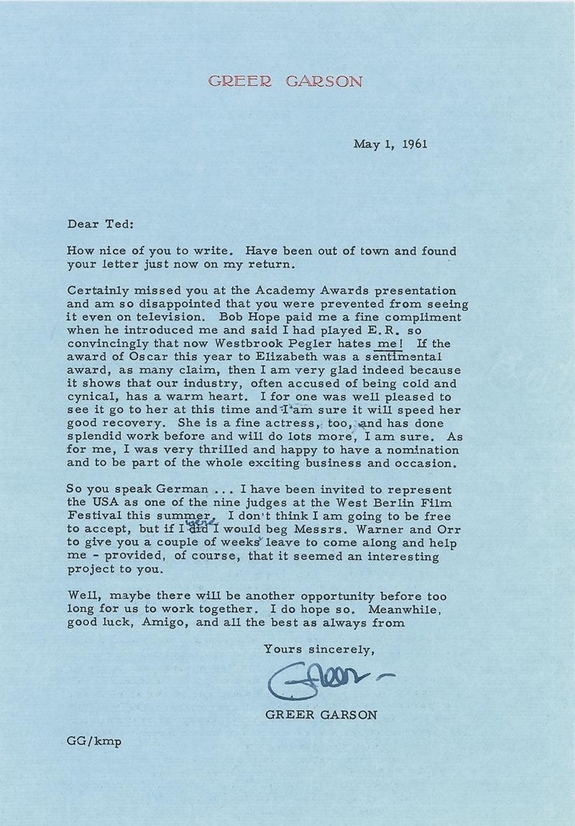 How nice of you to write. Have been out of town and found your letter just now on my return.

Certainly missed you at the Academy Awards presentation and am so disappointed that you were prevented from seeing it even on television. Bob Hope paid me a fine compliment when he introduced me and said I had played E.R. so convincingly that now Westbrook Pegler [journalist who had a feud with Mrs. Roosevelt] hates me! If the award of Oscar this year to Elizabeth was a sentimental award, as many claim, then I am very glad indeed because it shows that our industry, often accused of being cold and cynical, has a warm heart. I for one was well pleased to see it go to her at this time and I am sure it will speed her good recovery. She is a fine actress, too, and has done splendid work before and will do lots more, I am sure. As for me, I was thrilled and very happy to have a nomination and to be part of the whole exciting business and occasion.

So you speak German... I have been invited to represent the USA as one of the nine judges at the West Berlin Film Festival this summer. I don't think I am going to be free to accept, but if I were I would beg Messrs. Warner and Orr to give you a couple of weeks leave to come along and help me - provided, of course, that it seemed an interesting project to you.

Well, maybe there will be another opportunity before too long for us to work together. I do hope so. Meanwhile, good luck, Amigo, and all the best as always from

-Go here to watch a still weak Elizabeth Taylor receive her Oscar.
-Go here to watch the ever elegant Greer Garson present the Best Actor Oscar after being introduced by Bob Hope (as mentioned in her letter).