I must have mentioned once or twice before that Olivia de Havilland and Errol Flynn were more or less responsible for my becoming a classic Hollywood fan. At a young age (I think I was around ten years old), seeing them together in Captain Blood (1935), The Adventures of Robin Hood (1938) and Dodge City (1939), I fell in love with them, Errol becoming my hero and Olivia my heroine. When I grew older I had other heroes, but Olivia (and Errol too, of course) always held a special place in my cinematic heart. It is therefore with great sadness that I heard of Olivia's passing last Sunday. She died peacefully in her sleep at her Paris home at the incredible age of 104. 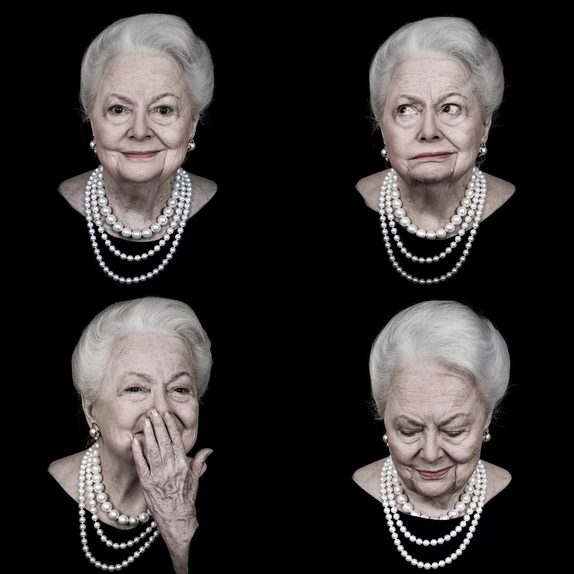 The films of Olivia that I saw as a child and loved (and still do!) were not the films she herself was most proud of. Olivia was very unhappy with her career by the time she made Dodge City ("I was in such a depressed state that I could hardly remember the lines") and was quite eager to take on more challenging roles. She would soon get her wish when David Selznick cast her in the role of Melanie Hamilton in Gone with the Wind (1939), for which she received her first Oscar nomination. There were more challenging, dramatic roles still to come with films like Hold Back The Dawn (1941), To Each His Own (1946), The Snake Pit (1948) and The Heiress (1949), earning her a further four Oscar nominations. Olivia eventually won the statuette twice, for her performances in To Each His Own and The Heiress.

Among Olivia's dramatic roles, probably the most demanding was that of schizophrenic Virginia Cunningham in Anatole Litvak's The Snake Pit — the role often cited as one of her personal favourites. To prepare for her role, Olivia did extensive research, visiting mental hospitals and observing treatments, such as hydrotherapy and electric shock. Furthermore, she attended therapy sessions and also spent time with patients at social functions. Olivia's hard work eventually paid off, earning her good reviews, an Oscar nomination ánd praise from people in the psychiatric field. 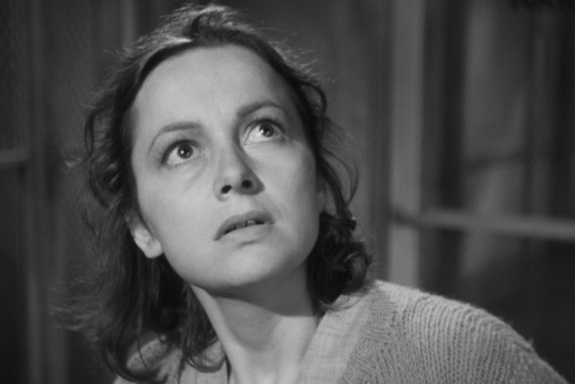 One of the professionals who was very impressed with The Snake Pit and Olivia's portrayal of Virginia was Dr. William Menninger, a renowned psychiatrist and after WWII a leader in reforming state mental hospitals. Here is a correspondence between him and Olivia from March 1949, several months after the release of the film. As one can imagine, Olivia was "tremendously thrilled" to receive Dr. Menninger's praise and approval. 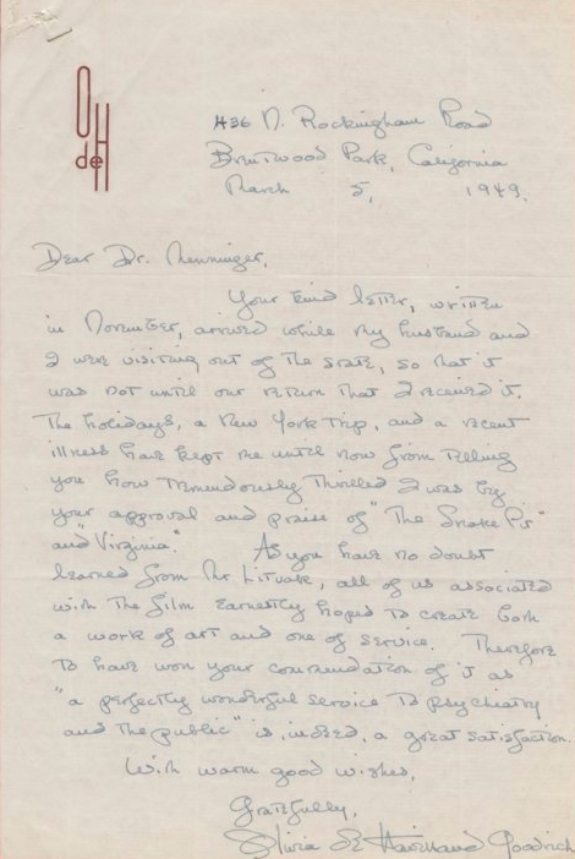 Your kind letter, written in November, arrived while my husband and I were visiting out of the state, so that it was not until our return that I received it. The holidays, a New York trip, and a recent illness have kept me until now from telling you how tremendously thrilled I was by your approval and praise of "The Snake Pit" and "Virginia". As you have no doubt learned from Mr. Litvak, all of us associated with the film earnestly hoped to create both a work of art and one of service. Therefore to have won your commendation of it as "a perfectly wonderful service to psychiatry and the public" is, indeed, a great satisfaction. 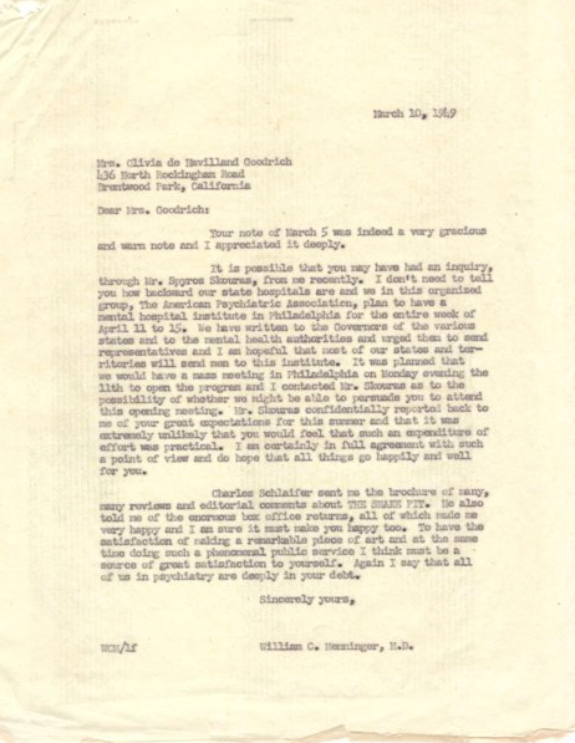 Your note of March 5 was indeed a very gracious and warm note and I appreciated it deeply.

It is possible that you may have had an inquiry, through Mr. Spyros Skouras [President of 20th Century Fox], from me recently.  I don't need to tell you how backward our state hospitals are and we in this organized group, The American Psychiatric Association, plan to have a mental hospital institute in Philadelphia for the entire week of April 11 to 15. We have written to the Governors of the various states and to the mental health authorities and urged them to send representatives and I am hopeful that most of our states and territories will send men to this institute. It was planned that we would have a mass meeting in Philadelphia on Monday evening the 11th to open the program and I contacted Mr. Skouras as to the possibility of whether we might be able to persuade you to attend this opening meeting. Mr. Skouras confidentially reported back to me of your great expectations for this summer and that it was extremely unlikely that you would feel that such an expenditure of effort was practical. I am certainly in full agreement with such a point of view and do hope that all things go happily and well for you.

Charles Schlaifer sent me the brochure of many, many reviews and editorial comments about THE SNAKE PIT. He also told me of the enormous box-office returns, all of which made me very happy and I am sure it must make you happy too. To have the satisfaction of making a remarkable piece of art and at the same time doing such a phenomenal public service I think must be a source of great satisfaction to yourself. Again I say that all of us in psychiatry are deeply in your debt.