Don't worry, everything will be Jake

John Barrymore fell instantly in love with Dolores Costello after she had been cast as his co-star in The Sea Beast (1926). Still married to his second wife Blanche Oelrichs, Barrymore started an affair with Costello which eventually led to their marriage in November 1928. Barrymore and Costello had two children, daughter Dolores in 1930 and son John Drew in 1932. (With Oelrichs Barrymore also had a daughter, Diana, born in 1921.) 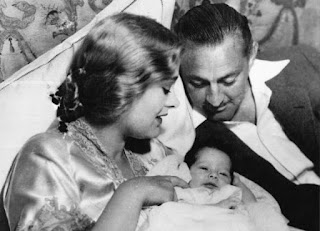 By 1934, the marriage was in serious trouble, mainly because of Barrymore's excessive drinking. Barrymore, addicted to alcohol since the age of fourteen, had been drinking continuously for two years (according to Costello) and began to experience several alcohol-related health issues, both physical and mental. Afraid that his wife was going to declare him mentally incompetent, Barrymore left Los Angeles in the fall of 1934, travelling to England to work and afterwards spending time in India. He came back to the US at the end of January 1935, not returning to Costello in LA but settling in New York instead. There, a month later, Barrymore fell ill and was admitted to a hospital where he was visited by a 19-year-old fan, Elaine Jacobs. The two became friends and started a much-publicised relationship. Jacobs (later Barrie) eventually became Barrymore's fourth and last wife.

Dolores Costello filed for divorce on grounds of "cruelty and habitual intemperance" in May 1935, demanding custody of the children and financial support. Later that year, in October, Costello filed a new suit, dropping the original charge of cruelty while accusing Barrymore only of desertion. The divorce was a bitter financial fight, nevertheless Costello said in a later interview: "Whenever I think of John, it is with great compassion".

While Costello is said to have initiated the divorce proceedings, a letter from John Barrymore (as seen below) indicates that he had asked her for a divorce several months before she officially filed for it. The letter, written on 8 February 1935, is quite respectful and courteous, with Barrymore asking Costello for a quick settlement of the legal matters "in as friendly a fashion as possible". The divorce between Barrymore and Costello was ultimately finalised in October 1936. 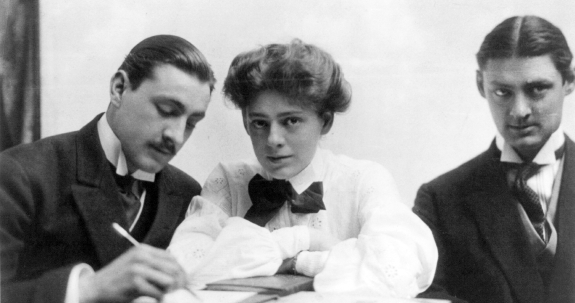 The day after he had written to his wife, John Barrymore also wrote a letter to his four-year-older brother Lionel, this letter obviously quite different in tone. From what I've read online, John adored and was very much in awe of his big brother. (Later Lionel would dismiss this as nonsense: "He was awed by only one person in the world, the same person who awed me: Ethel.") It seems only natural that John would discuss his impending divorce with Lionel, although he didn't really say much about it in the letter, feeling his brother could supply most of it himself. In any case Lionel was not to worry, said John, assuring him that everything would be fine. 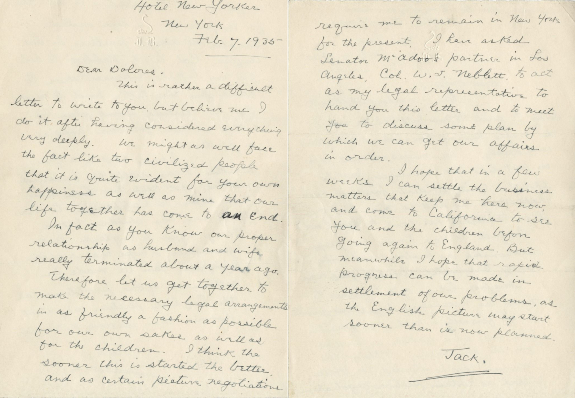 This is rather a difficult letter to write to you but believe me I do it after having considered everything very deeply. We might as well face the fact like two civilized people that it is quite evident for your own happiness as well as mine that our life together has come to an end. In fact as you know our proper relationship as husband and wife really terminated about a year ago. Therefore let us get together to make the necessary legal arrangements in as friendly a fashion as possible for our own sakes as well as for the children. I think the sooner this is started the better, and as certain picture negotations require me to remain in New York for the present I have asked Senator McAdoo's partner in Los Angeles, Col. W. H. Neblett, to act as my legal representative to hand you this letter and to meet you to discuss some plan by which we can get our affairs in order.

I hope that in a few weeks I can settle the business matters that keep me here now, and come to California to see you and the children before going again to England. But meanwhile I hope that rapid progress can be made in settlement of our problems, as the English picture may start sooner than is now planned. 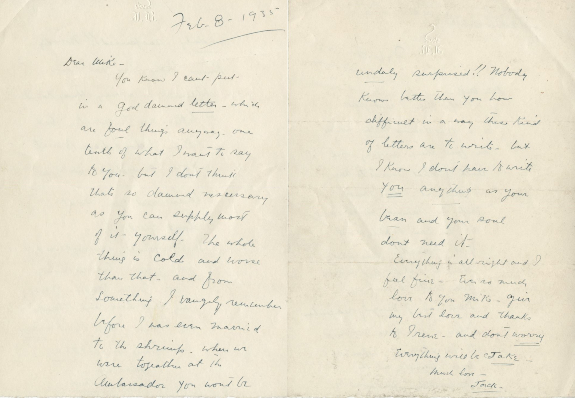 You know I can't put in a god damned letter, which are foul things anyway, one tenth of what I want to say to you, but I don't think that's so damned necessary as you can supply most of it yourself. The whole thing is cold, and worse than that, and from something I vaugely [sic] remember before I was even married to the shrimp. When we were together at the Ambassador you won't be unduly surprised!! Nobody knows better than you how difficult in a way these kind of letters are to write, but I know I don't have to write you anything as your bean and your soul don't need it.

Everything is all right and I feel fine. Ever so much love to you Mike. Give my best love and thanks to Irene*-  and don't worry
Everything will be Jake.
Much love
Jack


*Note
Irene Fenwick was Lionel's wife from 1923 until her early death in 1936. Before she became involved with Lionel, Irene had dated John. Lionel's marriage to Irene caused a rift between the brothers who didn't speak to each other for a few years. When Irene died of anorexia at age 49, John was a big support to Lionel taking over his role of Scrooge on the radio.