My contract is ridiculous

During Hollywood's studio system, Bette Davis was one of the first actors to openly challenge her contract. After winning the Oscar for her performance in Dangerous (1935), Bette felt entitled to better pay, better roles and more vacation time (among others). Her studio Warner Bros., however, refused to give her what she wanted. When Bette in turn refused to play in a film that Warners offered her (i.e. God's Country and the Woman (1937)) she was suspended without pay.


Defying her contract with Warners, Bette took off for England to make two films with an independent production company. In September 1936, she was sued by Warners for breach of contract. Warners won the case and Bette, in debt with no income, had to return to Hollywood to work. Despite losing the lawsuit, Bette did get better roles starting with Marked Woman (1937). The most successful period of her career soon followed with the lead in Jezebel (1938) for which she won her second Oscar. After that she starred in Dark Victory, Juarez, The Old Maid and The Private Lives of Elizabeth and Essex— all released in 1939 and all box-office hits. Bette had now become the studio's most profitable star and was even dubbed "The Fifth Warner Brother". 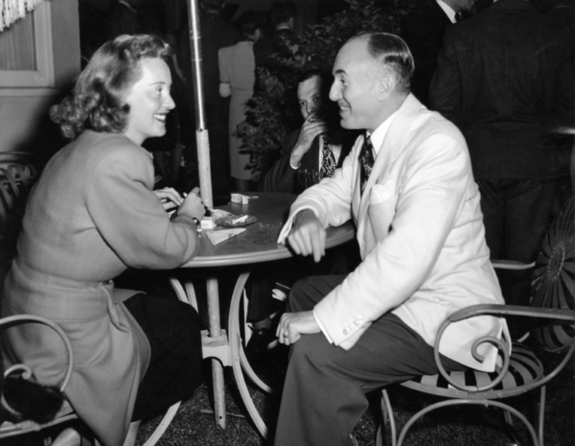 During her employment with Warner Bros. (1932-1949), Bette wrote several letters to her boss Jack Warner showing her dissatisfaction with her contract— two of these letters are seen below.

First up is a letter from June 1936.  Bette had received her Oscar for Dangerous earlier that year on 5 March and wrote to Warner asking for several privileges concerning her contract. As said before, Bette did not get what she wanted and subsequently left for England.

In reference to our talk today—it seemed to me our main problem is getting together on the money. You as Head of your firm, naturally know what your concern can afford and what they can't.

I have no desire to be "off your list" and I feel sure—you do not wish it either. I agree lots of harm can be done thru publicity. Believe me when I tell you I have thought and prepared for every angle of this for a long time now. I also know you have the right to keep me from working—a great unhappiness to me because I enjoy working—especially after my long vacation. I am so rested it hurts! However, there comes a time in everyone's career when certain things make working worth-while. I am now referring to the very few rights I have asked for—when I saw you in your office the other day you assured me you would do all the things I wanted anyway with the exception of the loan-out [to other studios], so it is hard for me to understand why you object to putting it in writing. Five years is a long time—anything can happen—so you must see my side of it—protection. You can't blame anyone for protecting themselves. If I am worth anything to you at all—you can't mind letting me know it in writing—if I'm not this letter is in vain.

As to the "loan-out clause", I am the kind of a person who thrives under change. I have never wanted this clause because I wanted to feel I was my own boss—have authority of my own—quite the contrary. I like a boss—someone to look up to whose opinion I respect as I do yours. Mentally—a change does me good—makes me do better work, I like working with new directors, new casts, etc. I also am ambitious to become known as a great actress—I might, who can tell. Every once in a while a part comes along peculiarly suited to me. I want to feel, should a role come my way, I am at liberty to take advantage of it. If no such part ever appears in five years, then I will not take advantage of my right. In that case I am very anxious to travel, thus the request for three consecutive months vacation. Travel is also change—good publicity for you and me both and particularly important to me during the next five years as I have never been out of this country—it is broadening to one's intellect and will help me I'm sure in my work and thus help you. I am an essentially high-strung person—for that reason—change means rest and I must have rest.

To get back to our call and the purpose of this letter, I would be willing to take less money, if in consideration of this, you would give me my "rights." You have asked me to be level headed in this matter. I feel I am extremely and I hope you can agree that I am. I am more than anxious to work for you again, but not as things stand. I really would be unable to do justice to my work at all—as I would feel I was coming back—not entitled to the things I sincerely believe I deserve.

As a happy person, I can work like Hell—as an unhappy one, I make myself and everyone around me unhappy. Also I know and you do too—in a business where you have a fickle public to depend on, the money should be made when you mean something, not when the public has had time to tell you to "go to hell"...

[Despite Bette's wish to be loaned out to other studios, during her time at Warners she was loaned out only twice, i.e. to RKO for Of Human Bondage (1934) and to Samuel Goldwyn for The Little Foxes (1941).]

The second letter is from September 1939. Having made five films in twelve months, Bette was exhausted and demanded a new contract limiting her pictures to two per year "with a possible third if all conditions [were] favorable". She refused to do the film 'Til We Meet Again (1940) that was offered to her next—the part went to Merle Oberon— and took an extended vacation in her native New England. Bette wouldn't return to work until January 1940, her next film being All This, and Heaven Too (1940).

Have just finished talking to Hal [Wallis, head of production at Warners]. I must explain one thing—for the first time in my life I don't care whether I ever make another picture or not. I am that overworked. I have given you a lot of honest effort in the past eight years. The time has come when I feel I have earned some privileges in writing. These I must have.

My contract is ridiculous. I have no protection whatsoever. I must have limited pictures —I must have time off between. I think two [per year] is all I should make with a possible third if all conditions are favorable. The Wood Bros. [managers] know all the conditions— and were given to understand some weeks ago that you were willing to write a contract for me that would not be very far from what I wanted.

It is up to you. I am very serious about all this because I must be for my own good. If necessary I am even willing to stand the gaff of unemployment. Health is one thing that can't be manufactured. I am very serious about mine— and willing to go to any length to protect it. And staying in Hollywood working almost forty weeks of the year does not make sense—from your standpoint—box office can be ruined by too many pictures—as you well know.

Would appreciate your not communicating with me—it upsets me very much. I must be allowed to completely forget business...

Also arguing with me is no use—nor do I want to come back until it is settled.