Lucille Ball's brush with the blacklist 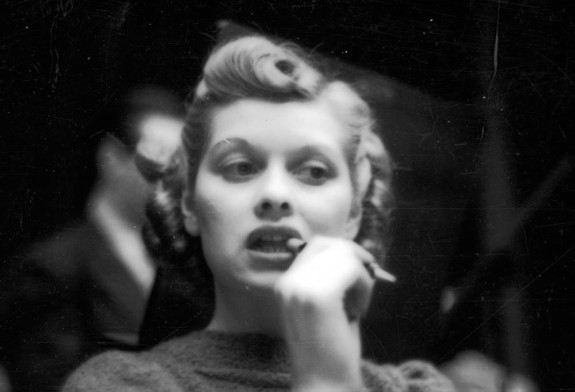 In the early 1950's, Lucille Ball was under investigation by the HUAC, the notorious committee that investigated Communism in Hollywood. The evidence against her consisted, among others, of a 1936 affidavit of registration saying she would vote for the Communist Party, an affidavit revealing she had been a delegate of the State Committee of the Communist Party, her membership of the Committee for the First Amendment and the fact that a communist meeting was held at her home in 1937 (although Ball herself had not been present). With all the evidence against her, Ball was questioned by the HUAC during secret meetings in April 1952 and September 1953. Regarding the 1936 affidavit, Ball said that she had only registered to please her grandfather Fred Hunt, a life-long socialist. The other accusations she denied too, firmly stating that she was no communist and had no ties with the Communist Party. 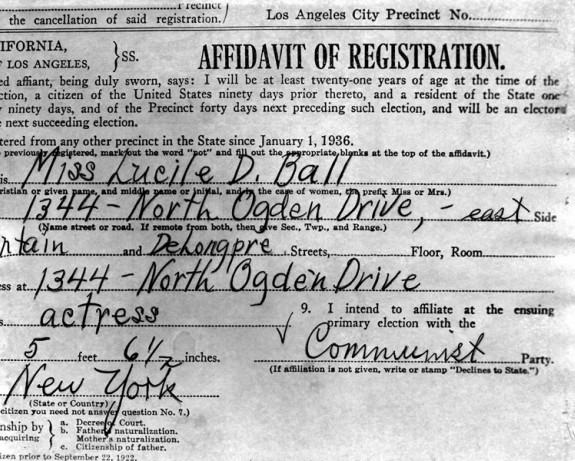 A few days after Ball's second HUAC interview, well-known radio commentator Walter Winchell made the accusations against Ball public. At the time, Ball's television show I Love Lucy (launched in 1951) was extremely popular, with very high ratings and sponsor Philip Morris having invested $8 million in the show. Despite the considerable evidence against Ball, fans stood by her as did her sponsor, and even FBI director J. Edgar Hoover (a big fan of the show) supported her.

It is generally believed that the show's huge popularity played a decisive role in determining Ball's fate. While a lot of Ball's fellow actors, screenwriters etc. got blacklisted, Ball herself was cleared of the charges. The HUAC accepted her story about her grandfather as well as her explanation regarding the other accusations. In the end, the HUAC investigation had done nothing to dent Ball's popularity. On the contrary-- Ball was more popular than ever, about 50 million people tuned in each week to watch her show. Ball would later acknowledge that she had been very lucky. If the HUAC affair had happened several years earlier, it might have very well ruined her career.


While Lucille Ball enjoyed the support from the majority of the American public, there were also those who didn't believe her explanations. The letters below, written by two angry US citizens to resp. radio commentator Walter Winchell and FBI director J. Edgar Hoover, show just that. The first letter was written in September 1953 and the second letter in December 1955, long after Ball had already been cleared.

Apart from the letters, also seen below is a FBI document regarding Ball's 1953 testimony before the HUAC. The document shows what Ball had to say in her defense against the accusations. (For the full text of Ball's testimony, click here.) 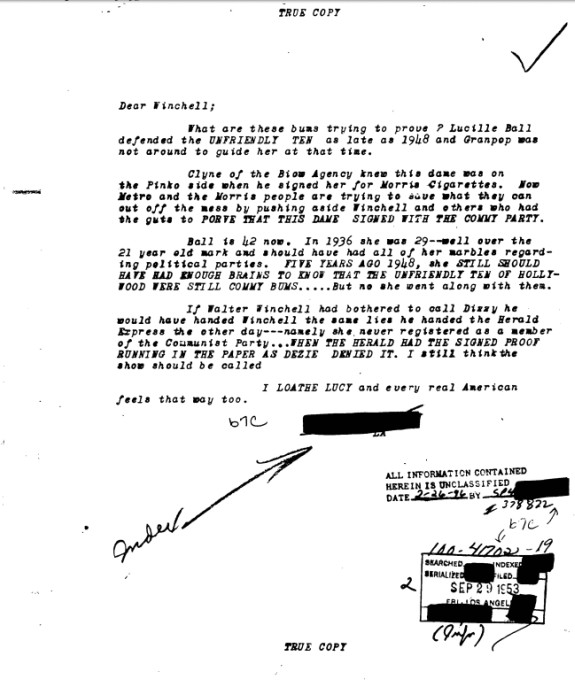 What are these bums trying to prove? Lucille Ball defended the UNFRIENDLY TEN as late as 1948 and Granpop was not around to guide her at that time.

Clyne of the Blow Agency knew this dame was on the Pinko side when he signed her for Morris Cigarettes. Now Metro and the Morris people are trying to save what they can out off the mess by pushing aside Winchell and others who had the guts to PORVE [sic] THAT THIS DAME SIGNED WITH THE COMMY PARTY.

Ball is 42 now. In 1936 she was 29-- well over the 21 year old mark and should have had all of her marbles regarding political parties. FIVE YEARS AGO 1948, she STILL SHOULD HAVE HAD ENOUGH BRAINS TO KNOW THAT THE UNFRIENDLY TEN OF HOLLYWOOD WERE STILL COMMY BUMS..... But no she went along with them.

If Walter Winchell had bothered to call Dizzy [Desi Arnaz] he would have handed Winchell the same lies he handed the Herald Express the other day---- namely she never registered as a member of the Communist Party.... WHEN THE HERALD HAD THE SIGNED PROOF RUNNING IN THE PAPER AS DEZIE DENIED IT. I still think the show should be called I LOATHE LUCY and every real American feels that way too. 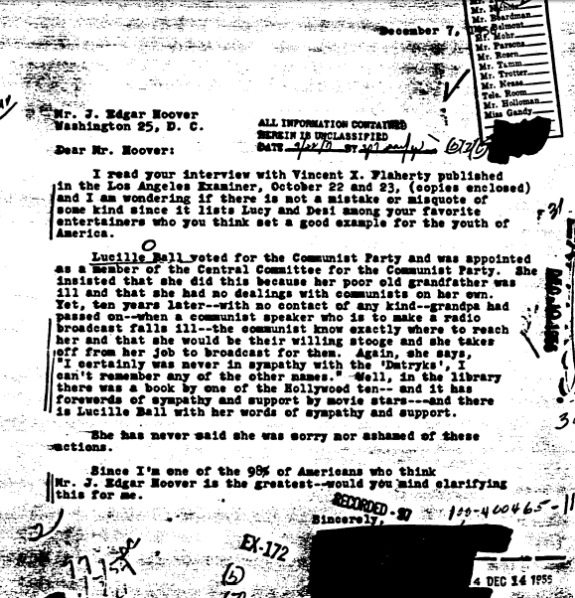 I read your interview with Vincent X. Flaherty published in the Los Angeles Examiner, October 22 and 23, (copies enclosed) and I am wondering if there is not a mistake or misquote of some kind since it lists Lucy and Desi among your favorite entertainers who you think set a good example for the youth of America.

Lucille Ball voted for the Communist Party and was appointed as a member of the Central Committee for the Communist Party. She insisted that she did this because her poor old grandfather was ill and that she had no dealings with communists on her own. Yet, ten years later-- with no contact of any kind-- grandpa had passed on-- when a communist speaker who is to make a radio broadcast falls ill-- the communist know exactly where to reach her and that she would be their willing stooge and she takes off from her job to broadcast for them. Again, she says, "I certainly was never in sympathy with the ' Dmytrks', I can't remember any of the other names." Well, in the library there was a book by one of the Hollywood ten-- and it has forewords of sympathy and support by movie stars-- and there is Lucille Ball with her words of sympathy and support.

She has never said she was sorry nor ashamed of these actions.

Since I'm one of the 98% of Americans who think Mr. J. Edgar Hoover is the greatest-- would you mind clarifying this for me. 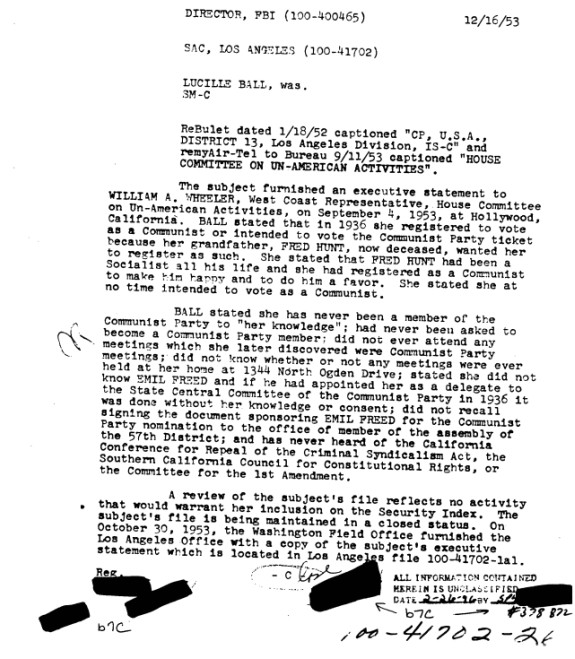 The subject furnished an executive statement to WILLIAM A. WHEELER, West Coast Representative, House Committee on Un-American Activities, on September 4, 1953, at Hollywood, California. BALL stated that in 1936 she registered to vote as a Communist or intended to vote the Communist Party ticket because her grandfather, FRED HUNT, now deceased, wanted her to register as such.  She stated that FRED HUNT had been a Socialist all his life and she had registered as a Communist to make him happy and to do him a favor. She stated she at no time intended to vote as a Communist.

BALL stated she has never been a member of the Communist Party to "her knowledge"; had never been asked to become a Communist Party member; did not ever attend any meetings which she later discovered were Communist Party meetings;  did not know whether or not any meetings were ever held at her home at 1344 North Ogden Drive;  stated she did not know EMIL FREED and if he had appointed her as a delegate to the State Central Committee of the Communist Party in 1936 it was done without her knowledge or consent; did not recall signing the document sponsoring EMIL FREED for the Communist Party nomination to the office of member of the assembly of the 57th District; and has never heard of the California Conference for Repeal of the Criminal Syndicalism Act, the Southern California Council for Constitutional Rights, or the Committee for the 1st Amendment.

Source of all documents: vault.fbi.gov

This post is my contribution to CMBA's Fall Blogathon Banned and Blacklisted. For a list of all the other entries, please click here.
Posted by Clarissa Saunders
Tags: HUAC, Lucille Ball