I have been stupidly loyal 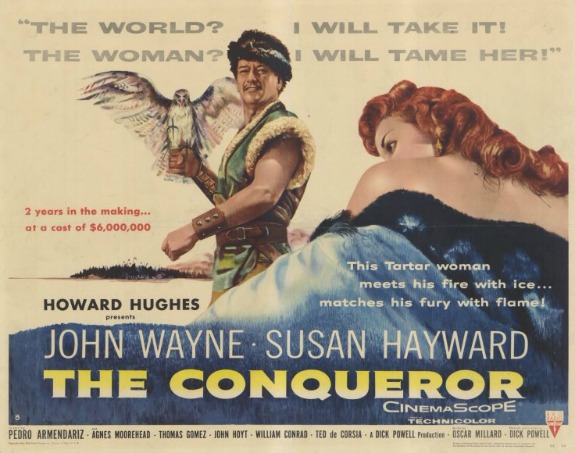 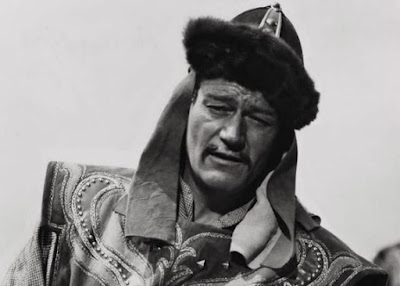 In the early 1950s, John Wayne made the worst decision of his film career. He decided to play the role of the Mongol warlord Genghis Khan in Howard Hughes' production The Conqueror (1956), a decision he would sorely regret. Wayne's casting as Khan is generally considered one of the worst miscastings ever --Wayne later agreed that he had been terribly miscast-- and the film itself also ranks as one of the worst films of all time.

Nevertheless, The Conqueror was a film Wayne had wanted to make and producer Howard Hughes had been willing to give him whatever he wanted. (At the time, Wayne was at the peak of his career and still had to make one more film as part of a three-picture deal with Hughes' studio RKO.) In mid-May 1954, filming on The Conqueror began and ended in early August. Production was not without problems and eventually cost RKO 6 million dollars, making The Conqueror the studio's most expensive production. Despite the huge investment, the film eventually became both a commercial and critical flop.

On 29 April 1954, a disgruntled John Wayne wrote the following letter to Howard Hughes. Apparently Wayne had been waiting for two and half years to do his last film for RKO and he complains about the money he lost for holding himself available and how he had turned down "four very top pictures". Wayne also mentions his friendship with Hughes, feeling that he had been taken advantage of ("I have been stupidly loyal"). Production on The Conqueror finally began a few weeks after Wayne had written his letter to Hughes. As said, the film turned out to be a big disaster and Wayne would regret playing Genghis Khan for the rest of his life. (Wayne reportedly said that the moral of the film was "not to make an ass of yourself trying to play parts you're not suited for.") 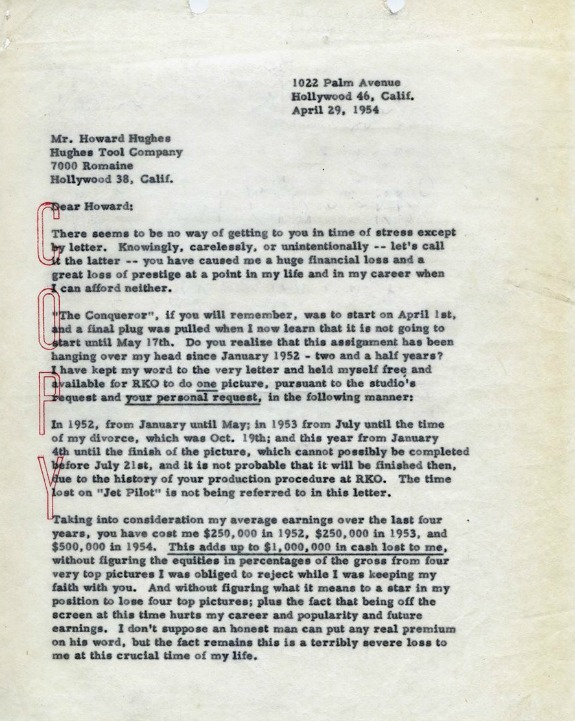 There seems to be no way of getting to you in time of stress except by letter. Knowingly, carelessly, or unintentionally --let's call it the latter-- you have caused me a huge financial loss and a great loss of prestige at a point in my life and in my career when I can afford neither.

"The Conqueror", if you will remember, was to start on April 1st, and a final plug was pulled when I now learn that it is not going to start until May 17th. Do you realize that this assignment has been hanging over my head since January 1952 -two and a half years?  I have kept my word to the very letter and held myself free and available for RKO to do one picture, pursuant to the studio' s request and your personal request, in the following manner:

In 1952, from January until May; in 1953 from July until the time of my divorce, which was October 19th; and this year from January 4th until the finish of the picture, which cannot possibly be completed before July 21st, and it is not probable that it will be finished then, due to the history of your production procedure at RKO.  The time lost on "Jet Pilot" is not being referred to in this letter. 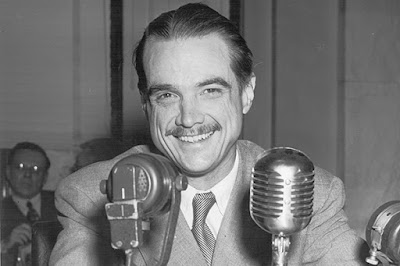 Taking into consideration my average earnings over the last four years, you have cost me $250,000 in 1952, $250,000 in 1953, and $500,000 in 1954. This adds up to $1,000,000 in cash lost to me, without figuring the equities in percentages of the gross from four very top pictures I was obliged to reject while I was keeping my faith with you. And without figuring what it means to a star in my position to lose four top pictures; plus the fact that being off the screen at this time hurts my career and popularity and future earnings. I don't suppose an honest man can put any real premium on his word, but the fact remains this is a terribly severe loss to me at this crucial time of my life.

As you can see by these cold facts, I have never taken advantage of any friendship between us. As a matter of fact, I have been stupidly loyal. I hate to refer to this, but you made a statement to me that I was one of the few friends you had in the motion picture business. I feel that I have been tremendously imposed upon.

The above are facts that Mr. Tevlin can readily verify. If you had taken the trouble to read my letter of February 3rd, which resulted in a meeting about the middle of February, you would have a better understanding of my problems. In that meeting you cut through issues that were vital to me in a manner only you are capable of doing, and reached a surface conclusion without the slightest understanding of all the facts.

It's true, I admit, that you did one thing: you listened to me and changed the picture from "The Long Wire" to "The Conqueror". I don't want you to say that this was done merely for my good-- it was more for your good.

Therefore, realizing that your mind is obviously on more important matters than the production of motion pictures, I would like to suggest that, in order to avoid a lot of exploded tempers, you authorize Mr. Tevlin to sit down with Mr. Marin and myself, immediately and prior to the tests scheduled for Tuesday of next week, and discuss a re-adjustment of my financial return from this picture. $100,000 does not even start to make the necessary adjustment.

Images of the letter via icollector.


Notes
-Apart from being a cinematic and financial disaster, The Conqueror was also a disaster in a different, more horrific way. A year before production started, tests with nuclear weapons had been executed at 137 miles (220 km) from the film location (the Utah desert). During the whole production which lasted almost three months, the cast and film crew were exposed to radioactive fallout, even though the site had been deemed safe. By 1980, 91 of the 220 cast and crew members had some form of cancer and 46 had already died of it, including John Wayne, Susan Hayward, Agnes Moorehead and director Dick Powell. Although it was never conclusively proven that the nuclear tests were the cause of the cancer cases, an expert stated in 1980 that in a group of 220 you would expect only 30-some people to get cancer. Nevertheless, John Wayne always believed that his lung cancer had been caused by his smoking habit and not the nuclear fallout.

-Jet Pilot, another Howard Hughes' production mentioned in Wayne's letter, was filmed between December 1949 and February 1950. It wasn't released, however, until 1957. By that time, Hughes had already sold RKO, and the film was released by Universal-International.