Like many Hollywood actors, Humphrey Bogart began his acting career on the stage. He appeared in 18 Broadway productions between 1922 and 1935, making his debut in the play Drifting. Bogie's early Broadway roles were mostly romantic juveniles in drawing-room comedies and he sometimes referred to them as his 'Tennis, anyone?' roles. In a 1948 interview he explained: "I used to play juveniles on Broadway and came bouncing into drawing rooms with a tennis racket under my arm and the line: 'Tennis anybody?' It was a stage trick to get some of the characters off the set so the plot could continue."
When the Great Depression hit and theatre attendance dropped, Bogart tried his luck in Hollywood. His first feature film was Up the River (1930) co-starring Spencer Tracy, followed by Bad Sister (1931) with Bette Davis. The early 1930s saw Bogart shuttling back and forth between Hollywood and the New York stage, and during that period he was also often out of work. 1935 proved a turning point in Bogart's career when he was offered the role of the escaped murderer Duke Mantee in Robert E. Sherwood's play The Petrified Forest. The play, which starred Leslie Howard in the leading role, was a big success, running for 197 performances at the Broadhurst Theatre in New York. The Petrified Forest would be Bogie's final stage appearance.
Warner Bros. bought the rights to The Petrified Forest and wanted Edward G. Robinson for the role of Duke Mantee but Leslie Howard, who held the production rights, wanted Bogie. For that purpose, Howard sent a telegram to Jack Warner which read: "Att: Jack Warner Insist Bogart Play Mantee No Bogart No Deal L.H." Bogart was cast, with the film proving his breakthrough in Hollywood. (The Petrified Forest, directed by Archie Mayo, was released in 1936, with Bette Davis co-starring with Howard and Bogart.) Having been friends with Howard ever since they played together on Broadway and grateful for everything Howard had done for him, in 1952 Bogart named his daughter Leslie Howard Bogart (Bogie's second child with wife Lauren Bacall), in honour of his friend who had died in a plane crash during WWII.
Humphrey Bogart wrote the following letter sometime in the late 1920s when he was still years away from becoming a famous movie star. At the time he was performing on the New York stage, although I'm not sure which play he was in. His letter is addressed to "Lyman", possibly Lyman Brown; Lyman and his brother Chamberlain were theater agents and producers of Broadway plays. 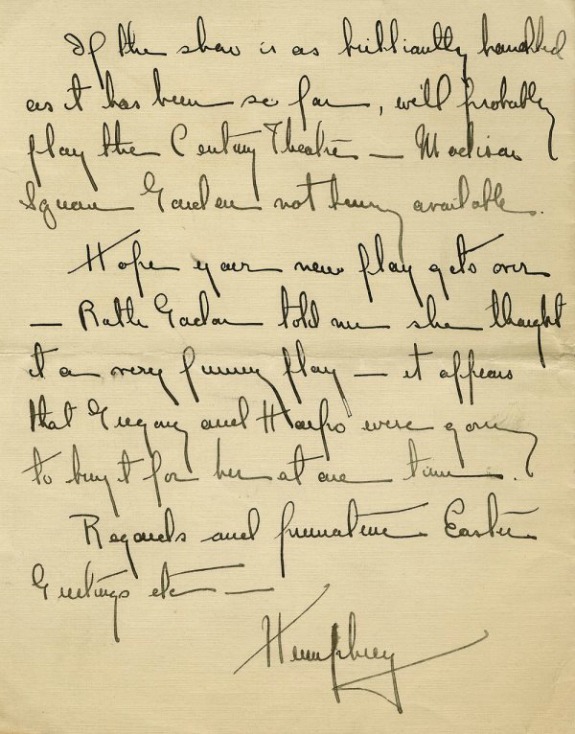 Source: liveauctioneers
Transcript:
March 15
Dear Lyman:
Am enclosing the notices for Washington and Boston.  Stopped in to say "Hello" on Monday but you were, as usual, out to lunch.
As far as I know we continue playing after a lay-off Holy Week; but have received no booking as yet.
If the show is as brilliantly handled as it has been so far, will probably play the Century Theatre – Madison Square Garden not being available.
Hope your new play gets over – Ruth Gordon told me she thought it a very funny play – it appears that Gregory and Harpo were going to buy it for her at one time.
Regards and premature Easter Greetings etc.
Humphrey
Posted by Clarissa Saunders
Tags: Humphrey Bogart