A bone to pick with Chaplin 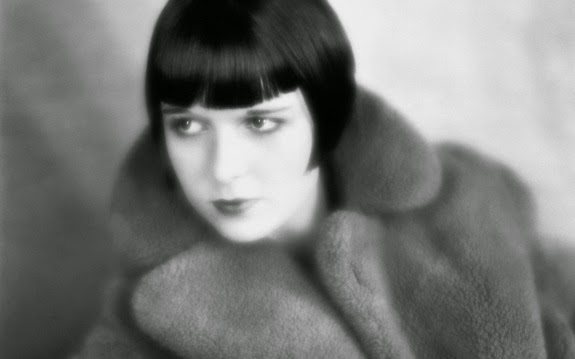 Louise Brooks and Charlie Chaplin had a love affair in New York during the summer of 1925. At the time, 18-year old Brooks was a chorus girl with the Ziegfeld Follies and had yet to make her film debut, while Chaplin --36 years old and married to Lita Grey-- was already a popular filmmaker (he was in New York for the premiere of The Gold Rush). Their intense love affair lasted for two months after which Brooks and Chaplin went their separate ways. Although Brooks' views on Chaplin were mostly positive throughout the years, in 1964 after reading Chaplin's autobiography she said some very nasty things about him (see the two letters below). By 1966, Brooks had changed her tune considerably, remembering Chaplin in an essay in "Film Culture" (read here).

Louise Brooks wrote the following letter about Charlie Chaplin to Frank (a friend?) on 27 November 1964. The letter is quite vicious but makes for a fascinating read. 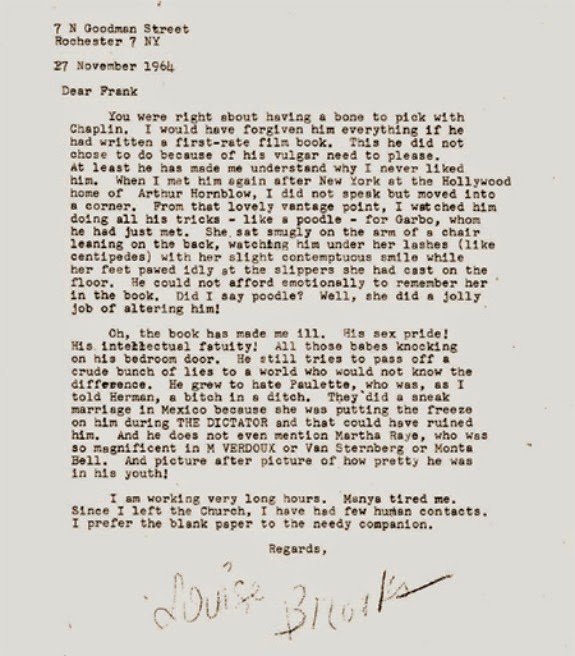 Via: the silent movie blog

You were right about having a bone to pick with Chaplin. I would have forgiven him everything if he had written a first-rate film book. This he did not chose [sic] to do because of his vulgar need to please. At least he has made me understand why I never liked him. When I met him again after New York at the Hollywood home of Arthur Hornblow, I did not speak but moved into a corner. From that lovely vantage point, I watched him doing all his tricks -like a poodle- for Garbo, whom he had just met. She sat smugly on the arm of a chair leaning on the back, watching him under her lashes (like centipedes) with her slight contemptuous smile while her feet pawed idly at the slippers she had cast on the floor. He could not afford emotionally to remember her in the book. Did I say poodle? Well, she did a jolly job of altering him.

Oh, the book has made me ill. His sex pride! His intellectual fatuity! All those babes knocking on his bedroom door. He still tries to pass off a crude bunch of lies to a world who would not know the difference. He grew to hate Paulette, who was, as I told Herman, a bitch in a ditch. They did a sneak marriage in Mexico because she was putting the freeze on him during THE DICTATOR and that could have ruined him. And he does not even mention Martha Raye, who was so magnificent in M VERDOUX or Von Sternberg or Monta Bell. And picture after picture of how pretty he was in his youth!

I am working very long hours. Manya tired me. Since I left the Church, I have had few human contacts. I prefer the blank paper to the needy companion.

And this is an excerpt from a letter by Brooks written to a woman named Dorothy. The letter is undated but was also written after the publication of Chaplin's autobiography in 1964. 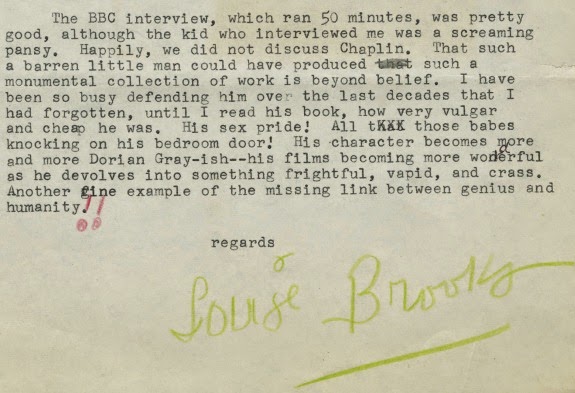 The BBC interview, which ran 50 minutes, was pretty good, although the kid who interviewed me was a screaming pansy. Happily, we did not discuss Chaplin. That such a barren little man could have produced [redacted] such a monumental collection of work is beyond belief. I have been so busy defending him over the last decades that I had forgotten, until I read his book, how very vulgar and cheap he was. His sex pride! All [redacted] those babes knocking on his bedroom door! His character becomes more and more Dorian Gray-ish-- his films becoming more wonderful as he devolves into something frightful, vapid, and crass. Another fine example of the missing link between genius and humanity!!