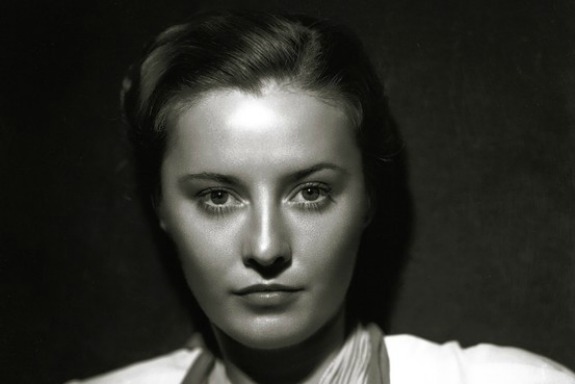 The incomparable Barbara Stanwyck was an actress everybody loved to work with. She was a favourite with directors, fellow actors, and even crews and extras. Frank Capra, who had directed her in five films, once stated that "in a Hollywood popularity contest she would win first prize hands down".

Barbara was the consummate professional-- always on time and fully prepared, never complaining, and always ready to support her colleagues (for example, during the filming of Golden Boy (1939) she defended a young, insecure William Holden to studio boss Harry Cohn, who was about to fire him). Cecil B. DeMille once said that he had never worked with an actress who was "more co-operative, less temperamental and a better workman"; Lewis Milestone was impressed with her technical savvy and said that "she astonished everybody with her knowledge of lighting"; and Mitchell Leisen called her "the greatest" and said that "everybody worked harder, trying to outdo her." 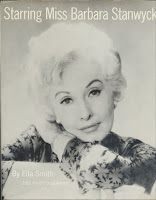 And there were many others who respected and admired her. The four letters for this post show that also John Sturges, Fredric March, Gilbert Roland and Fletcher Markle, who had all worked with Barbara, commended her for her professionalism. Their letters, written in 1972, were addressed to Ella Smith, who was then preparing her biography about Barbara. Entitled Starring Miss Barbara Stanwyck, Smith's wonderful book was published in 1973.


The first letter shown below was written by director John Sturges who had worked with "Missy" (as he and other colleagues lovingly called her) on Jeopardy (1953). I love the last paragraph in which he explains how Barbara had learned to move the way she did. 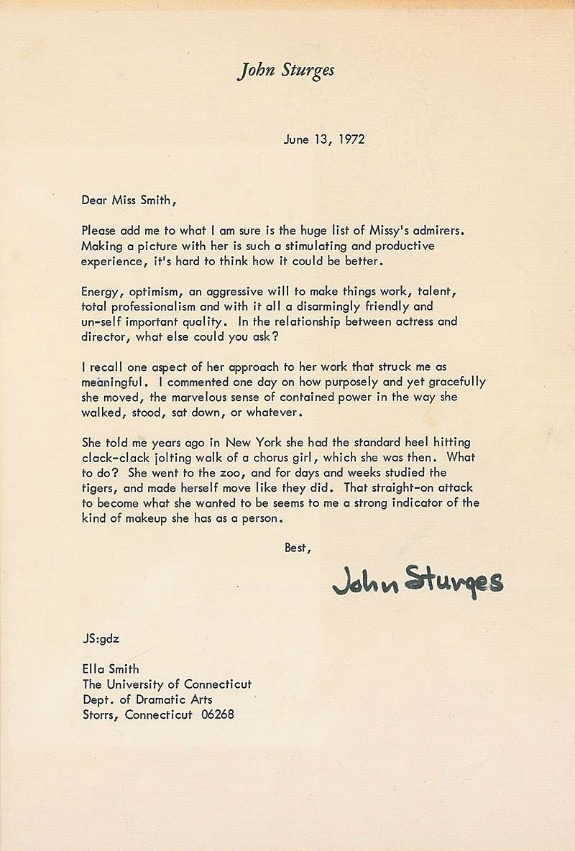 Please add me to what I am sure is the huge list of Missy's admirers. Making a picture with her is such a stimulating and productive experience, it's hard to think how it could be better.

Energy, optimism, an aggressive will to make things work, talent, total professionalism and with it all a disarmingly friendly and un-self important quality. In the relationship between actress and director, what else could you ask?

I recall one aspect of her approach to her work that struck me as meaningful. I commented one day on how purposefully and yet gracefully she moved, the marvelous sense of contained power in the way she walked, stood, sat down, or whatever.

She told me years ago in New York that she had the standard heel hitting clack-clack jolting walk of a chorus girl, which she was then. What to do? She went to the zoo, and for days and weeks studied the tigers, and made herself move like they did. That straight-on attack to become what she wanted to be seems to me a strong indicator of the kind of makeup she has as a person.

The second letter is from Fredric March who worked with Barbara on the 1954 Executive Suite. 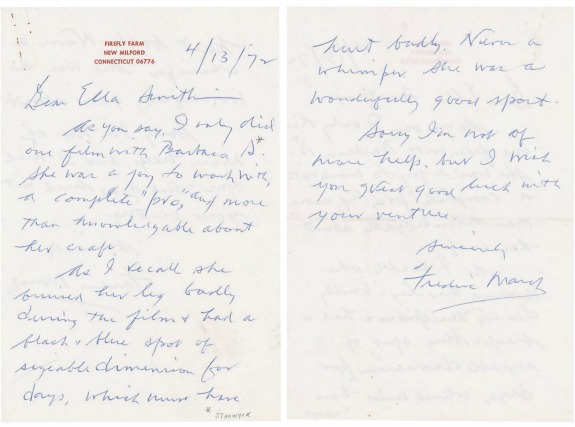 As you say, I only did one film with Barbara S*. She was a joy to work with, a complete "pro", and more than knowledgeable about her craft.
As I recall she bruised her leg badly during the film + had a black n blue spot of sizeable dimension for days, which must have hurt badly. Never a whimper. She was a wonderfully good sport.
Sorry I'm not of more help, but I wish you great good luck with your venture. 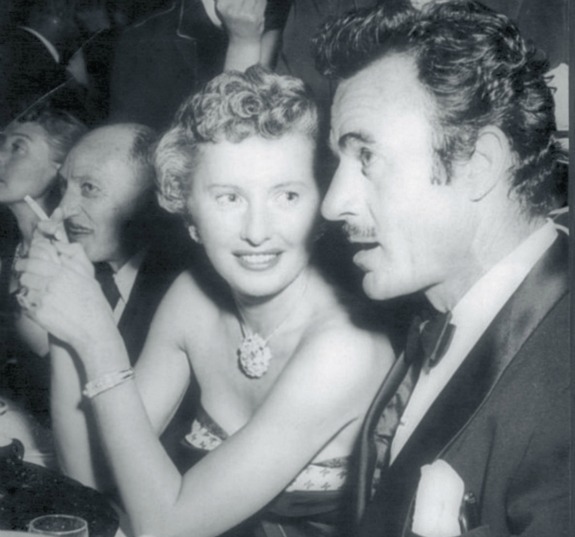 The following letter is from Gilbert Roland who worked with Barbara on two films, The Other Love (1947) and The Furies (1950). 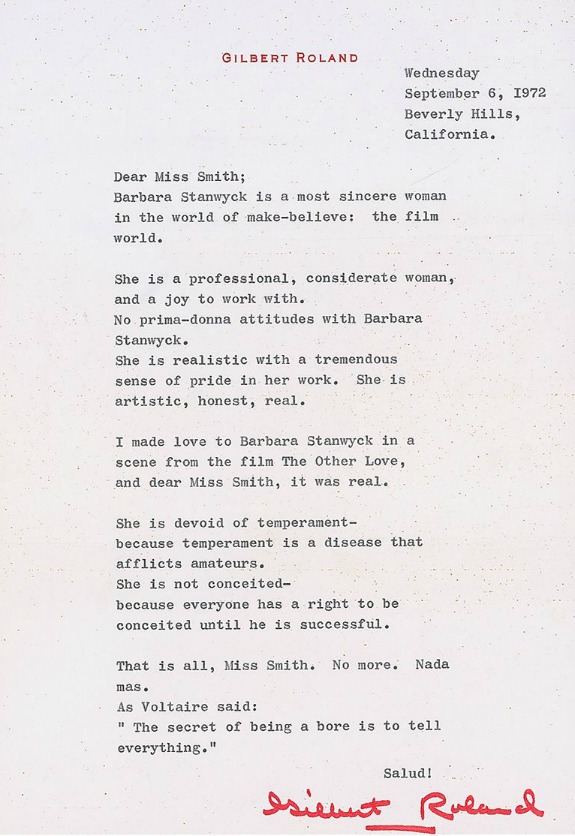 Barbara Stanwyck is a most sincere woman in the world of make-believe: the film world.

She is a professional, considerate woman, and a joy to work with.
No prima-donna attitudes with Barbara Stanwyck.
She is realistic with a tremendous sense of pride in her work. She is artistic, honest, real.

I made love to Barbara Stanwyck in a scene from the film The Other Love, and dear Miss Smith, it was real.

She is devoid of temperament- because temperament is a disease that afflicts amateurs.
She is not conceited-
because everyone has a right to be conceited until he is successful.

That is all, Miss Smith. No more. Nada mas.
As Voltaire said:
"The secret of being a bore is to tell everything."

And finally, this is the part of Fletcher Markle's letter where he writes about his collaboration with Barbara; Markle had directed her in The Man with a Cloak (1951). 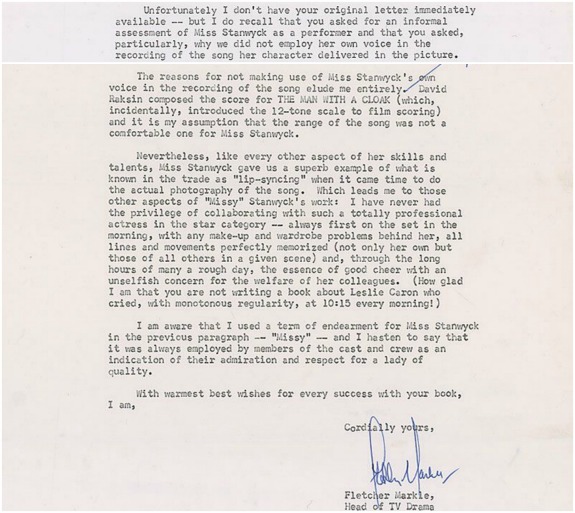 Unfortunately I don't have your original letter immediately available-- but I do recall that you asked for an informal assessment of Miss Stanwyck as a performer and that you asked, particularly, why we did not employ her own voice in the recording of the song her character delivered in the picture.

The reason for not making use of Miss Stanwyck's own voice in the recording of the song elude me entirely. David Raksin composed the sore for THE MAN WITH A CLOAK (which, incidentally, introduced the 12-tone scale to film scoring) and it is my assumption that the range of the song was not a comfortable one for Miss Stanwyck.

Nevertheless, like every other aspect of her skills and talents, Miss Stanwyck gave us a superb example of what is known in the trade as "lip-syncing" when it came time to do the actual photography of the song. Which leads me to those other aspects of "Missy" Stanwyck's work: I have never had the privilege of collaborating with such a totally professional actress in the star category-- always first on the set in the morning, with any make-up and wardrobe problems behind her, all lines and movements perfectly memorized (not only her own but those of all others in a given scene) and, through the long hours of many a rough day, the essence of good cheer with an unselfish concern for the welfare of her colleagues. (How glad I am that you are not writing a book about Leslie Caron who cried, with monotonous regularity, at 10:15 every morning!)

I am aware that I used a term of endearment for Miss Stanwyck in the previous paragraph-- "Missy"-- and I hasten to say that it was always employed by members of the cast and crew as an indication of their admiration and respect for a lady of quality.

With warmest best wishes for every success with your book, I am,